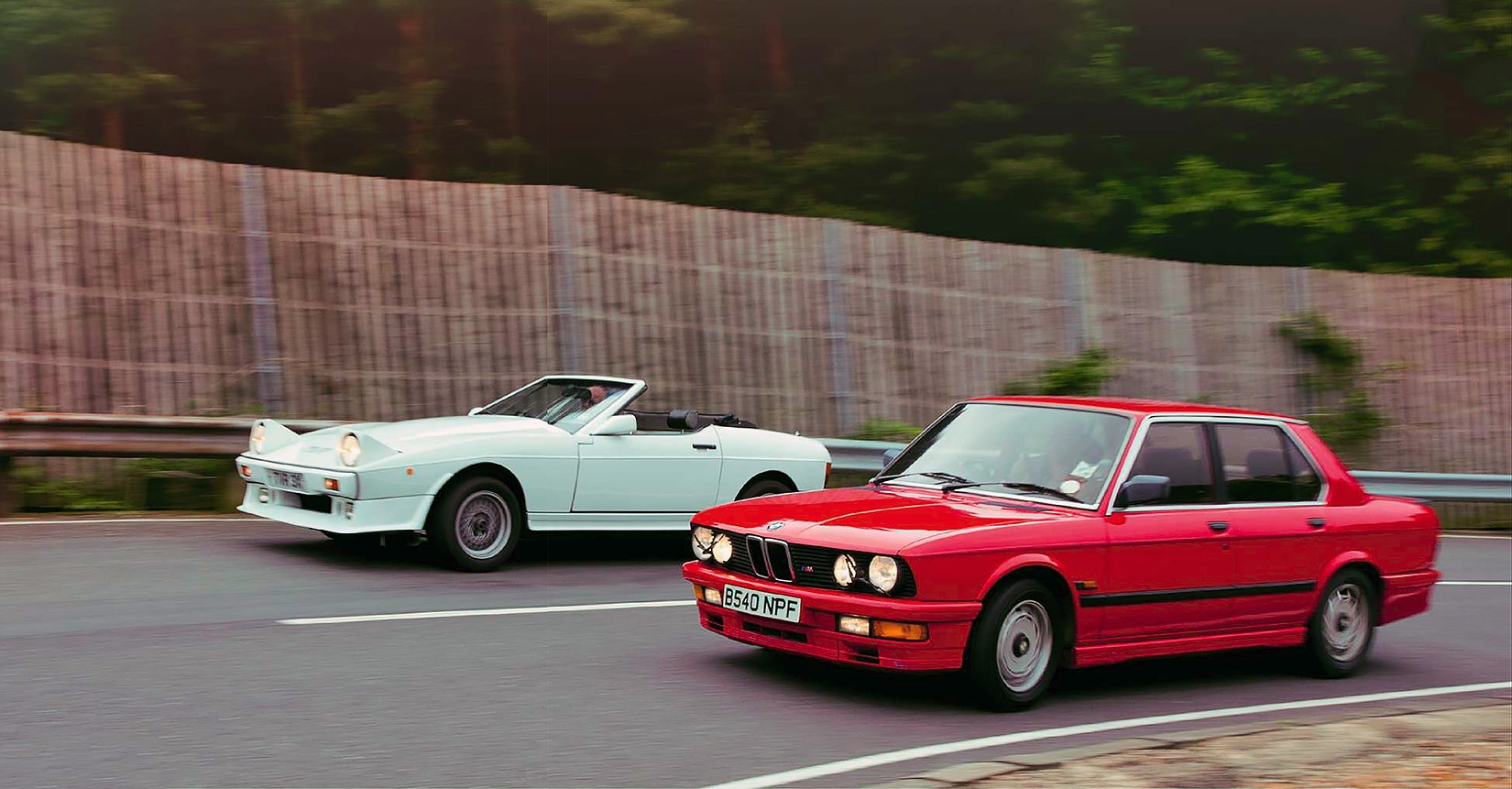 BMW M535i E28 1984 Test-Drive. Of all the cars here, the M535i most strongly demonstrates the difference in tastes between the Seventies and Eighties. In the previous decade it was comfort and luxury that sold cars. Buyers aspired to loll on the squashy leather of a Jaguar or Cadillac, and if a Ford or Vauxhall wanted to convey an upmarket air, its interior would be adorned with chrome, fake woodgrain, stainless steel trim and enamel badges. BMW watched forlornly as its saloons were made to look ascetic and overpriced by raffish Triumph 2500s and Rover P6s with interiors like a bank manager’s office. BMW could talk all it liked about reliability and fine handling, but its seats were hard and its dashboards looked like plastic stationery.

And in 1984 the newly fuel-injected E28 5-series range was topped not by a luxury car but one devised by BMW’s Motorsport division, with a de-catalysed 3.5-litre straight-six. And unlike its Seventies E12 predecessor, this M535i sold in volume – more than 10,000 in under four years. In the Eighties it seemed sybaritic comfort had been trumped by sportiness. BMW didn’t bother selling the standard 535i in Britain, such was the M’s popularity.

Such was the appeal of that M-badge, the standard 535i wasn’t even offered in the UK

Jump into the M535i today and it feels as basic as a Nineties supermini, with featureless, black plastic door cards and a centre console livened only by the flamboyant optional Blaupunkt graphic equalizer on its flexible stalk. But the Motorsport-designed seats with their adjustable bolsters clamp me into a slightly reclined driving position. As I adjust the seat to reach the pedals, I find my arms bending slightly, the gearlever not much more than a handspan from the wheelrim. As with the Peugeot 205 GTi, this is an interior that forces you to sit like a racing driver.

The M535i doesn’t bark its intent, opting for an innocuous thrum at idle instead, making me wonder whether its jutting bodykit and CM’ badges are all for show. Once it’s moving, it doesn’t take long to realise that the M535i is as complete and integrated a sports car as the little Peugeot.

The ride quality is the first clue. It’s taut, fidgeting slightly over ripples in the tarmac, but never feels hard; and it doesn’t wallow or lean heavily like most saloons of this size did in the late Seventies. Turn in hard, and the nose dives and lurches urgently. It doesn’t feel as nervous as the 205, but it conveys authority and decisiveness.

It delivers its 218bhp subtly and smoothly, a slick gearchange informing the driving style. It feels most rewarding on the Millbrook test track’s Alpine route, especially when I take racing lines through the corners. Avoid braking, dance the BMW to the corners’ rhythm, and the revs climb unawares. The engine note gives off a combination of muted induction snort and silken drone at all times, to the point where it’s unfazed when encroaching on 5000rpm, sweeping through bends at 50mph in third gear in a manner that would send most Seventies saloons skittering into the bushes.

‘Its legacy is its combination of superior cornering poise, refinement in extremis and impressive motorway cruising ability’

It’s thanks to a chassis balance that’s just as exquisite as the 205 GTi’s, and it’s most noticeable in tight hairpin bands. There’s a warning of understeer from the Michelin TRXs but, as with the MR2, the M535i can be steered on its throttle in such a benign way that it isn’t intimidating. Weight distribution is 52/48 front/rear – almost perfect, especially for a front-engined, rear-drive car without a transaxle gearbox. The 24-valve M5, released the following year, relocated its battery to the boot in search of a 50/50 balance. The M535i’s only weak aspect is its brakes, the long-travel pedal needing a sustained shove rather than the firm tap I anticipated.

But the M535i’s legacy is surely its combination of superior cornering poise, refinement in extremis and impressive motorway- cruising ability. Back in the Seventies, car magazines would talk vaguely about ‘large saloons’. Nowadays, the phrase ‘5-series class’ is used colloquially when discussing cars of this size. Its all-rounder qualities are expected, to the point where those who can’t deliver needn’t bother applying – as Jaguar, Lexus and Rover all discovered to their cost in the Nineties.

The E28 M535i is more than just an excellent GT. It marks the moment when the decadent mindset of the Seventies died. The old aspirational saloons that the BMW obliterated belonged to a dozy world of unfiltered, high-tar cigarettes, socially acceptable drink- driving and endless board meetings. The M535i represented a more disciplined, if slightly emotionless culture that went jogging in the morning, worked 12-hour days and drank Lucozade by the gallon when it was relaunched as an energy drink in 1983. We’re still there today.

‘So long as they’re not rusty they’re unbreakable,’ says Motodrome’s Simon. The only real weakness is that they’re under-braked, but it’s fairly easy to upgrade both E28 5-series and the mechanically identical E24 6-series to take the brakes from an E32 7-series.

‘I’ve run and dealt in E28s or E24s on and off for the past 20 years. They’re superb motorway cruisers. I’m selling this one, plus an automatic 635CSi that I’ve been running around in, but I’ll be reluctant to see it go. The M535i E28 is very underrated – it’s worth a quarter of an M5 and half a 635CSi, but performance-wise they’re actually very close, especially on real-world roads. I can’t see them staying this cheap much longer.’