Tucked away in a small workshop deep in Worcestershire’s scenic countryside lies one man on a rather ambitious mission. 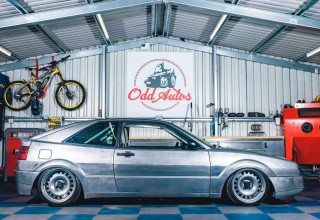 Paul Bird from the legendary Odd Autos is the protagonist in question, and his motives stem from a desire to bring some life back into the modified car world and illustrate that a winning show vehicle needn’t revolve around priceless split rims and bank-breaking air suspension kits.

We’re pleased to reveal the fruits of Paul’s labour so far: this frankly bonkers ‘naked’ Corrado G60 that’s living proof you needn’t re-mortgage your house to get noticed on the show scene. In fact, all it takes is a little elbow grease and the desire to go slightly crazy, as we’re about to find out…

Most people believe expensive wheels, suspension or other high-priced parts are what you need for a show-stopping build!

Odd Autos is no stranger to unusual VW builds (the clue’s kinda in the name). In fact, avid PVW readers might already be familiar with Paul’s magic touch from some of his previous creations that’ve made it onto these very pages; not least the red Mk2 ‘Shorty’ or the stubby New Beetle rag that followed it.

“I bought my 30th car the other day… I haven’t got anywhere to keep them all anymore!” Paul grins as he sheds a little more light on his impressive home setup – the clinical garage of Odd Autos more often than not housing one or two of his own whacky personal projects. An advocate for doing things himself and teaching others how they can do the same (something which has recently pushed him on to spawn his own informative YouTube channel and even appear as a technical expert on TV shows), it’s Paul’s refreshing attitude that saw the birth of this unforgettable Corrado over the winter of 2018.

They parked me up next to a car that had £4000 wheels, and you can probably guess which one got more attention 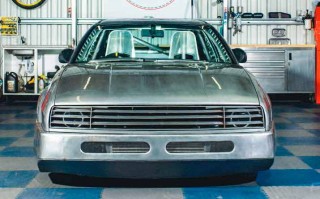 “I’ve been to many shows in the past and it seems to me that most people believe that very expensive wheels, expensive suspension or other high-priced parts fitted to their car are what you need for a show-stopping build,” he tells us with a grimace. “The aim of the Corrado project was to build something with my own hands for under the price of what some will spend on wheels alone, so I gave myself a budget of £4000 for the total build…”

We told you it was an ambitious task, with the pressure piled on even more with a phone call from the Essen Motor Show confirming that the team there were confidently keeping a spot free for him in the Tuning Hall to reveal his work to the masses.

With the Germany-based event scheduled for the end of November, this gave Paul less than two months to whip something up that would get his message out there with a bang. But luckily, he had just the base vehicle in mind for the job…

“I had this Corrado G60 lying around,” he continues the tale. “Although it was a real G60, it was a bit ropey and had some questionable mods on it when I bought it. I restored it back to original in the anticipation of selling it on, but it turns out the paint was so bad, no one was interested.” 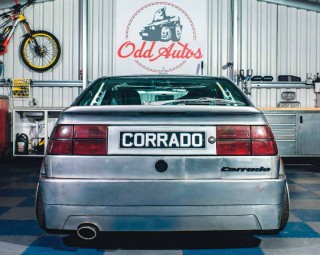 He’d already gone so far with this example of VW’s ‘90s sports coupé, Paul couldn’t bear to break it down for parts at this stage. And with the horrific state of the car’s current paint meaning it wouldn’t be seen as sacrilege to try something a little different with it, a radical 43-day plan was soon put together on the ‘projects to-do’ whiteboard hanging up in his conservatory.

“The Corrado is steel all over from the factory, apart from the bumpers,” Paul says.

“I liked the idea of a fully bare-metal build and thought it’d be a great way of making the car look different for cheap, but didn’t want to skimp out and simply add a metal-effect vinyl wrap.” Soon tracking down some trick ‘direct-to-metal’ clear-finish paint that uses acids to bypass the need for primer or lacquer to be applied, Paul bit the bullet and began rubbing back those multiple shonky paint jobs, keen to discover the condition of the car’s shell underneath.

“It was clear it’d had a smash near the rear driver’s wheel at some point, and there was also a hole in the rear slam panel,” Paul reveals the extent of the bodywork tasks that’d have to be undertaken. “I’m no master fabricator but thought I’d give it a good go! It’s hard to weld things neatly and also not use any filler along the way, but I got there eventually.”

Next obtaining quotes from fabrication companies to put together some steel bumpers that followed the shape of the car’s factory plastic affairs proved disheartening in both time and money senses. So Paul enlisted the help of a good friend to make them at the workshop instead. Each bumper took a week and a half of painstaking welding and beating to get just right, but it was soon time for that clever clear paint to be applied to the entire body.

I liked the idea of a bare-metal build, but didn’t want to skimp out and simply add a metal-effect vinyl wrap 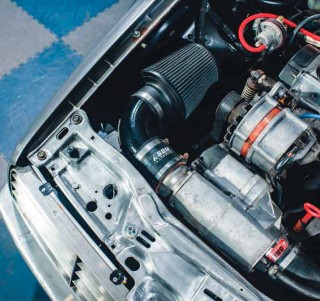 “I sprayed the car in a dusty barn, and all-in-all, this process cost me no more than £400,” he gleams, clearly as impressed with the result as we are. This same winning formula was applied to components such as the banded steel wheels and windscreen wiper arms (after their powdercoated finishes were painfully removed), before Paul could really start to focus on the fun smaller touches that would set off the car’s now incredible body.

Touches such as that steel front grille, for instance, which spans the entire width of the car with some HID headlights tucked away behind in an epic Dodge Charger-esque fashion (“I bought a £90 tool to bend the metal so the grille flows nicely with the car – that was a bargain!”), as well as the KNTRL air suspension system that allows a superb ride height to be achieved on those wide rims (“I was going to keep the budget low and remain static here, but I didn’t want to risk damaging the paint on speedbumps and our terrible British roads”).

Inside, the theme of ‘bare steel’ unsurprisingly continues in a comprehensive manner, with custom-fabricated parts such as the door cards, boot floor and heavily-gusseted roll cage tying in nicely to that brushed steel air suspension tank and sparse Kirkey aluminium bucket seats up front – all tweaks that make the Corrado’s factory plastic dashboard and that OMP suede steering wheel seem relatively plush luxuries. It’s worth pointing out that that blown 1.8- litre four pot under the bonnet hasn’t been left untouched, either; being fully forged and receiving a tweaked Stage 4 supercharger from its previous owner, meaning there’s grunt to match those insane Tron-style looks.

“I was supposed to be at Essen at 8:30am, and actually got there at 10am, which I didn’t think was bad going,” Paul recalls. “They parked me up next to a car that had £4000 wheels, and you can probably guess which one got more attention. I mean which would you prefer for £4000… just some wheels or a whole car?!”

Now we’ve had time to soak up all of its incredible details, can we pinpoint exactly what it is about Paul’s Corrado that makes it so damn special? That beautifully patina’d one-off steel bodywork, perhaps? Or the fact that many have mistaken it for a DeLorean on its travels?

No. The main reason for its royalty status on the scene is for the message it now oozes from every single pore. A message we think Paul himself puts best: “My aim is for people to just have a go and try things themselves. The hardest part of any car build is to keep going and get it finished, even if it takes you years. So buy a cheap grinder and a welder and get stuck in!” 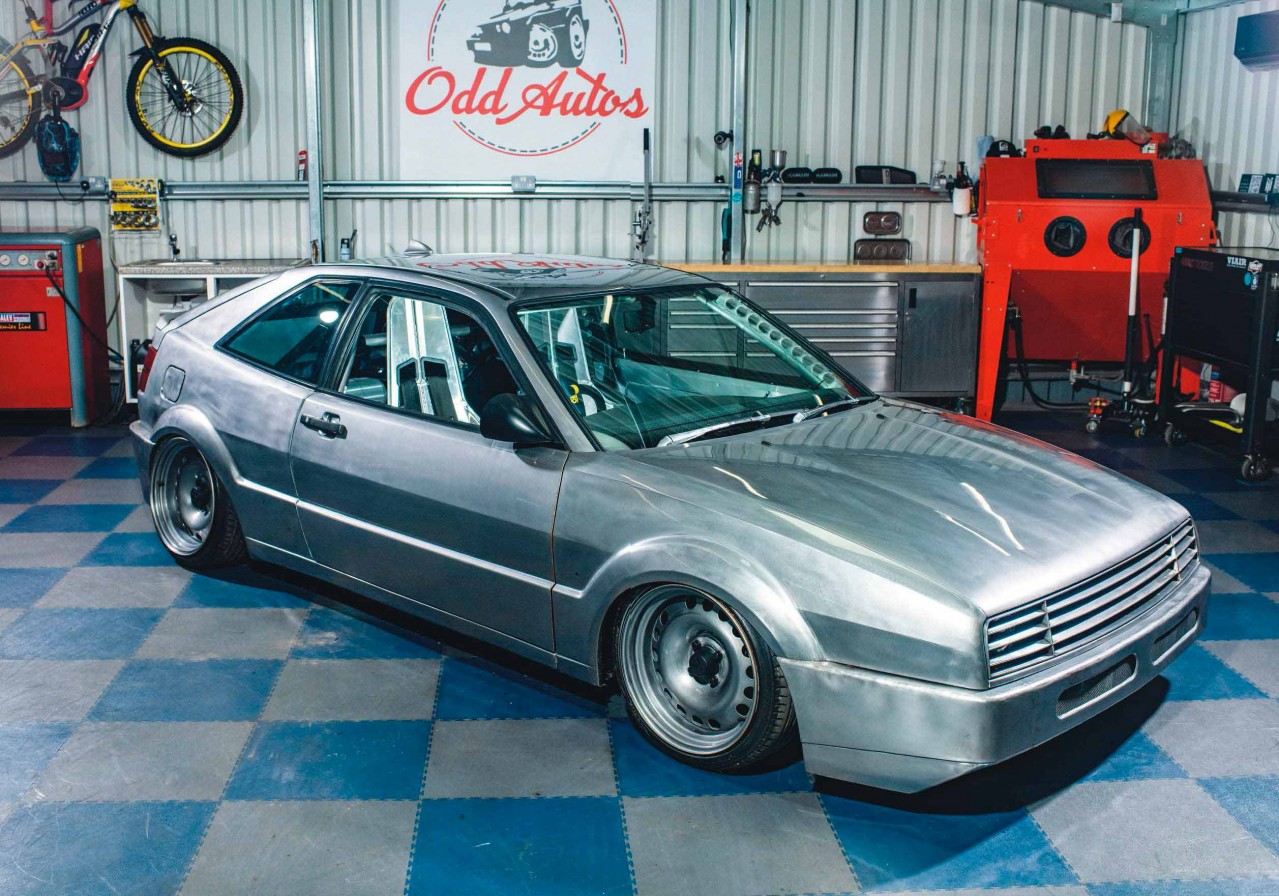 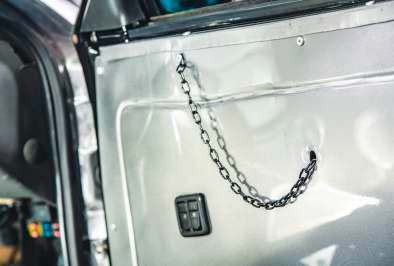 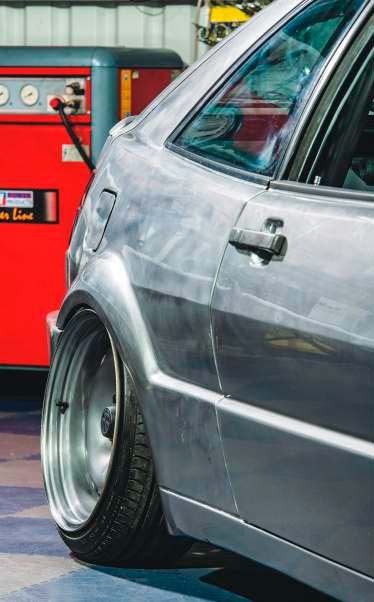 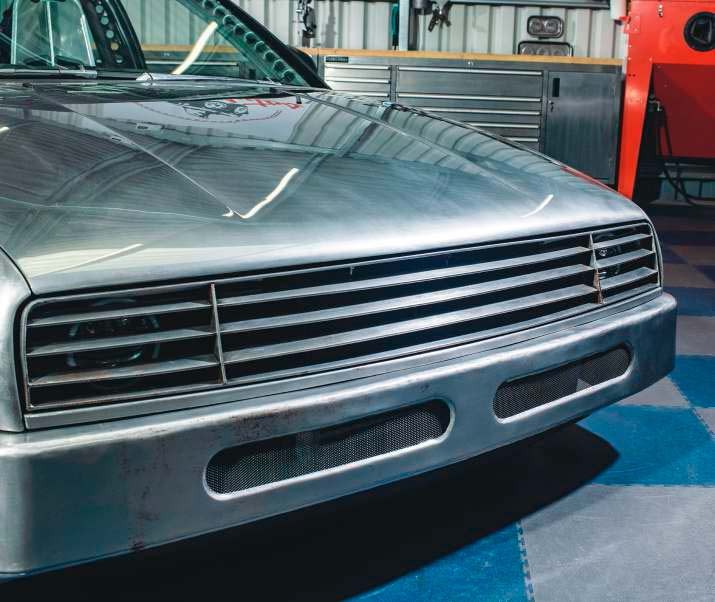 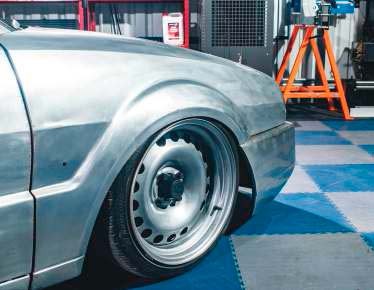 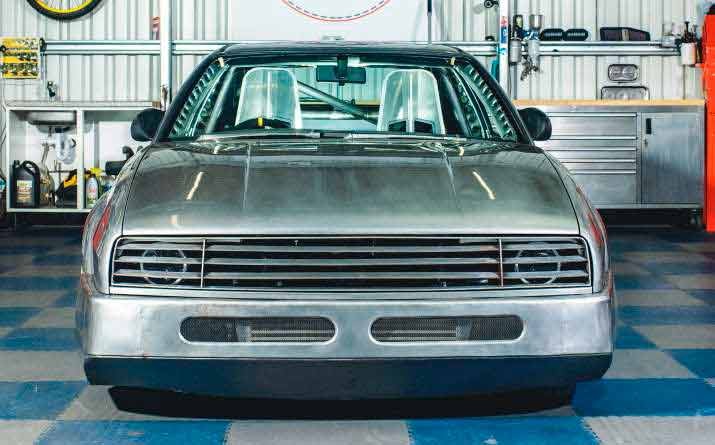 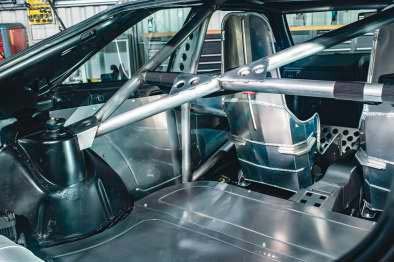 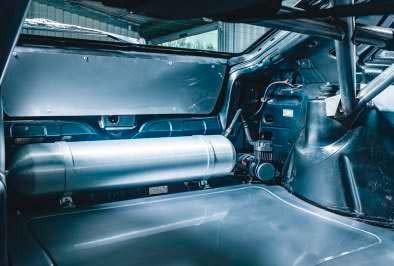 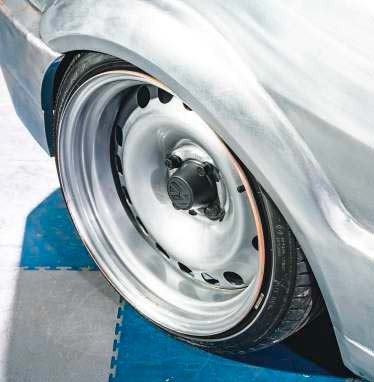 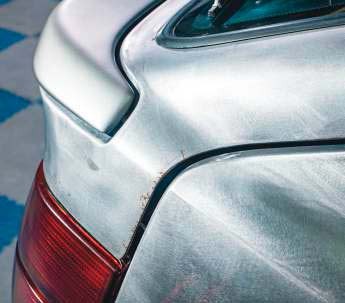 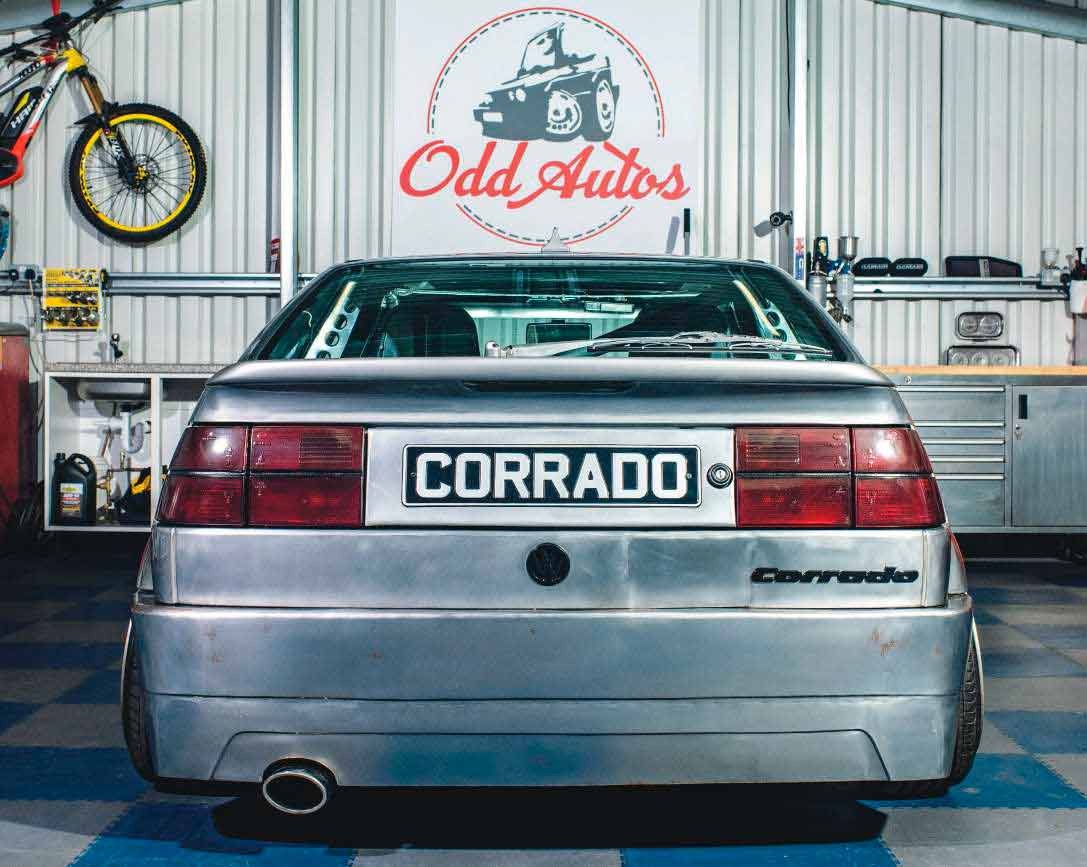 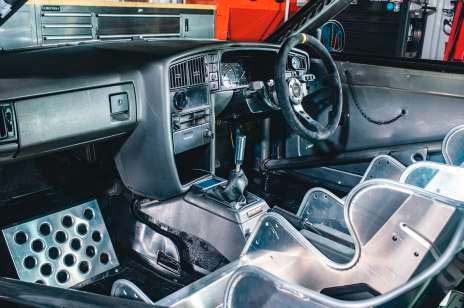 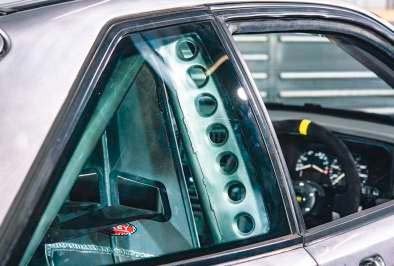 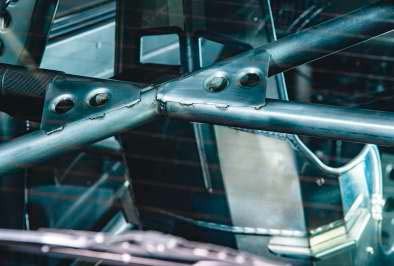 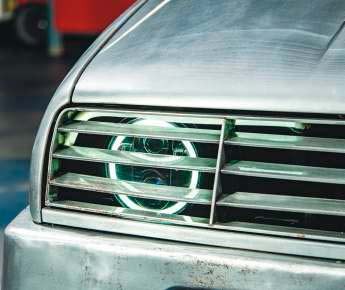 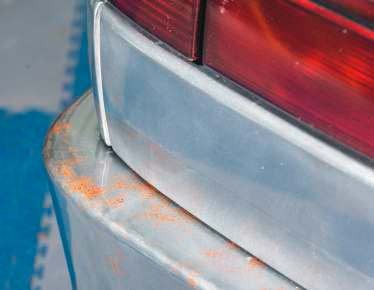 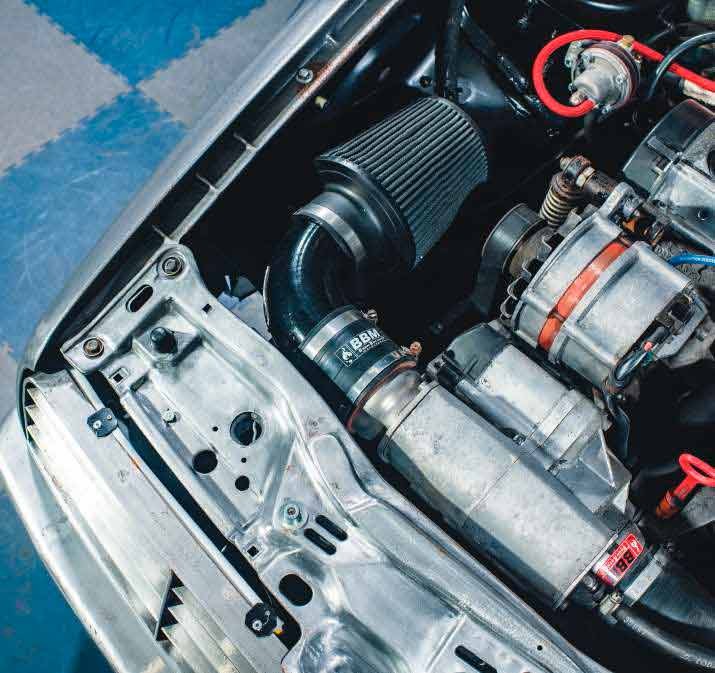 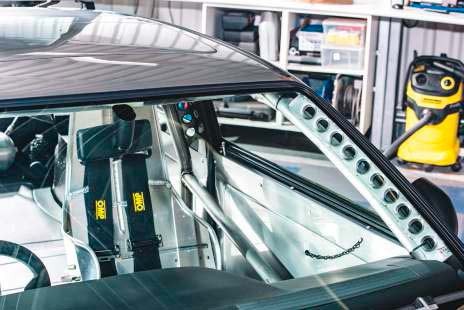 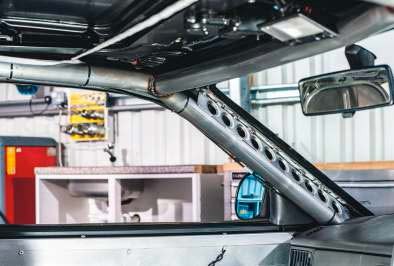 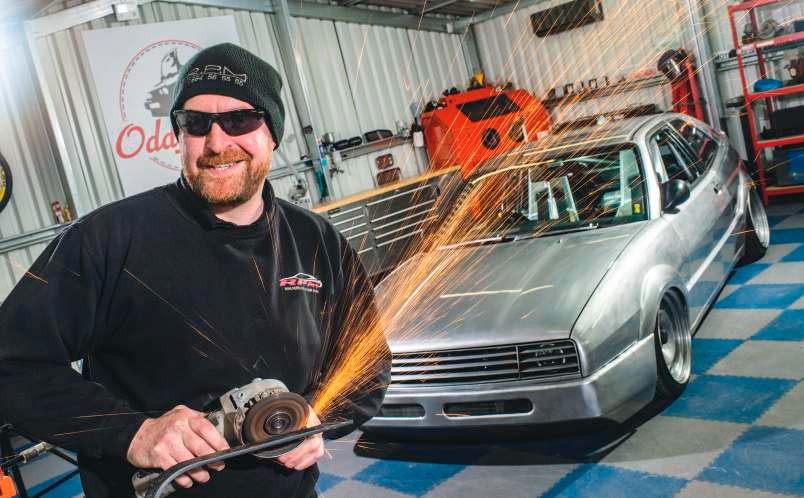 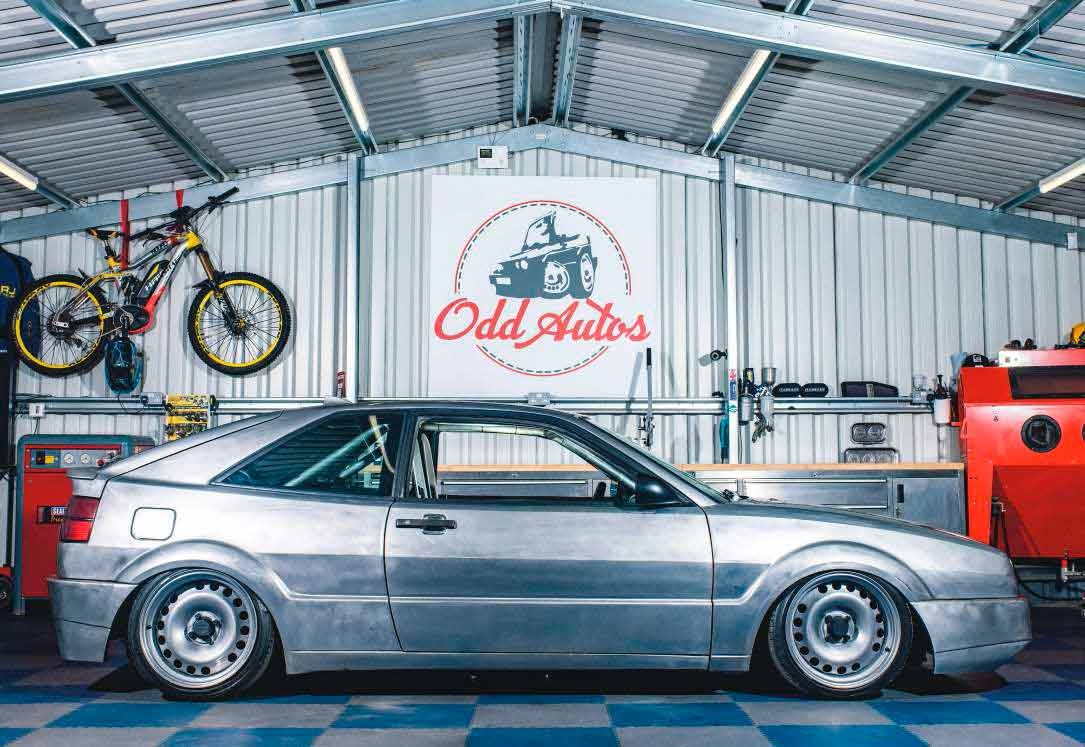 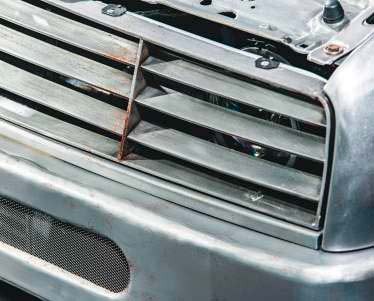 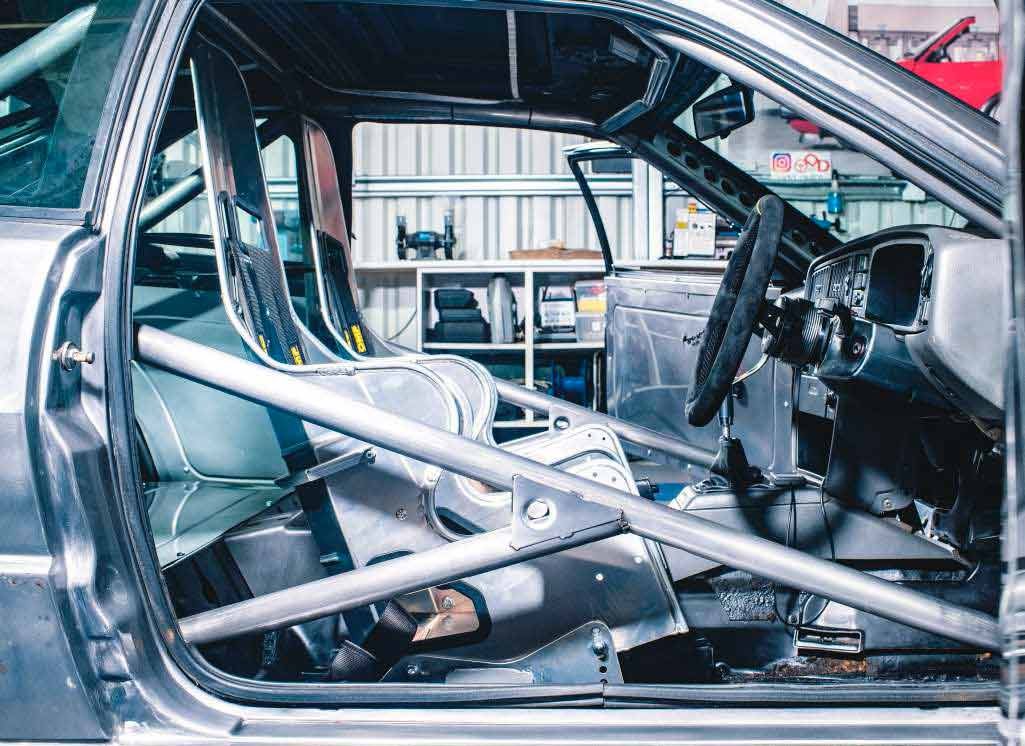 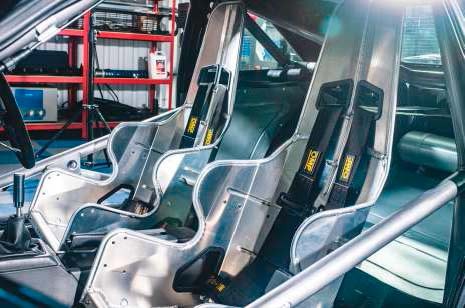 So many people would have failed getting this right, but Paul just makes it look easy…

It’s all well and good having an eye for detail, but being able to carry out the work too is an art in itself.