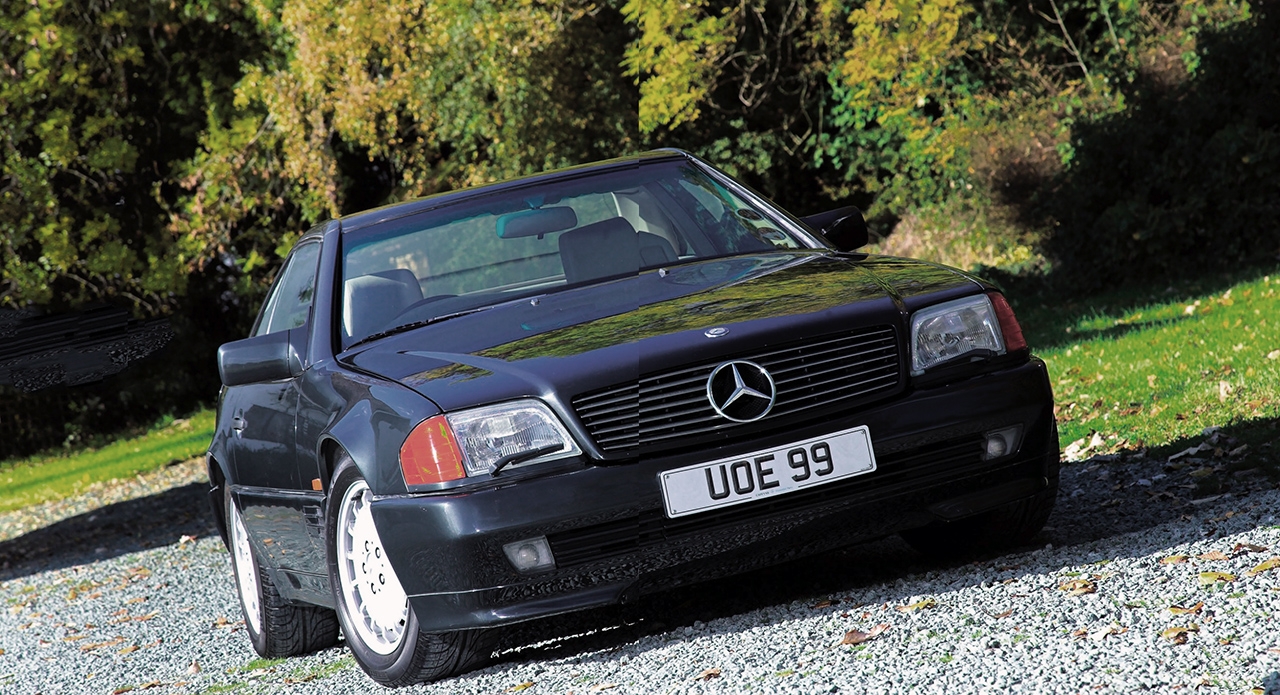 Modern age Mercedes-Benz 500SL R129 1989-2001 – the long awaited was ail new as Mercedes ever allowed itself to go when introducing a fresh model. It lacks the elegant style of its predecessors, but the R129, launched 25 years ago, was packed with technology, which made it the most sophisticated roadster of its day, says former 500SL owner Martin Buckley. With Pagodas W113 going stratospheric in price, and even R107s firming up strongly R129s seem curiously under appreciated.

Has there ever been a better value classic Mercedes roadster than the 1989 to 2001 R129 SL? Prices are bottoming out at as little as £1,500, and while no one would expect one at that level to be a lot of laughs, for as little as £5,000 you can still buy a really very nice car with all the history and reassurances of careful ownership you could ever wish for. 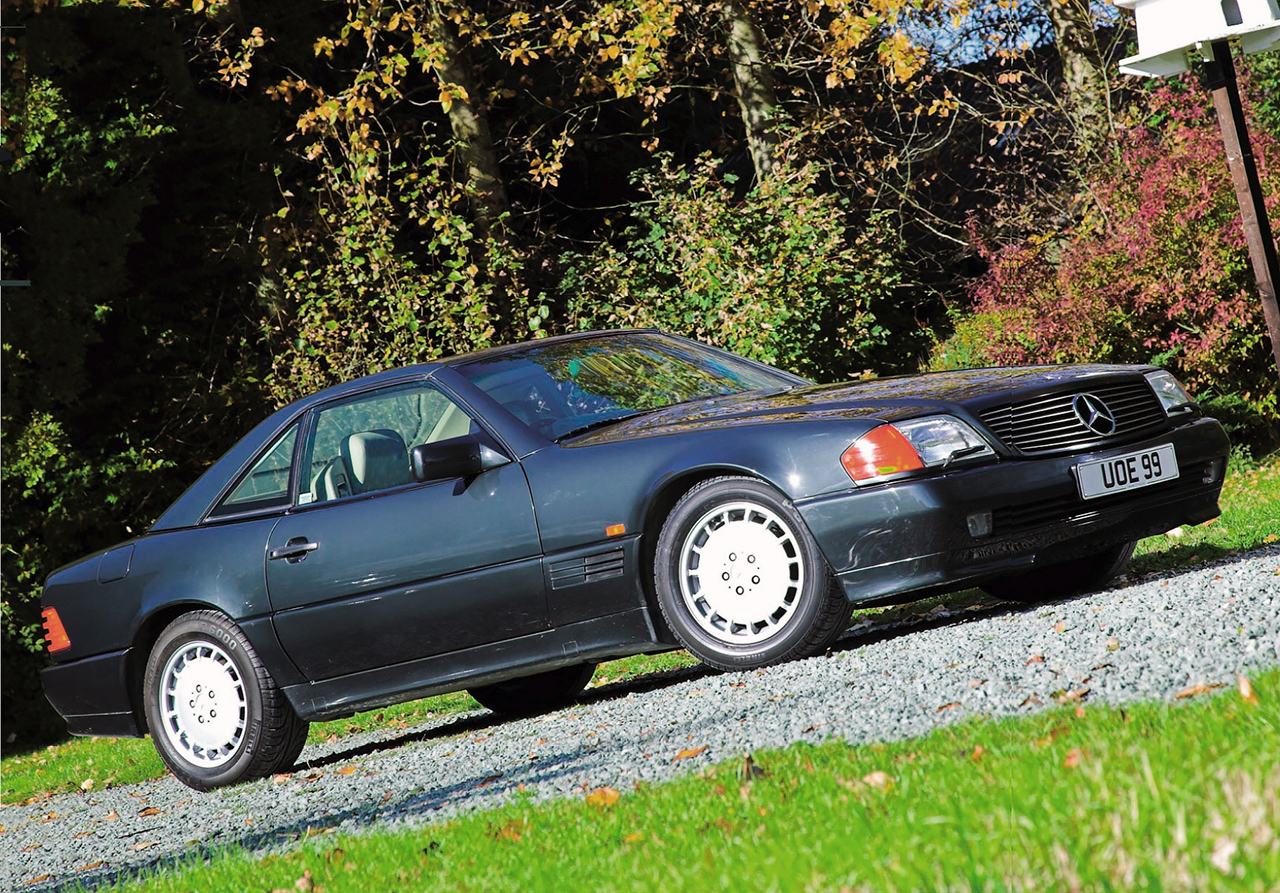 I can say that with confidence because I have done it myself- twice, in fact, both times with really clean 500SLs that drove beautifully and never had a major problem. Both were low-mileage examples that had spent most of their lives probably cosseted, garaged and regularly serviced – and certainly never raced or rallied. There are still many such SLs to be found for a fraction of the £50,000, £60,000 or even £70,000-plus they cost their first owners.

With Pagodas going stratospheric in price, and even R107s firming up strongly, R129s seem curiously under appreciated, although it is not difficult to see one thing that is holding them back. There are simply too many left out of the 204,900 that were built over a dozen years.

There have been two subsequent generations of SL, making Bruno Sacco’s crisp-edged shape look increasingly dated in Mercedes terms, although once the tired looking examples (that are starting to appear in increasing numbers) have been sifted out by a natural process of attrition, we may have a different perspective on it. As things stand, however, bereft of chrome, it is admittedly harder to pigeonhole the R129 as ‘classic’ than it is the R107.

Designed in the mid-1980s on a shortened 124-series platform, in engineering terms this generation of SL represented a huge improvement over the previous R107 SL, which was a late 1960s design introduced in 1971.

The R107’s continued popularity, and the cost of tooling up for a replacement which in general terms would sell in relatively small numbers compared to its saloon counterparts, had dissuaded the car maker from replacing it sooner. But the long-awaited R129 was as ‘all new’ as Mercedes ever allowed itself to go when introducing a fresh model. There were no ‘poverty’ versions of the new SL, although if you insisted a manual gearbox was available in the six-cylinder models. All cars had climate control, electric windows, full leather and anti-lock brakes as standard, as well as airbags and the latest restraint systems, ASR anti-skid and even adaptive damping in some variants.

In fact, this new SL wonder car had a power hood and all kinds of refinements and driver aids that made it the most complete and thoroughly engineered roadster on the market, and also a hugely safe one that even included a roll bar that popped up automatically if it sensed the car was about to flip. You would need to be trying hard to get it to that stage, however, its multi-link rear suspension giving the R129 a tenacious poise its predecessor had never known.

Throughout production, V8s and V12s were always automatic, four-speed through to 1995, electronic five-speed thereafter.

For 1994 the range was facelifted. Also, the SL moniker now prefixed the engine size indication (so that the 500SL, for instance, became the SL500) and the three-litre engines were replaced by new 2.8-and 3.2-litre straight-sixes, creating the SL280 and SL320 models.

Litter there was even a variety of special edition R129s, something that had been beneath the dignity of Mercedes in earlier times, but was now felt necessary to help sell the car, particularly as it became an elder statesman in the range in the late 1990s and early 2000s. The Mille Miglia Limited edition commemorated Stirling Mosss win in the famous endurance event in 1955, while the Silver Arrow alluded to the Mercedes grand prix cars of the 1930s and 1950s. The changes only amounted to minor trim, paint and road wheel differences. Nothing to get too excited about, although I always quite fancied the panoramic glass roof offered in 1997, towards the end of production.

The R129 feels expensive, and also makes you feel special. It is pretty quick, but never intimidating to drive, and with the roof on it is like a compact two-door saloon with little appreciable wind noise – and no leaks. Despite its tiny rear seats you could use it even- day like a normal car it being one of the most practical roadsters of its time.

I wouldn’t dismiss a six-cylinder. But at the same time I fail to see the point of them when the big V8 is so delightfully and effortlessly quick and, driven sensibly, can give fuel consumption in the high 20s.

I always think the 500SL is a bit ‘girly’, but I like it anyway. I love the power seats, the smooth action of the fully automated power hood, and the way the car was ready to take the world on from the moment you flick the key. It feels hefty and it is, at 1,890kg, but that only adds to the sense of security. Modern drivers might think the steering-still a rather old-fashioned box rather than a rack-and-pinion system – vague, but the way the car digs in and fires you out of cornel’s is most satisfying.

Martin Buckley describes the two that have passed through his hands

My first 500SL was Silver with AMG wheels. I bought it from my local MOT tester who simply stood outside his unit with a ‘for sale’ sign in the window. It showed less than 40,000 miles, and he said he had only used it a few times for “going to the casino in Bristol”.

I bought it to sell, but could rarely prise its keys from the sweaty grip of my girlfriend, who was besotted with a car that still felt so fresh and almost new, even although it was almost 20 years old. There were some minor problems with the power hood, and getting the hardtop on and off could be a bit of a struggle, if only because it was so heavy.

But it was as solid as you would expect a Mercedes to be. There was not a spot of rot on this car, or the next SL I bought, a blue example, also low mileage but still on its standard wheels, and suffering a bit from a lack of use. I bought it from my friend’s mechanic, who had in turn bought it as a present for his wife, but found she preferred her Range Rover. These were not freak purchases, by the way. as I have stumbled across three or four similarly good cars since.

My blue 500SL – registered G6 CUT – occasionally struggled to run on all eight cylinders, but injector cleaner and a good thrash up the road sorted that out. The SL Shop near Redditch did a nice job of replacing the split rear window, and once that was sorted we were away and ready to enjoyed the SL.

I have to admit I was more interested in my £1,000 1977 Jaguar XJ-S which had similar performance (in theory) but used twice as much fuel. Actually, despite my natural aversion to anything built after 1975,1 have to say I was totally impressed with my 500SLs, even if they are not the best looking or most romantic of the SL generations.

My blue 500SL occasionally struggled to run on all eight cylinders, but injector cleaner and a good thrash up the road sorted that.

Some space in the back but best to think of the SL as a civilised two-seater.

Later on there was even a variety of special edition R129s, something that had been beneath the dignity of Mercedes in earlier times.

Five-litre V8 is smooth and punchy but still capable of reasonable fuel economy.

Most R129s are automatic, four-speed up until 1995, and five-speed thereafter.

A R129 SL could never be called a sports car, but it is fast and feels very secure.

The cabin styling is very reserved, but build quality was of the highest order.