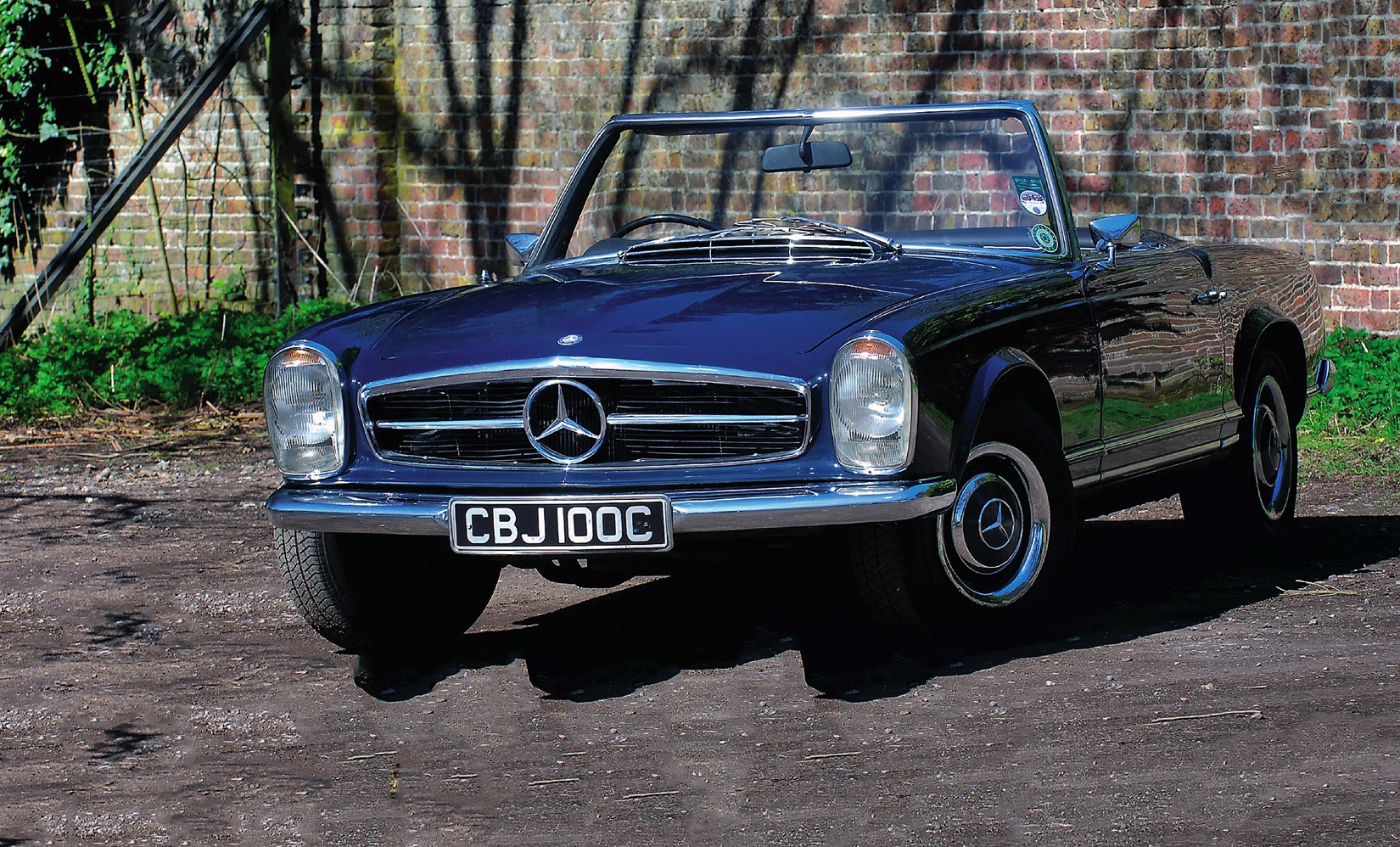 Some say it is prettiest of the classic SLs, and during’ his drive David Sutherland certainly found that this 230SL attracted a lot of attention. Compared to other 1960s cars the W113 SL feels extraordinarily modem, and on a warm day with the hardtop removed is a dream. For five decades it has been the transport of the rich and famous, from Beatle John Lennon to more recently supermodel Kate Moss and David Coulthard.

The plan had been to check out a W113 230SL from the point of view of a prospective buyer, and 30 minutes into my road test came proof that it is not possible to drive this exceptionally pretty car without attracting attention.

No sooner had we found a spot for photography, than a striking looking young woman appeared. Beckoning towards the statuesque brunette propped up against a Nissan Figaro, and surrounded by a makeup posse, she said, “Oh, I love your car, I m shooting one of my models, can I have it in my pictures?” 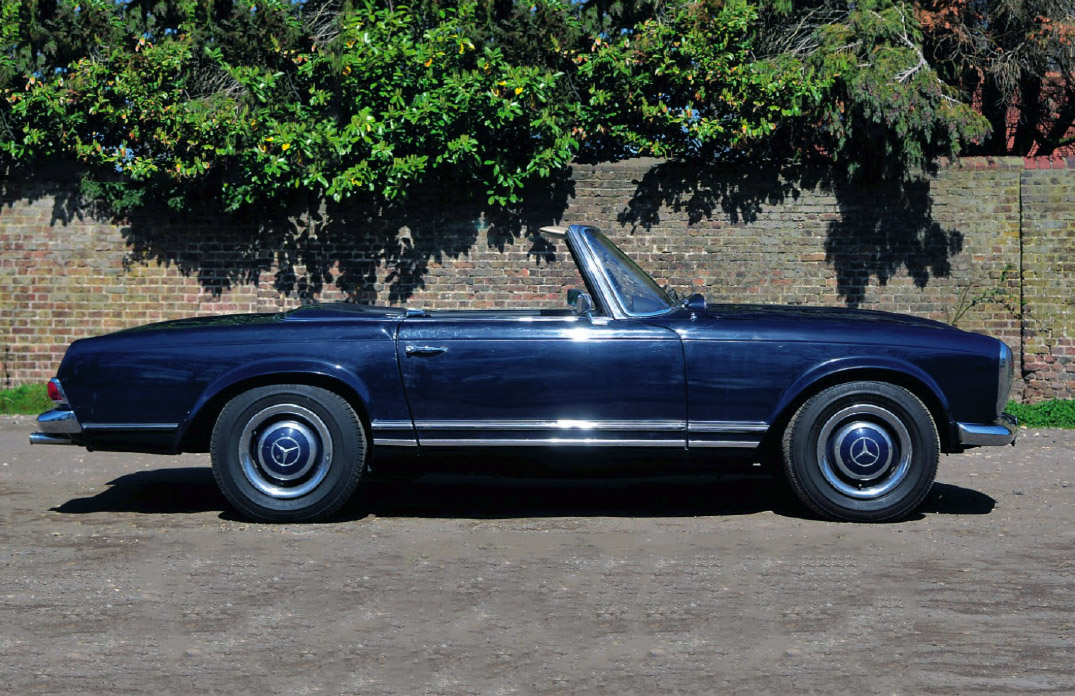 The next 20 minutes, during which much pouting and cries of “Oh, darling!” accompanied the chattering camera shutter, could not help but colour the rest of the road test for this man who will not see 50 again. I subsequently found it a little difficult to concentrate on the brief – how does it drive? Is it a practical classic? – and instead wondered who was looking at me, or rather at the Pagoda.

And those who gaze at a Mercedes-Benz Pagoda (the name is taken from the slightly concave factory hardtop) could perhaps see a star behind the wheel, as well as on the large grille. For over five decades it has been the preferred transport of the rich and famous, from Beatle John Lennon in the 1960s to more recently supermodel Kate Moss and former F1 driver turned television pundit David Coulthard, whose gorgeous, silver and blue 280SL was memorably used in the filming of an early morning track recce during the 2009 Monaco Grand Prix.

It is this long-standing adulation that has underpinned prices of the W113, built for eight years until 1971, and of all the SL generations only values of the preceding 1950s 190SL and 300SL surpass it. These days the very best condition Pagoda will cost upwards of £50,000. This January 1965 230SL, from all makes classic car dealer Chelsea Cars in Wandsworth, London, had been sold, hence managing director Rob Turner preferred not to reveal its price, but he quotes around £40,000 as an average price for a rust-free car with no mechanical issues! 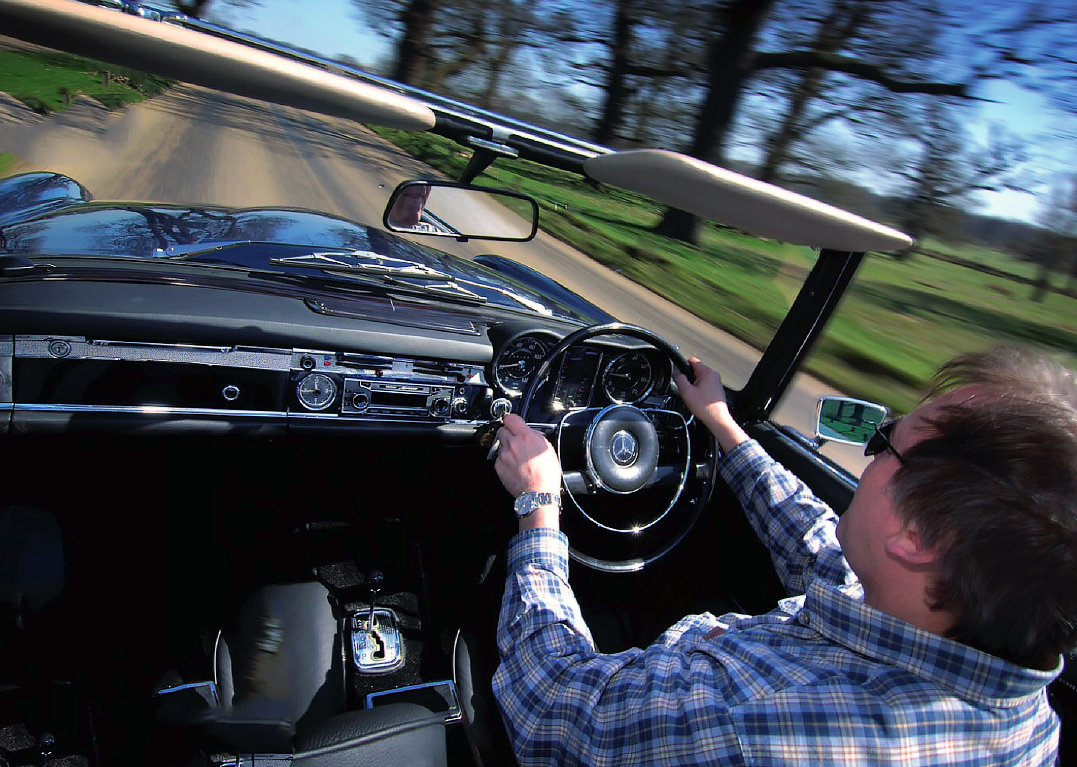 “The main difference between the 230SL and the others is the braking,” says Turner (the 230SL s rear drum brakes were replaced by discs on the 250SL and 280SL), adding that condition also plays a big part in how they drive. “A good 230SL is as good as an average 280SL.” With lighter paint shades like white and silver matched with red or tan leather seats the most sought after combination, this particular car in its dark colours feels a bit sombre, but it was resprayed and retrimmed to the customer’s desired specification. It features the optional, side-facing rear seat that although fitted with a belt is a nominal effort.

As with all Chelsea Cars’ sales, this Pagoda came with a one-year breakdown warranty covering the major mechanical components. Customers are also given a letter pointing out that they should not expect to treat a classic car in the same way they would a modern one. “The vehicle you have selected is from a different era and even w hen new required rather more care, consideration and routine maintenance than a modern vehicle,” it reads, going on to say that the car “will not necessarily be at its best on a long journey” and advising a “more relaxed approach” to driving. 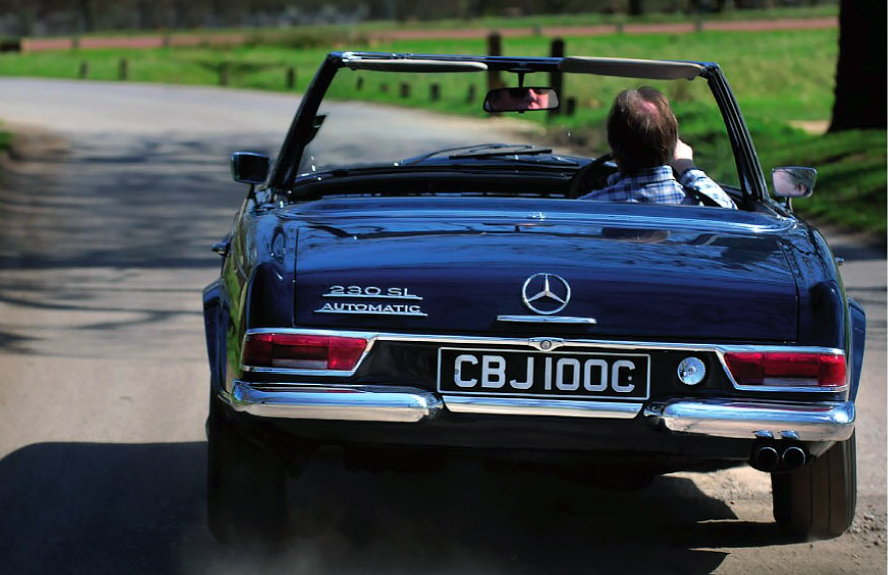 Health warning noted, I belted myself in (thankfully this car has inertia belts) and prepared for the quite tricky manoeuvre of moving off and merging into the traffic that flies round the Wandsworth one-way system. It highlights one big difference between this and most other automatic cars made since, which could throw anyone new to a Pagoda: the gear selector on the four-speed gearbox.

Instead of the lever being nudged back from Park into Drive, it travels in the opposite direction, from Park at the extreme rear through Reverse and then into Drive or 4, 3 and 2 beyond that. It feels awkward, especially as the movement from Park into Drive lacks precision, but the arrangement is none the less preferable to the manual shift on Pagodas – and the automatic gearbox also brought with it much needed power-assisted steering.

On this car, it takes quite a push on the throttle to shift the car smartly away from rest, but once the W113 is moving the fuel-injected, overhead camshaft engine feels responsive, quite sporty, even, thanks to the buzzy exhaust that is a W113 hallmark. Anyone seeking a 280SL over a 230SL on the basis of the extra speed would be disappointed. If, incidentally, a Pagoda engine lacks a crisp feel, it may be because the complicated throttle linkage with its numerous points of adjustment is out of true, and/or a float in the fuel system is sticking which causes the engine to run either too weak or too rich.

Besides its wonderful exterior styling, the Pagoda’s cabin with its painted metal fascia, chrome-edged instruments and large, thin rimmed steering wheel with semi-circular horn push is also a sheer delight. However, the messages that the lovely, knee-brushing steering wheel imparts are something else that the driver weaned on modern cars would have to get used to. Compared to that of, say a current-shape SLK this SL’s steering is extremely vague.

The system, recirculating ball compared to the rack and pinion Mercedes’ cars have had for well over a decade, has little feel, and could give some the false impression that the Pagoda suffers from slothful handling – but for a half-century old design the car actually grips the road and brakes very well. I have no complaints about ride comfort, either, which thanks in part to the long travel of the rear coil springs affords a suppleness in marked contrast to the unyieldingly firm Sport set up Mercedes-Benz likes to provide nowadays.

Chelsea Cars’ dos and don’ts’ list also warns that the Pagoda is not the ideal motorway companion, the lack of modern seat comfort a factor. At the worst end of the scale, a W113 s unrestored seating will be soft and partially collapsed, but even the best ones – and the seats on this car come close to that – are soft and none too supportive.

There are a couple of modem touches on this car. An alarm system has been installed, which with its fiddly priming and deactivating is irksome, but a Pagoda without anti-theft protection would be a very vulnerable car, indeed. A retro look Becker Mexico radio incorporating sat nav has also been fitted, though some might be happier with the simple, original radio, given the Pagoda’s pretty high noise levels and the added strain a fancy hi-fi can place on an elderly electrical system.

Of the population of decent W113s remaining, this is a middling example, with nothing obviously wrong, but at the same time it is not a concours winner – for example, its paintwork is not pristine. But the very best classics are often prisoners of their own perfection, owners afraid of using them lest the increased mileage or minor wear and tear diminish their value. I see this lovely 230SL Pagoda as more of a driver’s car, one to be used without fear of collecting the odd scuff or scratch.

I never need any persuasion to drive a W113, but could I recommend one to someone who likes the idea of one but is unaware of the realities of such a car? Provided the prospective purchaser goes for a proper test drive and truthfully analyses whether they could live with its character and also its lack of modern fittings such as parking sensors, airbags and central locking, then yes. Compared to most other 1960s cars the W113 SL feels extraordinarily modern, and on a warm day, with the hardtop removed and a destination not requiring a prompt arrival, the car is a dream. As our morning with the 230SL proved, others will think so, too – but that may be good or a bad, depending on how much you like being the centre of attention.

A retro look Becker Mexico radio incorporating sat nav has also been fitted, though some might be happier with the simple, original radio.

Becker looks like a period radio, but contains modem day electronics within.

The W113was the last SL that could be ordered with a side facing rear seat.

Air intake on the bonnet, but the best way to get fresh air is to lose the roof, automatic gear selector is unusual. Park at the rear, not the front of the gate; the tank is fuelled through a filler on the tail, to the right of the numberplate.