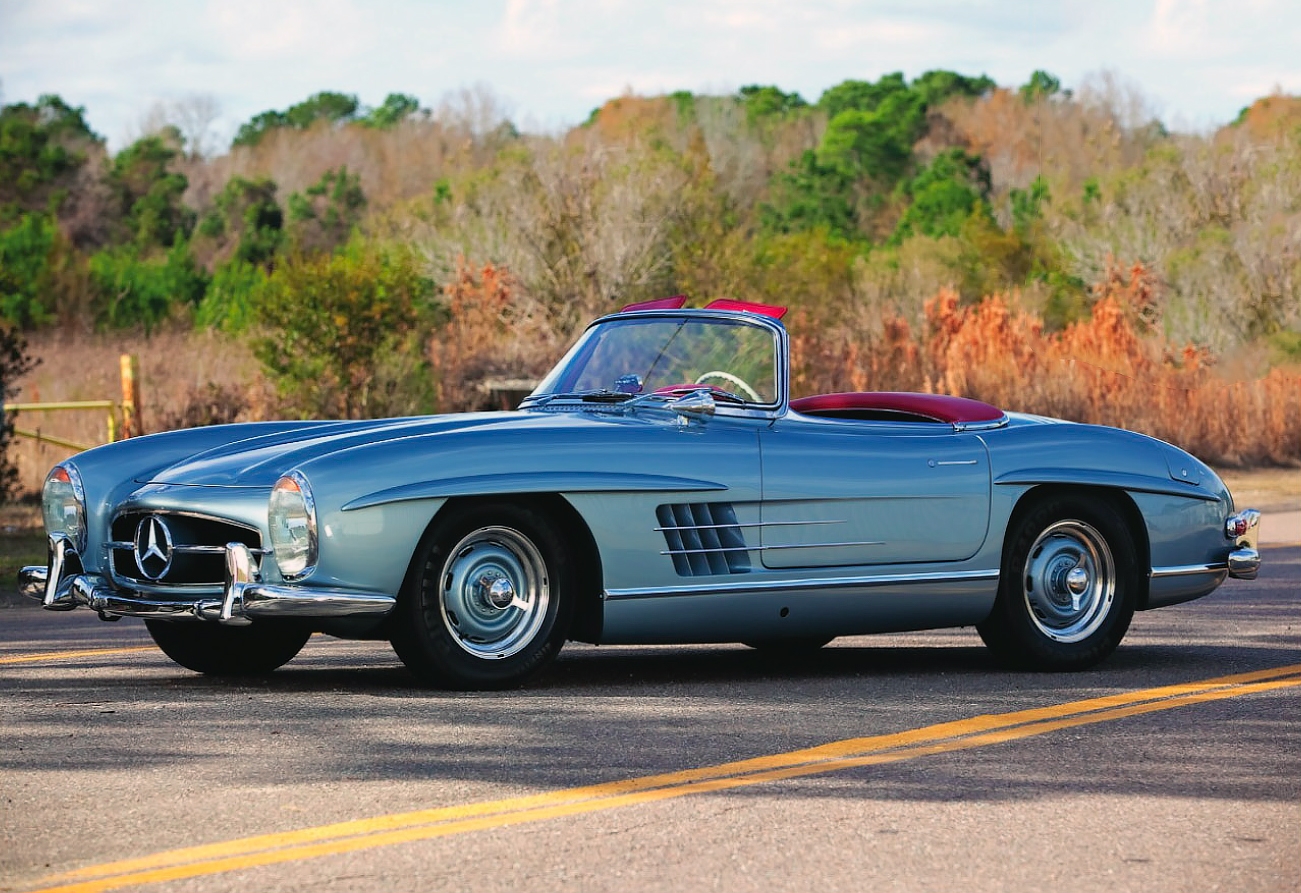 Prices of the most sought after classic Mercedes models have continued the upward trend of early 2014. A major international auction house, RM Auctions, brings us the full details of four notable cars it has sold recently. Movie star. Bought new in 1957 by Hollywood starlet Natalie Wood, and meticulously restored in 2000, this 300SL Roadster climbed easily through its top pre sale estimate to make $1.84m.

Lot 122 1957 Mercedes-Benz 300SL Roadster W198. There was no doubt that Mercedes-Benz had a hit on its hands with its spectacular 300SL Gullwing. The car’s looks, performance and brilliant engineering captivated the automotive world, and it proved to be a runaway success for Mercedes-Benz. After production ended on the iconic Gullwing coupe, the marque was eager to add a convertible version to its model line-up.

A prototype of this new model was first spotted in the summer of 1956 at Stuttgart, by the German magazine Auto Motor und Spony while the production model would later debut at the 1957 Geneva motor show. By the end of that year, the final 70 of the 1,400 Coupes and the first 618 of the 300SL Roadsters had been assembled.

Along with a convertible top, the 300SL Roadster brought a host of advancements to the already state-of-the-art 300SL platform. The central section of the 300SL s space-frame chassis was lowered, the sills were smaller, and the doors were enlarged, in order to allow improved entrance and egress. Strength was maintained, though, by the addition of diagonal struts, which braced the lowered side sections to the tubular rear members. The suspension was also revised to allow for a more comfortable tide and improved handling. At the rear, the spare tyre was repositioned below the boot floor, necessitating a smaller fuel tank, but also maintaining reasonable luggage space. 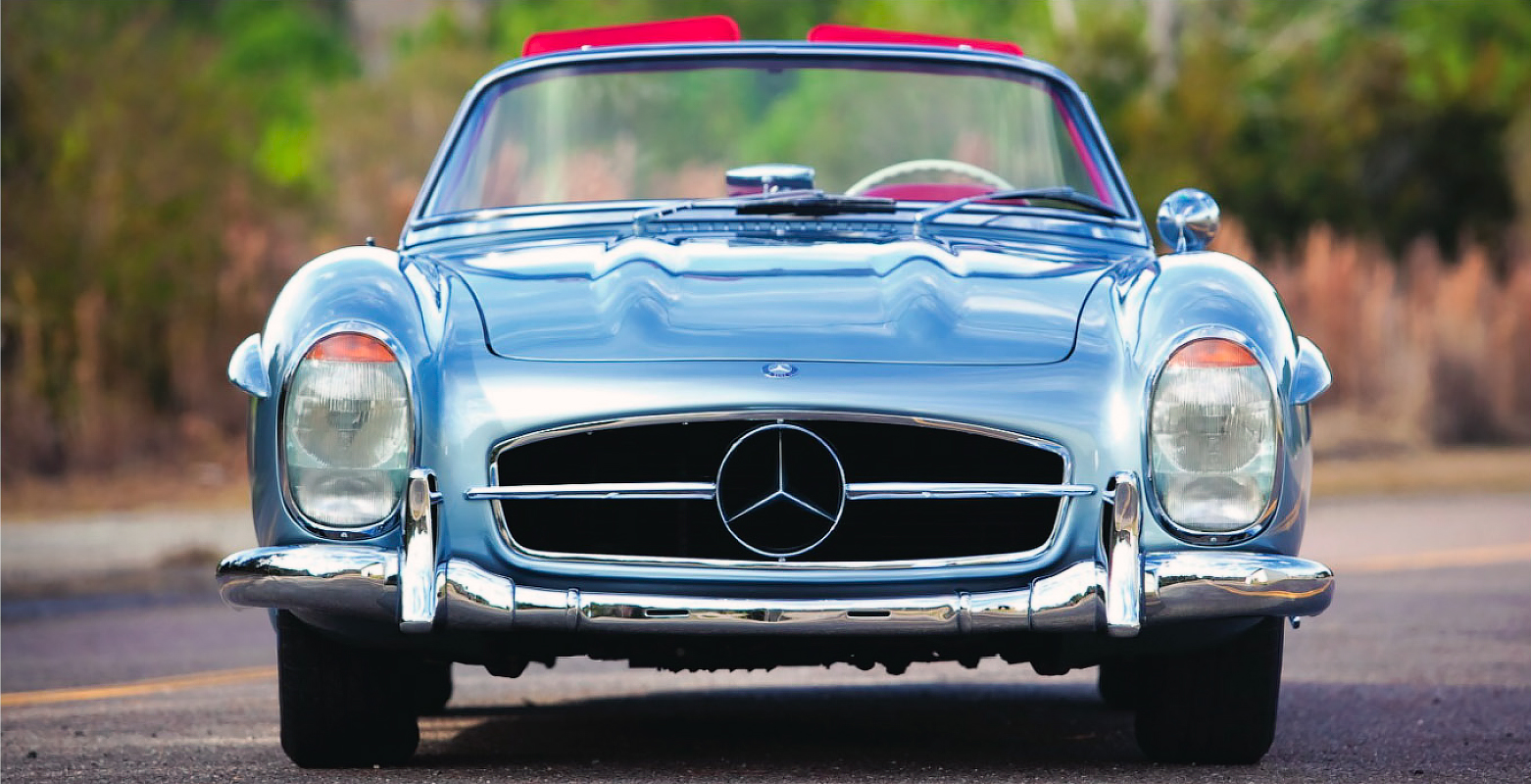 While these revisions added some 100kg, with the majority of the weight being associated with the convertible top and its mechanisms, the car remained an excellent performer, with a factory-claimed 137mph top speed.

Just like the Coupe, the 300SL Roadster proved to be the vehicle of choice for those with excellent taste in aesthetics and cutting edge engineering. As such, many wound up in the garages of celebrities, racing drivers, and other successful individuals. With a list price of SI 1,000 in the US, ownership of a 300SL Roadster was a dream to most when the car was new, but to those with the funds to spare, the car was worth even’ penny. To those looking to make a statement with the purchase of a new vehicle, there was simply no better option back in 1957.

This 300SL Roadster was one of only about 25 fitted by the factory with the extremely desirable Rudge wheels; they were more often seen on the Gullwing. In January 1958 it was bought new by none other than Hollywood actress Natalie Wood (pictured).

Wood s starring role in the classic 1947 film Miracle on 34th Street propelled her to A-list status at the age of nine, and by 1955 she had been nominated for an Academy Award for her performance as Judy in Rebel Without a Cause. She bought her Roadster at the age of 19, a month after marrying fellow actor Robert Wagner. It was the perfect automobile for Natalie Wood, as both car and driver were young, fashionable, beautiful, and brimming with talent Even though her new Roadster was painted in a gorgeous shade of Mercedes-Benz Silver (DB180) with a Red (641) leather interior, Wood had the car resprayed bright pink, but she retained the red leather. It could be argued that no other car in Hollywood attracted more attention, especially with a gorgeous young actress behind the wheel. The 300SL clearly had quite an impact on Wood, and even after parting with her pink Roadster in the 1960s, she was often seen in other vehicles adorned with the three-pointed star. 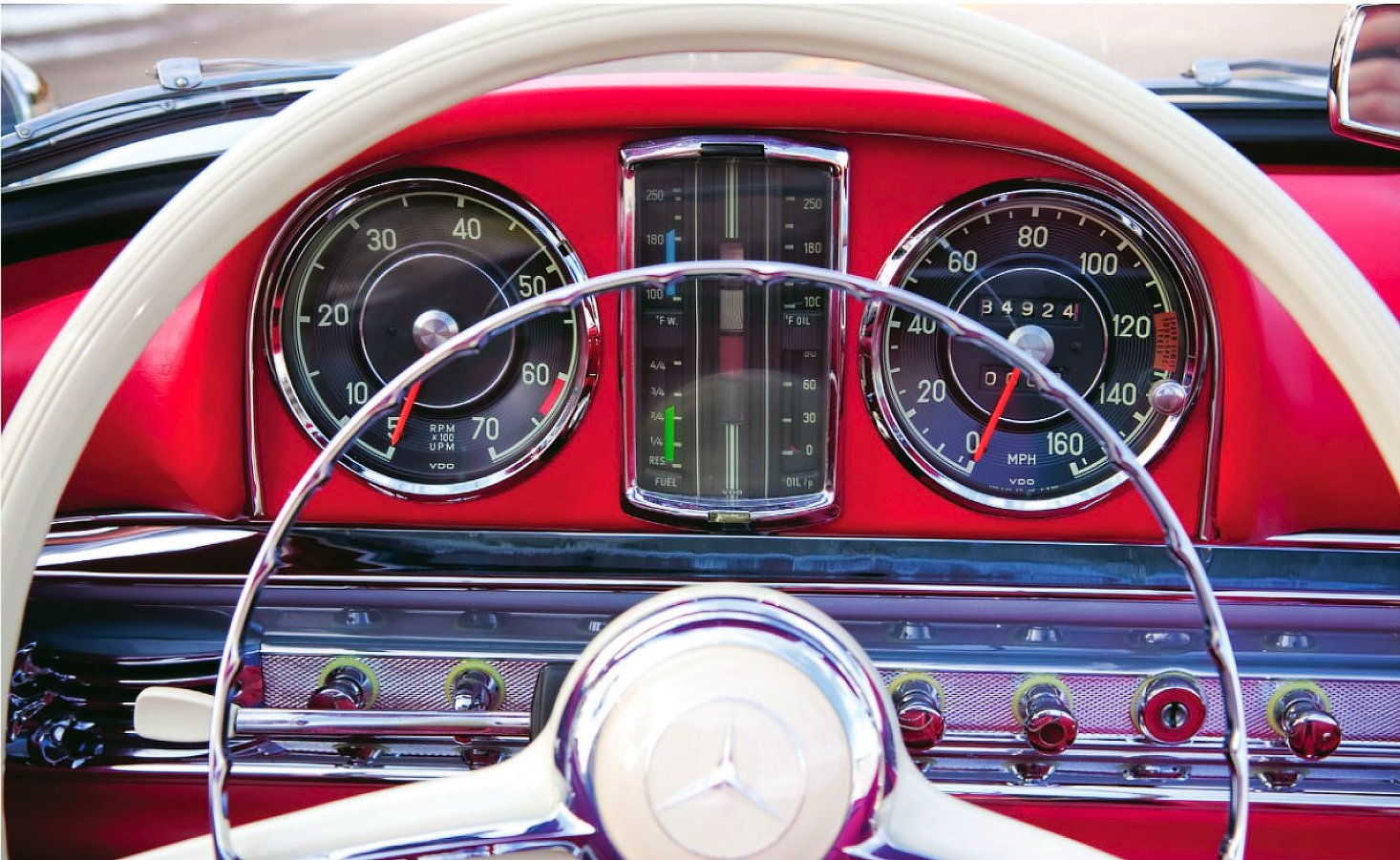 The Roadster was later owned, in 1978, by Don McColl, an enthusiast in Ontario, Canada, and it was reported to have been returned to the original colour combination at that time. In 2000 it was fully restored by the noted 300SL expert Rudi Koniczek, of Rudi & Company situated in Victoria in British Columbia, Canada.

The car was refinished in a brilliant shade of Silver Blue (353G), with a dark blue convertible top and once again a red leather interior. Interestingly, the paint seems to change in different settings, as it appears silver in most conditions, but a subtle hint of blue will emerge when under bright sunlight. Mechanical authenticity was a top priority in restoring the car, and as such it is factory correct in every detail, even down to the correct hose clamps in the engine bay. The original Rudge wheels are fitted with modern limited- production Dunlop tyres that were specially designed for the 300SL. The car is offered with a complete set of books and tools, an original Rudge spare wheel, and a period correct Becker radio, and it is fitted with the more desirable European headlights.

In 2010, under the stewardship of its current owner, the 300SL Roadster participated in the Colorado Grand, where it performed effortlessly for the entirety of the rally, proving to be a comfortable and competent high speed tourer. Then, in 2012, it had the honour of returning to Hollywood, where it was displayed by Mercedes-Benz USA in the exclusive SL.

Hollywood – Celebrating 60 Years of a Living Legend exhibition at the Warner Bros Studios in Los Angeles, California. This exhibition served to show the connection of the SL family of cars to Hollywood’s elite.

This particular Roadster was used to represent the model for the 1950s, and it was displayed among other generations of Mercedes-Benz SLs up to the present model. Celebrating Natalie Wood’s career, it was put on display with other items owned and often associated with the actress.

Later that year, the Roadster would remain in the limelight, as it made an appearance at the Amelia Island Concours d Elegance. This was a special year for the SL at Amelia Island, as the concours was celebrating the 60th anniversary of the Mercedes-Benz 300SL and its win at Le Mans in 1952. It was also a special event for this example, as it was awarded with Best in Class honours amid an excellent field.

Having put nearly 3,000 miles on the car since the completion of its restoration, the consignor notes that everything on the 300SL works perfectly, down to the original clock. It has proved its worth as both a touring and concours level machine, being as comfortable at speed as it is parked on a concours lawn. Combined with die added bonus of its celebrity provenance, the most desirable factory option of Rudge wheels, and an utterly ravishing colour combination, this is one of the finest 300SL Roadsters.

A sloping tail means you need to be quite sparing with the luggage you carry.

The actress’s car was fully restored 14 years ago, and has been a prize winner.

Over the Gullwing, the Roadster had vertically ploced minor instruments.

The chrome bumpers are such a key part of the car’s unique and iconic styling.

The 300SL introduced the solid metal hood cover that SLs since have used.

Our from the three-litre straight-six is212bhp, very healthy for 1957.

It was the perfect automobile for Natalie wood, as both car and driver were young, fashionable, beautiful and brimming with talent.

BELOW FAR RIGHT Unlike the Gullwing, the Roadster has side- rather than top-hinged doors.

It wasn’t just the Mercedes grille that made this the most exclusive sports car.

Rudge knock-off wheels were a very desirable option on the Roadster.

Natalie Wood had this 300SL resprayed pink, but kept the red leather inside.

Along with a convertible tor the 300sl roadster brought a host of advancements to the already.