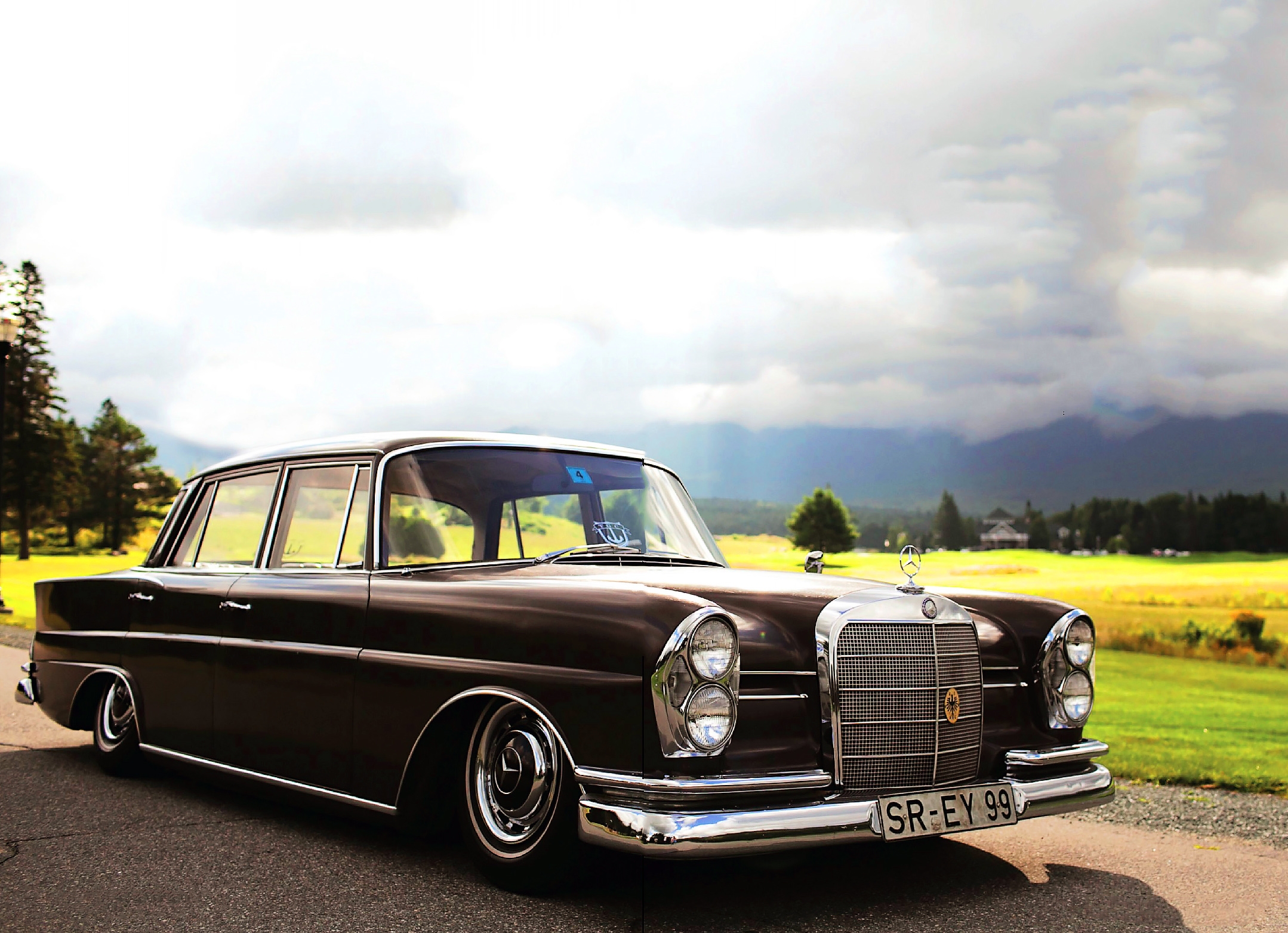 Spotlight – Mercedes-Benz 220Sb W111 Fintail. The Grand Slam. Going from venerable classic saloon to ground scraping low rider at the press of a button, this Will Fintail brings together two very different motoring scenes. A car that is modified enough to delight those looking for individuality, yet standard enough to please those who use originality as their yardstick is a rare beast.

He world of classic cars can be a strange one, and owners can be even stranger, as anyone involved with classics will tell you! At one end of the automotive spectrum are those looking for the Holy Grail of classics, a low mileage, one-owner car that is as original as it can be, while at the other end sit those people who consider modifying as much a part of ownership as fitting new tyres.

Controls for the air ride are hidden in this Argus C3.

One thing experience has taught me is that these sets of beliefs rarely come together. Indeed, a car that is modified enough to delight those looking for individuality, yet standard enough to please those who use originality as their yardstick is a rare beast. So when I became aware of this Will Mercedes-Benz 220Sb, which sits on air bags instead of springs and hides its suspension secrets in the most ingenious of ways, I felt I had to find out a little bit more about the car, and the person behind it, John Ludwick jr.

When I spoke to John at his home in Center Harbor, New Hampshire in the USA, he began by telling me that he found what many would consider to be a Holy Grail in its own right, namely a rust free Fintail.

“It was in quite a state of disrepair when I picked it up, but I could see it was straight and also solid, which was important,” he explained. “It wasn’t running and the paint needed a lot of work, but fortunately around the same time I was able to buy another 1959 Fintail which had only 48,000 miles on the clock and had a good drivetrain. That was vital as this car was originally fitted with a four on the column Hvdrak system, which was essentially an electronic clutch. Even in the early 60s the Hydrak system wasn’t reliable, so I ended up doing a transmission swap and fitting a manual clutch for the four on the column gears. Once the car was running, I then spent many hours reconditioning the paint to bring it back to life.” 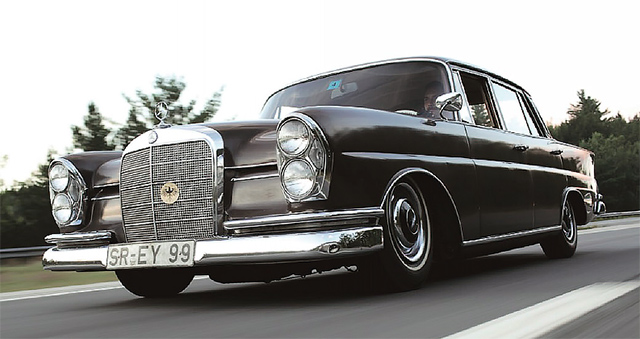 With the Fintail now usable, future modifications seemed inevitable given John’s love of the lowered look, as he explained. “I knew that adding air suspension was probably the way to go to achieve the ride height I wanted, but I didn’t want to ruin anything in this car, being in the condition that it’s in and the rarity of the car over here. I really wanted to make sure I could add the air suspension without altering anything else on the car. For me, that was fundamental.”

This transmission’s lever is now linked to a traditional, (but retrofitted) clutch pedal.

Thanks to John Ludwick Sr, who has a deep love of General Motors’ muscle cars, John Jr spent his formative years working on his father’s cars, learning how to weld and fabricate, skills which were essential in the conversion of the Fintail to air bag suspension. “It was key for me that I would be able to go back to the standard factory suspension if needed,” John explained. 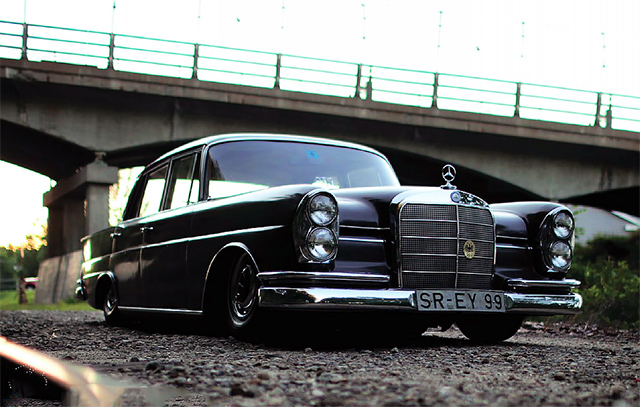 “The first task was to simply remove the springs and let the car rest on its shock absorbers, to find out if they bottomed out before the car touched the ground. Luckily, the shocks had enough travel to allow the saloon to sit on the ground, meaning I could keep the original shocks, while the wheels went up into the arches without fouling the body at all, which was great news!”

Satisfied that the Mercedes-Benz saloon needed no extra modifications, John Sr and John Jr set about taking measurements of the spring turrets and wishbones to establish what space was available for an air ride system, before speaking with Will Fisher at Bagriders.com to source the components needed to make up the system.

Opting for Slam Specialties’ RE-5 bags up front and its RE-6 bags at the rear, which can be installed into many cars by the addition of an appropriate mounting bracket, the next step for the father and son team was to fabricate some custom brackets for the W111 as, unsurprisingly, none were available off the shelf. With the bags in place, the next step was to run the relevant air lines from each corner of the car to the Asco control valves, which control the delivery and release of air into the bags, and are fed from a five-gallon (18.9-litre) tank which in turn is charged by a Viair 380C compressor, all of which is situated in the boot, concealed in a wooden trunk to avoid compromising the Pintail’s classic look. 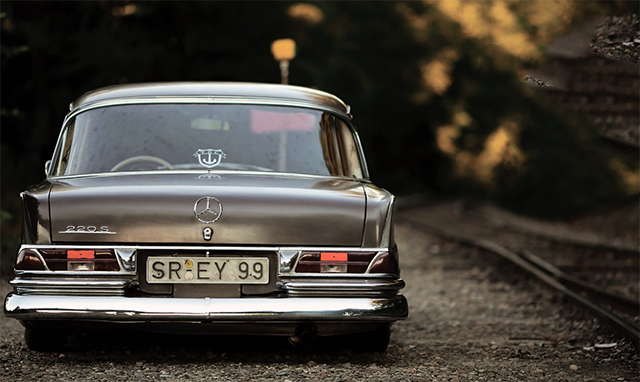 “The running of the air lines is critical,” John revealed. “I’ve used flexible lines between the air bags and the valves, and rigid lines for all the plumbing within the wooden trunk. I used DOT (Department of Transportation) approved line, which is flexible enough to allow you to make bends in it to suit the path it is taking, but strong enough to withstand the 200psi of air pressure that the system uses. I’ve run the lines under the car and fastened them to the fuel and brake lines, to ensure they are protected.

The air ride’s valves and compressor are cleverly hidden inside this trunk.

“In other areas, it’s crucial to keep your lines away from the parts of the car that move because you don’t want a line going up and over an axle that may be pinched when you lower the car.” With around eight inches of travel in the system which takes the car from its highest ride height to resting on its sills, clearly those pipe runs are important.

This car is a rolling ad for The Governors Club.

The raising and lowering of the system itself is controlled by switches linked to the Asco control valves, which allow air in or out of the system. For John Jr, however, how to make the air ride controls accessible but not spoil the aesthetics of the interior was a challenge.

“I have always appreciated air ride cars that disguise their switch box, and 1 didn’t want anything modern in my car – everything needed to be period correct. So when a friend offered me a 1942 Argus C3 camera, I jumped at the chance. It wasn’t working so I opened it up and cut all the insides out and soldered the switches into the backing plate of the camera.

“At first glance, it looks like there’s just an antique camera sitting in an antique car, when in reality it is actually the control module for the air suspension.” This is a touch that works fantastically well, I think you’ll agree, and throws the casual observer off the air ride’s scent until, of course, John Jr hits those switches and the car drops to the floor.

European style headlamps are next on John’s ‘to do’ list.

Driving just like in the good old days, but with a modem twist.

John has made sure everything is reversible on his cool creation.

So does the swapping of steel springs for air bags have a detrimental effect on the car’s handling? “Not at all,” replied John, “mostly because it’s just a large cruiser anyway. When you’re aired up, it still feels like a factory riding Mercedes, which I really like. Someone could get in it without knowing it’s had all that work done and just think it is a nice, stock, old Mercedes saloon.”

Thankfully for John, the cost of the conversion has been kept to an absolute minimum with fabrication of air bag brackets, the running of lines and so on, all carried out by himself and his father. “I don’t know an exact total, but I know it was a good deal less than the $1,500 or so it would cost you to get the work done by somebody else. We also got help from friends in The Governors Club [a brand that John set up in 2011], who were keen to help once they saw what we were doing.

“This was the car that I owned when I first decided to start the company,” continued John, “so it kind of embodies everything that The Governors Club wants to promote as far as the classy look goes. It’s something for real automotive enthusiasts, for kids who are searching for something real in the car scene and enjoy seeing classy vehicles and meeting other people with a strong automotive

passion. I think this Mercedes captures that perfectly, and I was glad they were able to help. It looks like a well kept old Mercedes to those who like those sorts of cars, but the fact it is bagged excites some of the younger guys who are really into that look and that scene, and surprises some who aren’t!”

So what does the future hold for this Mercedes? “These early Pintails are increasing in value so fast that I’m just going to hang on to it and continue to restore it,” answered John. “I’ll keep doing little bits and pieces

here and there, but really I want to keep it as close to stock as possible. It will have a reversible European headlight conversion soon, but that’s it. After that, I just want to take it out, cruise and enjoy it.”

Someone could get in it without knowing it’s had all that work done and just think it’s a nice, stock, old Mercedes

European style headlamps are next on John’s ‘to do’ list.

Driving just like in the good old days, but with a modem twist.

John has made sure everything is reversible on his cool creation

This car is a rolling ad for The Governors Club.