Bob Chambers purchased this 1983 300CD Turbodiesel with a shade over 100,000 miles on the odometer, and drove it for several years and tens of thousands of miles as a reliable, stylish, daily driver in and around the warm, dry climate typical of Florida. No salt on the road and no real winter to speak of meant that the car stayed rust free. But after all those years of regular use and other, more modern cars making their way into the fleet, Bob found that the coupe was getting less and less regular use. And that’s when his imagination started to work. Covering less than 7,000 miles in three years, Bob realised that the 300CD had become something of a forgotten car, and the idea of a V8 conversion came to mind. 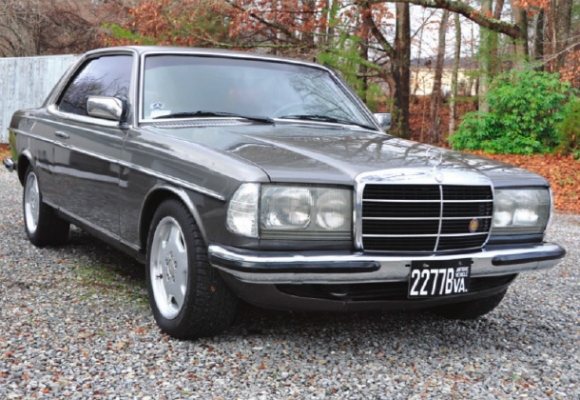 No salt on the road and no real winter to speak of meant the car stayed rust free.

WISDOM OF THE AGES

For people looking to take on projects on this kind of grand scale, the internet provides a fountain of knowledge, pain and experience. Bob frequented the online enthusiast resources such as the Mercedes-Benz Club of America and benzworld.org to solicit experiential feedback from Mercedes gurus who’d attempted such conversions previously. While there were folks who had done the old Chevy small block conversion, there were none with the same vision that Bob had of a C123 with a factory V8. Fit and finish had to be factory clean, and all of the factory elements and accessories should interact seamlessly with the new powerplant that would beat at the heart of the car.

What Bob found amongst the wealth of knowledge available online was expertise in the various configurations of Mercedes M116/M117 V8s, including dimensions, power and approximations of whether the motor would fit in the 123’s engine bay. Bob finally settled on a US spec, M117 five-litre V8 from a V126 500SEL donor car that he was able to secure for a song, thanks to the fact that it was a complete rust bucket, but all mechanical and electrical systems were in fine working order.

With his vision firmly in mind and the donor vehicle in hand, step one was a rough test fit of the V8 to see if it was even realistic to think that this would be a workable project. Thankfully, it was, but there were numerous practicalities to ensure the V8 functioned once there. The wiring was perhaps the most daunting part of the process; engines, exhausts and hydraulics either fit or they don’t, but far too many of us know that electrics can be the real challenge, and trying to merge electrical systems from two different cars separated by at least half of an automotive generation is not for the faint-hearted. Still, Bob persevered and worked slowly and methodically.

However, prior to moving forward with the wiring, Bob had to get back to the mechanical fitment. Despite the horror stories on the internet, he found that the motor secured in place with the simple use of spacers attached to the factory motor mounts – 1.25 inches on the right-hand side and 0.75 inches on the left, thus spacing the M117 perfectly between the C123’s shock towers. Minor sheet metal modifications meant that the factory radiator from the 500SEL fitted perfectly and cleared the bonnet, much to Bob’s surprise.

The factory exhaust manifolds slotted into the C123’s engine bay as well, although some modification work was required to make room for heat shields to protect critical rubber bits from the additional heat that would be generated. Bob decided to use the brake booster from the V126 thanks to both its smaller size as well as the approximately 30 per cent additional braking power it provided. The change required some minor modifications to the steel brake lines, but was a fairly easy task overall.

Making the 123’s mechanical speedometer work with the new drivetrain also required some thought. The 500SEL had an electronic speedometer, so ultimately through a series of measurements and testing, Bob determined that he could use the original tail cone from the 300CD with the 500SEL’s transmission, and since he decided to retain the 300CD’s original 3.07 differential for off-the-line performance, the speedometer still read accurately.

Bob spent a lot of time sorting through the wiring, one wire at a time, bundling them, taking them apart, and painstakingly bundling them again until all was right. Fie also had a custom exhaust made, which looked as good as any system manufactured at a Mercedes-Benz factory. Beyond that, he focused on the details to give the new powertrain that show look that he wanted: cadmium plating and – Bob’s little secret – powder coating the air filter cover to look as if it was polished aluminium. Even on close inspection, I couldn’t tell. The result is a factory clean looking execution, but does the driving experience live up to expectation?

The answer is a resounding ‘yes’. Bob’s coupe lacks those ‘cobbled together’ touches that we find all too often on conversions of this nature. Sometimes we have to make excuses for why certain things don’t work properly, or at all, but this car functions like a dream. Sitting in it, it feels like every other C123 I’ve ever sat in, and I have to admit that I like the colour combination of Henna and Anthracite; the vast majority of US cars came in some exterior colour with palomino MB-Tex.

It fires right up and settles to a smooth yet rorty idle. The gear selector works as Mercedes-Benz intended and the car glides

onto the road effortlessly. Incidentally, the air con works brilliantly as well, because Bob is, after all, a perfectionist. Acceleration is muscle car strong, and I’d be afraid to push it too hard on the twisty roads of rural Virginia for fear of ending up on the wrong side of an insurance claim. Suffice to say, it all works brilliantly.

So what’s next for Bob? He’s definitely a car guy with ideas, and this Mercedes has been on the market more than once. The problem is that every time he gets close to selling it, he looks at it through the eyes of a potential buyer and falls in love all over again. And really, who can blame him?

Sorting the car’s wiring took hours and hours. This is a 123 range topper of a different kind. An extra three cylinders and two litres. Who says 123s don’t make great hot rods? Owner Bob Chambers can’t let this car go. The C123’s speedo works with the new V8. There are a few personal touches inside. Anthradte paint and clear indicator lenses.