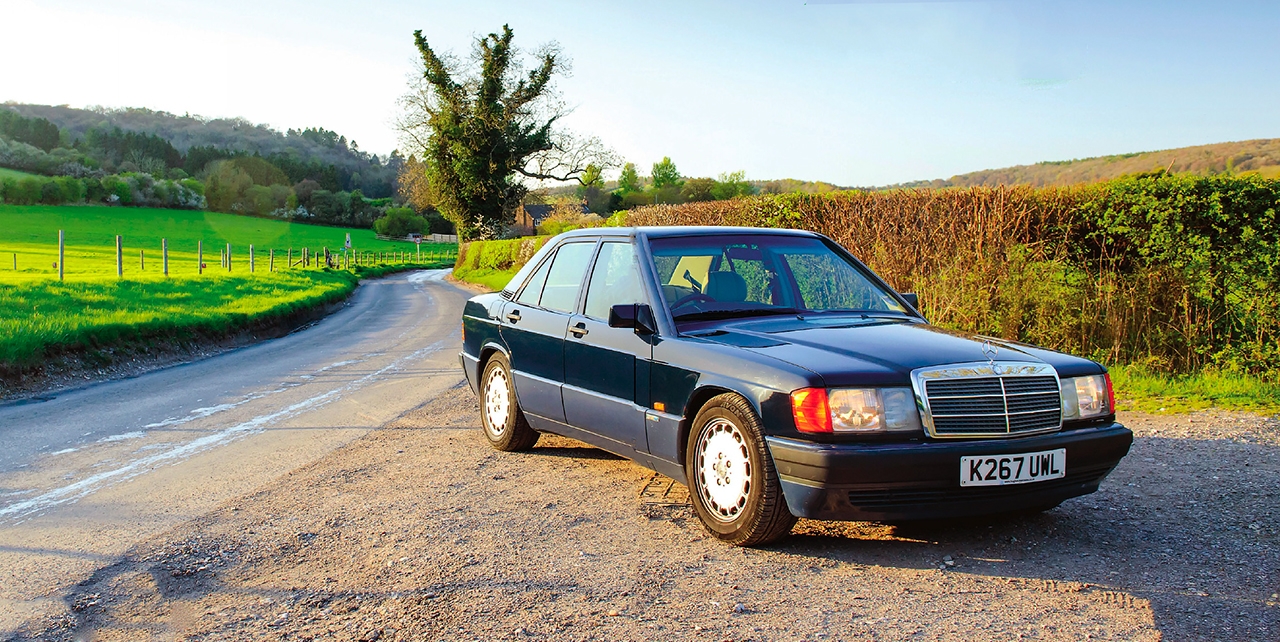 Youngtimer Mercedes-Benz 190E 2.6 W201 twin-turbo. Force of nature. This car may look like a standard 190E 2.6 Sportline, but under the bonnet lies a Turbo Technics kit delivering almost 300bhp.

When editor Molyneux sent me a message requesting that I arrange a feature with a special, turbocharged Mercedes-Benz, my mind immediately filled with images of an exuberantly be-winged CLK or SL containing riotous power and tyre smoking potential. I read the message further and discovered the subject of my attentions was to be a 190 – my imagination then conjured images of something in the mould of a 16-valve Evolution model, with equally tyre smoking potential from a heavily boosted M102 four-pot.

So you can imagine my surprise when, a few days later, owner Jack Murray sent me a few shots of what appeared to be a very’ tidy, but staunchly standard looking 190E 2.6 Sportline. Now, a 2.6 is a rare find these days (I could only find six for sale in the UK at the time of writing), more so a Sportline with such a nice colour combination as this one has – the elegant and attractive cream interior offsetting the dark blue metallic finish beautifully. But a unique, turbo special? Well, I was intrigued…

The story of this car is actually entrenched in a little known, but very well respected conversion which was offered for the 124-series in the late 1980s and 90s. Turbo Technics may be better known for its Ford turbo conversions (with Sierra 4×4, Capri and XR3i all subject to the Turbo Technics treatment back in the day), but through Mercedes-Benz dealer Hughes of Beaconsfield you could augment your 124 with a twin-turbo kit developed to work with the M103 3.0 and M104 3.2 straight-sixes.

As expensive as the conversion was (something close to £9,000 fitted), the substantial boost from 178bhp to 310bhp (in the M103) was probably quite convincing upon experiencing both turbochargers in full flight. That the early – and heavier – 500E sported just 12bhp more and a much bigger price tag would surely seal the deal for many.

The first of several nice dovetails to this story – and a clue to how this car came to be – lies in Jack’s current place of employment: Hughes of Beaconsfield. Jack has worked as a technician at Hughes’ for 12 years, and having started Mercedes ownership with a 190 2.0, he soon hankered after something a bit quicker. Whilst a Cosworth would have been ideal, finding one proved tricky. Fate stepped in when a colleague decided to sell his 2.6 Sportline, and knowing the car’s excellent provenance, Jack snapped it up straight away. That was six years ago, and in the intervening years the 190 has provided the kind of pleasurable motoring you would expect.

The next stage in the story came into play when the parts manager at Hughes of Beaconsfield decided to start offloading obsolete stock in 2011. This included a handful of leftover Turbo Technics kits that had never found a 124 to call home. Having watched the kits diminish in number, heading to places such as Spain, Germany and Bulgaria, eventually only one kit remained. You can probably see where this is going.

THE LONG ROAD TO FAST

With past experience of Turbo Technics 124s, Jack had always thought they were amazing, and having snapped up that last remaining kit, the original plan was to source a 124, fit the kit to that, and have himself a Turbo Technics 124 just like those he’d been so impressed with.

But as time went by, the thought of fitting the kit to the 190E started to percolate to the surface – after all, he liked the 190E, knew the car inside out, and research suggested the 2.6 was plenty strong enough (and ran a low enough compression ratio) to accept the turbos without a hitch. 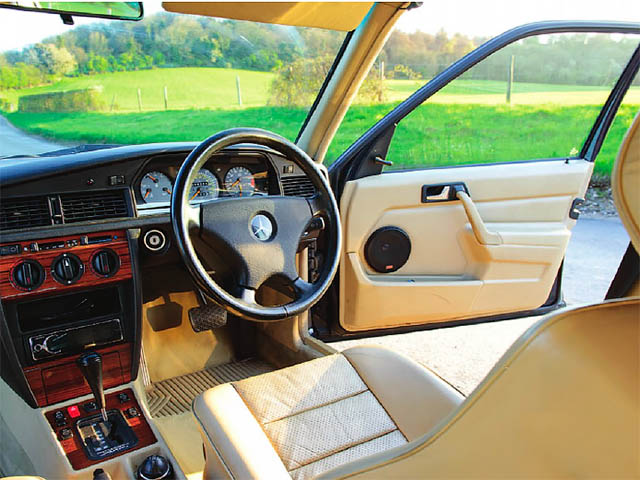 Once you’ve tickled the turbos awake, boost and power build in a pleasingly linear fashion. The process wouldn’t be without challenges, though. For a start, the 124 has a larger engine bay (1,740mm wide versus 1,689mm in the 190), so squeezing a kit designed for the 124 into the narrower 190E was always going to be an issue. The turbos fitted (just), and the intercooler slotted into the preferred position below the bumper, but the oil pressure switch and turbo oil feed were altered to suit the 190E’s engine bay, whilst the cold air box fitted to the 124 was replaced with a pair of cone air filters. The air conditioning was binned, firstly because it didn’t work, and secondly because this allowed easier routing of the new pipework.

The engine itself was treated to a rebuild, and being the only fitment of its kind, Jack had to fabricate a complete exhaust system from manifold to back box – but retained a near standard appearance. As the kit came with only partial electronics (the joys of buying the last kit off the shelf!), Jack decided to bypass them, running a piggy-back ECU to manage the extra fuelling requirements of the boosted 2.6. However, it didn’t deliver the expected power, looked a bit untidy, and didn’t run as cleanly as it should, so the bullet was bitten and the 190E was sent to Power Engineering in Middlesex for updated fuel and ignition systems.

The results were impressive to say the least. The 190E returned with a smooth running engine delivering a whopping 290bhp and 270lb ft of torque. Job done. Well, almost.

Under full boost the four-speed automatic transmission was slipping slightly, so the modulating pressure was cranked up a notch, which stopped the slip and makes for a more positive – albeit harsher – gear change.

And so on a sunny Sunday in April (yes, such things do exist!) the main focus of our test drive and photoshoot of this Mercedes 190E curio is to see and feel how well integrated the system is, and how the 2.6 copes with over 83 per cent more grunt. You will have noticed by now that there has been no mention of upgrades to the chassis, brakes, tyres or steering to cope with the power – all are the same spec as they left the factory in 1992. Part budget constraint, partly a desire to retain the Sportline’s less ‘sporting’ (yes, we see the irony), more ‘grand touring’ set up.

Of course, starting with a Sportline model gets things off to a flier – the 22mm lower suspension, quicker steering and lower profile tyres improving body control and dynamic response. Jack has considered adding a limited-slip differential, and has treated the 2.6 to bigger brakes from a 126 since this photoshoot, but for now we go as we are.

On the lumpen lanes surrounding our meeting spot in rural Buckinghamshire, the 190 glides along with a hint of firmness to the suspension giving just a little vertical motion, but it’s essentially smooth and pliant. The engine is quiet, the custom exhaust a little boomy around the 2,000rpm mark – something Jack intends to resolve. The steering is nicely weighted and loads up consistently, but feedback is a little syrupy. The lovely, cream leather Sportline seats provide plenty of support, and the driving position is spot on with the chunky steering wheel just where I’d like it. It’s easy to see why Jack finds this 190 such a pleasing car for cruising around in.

Out onto some smoother, more open roads and with all the essential fluids warmed up it’s time to find out what happens when right pedal meets carpet. The answer, hitting a small patch of water in second gear, is wheelspin, noise and more velocity than any bystander would compute for such a prosaic looking vehicle.

There is some lag low down (this is essentially an early 1990s turbo system with modern management, remember), but once you have more than 2,000rpm showing on the rev counter, the torque comes on strong and will easily break traction in the lower gears. With this much twisting force, an LSD would definitely be a worthwhile upgrade.

Once you’ve tickled the turbos awake, boost and power build in a pleasingly linear fashion before reaching a plateau as you approach the redline – the turbo whistle prevalent in the upper reaches of the rev range melding with the straight-six thrum always evokes a smile. The thrust on offer is quite remarkable. I actually find myself preferring to slot home third gear and let the torque do the work – this helps traction, and progress seems much the same in the higher gear, such is the torque rich delivery. 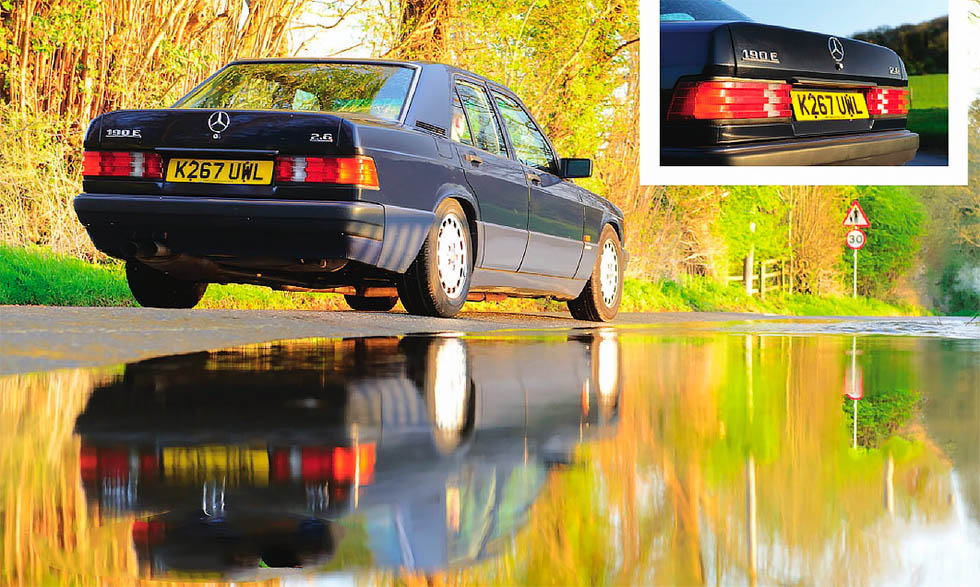 With these aesthetics, this car would give a hilarious surprise to many an onlooker. Not so hilarious for a 90s BMW M3 driver, though – this car really is that quick. But I’m not going to lie, the chassis does struggle to keep up.

Of course, this is hardly surprising in a car designed for a far less demanding powertrain, and in some ways it’s perversely amusing trying to judge when and where the 190E will be able to cope with full throttle. It has a nicely balanced chassis, so its behaviour remains essentially viceless, but the brakes struggle and I’m sure the 126 system Jack has fitted since our test improves things markedly. The key is to drive this car as you would a normal 2.6, and just use the power when you want it.

Most modified cars end up fundamentally removed from their origin, usually a much more compromised, focused beast designed to deliver performance at the cost of day-to-day usability. And for most, that’s just fine. What we have here though, is a very different take on a modified car. It retains every positive facet of the 2.6-smooth, comfortable, elegant – and simply adds a huge dose of added performance when you want it. Drive it as such, and – like me – you’ll probably think it’s brilliant. 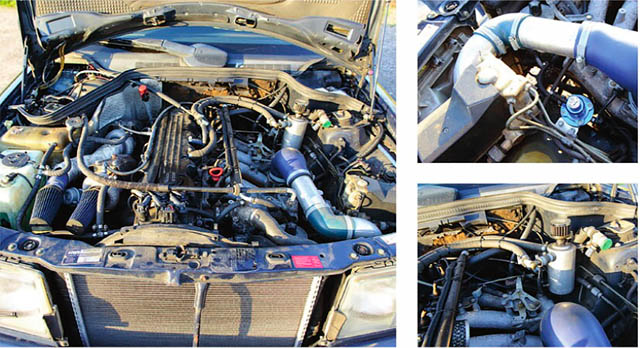 This 2,597cc model ruled the 190E roost in terms of engine size. A limited-slip diff could be on the cards for this W201 biturbo.