There was even a road car, the M6GT, which faded from the scene after the tragic death of Bruce McLaren in 1970. That car was very advanced for its time with a claimed maximum speed of 180 mph, 0-60 mph in 4.2 seconds and 100 mph in just 8 seconds. Its tuned 5.7-litre Chevrolet V8 developed 370 bhp. 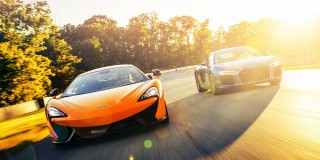 Audi has yet to compete in Formula 1, if indeed it ever will, although its parent came close to buying Red Bull before the ‘dieselgate’ scandal scuppered its plans, but it has competed in many classes of motorsport including World rallying, WEC, LMS GT3, DTM and World Touring Cars and many national series. In the same way McLaren once dominated Formula 1, Audi conquered Le Mans 13 times. Sadly there won’t be a 14th victory as Audi is quitting World Endurance Championship in favour of Formula E, which it will no doubt win. McLaren has also won at Le Mans, at its first attempt, coming 1st, 3rd, 4th 5th and 13th in 1995.

After the demise of the M6GT, McLaren’s next foray into supercar territory was the F1, of Rowan Atkinson fame, manufactured between 1992 and 1999. Audi would not join the fray until 2007, with the R8 V8 Coupé.

It is interesting to contrast the factories where the McLaren road cars and the R8s are made. McLaren’s plant is like a huge operating theatre whereas the little R8 plant at Neckarsulm is more like Morgan. Regardless of those environments there is no doubting the quality of either range. Currently Audi market just three R8s; V10 Coupé and Spyder and V10 Coupé Plus whereas McLaren offers a plethora of models: 570S, 570GT, 540C, 675LT, 675LT Spider, 650S, 650S Spider and 650S Can-Am Spider Limited Edition. 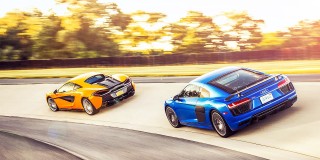 The 570GT tested here is probably the closest to the R8 and is the McLaren designed more for road use than maximum attack on race tracks. That’s not to say it is not suitable for circuit use although its sister, the 570S or its big beast of a brother the 675 will be the ones to choose for track use.

McLaren engineering is all about saving weight, which is one reason the company hasn’t embraced all-wheel drive like Audi. The 570 GT is 245 kg lighter than the R8; that is more than two hundredweight in old money. This may make the car more nimble but doesn’t seem to affect the performance, which is better in the R8 Plus, which does of course develop another 40 PS. While fuel consumption probably doesn’t figure for potential owners, the 570 GT claim is a couple of mpg better.

It is impossible to explore the towering handling and performance of this car on Sussex lanes. In fact there are few public roads in the world that are suitable to do that. But at real-world speeds the 570GT performs flawlessly, with perfectly weighted steering, surefooted handling and progressive turn-in. At first the brakes don’t appear to respond very well but once used to them, they are fabulous, with totally linear response, rather better than the R8’s somewhat over-servoed braking.

The interior of the 570 GT is a special place to be, with great swathes of fine quality hide. I have to say that while there is less leather in the R8, what there is has more refined stitching and the general fit and finish of the R8 is superior. Also the 570 GT suffered some creaks and rattles, unforgiveable in a £150,000 car.

The McLaren 650S driven on the same day seemed to have a much higher quality interior with no creaks and rattles but it is £60,000 more expensive! Now that is a fabulous car, with truly amazing performance, like 0-124 mph in 8.4 seconds!

So, crunch time; which to choose? Beauty is in the eye of the beholder but for me the McLaren styling is fussy and poorly resolved against the crisp enduring looks of the Audi. But McLaren sells out every series it builds and its cars generally appreciate, whether it’s a 1990s P1 which cost £650,000 now fetching £10 million, or more recent models costing more secondhand than new. Despite being £20,000 more expensive, the 570 GT can be leased over three years for around £1,000 – rather less than an R8 Plus. Mind you, with rumours circulating that Audi will not replace the R8 as part of Group cuts to fund the ‘diesel’ issue, it may be worth buying one of the last ones, perhaps a Spyder, to lay down for the future.