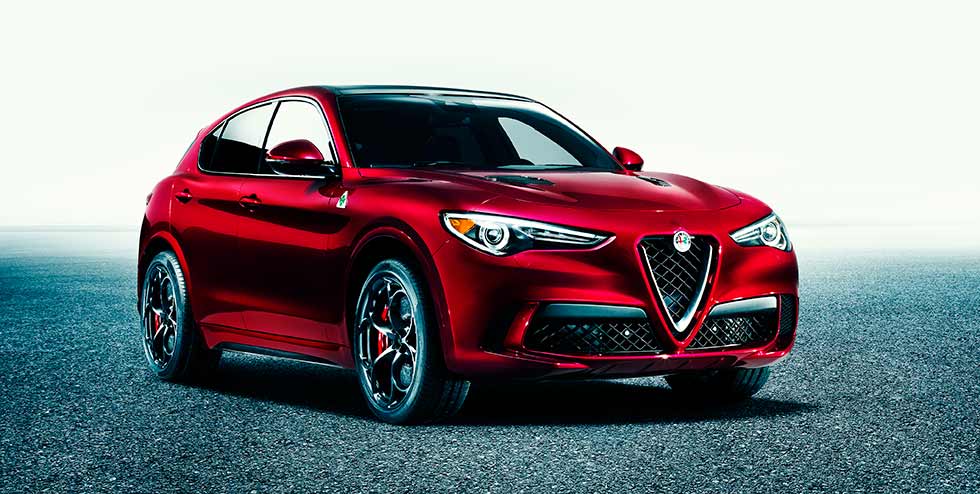 After critical acclaim for the Giulia, Alfa is hoping for a repeat performance from its new 503bhp twin-turbo SUV.

style=”flat” size=”4″]THE Los Angeles location chosen for the launch of Alfa Romeo’s first SUV is no coincidence. If an SUV will succeed anywhere, it’s in the United States, and the Stelvio is the car that will make or break Alfa’s name in one of the world’s biggest and most influential automotive markets. But it’s important for us too.

Manufacturers such as Porsche and BMW have already demonstrated it’s possible to build an SUV that appeals to driving enthusiasts, but Alfa has much more work to do to convince us.

In its last two launches, the 4C sports car and Giulia saloon, only the latter has hit the mark. Forget the heresy of Alfa Romeo building an SUV; we need more convincing it can build a competitive product full-stop.

The Stelvio gets off to a good start, not least because Alfa has unveiled the car, as it did with the Giulia, in rangetopping Quadrifoglio specification.

Like the cloverleaf-badged saloon, the Stelvio gets a 2.9-litre twin-turbo V6 – designed and constructed with input from Ferrari – developing 503bhp. Less power than a BMW X5 M F15, but enough to get it to 62mph  in 3.9sec and on to 177mph. Cylinder deactivation prevents the contents of your wallet disappearing at a similarly rapid pace. 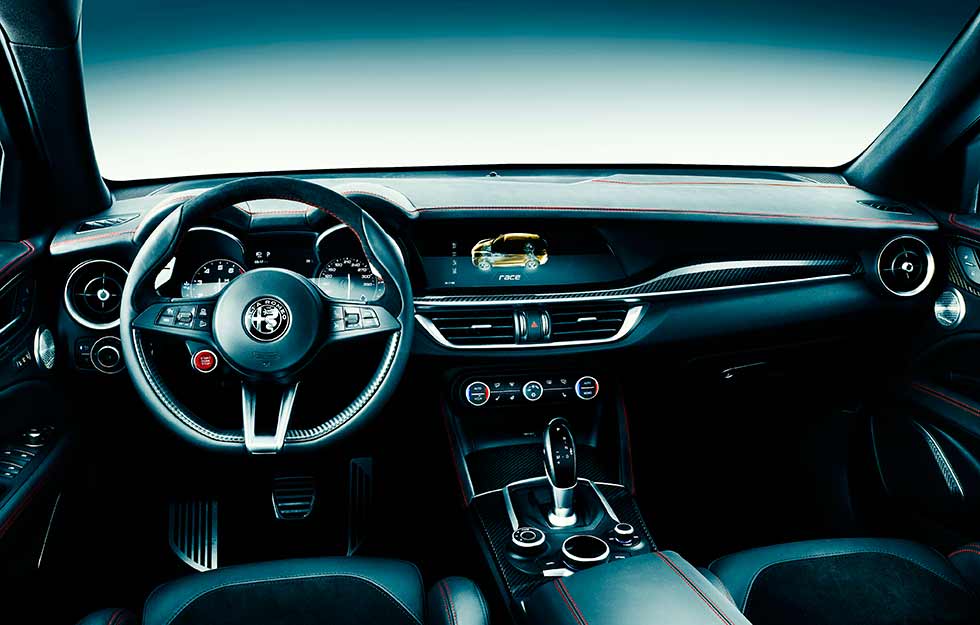 Transmitting that power to the road is a standard eight-speed ZF automatic transmission (ZF8HP Type), similar to that in the Giulia, though the Stelvio also comes with standard Q4 allwheel drive with torque vectoring. In normal conditions the Stelvio sends 100 per cent of its power to the rear wheels, with two clutches in the rear differential to meter out power as required to either wheel. A central active transfer case can then transmit torque between the axles, sending up to 50 per cent to the front wheels if necessary. Alfa claims intervention from the stability control system should be minimal.

Other engine choices will echo those of the Giulia range. A 276bhp, 2-litre turbocharged petrol has been confirmed, with a 5.4sec 0-62mph time and an eight-speed ZF auto, but a variant of the 2.2-litre four-cylinder turbodiesel is highly likely. 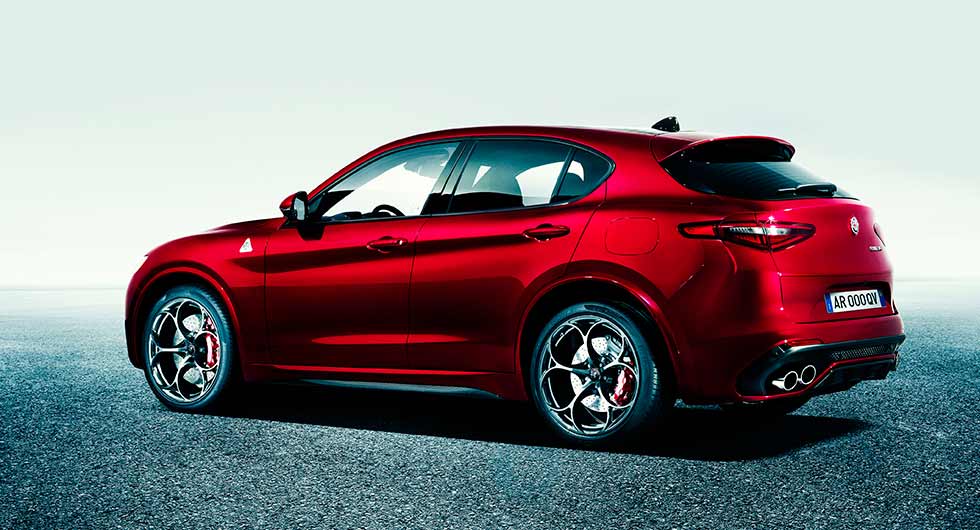 As with the Jaguar I-Pace on the previous pages, the Stelvio uses double-wishbone suspension up front and a multi-link axle astern. Damping is electronically controlled while braking for the Quadrifoglio uses carbon-ceramic discs as standard. Alfa’s DNA Pro system also makes a reappearance, allowing the driver to alter the characteristics of the car’s dynamics and powertrain. In Race mode (Dynamic, Natural and Advanced Efficiency modes can also be selected) the stability control system is relaxed, gearchange times cut and the steering, dampers and throttle responses are all ramped up to more intense settings. 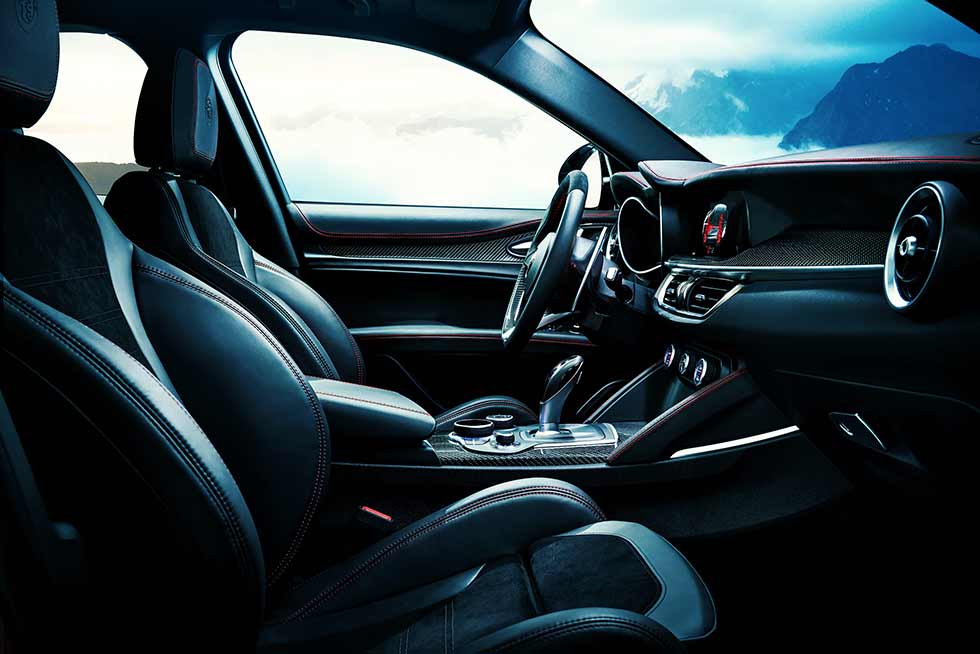 You’ll note that we’ve avoided mention of the Stelvio’s styling until now. It will undoubtedly take a little getting used to; bear in mind, though, the tsunami of negative comment about Porsche’s first Cayenne, and then consider how much money it made the company. So we’ll overlook the slightly awkward looks if the Stelvio drives as well as the Giulia. There’s no word yet on pricing, but expect the Stelvio to arrive in UK showrooms during 2017.