The element of surprise is something that should never be underestimated. Blindsiding people invariably gives you an advantage, and in the automotive sphere this kind of behaviour is crucial. Sure, we feature a lot of cars with outrageous and ostentatious exterior aesthetics, but the approach taken here by Gold Coast resident Andrew Marment is deliberately deceptive. You see, it’s one thing to build a straightforward sleeper, throwing surprising levels of horsepower into a totally stock-looking car – one that doesn’t seem to be at all modified but has the potential to raise hell and eyebrows – but what Andrew’s done is arguably even more cunning. His pristine 1990 BMW 325i Touring E30 has the appearance of being only slightly modified – at first glance there are a few obvious upgrades, namely the overtly oversized 18” wheels and lowered stance, along with the blackedout windows and drainpipe exhaust. To most people, that would appear to be it. 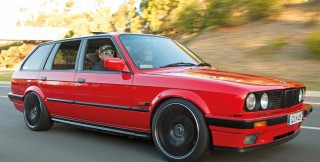 A clean car with a few tweaks. Perhaps a sensible daily, or a teen’s first ride. And it’s exactly this unassuming nature that allows Andrew to toast your eyebrows clean off your face with his vast swells of horsepower. You see, beneath that bonnet resides a Nissan motor of such supreme complexity and malevolence, it’ll have the junk-in-the-trunk Touring scrabbling for the horizon before you’ve even realised the lights went green.

The startling reality of this perky E30 wagon is the inevitable culmination of two key paths in Andrew’s affections, converging at precisely this Brilliant red point: firstly, that he’s always had a thing for E30s, and secondly that he’s got a solid history of mucking about with Japanese motors. Stir those two ingredients together and this is what you get. “I’ve been a fan of BMWs since I was a teenager; they have a classic shape and style, and the E30’s always been a favourite,” he explains. 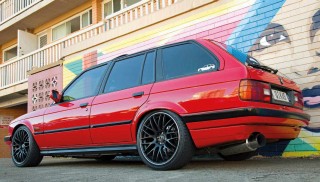 However, his first car was actually a Holden Gemini (an Australasian model which is basically an Isuzu) into which he bolted a fully-built 2.0-litre Isuzu twin-cam with a T04B turbo to throw 245hp through the rear wheels. After that he bought a Nissan Pulsar GTi-R, a car that came with the SR20DET motor and which was built up to over 300hp at all four wheels under Andrew’s careful tutelage.

Unavoidable, then, that he’d want to shoehorn an SR20 into an E30? Most certainly… although this Touring wasn’t his first crack at it. “My first BMW was a 1984 E30 318i two-door,” he recalls. “It was almost undriveable when I bought it – there was no reverse gear and it was blowing huge amounts of white smoke, although this didn’t concern me as I was planning to rebuild it from the ground up anyway. I started with the build, fitted a Nissan SR20 and got it running, but then blew the diff and collapsed the wheel bearings in one go! From then I fitted the E28 LSD and rebuilt driveshafts, although my situation changed and the car got put on the back burner.”

It remained there for a little while, before Andrew was able to rekindle the flame with renewed vigour when he happened across an impressively tidy E30 Touring. “I’m a huge fan of wagons,” he says, “and this looked to be a really good one. It had been privately imported from the UK in the late 1990s, and had a full service history and all the original documents. It was actually on sale in Sydney, so having negotiated with the seller on the phone, I jumped on a plane and drove it 850km home! It was a totally original car, and I’m its third Australian owner.” Originality will only get you so far, of course – in the pursuit of fast-road thrills, there’s little room for sentimentality. Think of it not as a cherished survivor, but the best possible project base. Particularly for someone who enjoys deploying the element of surprise. “I bought the car with the intention of swapping in the running gear from my 318i,” he brazenly admits. Zero messing about here. 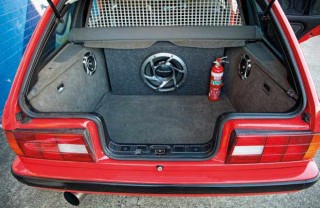 So what exactly is the story with that turbocharged Japanese motor, then? “Well,” says Andrew, taking a breath. “Are you ready? I started with a Nissan SR20DET from a 2001 S15. The engine was stripped down and inspected, and now the bottom end has CP forged pistons, forged Eagle rods, ARP bolts, a shotpeened and balanced crank and ACL race bearings. The top end has been ported and polished and has ARP head studs, Brian Crower 272 cams, adjustable cam gears, 1mm oversized valves, valve springs and titanium retainers, along with Tomei rocker stoppers and new Nissan rocker arms and lifters. A throttle body from an NA SR20DE was fitted, and the runners on the plenum were port-matched to the head.

1000cc injectors are fitted to the standard fuel rail, and there’s also a Turbosmart FPR800 fuel regulator and upgraded fuel lines, and I fitted a surge tank in the spare wheel well. A Bosch 044 pump feeds the engine, and a Microtech LT10S controls the fuel and ignition.”

That’s not all, naturally. We also have to consider the hilarious aspect of that turbo. “Boost is supplied by a Garrett GT3082R,” he grins. “It comes on to boost late and hard, which I don’t mind! I’m running a Tial 38mm external wastegate and Turbosmart plumb back blow off valve, and I managed to find an off-the-shelf intercooler that fits behind the grille and between the headlights. Dan at GoPipes took care of the custom exhaust manifold, stainless steel dump pipe, intercooler piping and plumb back BOV pipe.”

Phew. That’s a seriously hardcore spec, and yet you’d never expect to find all that going on beneath the veil of an ostensibly stock-ish Touring, would you? OK, the exhaust might be a bit of a giveaway, but it’s by no means conclusive. It’s only when you hear the noise the car’s making that the penny starts to drop – although Andrew’s entirely disappeared from view before the penny actually hits the ground. “Yeah, I love the sound of the SR20,” he smiles. We can’t really blame him. And was it a conscious decision from the off to leave the car looking unassuming? “Well, the standard interior is great in this car,” he says, “and I’d love to fi t an M Tech 2 kit to the exterior in the future, but… well, it just looks right, doesn’t it?” Again, no arguments here. 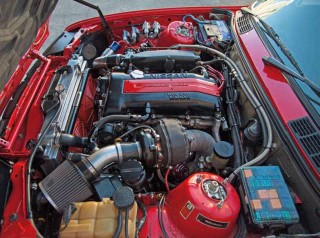 The wheels are an entertainingly in-your-face addition though, aren’t they? Andrew’s got a bit of a thing for mesh-style rims, and these MSR 045s were custom-made for him in the States, involving a three month wait but really imbuing the E30 profile with a laid-down Touring Car vibe.

These are all simply pieces in the jigsaw puzzle of shock-and-awe that this slightly unhinged aficionado has been so careful to artfully craft. It may look like the car that someone’s grandpa spent decades cherishing and polishing, and occasionally running to the supermarket, before passing it down to a mischievous young grandson who bolted on a big set of wheels, but the reality of the situation is far more intricate.

What Andrew’s created here is perhaps the ultimate street racer; sure, the engine will irritate the purists, but then again how will they ever know? There are few clues from the outside, and they won’t be able to catch him to check. That’s just the sort of mischief we love. 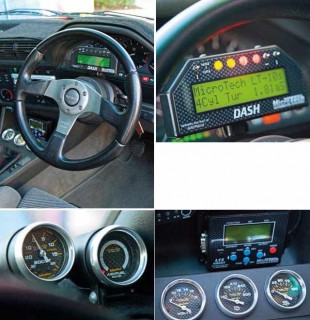 THANKS My wife for putting up with my passion, my brother, my mate Cheez, Dan at GoPipes, Steve at Universal Driveshaft Services, Jerry at Direct Clutch Services

“Boost is supplied by a Garrett GT3082R. It comes on to boost late and hard, which I don’t mind!”