The overwhelming impression of this kit is that it makes the car more obedient and neutral in its behaviour.

When so much work and money goes into the development of a car like the M3 or M4 it’s easy to argue that the car arrives in the showroom in perfect shape, from a tuning perspective. After all, against the billions of dollars that BMW has thrown at the car to make it a world beater, how can the comparatively paltry spend of the tuning aftermarket make it any better? Surely, if there was an improvement to be made, BMW would have done it, no? To a point, that’s true, of course. BMW has done a superb job of making a car that suits all people… and it has achieved it at a price point that many enthusiasts can afford.

And that’s the rub in modern car design, you see. You have to design every component to appeal to the greatest number of potential customers – and then you have to optimise it to achieve the greatest possible quality, but at the smallest possible cost. 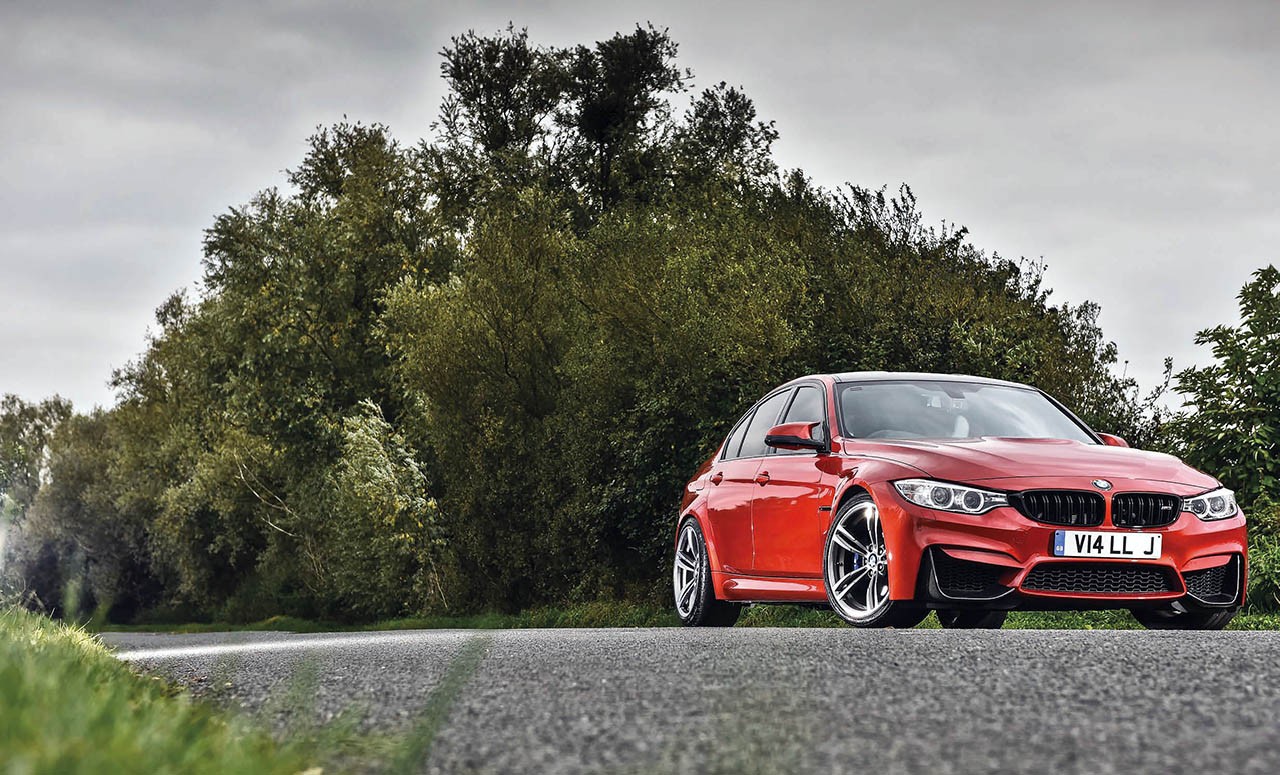 Unfettered by these last three constraints, Gloucestershire-based BMW tuner Litchfield has a much clearer remit when looking to improve the handling and chassis feel of its own M4 and its customer’s M3 and M4s. After acquiring one of the first cars in the UK, Litchfield had plenty of time to rack up road and track miles to see what could be improved. Working closely with World Touring Car Champion, Rob Huff, who is the firm’s official test driver, Litchfield’s R&D team identified that the factory spring rate could be further optimised to give a more precise and rewarding drive without trashing ride quality. On the factory floor the stock spring has to balance legislational ride height restraints, snow-chain accessibility, cobble-stone street testing… you name it. Under Huff’s watchful eye, Litchfield wanted to create the ultimate handling package for road and track whilst improving the car’s stance at the same time, which was somewhat lofty for a near-supercar.

The process began by consulting Eibach springs. The well-respected German company provides the bounce, support and control for many of the world’s finest automotive manufacturers, including the likes of Bugatti and Ferrari. With that level of production and experience at his disposal Litchfield founder Iain Litchfield was free to work from a blank sheet of paper, starting with the factory springs before working through a series of prototypes with Huff.

“We were both looking for different things during this phase,” explains Iain. “Rob possesses an entirely analytical brain during testing and he’s looking for feedback, for marginal handling improvements and for control enhancements. He is able to drive at a level that most of us will never attain so it’s always good to know that the few clients that can achieve that will have the package that they need beneath them. From my side, I’m looking for those traits, too, but from the same viewpoint and at the same level as most amateur enthusiasts that enjoy a track day or a spirited B-road drive. I also want to know if it’s nice to drive to work… or how it feels with the kids and luggage in the back. It’s important to come at this from both perspectives, I think. After all, many M3s and M4s are often the owner’s only car. It needs to retain that all-round ability.”

The result of these dual-inputs, allied to an extensive dialogue with Eibach’s own R&D team, is a spring kit that features a raft of design elements that would doubtless render the kit too expensive to ever be fitted to a volume production car. Purchased as an upgrade from Litchfield, however, they make a great deal of sense. The springs themselves are cold-wound from competition quality chrome silicon steel, before going through a complex hardening process to eliminate sagging or rate change over time. Finally, a sophisticated epoxide coating ensures a long and high-performing life, even during the saltiest of British winters. Every stage of this process has been subjected to the gruelling ISO 9001 quality assurance protocol and a five-year warranty is the result.

Road and track tests revealed the perfect stance on the M3 and M4 chassis would be optimised with a carefully considered 25mm drop up front and 20mm at the rear. Not only does this slight rake give the car a superb attitude visually, but this marginal increase in weight on the front end gives the car much nicer turn-in characteristics. The lower ride height and improved spring rate also helps the M4 to stay flatter in the turns, increasing mechanical grip and reducing load transfer. In short, it allows the already impressive M3/M4 pairing to achieve a simply staggering degree of handling performance on road and track. Most importantly, all parties were keen to ensure that the kit worked perfectly with the sensory software of the factory EDC system, to ensure safe progress when pressing on during fast road driving – as well as making this spring kit a sensible option from an insurance company point of view.

Joining the team on a test session around their Gloucestershire HQ, and later during a track day at Silverstone, it was easy to see Iain and Rob’s differing test approaches in action, although it was also clear that Iain was no mean pedaller himself. Having driven a couple of completely standard M4s we were also keen to see the difference over the standard part.

Eschewing the ribbon smooth Tarmac of the track for the real-world lumps and bumps of the surrounding back roads, it was quickly evident that this upgrade hadn’t spoiled the car’s impeccable manners at all. Working well in all damper modes, the springs made the car feel precise and well measured. Straight line quality was pretty much identical with the outgoing kit but when really throwing the car into the turns, it felt much flatter and more planted, allowing me to balance the car on the throttle through the turns. While we were nowhere near the grip limit of the tyres, Litchfield’s demo M3 really felt as if you could simply point the front where you want to go, with the rear all too happy to follow. The overwhelming impression of this kit is that it makes the car more obedient and neutral in its behaviour as well as being immediately more responsive to steering inputs. Put more succinctly, it feels nicer to drive on the limit, which can be no bad thing given where the limit is on a machine as capable as this one!

In an industry that looks to save every penny possible, it’s easy to understand why BMW didn’t opt for the ‘quality first, cost second’ solution that the kit represents, but when you learn that it’s very sensibly priced at £282 including VAT, (plus £234 including VAT to fit and align it to Mr. Huff’s carefully prescribed settings) then it has to be one of the very first mods that M3 and M4 owners should consider.

As well as trying the car with just its spring upgrade on, Litchfield also invited me to take a spin with its new bolt-on spacer kit fitted. Not only does this help the M3 to achieve a near-perfect stance, with each wheel really filling the arches rather nicely, it also gives the car a flatter, more squat attitude with steering becoming even more responsive thanks to the car’s track measurement being increased. The thickness of these spacers has been carefully optimised for a balance between looks and handling, with the final package arriving at 12mm each side up front and 15mm at the rear. As a simple – and easily reversible – modification, these also make an excellent case for themselves, either on their own or as the perfect augmentation for the spring kit. Priced at £86.40 for the front axle and £96.00 for the rear (including VAT) they certainly tick all the boxes.

Is it possible to make the best better? Well, based on an enjoyable afternoon spent carving through the Gloucestershire countryside with these two small but- perfectly-formed changes, then we would have to say that it is…

Litchfield also has some tasty carbon fibre upgrades available for the M3 and M4 including add-ons for the front spoiler and a rear diffuser. Litchfield called on the expertise of Eibach and WTCC Champ, Rob Huff, to design a set of springs that would improve the M3’s chassis without breaking the bank.