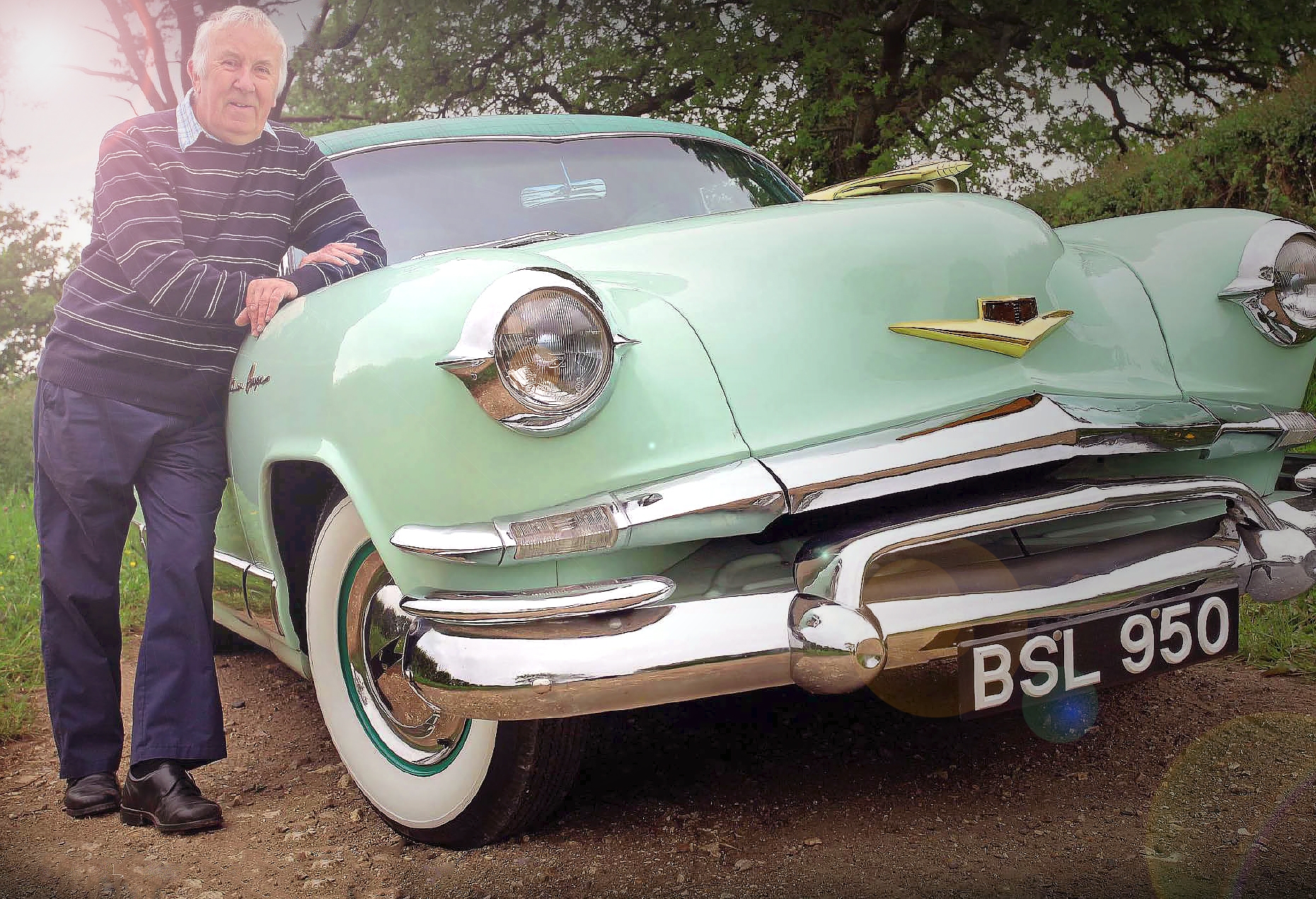 It may not breathe fire, but this green-skinned Kaiser Dragon is so rare that you’d be forgiven for thinking it was a myth. But we’ve found one in captivity… Think of late-Forties and early-Fifties American cars and you often think of humble shapes in the shadow of the show-offs from later in the decade. We don’t see a lot of the earlier cars over here, and those that do get imported tend to be the flashier examples: big Cadillacs, toothy Buicks, Town and Country Chryslers. But the more run-of- the-mill machinery was only just adapting to the novelty of full-width styling, so we wound up with Fords that endured the unflattering nickname of ‘Shoebox’, Lincolns that looked like they’d been in a fist-fight or GM and Chrysler products that hung on to a haunch-like rear wing profile all the way to 1954; a visual throwback to prewar days. 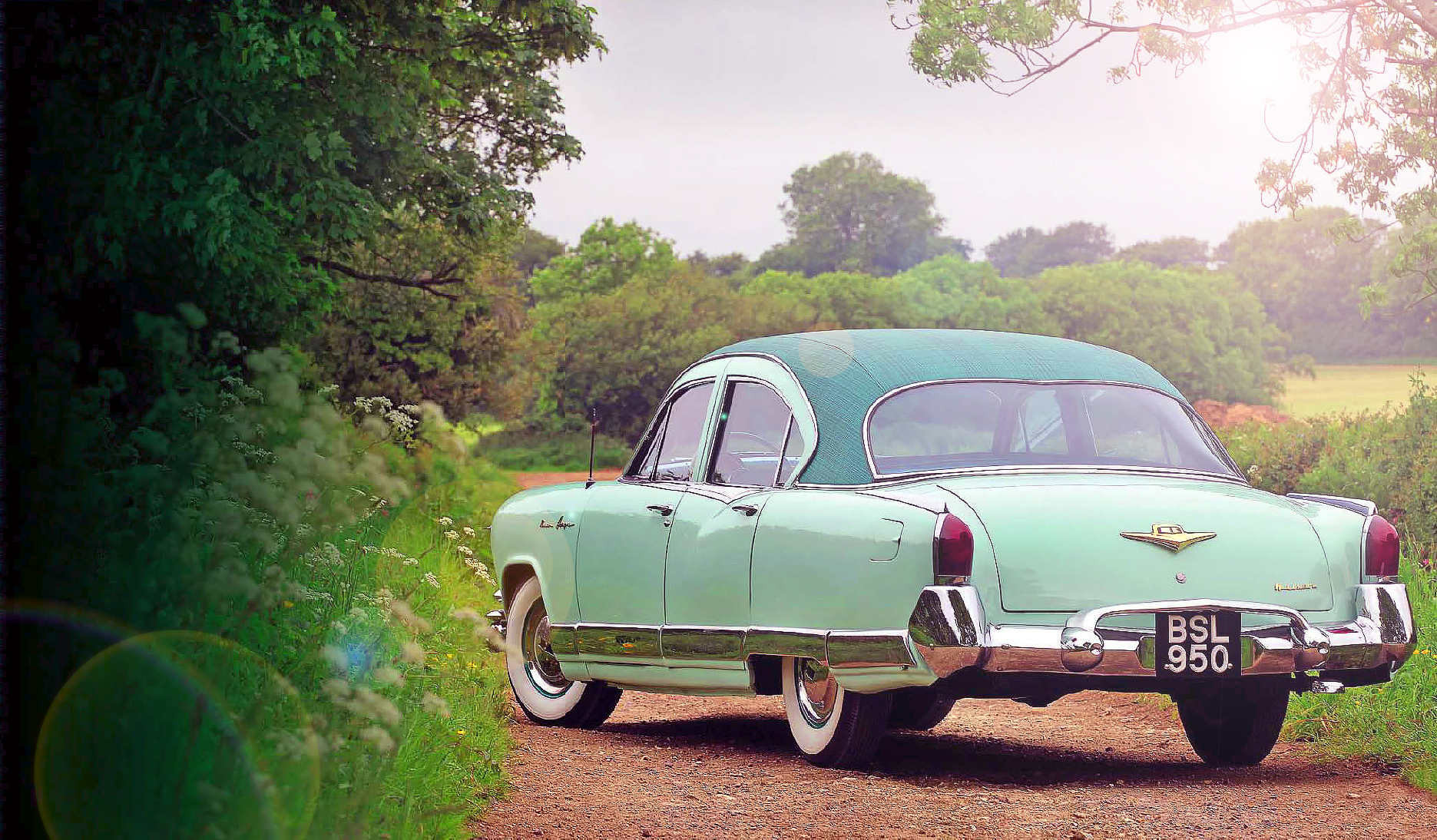 Then you had the less famous names. Nash/Rambler, Willys, Studebaker, Packard, Hudson, Henry J, Kaiser, Frazer and those funny little Crosleys made up a great many sales between them but also exhibited some of the most daring styling. Think of those superstreamlined Nashes and Hudsons, the exotic-looking Studebakers with a jet engine-style spinner on the nose, and perhaps most advanced of all, the Kaiser-Frazer products that appeared from June 1946.

They were the first all-new designs to appear after the War thanks to the whole company being new – Kaiser-Frazer was created by shipping magnate Henry J Kaiser teaming up with ex- Graham Paige executive Joseph Frazer. This gave them a clean sheet of paper, which they handed to Howard ‘Dutch’ Darrin. 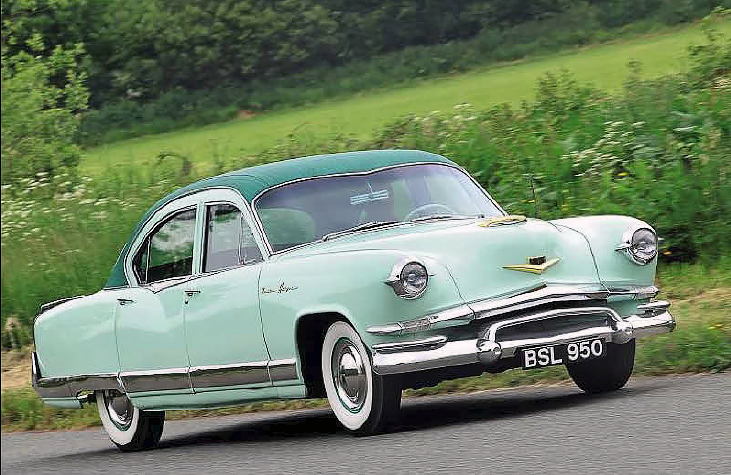 This in turn led to the enviable position that Kaiser-Frazer found itself in come 1950. While most other manufacturers were only just scrapping the last prewar body dies, K-F was re-tooling with Dutch Darrin’s all-new version of his sleek three- box design, this time for Kaiser only. They were on Chapter 2, and the story was really hotting up.

Headline features included the largest windshield in the industry, with the unique ‘Darrin Dip’ in the middle, giving it a kind of heart-shape, reproduced at the rear. The large glass area suggested great interior space, which was no illusion – head and legroom increased and so did comfort, with consideration given to the new science of ergonomics decades before most manufacturers could even spell it. 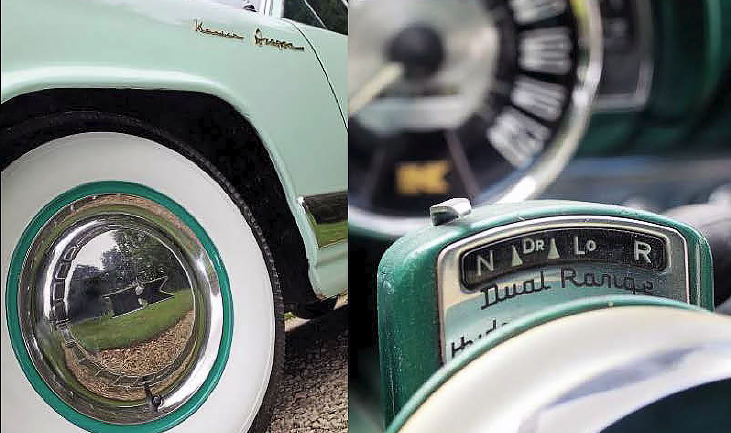 Wide whitewalls suit the Kaiser.Hydra-Matic transmission was bought in from GM.

Sadly, it wasn’t enough to propel Kaiser into the big leagues. Ditto its upscale sibling Frazer, which ceased production after ’51, when Joseph Frazer left. By 1952, cost-cutting measures were reducing the range of Kaiser body styles but the resourceful people at Willow Run in Michigan found another way to keep things exciting.

Enter the Dragon. Now that Kaiser no longer had to worry about treading on Frazer’s toes whenever it drifted up the price range, the marque was free to throw a little luxury around.

They threw it, and it stuck – all $1273.98’s worth of options that were now standard on the new Dragon. The word had been used as a trim package before, but now it was a model in its own right, K530, retailing at $3924. That’s the same as a Cadillac Coupe de Ville and more than a Packard Patrician sedan.

Breaking down all those goodies on the standard equipment list would use up the rest of the article. For now, consider the “Bambu” vinyl (not really a bamboo effect, but a highly textured surface a bit like woven grass or a Japanese Tatami mat) used inside and on the padded roof, Hydra-Matic transmission bought from GM, a personalized glove box name plate for the owner and gold-plated hood ornament and fender badges. Team this with head-turning paint and the extra lick of chrome all the ’53 Kaisers got and you had yourself a genuine stunner.

If it turned heads in America, imagine the effect in drab, black-and-white, postwar Britain. For once we can hear about the impact such cars had first hand, because the owner of this magnificent beast has been admiring similar machines since they were new. David Angel, a ‘war baby’, was soon grown up enough to be an avid reader of the colour advertisements in his father’s Saturday Evening Post. Better yet, Mr Angel senior took the family to Earls Court every year and they went home with arms full of brochures.

“My father bought, fixed and sold American cars when I was growing up,” says David. “He was also a builder but it was the cars that had the greatest effect on me. I was apprenticed to a Rootes garage in Bournemouth as a panel beater and from my teens I was running around in various American cars – spinner-nosed Studies, a ’53 Nash Rambler Country Club, another larger ’53 Studebaker called a Land Cruiser, a ’57 Mercury Commuter station wagon that did 9mpg… there were lots.”

David went on to build a large salvage yard business but kept up his admiration for the elusive Kaiser until 1983 when he bought a Manhattan and began an involved restoration, separating chassis and body. He also added a 1947 Kaiser and then in the mid-Eighties bought this ’53 Dragon from the man who imported it, Luke Arnott.

“The other one I bought wasn’t progressing and this was in better condition, though it also needed work. I’d become friends with the founder of Brooklyn Models and a model was made of my car. They arranged a launch for May 1989 and suddenly I had to get it looking its best. It was restored in four weeks – that’s welding, trim, chrome, paint. quite a lot. But it won a major trophy soon after.”

The story now winds forward 15 years, to David’s retirement and a house move. With a major building project on the go, the car had to sit outside under a sheet, which it ended up doing for several years. Then, with new storage available and life settling down to a happy pace, David was able to see about replacing some of the Dragon’s former glory. He brought his own Kaiser story full circle by handing the bulk of the restoration work to Gerry White, the man who had bought that first Kaiser Manhattan from David just a couple of years previously. “Gerry smartened up the under-bonnet area, converted the car from 6v to 12v operation, he also went through the suspension, steering and brakes and of course he repainted it in jade green.

David Angel behind the wheel. “It was restored in four weeks – that’s welding, trim, chrome, paint… quite a lot. But it won a major trophy soon after…” Bambu’ vinyl used throughout interior. Juke-box like chrome plated heater controls.

“I found the vinyl for the roof from SMS Autofabrics in Oregon, which specialises in rare trim materials, and it was fitted by a professional trimmer. The car’s better than it’s ever been, and I’ve had it for nearly half its life now.”

It is a riotous-looking thing, but somehow it stays just the right side of excessive. It could be Darrin’s clever styling and tasteful, functional dash layout or it could be the limited palette – no mixtures of cream, pink and chocolate brown here. Not that Kaiser was averse to bright hues: in 1951, when the Dragon trim series was introduced, you could order a Golden Dragon (arena yellow exterior with black dinosaur vinyl roof and interior trim), a Silver Dragon (mariner grey with scarlet dinosaur vinyl), an Emerald Dragon (verde green metallic with matching dinosaur vinyl), or a Jade Dragon (tropical green with straw-coloured interior).

What does it all add up to? Well, David reports that at 61 years of age it drives very well, with plenty of power from that 3.6 litre flathead straight-six. But that’s only part of it – this car, thought to be the only one of if its type in the UK, is a key part of a fantastic collection of cars assembled by an owner whose love affair with such things goes right back to the day they were launched. David’s rarities now include a unique ’37 Dodge woody station wagon and the only set of ’58, 59 and ’60 Edsel convertibles outside the USA (as featured in Classic American,). He also restored ’Britain’s finest Thunderbird’ according to Classic American’s Tony Beadle when he featured the car in September 1988.

Most of us got into American cars through films, TV shows, music, a neighbour or a relative, and almost always well after the point when such cars had become classics. David Angel is different – he saw them when they shocked the world, he saw them age and break down, get crashed and chopped up and welded back together, and Anally he saw them as his own pride and joy when they were patiently restored to the condition you see now.

Perhaps we can learn from this. When cars this good are almost forgotten, it’s time to look beyond the obvious choices and start a quest to And our own personal dragons.

The 1947 model year for Kaiser-Frazer figures nowhere on the map of motoring history, which is a travesty. It was a giant leap forward in automotive styling because it showed us how cars would look from then on.

Even today, you see the same styling principles: the line of the front wing no longer stopped in the door or trailed away to ground level, but ran all the way along through the doors, the rear wing and right down to the back bumper. It looked like British cars still looked when we were launching new models up to 10 years later – picture a Riley Pathfinder, a Wolseley 6/90 or a Singer Hunter.

The man behind the design was Howard ‘Dutch’ Darrin, formerly of the coachbuilding firm Hibbard and Darrin. His design won Kaiser-Frazer Grands Prix d’Honneur at concours competitions at Monte Carlo and Cannes. The occupants were now entirely within the axle lines for greater comfort and they were given a compartment as wide as the wheel track for space, plus an elongated, enlarged trunk.

In short, Darrin had invented the ‘three-box’ shape. The two marques, Kaiser and Frazer, shared the new bodyshell across different price points and between them sold nearly 100,000 units in a year. Deserves a little more fame, doesn’t it? 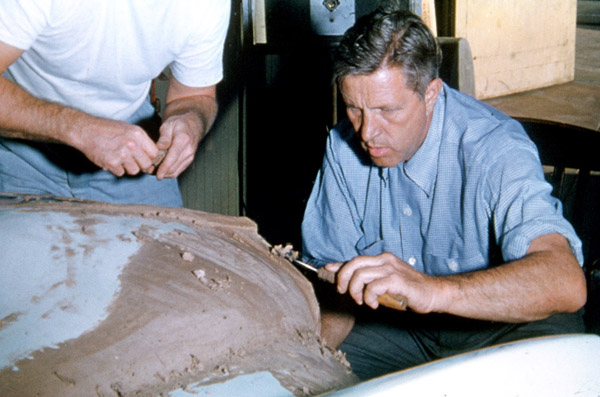