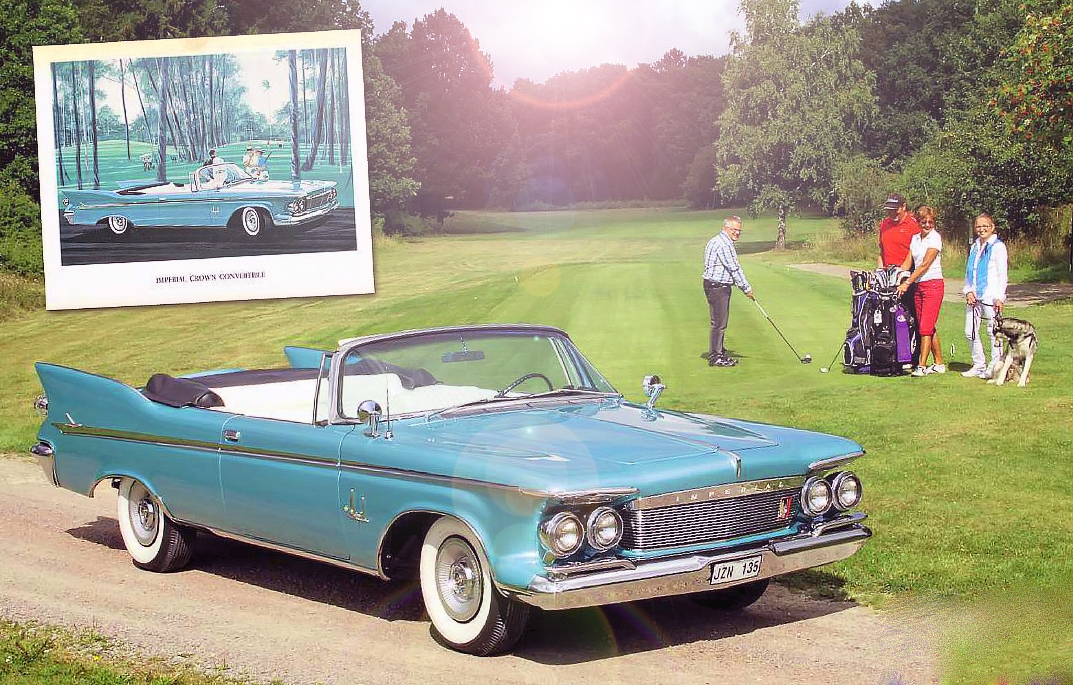 To much is just enough – 1961 Imperial. Chrysler’s luxury division, Imperial, was never a roaring success and was eventually re-absorbed. But at its best, it produced some of the boldest and best-made cars in America. Cars like this 1961 Crown Convertible which won best in show at last year’s Power Big Meet in Vasteras, Sweden…

Someone at the Chrysler Corporation forgot to read the memo. Everyone else in the industry seems to have pulled in their horns after 1958, when a drop-off in new car sales caused a rush to tone down the fins and phase in the compacts. Of course these changes took a while to work through, hence the zenith for fin lovers that 1959 brought along, but by 1961 you had to hunt pretty hard for the kind of lavish styling treatment that was so commonplace a couple of years earlier.

In truth, even Chrysler couldn’t ignore the prevailing wind. Dodge and Plymouth models of 1961 were relatively clean and sober, with vestigial fins on the Valiant and some strange backwards versions on the Dodges. Elsewhere, Rambler, Ford and Mercury were hedging their bets with similarly apologetic little fins while Buick, Chevrolet, the small Fords, Oldsmobile, Pontiac and the four-door Studebakers all eschewed them completely. Only Cadillac, Chrysler, De Soto and Studebaker’s Hawk models were still flying a fin-shaped flag. Oh, and Imperial.

You really couldn’t ignore Imperial. The luxury division still seemed to be firmly in the grip of excess, be it in size, use of chrome or sheer boldness of styling. There they were, like the fired-up partygoer still dancing and mixing cocktails at 3am when everyone else is ready for bed. For this alone you have to love their ’61 models.

There’s so much about them that’s more in line with a Fifties ‘idea car’ or styling concept. The ‘Jetsons’ feel is alive and well – just look at the dashboard.

Want your instrument switches and gear selector in pods either side of the steering wheel? Fine. Want a clock like a gunsight where the column meets the dash? No problem. In fact, why have a round steering wheel when you can have a soft rectangle that looks like it belongs in a personal jet, or perhaps an expensive speedboat?

We haven’t even got to the outside yet. The front and rear lights float separate fromthe body, the headlamps resting neatly between upper and lower chrome eyelashes. It’s a look that Imperial had been evolving since 1957, when the headlamps were contained in a moulding that had more to do with the bumper than the front wings or front panel. They continued with the look right through to 1963, even after more outrageous aspects of the body design were shelved. It was such a recognisable eccentricity that Imperial’s stylists wisely allowed it to become something of a visual trademark.

The idea, if not the specific design, came from Virgil Exner. The front and rear of the ’61 models were extensively reworked from the 1960 cars as Exner was searching for something that would call to mind a prewar classic look. Just how it happened and who was responsible seems to vary from one person’s account to another, but the gist of the story is that Cordon Buehrig’s Cord 810 of 1936 was taken as inspiration for a centred grille forming a wider, flatter and more modern take on the ‘coffin nose’ look. The floating headlamps allowed an almost gull-wing front fender and were themselves a reminder of the headlamps-on- stalks days Exner was trying to echo.

The middle of the car didn’t change from the 1960 models, the two-and four-door hardtops carrying the same side-panels in the roof above the doors and a kind of faux three-quarter hood containing that wraparound rear screen. The fact that all the closed cars were pillarless helped a bit, but to modern eyes they seem to have rather too many styling quirks packed on to one car, even on that spacious 129in wheelbase. Take the roof off and lose a pair of doors, and the problem goes away.

Just one look at the car in these pictures ought to tell you that. It’s a terrific expression of Exner’s preferences, with a frozen-in-flight look created by those long flanks with their dashing feature line. Viewed from a front three-quarter angle, the moulding seems to be descending from the eyebrow to just above the rear bumper, but look at the rear three-quarter view and the moulding seems to be horizontal thanks to the car’s tail-high stance.

The owner of this car found himself with the most elegant of the eccentric ’61 models more or less by accident. He’s Lars Hjelm from Ludvika in Sweden (yes, it’s another astonishingly good restoration from Sweden) and he has form with fringe-interest Mopars. During the Nineties he restored a 1955 De Soto coupe; a handsomely restrained bit of styling you’ll be able to picture if you can call to mind a Chrysler C-300. This car became a consistent show winner, but when it was done and the warm glow began to wear off, inevitably Lars began to look for his next project.

He also had a 1960 Imperial four-door in good condition, so he knew the marque and was keen to get something similar to work on. Lars liked the cars’ high quality of build – each was test driven before delivery, having passed 32 quality control stations to get even that far. Chrysler was keen to re-establish the top marque’s reputation after the company felt the sting of customer dissatisfaction thanks to some badly-built products in the Fifties.

That’s not to say that 1961 ‘s cars lasted indefinitely. When Lars found this convertible in America back in 1996 it needed a total restoration. This family of Imperials reverted to body-on-frame construction rather than Chrysler’s early-adopted unit body, which probably saved this car. There was rust in the floors and elsewhere, but the chassis frame was solid enough. At least structural worries would be kept to a minimum.

That’s not to say it was an easy job – there was no interior left and numerous small, hard-to-find parts were absent without leave. To give you some idea how hard it is to find spares for these cars,

Lars eventually had to track down and buy several four-door donor cars to get good parts from, plus one more convertible with a complete interior. Unsurprisingly, the thought of destroying one convertible to save another didn’t appeal much, so Lars was able to hang on to it until he could eventually secure a complete spare interior that didn’t involve scrapping another rare Imperial.

Of course, this landed him with a duplicate restoration of the first one, but once you’ve got one 1961 Imperial Crown convertible under your belt, another one doesn’t seem so hard.

Especially if you’re only aiming for ‘driver’ status this time… but we’re getting ahead of ourselves. Lars did much of the work himself but was happy to call on some skilled friends and professionals when required. One example of a more specialised task he had to farm out is that padded dash, remade from the bare bones by just Dashes in Van Nuys, California (see www.justdashes.com). They make a point of using only factory correct vinyl colours and grains, which chimed with the standards Lars was setting elsewhere. Not everything had to be sent Stateside – he had a new wiring loom made up by a Swedish company and all the instruments were refurbished locally too.

Much of the 15-year restoration was punctuated by the arrival of scarce NOS trim parts turning up, or else the rechroming of anything Lars could rescue and couldn’t replace. And there’s a lot of shiny stuff – maybe less so than the Fifties cars, but still plenty. Imagine trying to get little parking dings out of that huge side-spear, or the corners of those sizeable bumpers. The cosmetic job was finished in teal blue metallic, the colour this car has worn since new. It happens to be the same colour as the one featured in the 1961 sales brochure, which was the motivation behind shooting this one on a golf course: a similarly suave location was used in the photos from the brochure.

Finally, early in 2011, Lars woke up one morning to the knowledge that the car was finished. For the first time in decades, this one of only 429 Crown convertibles produced in 1961 took to the road again. If it’s impressive today – and trust us, it is – what must it have been like back then? Big, potent V8s were the norm for luxury cars, but even so, a 350bhp, 413cu in big-block motor gave the Crown rag-top an unseemly turn of speed. The transmission was the best three-speed auto of its day, the A-466 version of the TorqueFlite.

The options on the car were extensive, considering how much came as standard. You got power steering and brakes, power seat, a vanity mirror, carpeting, power windows and an outside rear view mirror without having to pay extra. If you added the ‘decor group’ option, you also got a manual wing mirror on the right-hand side, stone shields, sill mouldings and that astonishing ‘Flitesweep’ deck lid. It wasn’t much use shopping at Imperial dealerships in 1961 if you were the shy, retiring type.

Fortunately, Lars isn’t. He took the car to the Power Big Meet at Vasteras in southern Sweden in 2011 and walked away with best in show. If for Imperial sales rep.

you’re not familiar with this show or the kind of cars it attracts, it’s fair to say there isn’t an American car event anywhere in Europe that could claim a more impressive standard of concours cars. Classic American has featured a few really outstanding Scandinavian and European restorations in recent years, so we’re not going to wear out the same old superlatives… the important thing is that people like Lars are still pouring their time, money and effort into reviving amazing cars like this that add so much to our scene.

Anyway, you probably know how jobs like this are accomplished – all you need is infinite patience and a refusal to accept anything that isn’t perfect. As hinted at above, Lars is restoring a second convertible that he’ll feel more comfortable actually driving and using, but a quick look at his first effort suggests it’s not exactly going to be scruffy. It would be interesting to pass both cars through those 32 separate quality control stations at the Imperial plant in Trenton, Michigan, with their 600-plus tests and inspections. We suspect the boys with clipboards and white coats would be blown away.

Imperial displays the last of Chrysler’s fins. By 1962 they had disappeared completely.

…Most of which was spent sourcing hard to find parts.

Tail-lamps ‘hang from the tail fins.

A donor 61 convertible was sourced for its interior.