We get behind the wheel of Running Reporter Jason Burrage’s DeHavilland DVT GTS.

You can tell that Jason Burrage took replicating the Dino 246 GTS seriously by one key omission – Ferrari shields on the wings. Even owners of genuine Dinos can often fail to resist adding prancing horse emblems… but the Dino brand stood on its own two feet and the cars left Maranello with no Ferrari badging at all. And the car bears much closer scrutiny than that… the more you look, the more details you find that show just how far Jason went in making his DeHavilland DVT GTS look as close to the original car as possible. Some of it is pretty shrewd, too; the hands-free microphone, for instance, looks like the dashboard light dimmer switch in the original car.

Regular readers will already be familiar with Jason and his DeHavilland as he has been a Running Reports contributor since 2015, and his car appeared on our stand at the Stoneleigh show earlier this year. He actually started stripping the donor car in 2014 before the kit arrived in early 2015, but since the construction has been documented we needn’t cover that ground in detail now. If you’ve followed the story, you’ll know that Jason’s attention to detail has been almost infinite – and it certainly shows in the finished car.

The build took two years longer than his Pilgrim Sumo and Jason points to three key reasons for the Dino’s greater complexity: doors, interior trim and a close eye on replication. Getting the doors to fit correctly took a lot of fine-tuning, because they have to align not only within the door shut itself, but also with the quarterlights, targa top and electric windows, all of which introduce variables in angles and dimensions. The end result was worth the effort, though; the fit is perfect and they shut with a satisfying clunk.

Interior trim is another area where the DeHavilland is more ambitious than many kit cars, and that goes hand in hand with Jason’s desire to make the car as close a replica as possible. “I was trying to create a true-to-the-original replica,” says Jason, “so I could never just think ‘that can be a flat panel or this can be a simple thing’. If you’re building a car that’s not a replica you do things that are convenient.” DeHavilland’s Terry Groves recommended the book Dino Compendium by Matthias Bartz which has detailed specifications on all Dinos, as well as lots of photos to refer to, which make the details just right. For Jason, it was a constant source of instruction to create a replica of a late 1972 or early ’1973 GTS. 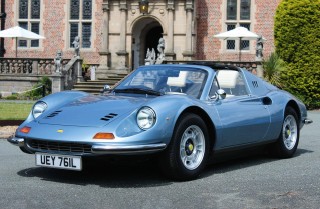 It was from the book that Jason learnt where to position that aforementioned hands-free microphone. In a similar vein, the original Dino’s dashboard has four knurled screws that hold it together. In Jason’s car, the lower two are there, but the upper two double as warning lights, the remaining lights being stealth black ones that are almost invisible until they light up.

Furthermore, he moulded his own inner windscreen panel to ape the original, modified the glovebox lid and got hold of the original heater controls. Wherever he could, Jason sourced original Dino parts, things like the boot, bonnet and fuel filler release not coming cheap but adding to the car’s authentic appearance. Jason did allow himself a modern stereo, but argues that many original Dinos have been similarly upgraded. On the exterior, you’ll find original tail lights, grille and bumpers. He also bought a L-suffix plate, and since it didn’t matter what the reg actually was (any K or L-reg would have done the job) it was a bargain.

One thing you’ll definitely know if you’ve been following Jason’s Running Reports is that he has a Rover KV6 engine fitted, and is the first DeHavilland to be completed with that installation… usually they have the four-cylinder K-series that comes with the MG TF donor car. Getting the V6 to work within the confines of the MG subframe and DeHavilland body called for some extra engineering, not least deleting the air conditioning and relocating the alternator. Jason has also fitted throttle bodies, which has upped power to 229bhp.

Making a more attractive airbox is on the to-do list, as it tweaking the H-gate to allow enough throw for fifth gear and lowering the KV6’s idle speed. By and large, though, the car is ready to be enjoyed, and Jason clocked up over 2000 miles in the first few weeks of the car being on the road. And regular use is exactly what’s in store – Jason will be commuting in the car as much as possible, and not just in the summer months. It’s practical enough for regular, year-round use and that’s precisely what Jason has built it for. You won’t see many real Dinos out in the snow, but there’s every chance you’ll see this DeHavilland out in even the worst weather.

There were no such concerns on the blue sky day of our photoshoot, though, and once the photos were in the bag Jason offered me the keys for the drive back. With the roof panel stored behind the seats, legroom is quite limited. Fortunately, Jason and I are about the same height so it didn’t present a problem, and in all other respects the cabin is quite spacious – footwell and shoulder space both being quite generous. In fact, the car is easy to live with – good visibility and light controls contributing to its daily use credentials. DeHavilland removes the power steering from the MG column, but Jason found a way to keep it, which is a good move. Similarly, he has added servo assistance for the brakes. He wanted the car’s main controls to feel like those of a production car, and he’s hit that target. Similarly, there is a complete lack of squeaks or rattles in the cabin that contribute to a feeling of solidity.

All of which means you can enjoy listening to the V6’s chorus, which does a surprisingly convincing job of sounding like a genuine Dino. On the way to the photoshoot, when Jason was driving, he said he couldn’t resist encouraging the pops and bangs on the over-run, and I find myself doing the same at any opportunity.

The car’s is brisk, but the real appeal is in the way it goes about its business. It has a great mix of modern and classic traits; modern in that it tracks straight, stops well and is easy in traffic, and classic in the way the controls feel. On the other hand, the thin-rimmed, large diameter steering wheel feels wonderful old school, as does the long-throw gearlever through the exposed gate. The cabin ambiance and view across the curvy wings add to the feelgood experience, too.

There’s no doubting that Jason has gone to lengths that many builders would not, but the finished result shows that in spades. The fit and finish is flawless, and the dynamics are cohesive. The fact that it’s wrapped in a package that can be used regularly makes it an unusual proposition in today’s kit car market, and one that has broad appeal. 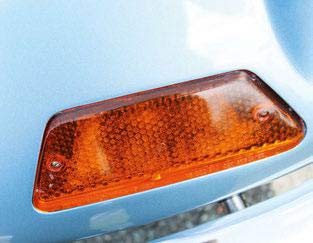 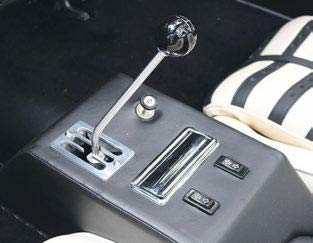 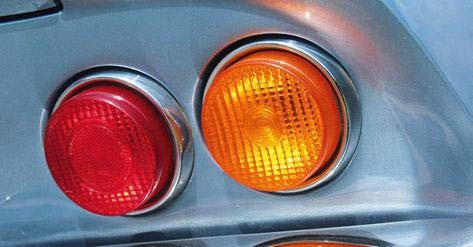 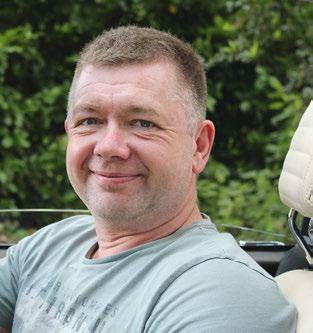 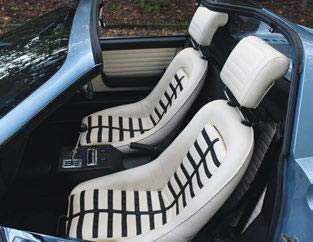 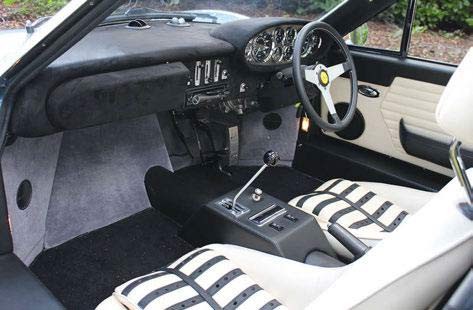 Tail lights are one of the many original Ferrari parts fitted… …others are indicators, grille and bumpers. ABOVE: With Jenvey throttle bodies and Omex management, Rover KV6 produces 229bhp. RIGHT: Remaking the airbox is on the to-do list. Open gearlever gate is very evocative. ABOVE: Interior very closely replicates that of the original Dino. LEFT: Intatrim seats look the part.

“IT’S PRACTICAL ENOUGH FOR REGULAR USE, AND THAT’S WHAT IT HAS BEEN BUILT FOR”

WHEELS AND TYRES: 15in replica alloys with 205/65×15 Michelin CrossClimate tyres.

Best thing about the car: Too many to mention!

ALSO IN THE GARAGE…

In stark contrast to the Dino, Jason’s Pilgrim Sumo doesn’t set out to be a replica of an original Cobra. With this car, he has revelled in going his own way, as you can tell by the paddleshift transmission. It’s Jason’s second Sumo (the first one was sold because it wasn’t being used enough) and the two and a half year build was completed in May 2012.

The Chevrolet LS3 engines drives through a gearbox with paddleshifts, and it’s here where the Sumo wears its non-replica status on its sleeve. The paddleshift kit required a manual shifter to move between park, reverse, neutral and drive, but Jason didn’t want a big clunky shifter in the middle of the car. He explains: “I came up with a waterproof industrial servo unit that sits under the chassis and it operates a cable to the transmission and used a micro processor to control the different positions based on the button presses.”

The buttons themselves are Savage switches, but he removed the tops and had discs laser cut with PRND and glued them back in place. They’re dim-lit when the car’s lights are on, with the one selected appearing brighter.

It’s not the only area where the car is highly bespoke. Jason’s wife Kseniya – who often drives the car – didn’t like the mechanical heater control and asked him if he could do anything better. He could. It’s now controlled by an LCD screen with buttons either side. The bezel is laser cut, and the RS Components screen uses a microprocessor that Jason programmed to run the controls, display and graphics. There’s not another one like it anywhere.

The paddleshift itself came from an American supplier and, while it wasn’t cheap at £3000, it can handle up to 1000bhp and has a lifetime warranty. It has a lock-up torque converter using a clutch, and you can programme when it locks and unlocks. You can also tune when it changes gear in automatic mode and how it reacts to the throttle, and it can all be mapped offline and then flashed to the transmission control unit (TCU).

And Jason finds that he more often drives the car in auto rather than shifting gear with the paddles. He offered me a drive, and I too found myself letting the car make the decisions. The reality is that the car is still rapid and, while the auto box gives it more of a cruiser character than it would have with an H-pattern manual, you can still revel in its performance. I didn’t miss changing gear myself as much as I thought I would.

ABOVE: Unlike Jason’s DeHavilland, the Pilgrim doesn’t attempt to be a replica. LEFT: Bespoke digital heater controls. BELOW: Chevy LS3. Paddleshift rarely used in favour of auto. Modified Savage switches for PRND.