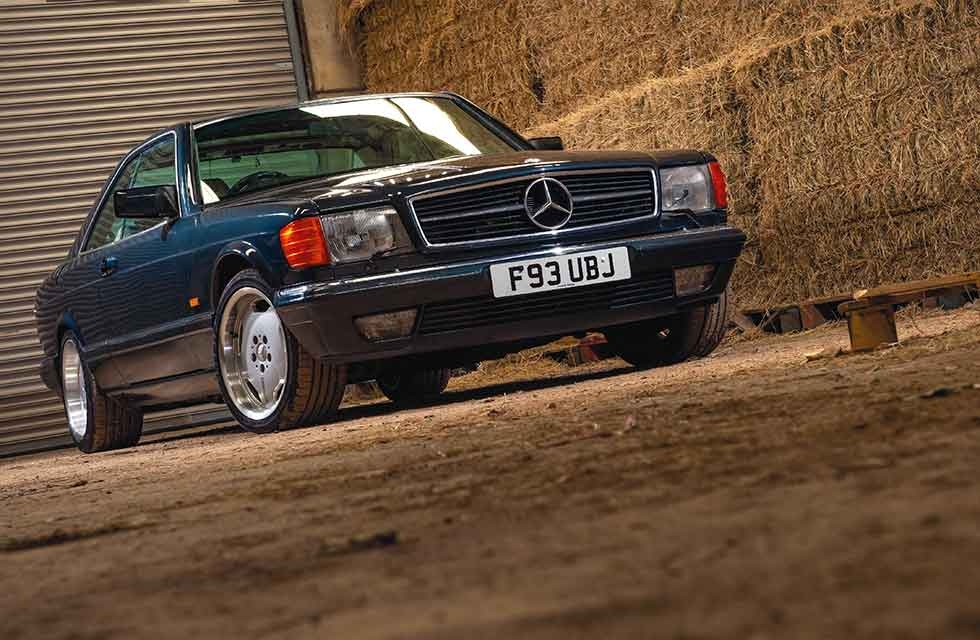 His finances may have suffered a serious setback, but that didn’t stop. Formula One ace, James Hunt, from enjoying this 1989 Mercedes-Benz 560 SEC C126. Words Dan Furr. Photography Dan Sherwood.

When the 45-year-old James Hunt died on 15th June 1993, the 1976 Formula One champion’s personal fortune had been hugely reduced as a consequence of the Lloyd’s of London scandal of the late 1980s. In essence, Hunt and many other then-wealthy investors (including high-ranking politicians, sports personalities and even members of the British monarchy) pledged large amounts of cash to the insurer, effectively acting as underwriters for future liabilities. The financial reward Lloyd’s promised was high, but relationships turned sour when investors found themselves liable for a colossal number of new claims relating to past incidents. Chiefly, complaints from applicants concerned exposure to asbestos experienced in the workplace as far back as the 1940s. Not only did American courts rule individuals could claim, permission was granted for them to do so regardless of whether they were suffering symptoms of illness. The floodgates opened.

Many investors (known as Names) faced financial ruin. Five hundred were bankrupted. Fifteen committed suicide. Even today, legal battles continue between Lloyd’s and many of those who gave the three-century-old institution the majority of their amassed wealth. Hunt lost close to £200k, a significant sum today, let alone three decades ago! This serious dent in his finances saw him flirt with the idea of mounting a racing comeback in 1990 as a driver for the Williams Formula One team. Testing followed, but move wasn’t to be. Instead, the eccentric sportsman relied on a steady stream of income from the BBC, for whom he’d acted as media commentator for Grand Prix racing since his shock retirement from the sport in 1979.

When it comes to the cars Hunt drove, two obvious images spring to mind. The first is of his Cosworth-tuned McLaren M23, the F1 machine he raced to victory in the face of stiff competition from the radiant red Ferrari 312 of Niki Lauda. The pair’s on and off-track relationship has since been immortalised in the Ron Howard movie, Rush. After the Lloyd’s scandal, however, the vehicle he was most commonly associated with was GDX 294E, a tired 1967 Austin A35 van. Hunt used the 848cc load-lugger to carry his beloved budgerigars to shows. The four-cylinder cargo carrier fetched £13,000 at the Silverstone Classic auction in 2011 after being bought by the seller for £3,500 at the Brooks Olympia sale in 1993, yet vintage vans and championship-winning race cars weren’t the only four-wheelers Hunt had a passion for…

Parked on the driveway alongside the A35 at Hunt’s London home, NLT 935V was a familiar sight to visitors popping in to see the living legend when he wasn’t in the commentary box rubbing shoulders with Murray Walker. Taking the form of a brown 450 SEL 6.9 W116, the V8-powered four-door featured the largest engine of any production car outside of America when originally built.

Right Top and bottom halves of the exterior are now colour-matched, while each corner rides on a staggered AMG rim Below Mushroom hide has been cleaned and recoloured. Top “It’s what James would have wanted!” Above Copy of original V5 shows James Simon Wallis Hunt as the first owner of this superb C126 560 SEC Facing page Interior has been tidied due to cracks in leather.

Weighing in at two tonnes and measuring almost eighteen feet in length, the large barge’s scale was as impressive as its technical specification. There was only one snag: the example Hunt owned was perched on bricks and in need of full restoration. He bought the mighty Merc when it was less than a year old, but by the time he was driving around in the A35, his fortunes had changed so radically he wasn’t in a position to treat the land yacht to the attention it was in desperate need of. Thankfully, he had F93 UBJ for fast-road fun. A 1989 560 SEC, the Blue-Black two-door was registered to Hunt from new, thought to be a gift from a generous benefactor.

Hunt kept the 5.5-litre coupe for two years before it passed through the hands of several owners, garnering numerous plate changes along the way. The car also found itself riding on a set of staggered AMG deep-dish wheels and had covered 143k miles before coming into the possession of Fraser Pemberton, a restorer of German sports cars based in Cheshire. “My team recommissioned the low mileage 1977 450 SEL owned by Bee Gees frontman, Barry Gibb, for thirty-one years,” he tell us, referencing the white whale which sold for £17,600 at the Classic Car & Restoration Show at Birmingham’s National Exhibition Centre in March. Since that time, his band of Mercedes-keen merry men have been working on a selection of other interesting Benz-badged beasts, not least of all Hunt’s SEC.

“You have to keep an eye out for corrosion when it comes to the W126 range,” continues Fraser. “Front wings and the boot wells are usually the first places to go. The Hunt car was no different.”

Fortunately, the previous owner supplied a new genuine offside front wing to replace the original panel, which was suffering from corrosion at its base. In contrast, the exposed inner metalwork looked brand new when the old wing was removed.

The discovery came as huge relief to Fraser and allowed his team to concentrate on fixing faulty electrics and restoring the car’s interior. “It was apparent the car had been looked after, but I wouldn’t say it had been cherished,” he reasons. “The self-levelling suspension worked without error and the engine was in excellent working order when I took delivery of the car. Its Mushroom leather, on the other hand, showed clear signs of heavy use. The hide was creased, cracked and exhibited signs of poorly executed past repair work. We had no choice but to strip it back before attempting to right its many wrongs.”

A new headlining was required, the sunroof didn’t work and the seat belt butler motors were in need of overhaul. It was a similar story outside the car, where headlight wipers weren’t operating as Mercedes intended. Additionally, replacement rear wheel arches showed signs of a poorly executed respray. A fresh coat of colour was deemed necessary (“we added an extra ten percent black!”), which covers the whole of the body, while replacement exterior trim and a fresh windscreen were fitted in advance of the car’s star turn at the Brightwells Leominster auction in September. “I’d already lined up an exciting W108 restoration project before finishing work on Hunt’s SEC. The newer car had to go!” beams Fraser, quietly happy at the cool coupe’s auction sale price of £14,000. A healthy service history coupled with paperwork proving the charismatic motorsport star’s ownership was undoubtedly one of the key attractions for eager online and in-room bidders, not to mention the fact it was revealed the car would be the lead feature in this issue of Mercedes Driver. “It makes a nice addition to the history file, and further emphasises the serious provenance of this particular 560 SEC,” muses Fraser, satisfied at being able to play a part in ensuring the long-term survival of a magnificent Mercedes first owned by one of Britain’s best-loved racing drivers.

James Hunt began his racing career in touring cars before progressing to Formula Three, where he succeeded in attracting the attention of Lord Hesketh, the owner of Hesketh Racing, an independent motorsport team. Hunt first competed in Formula One for his new employer in 1973. He won many races for the Hesketh concern, but overall championship victory evaded him until he signed for McLaren in 1975. In his first full year racing for the team, Hunt won the drivers’ championship, a hard-fought battle which cemented his place in history as one of motorsport’s greats. His controversial behaviour on the track earned him the nickname ‘Hunt the Shunt’, while his turbulent lifestyle made him a regular feature of the mainstream media.