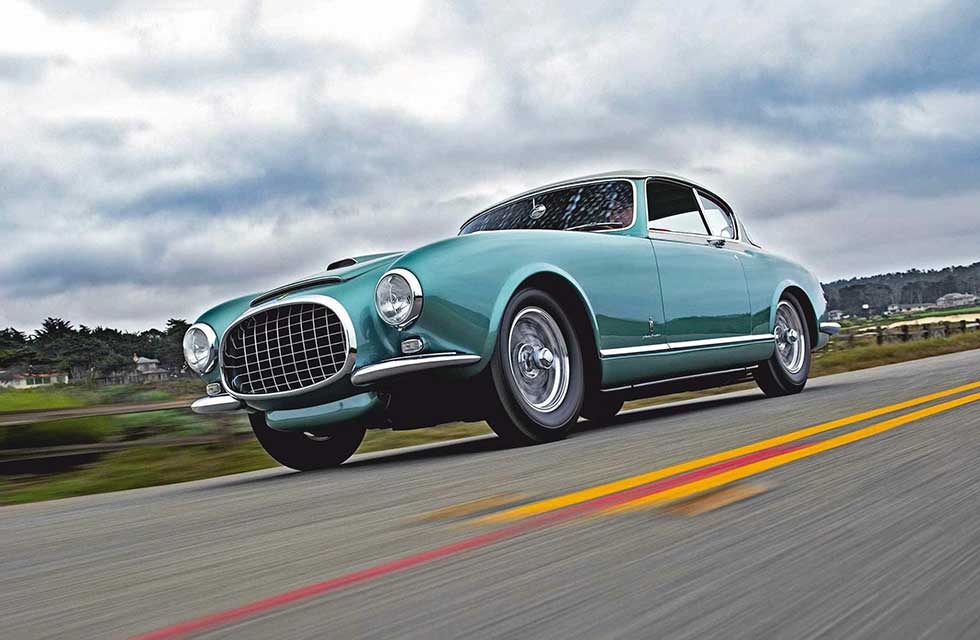 In 1952, Enzo Ferrari had too many racing engines on the shelf, so he built road cars around them, and sent them across The Pond – including this 342 America. Words Massimo Delbo. Photography Dirk de Jager.

What Enzo did with his spare race engines

Today we are used to thinking of Ferrari a rich company, with endless money to invest. The situation was very different in 1947, when Enzo Ferrari funded his firm with the idea of making cars for racing and the road. Money was scarce, not only for Enzo himself but for the whole country, which was struggling to recover from World War Two. And money wasn’t the only problem: the process of industrialisation was hampered by the scarcity of both raw materials and undamaged factory buildings.

The first engine installed by Ferrari in a car bearing his name – the 125 – was a 1.5-litre V12. But what’s really astonishing is that, just two years later, Ferrari was making a 4.5-litre V12, designed by Lampredi, to be installed in Formula 1 cars and capable of winning the 1951 World Championship. When the 4.5s were banned for 1952 in favour a 2-litre limit, Ferrari found himself with a warehouse full of big, powerful engines, but no way to use them. Whether Enzo himself or one of his men had the idea we don’t know, but a radical solution presented itself: that racing engine, lightly detuned, would form the heart of a new Gran Turismo, named in celebration of the most important potential market for Enzo Ferraris cars.

And so the 340 America arrived, 24 of which were built. Ironically, Ferrari was well aware of the racing potential of this vehicle in the sports car category, and he knew that success in racing would mean success in sales too. The 340 America and its subsequent siblings the 340 Mexico and 340 MM were seen as pure racing thoroughbred GTs, so they were built with even chassis numbers, the symbol of racing Ferraris. But while the 340 was as fast as a pure racing car, its finish lacked the luxury required in the GT market. Its road manners were distinctly sporting too, and Ferrari feared that Americans would not appreciate a car quite that wild.

Which is why, in early 1953, the 342 America was created: in effect a gentler, more refined 340, with dry-plate clutch, synchronised gearbox and a longer (2650mm) wheelbase suited to (fast) road use. Yet the 342 was manufactured with even serial numbers too, despite its more luxurious trim and finish, and only six were built, all but one bodied by Pinin Farina, the first (chassis 0232 AL) was a cabriolet by Vignale, then there were two cabrios (chassis 0248 AL and 0234 AL, the latter for King Leopold of Belgium) and three coupes (0240 AL, 0246 AL and 0242 AL), each of them different in detail.

The car you see here is the second of those Pinin Farina coupes, and the last to be built in 1952: chassis 0246 AL. ‘AL’ signifies it as an America Lungo, referring to its extended wheelbase, and it was formally completed on 30 December 1952, just weeks before 0242 AL, which was registered in the name of Commendatore Enzo Ferrari on 14 January 1953. Today it belongs to California collector Bruce G Vanyo.

In the factory build sheet, this car, with body number 10948 assigned to Genoese ship-owner and insurance entrepreneur Ernesto Fassio, was marked Speciale, with two-tone coachwork in green/grey-green. The Fassio family was an established Ferrari customer, and both Ernesto and his daughter Franca, born in 1926, had several Ferraris registered in their names, usually custom-finished, the 342 Pinin Farina Coupe had the additional honour of being displayed at the 1953 Geneva motor show.

An internal note reveals that the rolling chassis left the factory for Pinin Farina on 23 December 1952 – without being tested, the earliest build sheets are related to the engine and dated early December, when it was completed by technicians Storchi and Leopardi. During running-in it was noted that the engine lost oil from the flywheel side, resulting in low oil pressure, and that there was a coolant leak too, but everything was fixed for the second check, four days later.

Following the Swiss show in March, the car was delivered to its owner, but there is a surprise in the legal documents, the factory released the certificate d’origine on 14 April 1953, and the car was registered the day after with the plate MO 29677 – in the name of James Gerald Murray Jr, an American from Pittsburgh, formally residing at the Automobile Club of Modena address. It was he who, in February 1954, returned those plates to have the car exported.

Fassio had ordered the car, kept it at his home in Genoa and raced it in the Rallye du Soleil-Cannes in April 1953, but it is not clear if it was supposed to belong to the father or the daughter. A custom request included small, folding, leather-covered platforms behind the seats, where Franca Fassios dogs could sit, and it’s certain that she liked the car a lot because, soon after, she went on to order a 375 America, chassis 339 AL, with the same finish and split front bumpers.

Also clear is that Ferrari had built the car with some racing-spec equipment, including a 92-litre fuel tank (usually supplied to endurance and rally cars), a more powerful engine with 235bhp instead of the standard 200bhp, plus two sets of wheels (for road and racing use) and a rally timer, which is still in the car today.

It returned to Pinin Farina later that year to be transformed with black paint, a new single front bumper and a revised rear window (from wraparound to rectangular), Thus modified, it arrived in the USA and, in the spring of 1954, New York City dealer Max Hoffman sold it to Steve Briggs of Lake Forest, Illinois, who promptly showed it at the Wilmot Hills Concours and won the sports car class. In 1956 it was sold on to William R Peters of Minnesota, who kept it for the next 33 years. By 1989 the odometer read a mere 43,168km and, via several more owners in Europe and the USA, and some inaccurate restoration work, in 2012 the car entered its current ownership.

‘I had other, less important cars,’ says Bruce Vanyo, ‘but the opportunity to buy such a rare Ferrari, in very original condition, with all the correct numbers, doesn’t happen very often and I decided to go for it. I saw it at Brian Hoyt’s shop and it was the first time I had heard of a 342 America. I did some research and discovered how special these cars are. I didn’t have a plan, but I knew from day one that it wasn’t going to be a short-term relationship.’

In 2013, the Ferrari went to Perfect Reflections in California, with the aim of returning it as close as possible to the condition and style in which it had left the factory 60 years before. Patrick Ottis and Bryan Hoyt disassembled all the mechanical components, to inspect, repair and replace only as the last resort, and they found it very original in every aspect. ‘I still have the 232 handwritten pages of Patrick’s description of the work performed,’ says Hoyt.

The body was taken back to bare metal, repaired, and resprayed in the original dual-colour combination, remnants of which had been found hidden within the car. It was the same story for the interior, which retains the custom parts requested by the Fassio family, and has been retrimmed in materials as close to original as possible. After three years the car was ready, and first time out it won Best in Class and the Ferrari Elegance Cup at Cavallino 2017, plus awards at Mar-A-Lago and at the Swiss Concours in 2018. While it was in Europe, the car received Ferrari Classiche certification too.

It isn’t driven often and, when we take it for a run along the 17 Mile Drive close to Pebble Beach in California, we almost feel guilty. But it takes only a few minutes for confidence to build, and the car, once warmed-up, starts to rev with authority and, suddenly, the surroundings reverberate to its powerful thunder.

You soon get used to working the broad steering wheel to counter the writhing movement of the tyres over the road surface, and the easy power of the 4.1-litre V12 pulls the car along with disdain. With three huge Weber 40 DCF/3 carburettors, you need to explore the further reaches of the throttle with discretion, pushing gently so they work at their best.

All too soon it’s time to return the 342 America to the protective garage where it will wait for the truck home. But, if I ever dared to imagine the perfect car for an event such as the Colorado Grand, now I know what it would be.

Above and right Interior is simple yet attractive; restoration involved matching the paint to fragments found within the structure. Above and top Like many early Ferraris, this car was racebred and capable of competing – but the elegant coachwork was a departure.

‘The easy power of the 4.1-litre V12 pulls the car along with disdain’