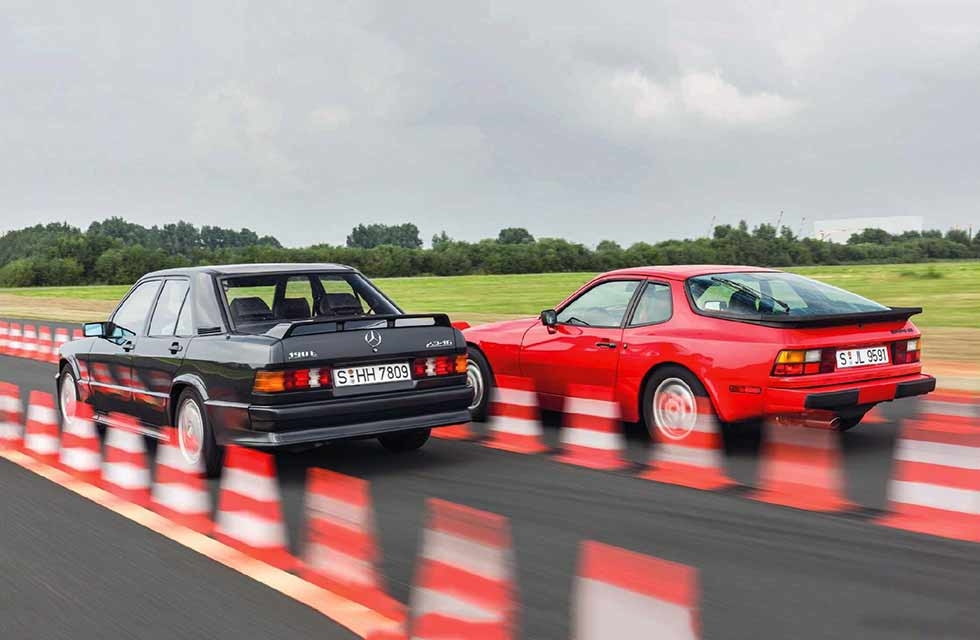 Multi-valve technology. A great engineering advancement from which endless technical-sounding factory designations have been plastered across trunk lids, yet in truth, when everyman marques were shouting about their adoption of four valves per cylinder in the late 1980s, owners of luxury German sports cars were rolling their eyes. After all, they were in charge of models from manufacturers which had adopted the format many years beforehand.

French firm, Peugeot, can lay claim to producing the first car powered by a four-cylinder twin-cam packing sixteen valves. Built in 1912 and designed by Swiss mechanical engineer, Ernest Henry (described as “the most brilliant engine designer ever”), the 7.6-litre Grand Prix racing masterpiece was labelled L76 and ably demonstrated the benefits of multi-valve technology by revving its way into the history books with a clutch of impressive speed records. It wasn’t until the close of the first World War, however, that rival car makers began to experiment with the technology. Mercedes, for example, used a supercharged 5.6-litre straight-eight with dual overhead camshafts and four valves per cylinder in its 1937 W125 race car. Producing close to 650bhp at 5,800rpm, the sensational speed machine topped out at 200mph.

The expensive cost of introducing multivalve technology to engines meant it remained the preserve of works motorsport teams (the only exception being ‘money no object’ road car manufacturers, such as Bentley) before the outbreak of World War II, but the game-changing Cosworth DFV F1 engine of 1967 signalled the beginning of the configuration’s sharp rise in popularity, reduced manufacturing costs and unprecedented accessibility. Consequently, as the 1970s got underway, a variety of mass-produced road cars making use of multiple valves per cylinder were released into the wild, but it wasn’t until Mercedes revealed the W201 190E 2.3-16 and its Cosworth-designed sixteen-valve cylinder head at the Frankfurt Motor Show in 1983 that multi-valve technology became mainstream.

Seeing what was happening across town, Porsche soon muscled in on Mercedes’ multi-valve adventures. Stuttgart-crested race cars, including the legendary 845bhp 935/78 nicknamed ‘Moby Dick’ (in recognition of its whale-like tail), had used four valves per cylinder at the track for many years, but even the excellent 944 Turbo was still utilising an eight-valve head on its water-cooled inlinefour in 1986. Sensing an industry-wide move to sixteen-valve heads for mass production cars, not to mention witnessing how quick the 2.3-16 was in roadgoing trim, Porsche set about revising the 944 range, launching the sixteen-valve, naturally aspirated 944S in 1987.

This was the first time dual overhead camshafts and multi-valve technology had been used on the 944. Free of forced induction, the model’s high-powered 2.5-litre lump was now rated at 190bhp and featured a self-adjusting timing belt tensioner. 16V Ventiller badges appeared on the transaxle’s bodywork. The 2.3-16 now had serious competition in the sports car sector.

The Porsche beats the Benz when it comes to displacement and horsepower (by a measly 0.2-litres and 5bhp), but the 2.3-16 is a lighter car, weighing in at approximately fifty kilograms less than the 944S. In truth, most drivers wouldn’t be able to tell the difference between an engine output of 200bhp and 300bhp, but everyone can feel the performance advantages of less weight; the Mercedes feels much perkier when the pedal hits the metal, throwing the driver into his or her seat with the results of a satisfyingly linear power band and the sound of old-fashioned intake grate.

Many will be surprised by how predictable and agile the motorsport-derived 190E is. Thanks to lowered, stiff suspension (comprising uprated dampers, thick anti-roll bars, hard bushes and a self-levelling rear end), it’s not a tough car to be in charge of, but the Porsche feels more relaxed due to its extraordinary balance. The manufacturer’s goal with the transaxle layout was to achieve as close to 50:50 weight distribution front to back as possible. A water-cooled engine at the nose, a long bonnet, a short front overhang and a long roof were matched to an overhang at the rear designed to accommodate the transmission behind the axle, thereby perfectly balancing weight. The result?

Advanced, sharp and super-responsive handling. It’s a more comfortable car than the 2.3-16 too, but you might expect these qualities from a less aggressive vehicle commanding a higher price tag; on the occasion of its introduction to main dealer showrooms, the 944S was offered at 58,950DM, whereas the 2.3-16 was pitched to punters at 49,850DM. That’s a massive difference, and one which provided Mercedes with the opportunity to deliver practicality and performance in a sporty four-door package at a price point acceptable to the lower middle classes.

An optional four-speed automatic transmission was introduced to the Mercedes in 1986, but this hardly seems the tool of choice for those who enjoy spirited driving (and surely that’s what one buys a Cosworth-tweaked 190E for?!). Then again, how many first-time 2.3-16 drivers have accidentally thrown the five-speed manual gearbox into reverse, expecting to find first? The latter is positioned bottom-left thanks to the introduction of a Getrag five-speed with a dog-leg layout. In theory, this makes the remaining forward ratios easier and quicker to shift between thanks to a simple H-pattern, but in reality, many owners complained about the fact they kept confusing first and reverse gear, even though the same gearbox was widely celebrated when used in BMW’s mighty E30 M3. Go figure!

The sixteen-valve engine powering the special 190E marches briskly and effortlessly through the rev range. At 4,000rpm, it properly wakes up, barking into life before speeding towards the redline. When faced with such blistering pace, the 944S has no chance. At low speed, the coupe feels heavy, perhaps even cumbersome, although it’s fair to say it does pack a punch when floored; the torquey, larger-displacement four-cylinder powerplant makes use of an intake made famous by Porsche’s 944 Turbo Cup cars. It’s a system which comes into its own when high speed is reached, but for truly impressive power from Porsche’s transaxle range, a sixteen-valve 944 aided by a snail-shaped bhp booster should be experienced.

An updated engine with 2.5-litres of displacement replaced the Merc’s 2.3-litre unit in 1988. The older powerplant had suffered a significant drop in poke thanks to the forced introduction of a catalytic converter. Strengthened twin timing chains were included on the newer engine in order to counter complaints about the weakness of single chains on the earlier car’s beating heart, while extra galloping ponies came along for the ride, resulting in an overall power figure of 204bhp stifled to 197bhp with a catalyst in place.

Cosworth continued to provide cylinder heads for the motorsport-bred, sixteen-valve 190E, but Mercedes tried its best to play down the involvement of the UK concern in the development of the updated model. Nevertheless, Coscast logos – indicating a part cast at Cosworth’s foundry in Britain – can be seen in 2.3-16 and 2.5-16 engine bays if you look hard enough.

Regardless of British contribution to the realisation of an iconic German road racer, the ballistic Baby Benz represents a significant milestone in performance saloon car history. The 2.3-16 is fast, it’s fun and it oozes practicality. It’s got loads of luggage space and a desirable technical specification, even by today’s standards. Due to the enthusiasm cars of this age have for attracting tinworm, it’s a rare beast too. Even so, production of the 2.3-16 exceeded the lower volume of the 944S by more than 2,000 units.

The transaxle is, of course, forever in the shadow of its air-cooled sibling, both in terms of respect and price. It seems only a Turbo badge is enough to get the majority of old-school Porschephiles salivating when it comes to appreciating the merits of water-cooled wonders. That’s a shame, because the high-quality design, durable technology, excellent handling and agreeable fuel economy of the 944S contribute to a car more practical and more comfortable than a similarly-aged 911. That’s not to say the front-engined Stuttgart-badged belter is more fun that a 2.3-16, though!

Contrary to what you might think at first glance, the character of the 944S is more in keeping with its continent cruising cousin, the V8-powered 928 grand tourer, than it is that of a snappy sports machine. It’s civilised, more mature. In contrast, the Mercedes is an absolute riot of fast-road fun. Take our advice and buy one before prices rise beyond reach. You won’t regret it!

Above The 944’s impact bumpers are a familiar sight in North America, where they were introduced to satisfy strict road safety legislation. Left Torquey sixteen-valve inline-four boasts 2.5-litres of displacement and would go on to become a three-litre unit for the 944 S2, crowning the engine as being the largest four-cylinder production powerplant of its time. Above The 944’s evolution as a purely Porsche development of the narrow-bodied 924 (a model with joint VW-Porsche parentage) is clear to see. Left Oval-shaped dashboard binnacle replaced the ‘square dash’ of earlier 944s and still feels surprisingly fresh today. Above You’d think the coupe should be more fun than the saloon, but a side-by-side test proves the Mercedes delivers plenty more smiles to the mile Facing page Dog-engagement gearbox features reverse where most people expect first to be positioned.

Cosworth was founded in London in 1958 as a specialist in high-power engines and electronics for motorsport. As employees of Lotus, Cosworth co-founders, Mike Costin and Keith Duckworth, initially worked exclusively with the Norfolk-based sports car and racing concern, producing competition winning powerplants for Colin Chapman’s projects.

Later, a contract with Ford saw the development of the DFV F1 engine and the eventual purchase of Cosworth by Ford following the launch of successful road, race and rally cars in the form of RS-badged Sierras and Escorts.

The 944 was the most successful Porsche product prior to the launch of the Boxster.

The transaxle’s muscular body and powerful drivetrain was an evolution of the 924 GTP, a Le Mans machine which debuted at Sarthe in 1981. Based on the 924 Carrera GT, the new car introduced a purely Porsche 2.5-litre engine and finished seventh overall before being unveiled as the 944 road car in 1982. Newly designed brakes and suspension, interior upgrades and a wider track heralded the beginning of a successful nine-year production run before the arrival of the 968.

PORSCHE’S GOAL WITH THE TRANSAXLE LAYOUT WAS TO ACHIEVE AS CLOSE TO 50:50 WEIGHT DISTRIBUTION AS POSSIBLE