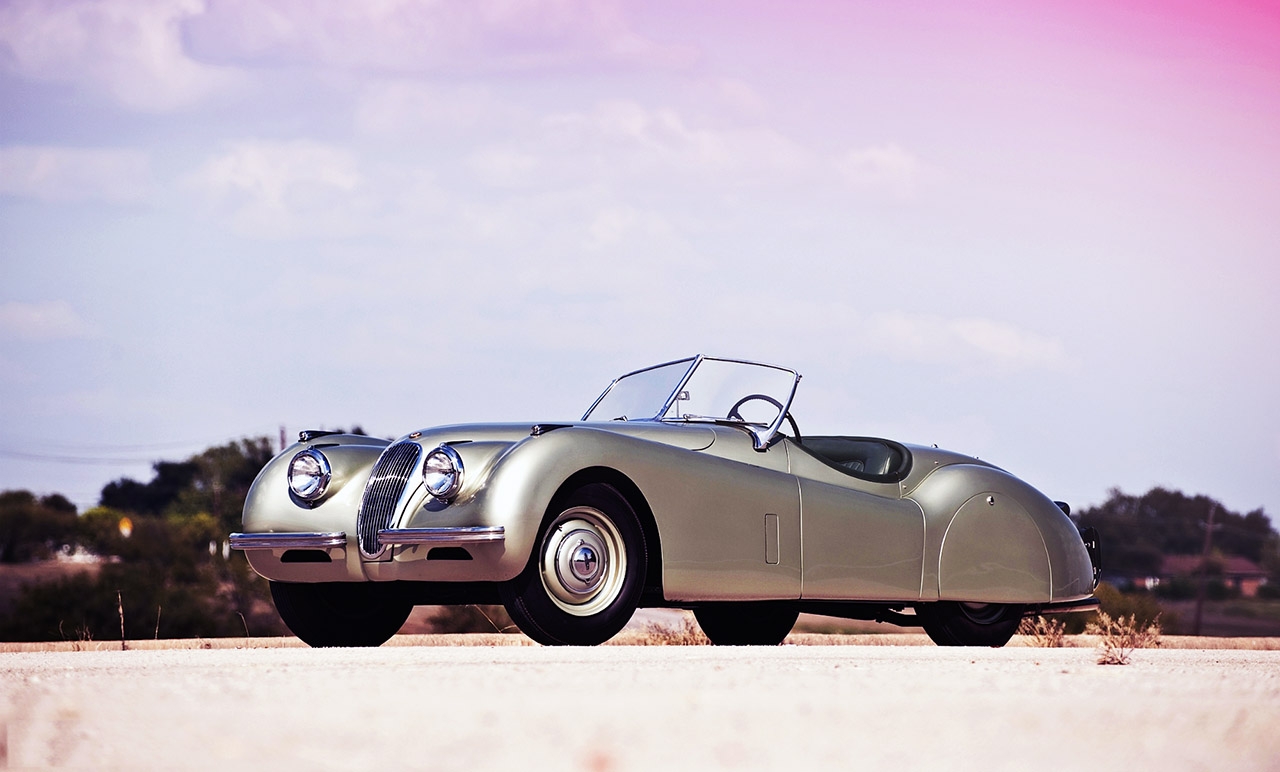 Jaguar XK120 buying guide. This was the first in a long line of post-war greats. And what a sublime classic it makes. As important Jaguar models go, the XK120 is a biggie. The marque’s first sports offering after WWII was the debut for the fabulous XK engine that would go on to power so many Jags through to the 1990s. That, naturally, makes it historically significant. But more than that, it’s a stunning-looking creation, arguably more achingly beautiful than the E-type that everybody raves about. It was originally developed as motor show special, but favourable reaction at the 1948 London event convinced Jaguar to put it into mainstream production.

Subsequent developments saw it switch from wood and aluminium to steel construction after the first 242 examples, and appear as a drophead coupé and fixed-head coupé alongside the original open two-seater (OTS) roadster. However, for all its performance (120mph, thus giving it its name) and style, it was basic and, in 1954, was superseded by the XK140. But the XK120 had done its job and set the template for so many classics that followed it.

WHY YOU WANT ONE

The XK120 is less obvious than an E-type, but will give you just as much adulation on the roads and at events (especially club ones). The outright performance and handling may be a little lacking, but aesthetically, an XK120 will out-glam almost all other classics.

For a car born in the 1940s, it is almost ridiculously easy to still get parts, although they are pricey. If you’ve got enough money to buy one of these, then you should be affluent enough to look after it too. Buy the best you can find and avoid a hastily blown-over mess. One of those will cause a lot more heartache than the excitement and exhilaration that these cars should offer when they’re at their best.

It’s unlikely you’ll come across one of the alloy-bodied cars. Steel versions arrived in May 1950, although the bonnet, doors and bootlid were still aluminium. Make sure that the panels fit well and the body sides ‘flow’ smoothly from front to rear. Look for rust around the front valance, headlamps, sidelamps, trailing edge of the wing and where the A-post meets the scuttle. Sills and the beading between the rear wings and back shroud should also be scrutinised. Check the bonnet, which is easily creased. Heavy doors can drop on their hinges, thanks to rot in the hinge boxes. The chassis is tough, but rust can attack around the anti-roll bar mountings and the rear chassis rails.

Being an XK, parts are plentiful but specialist work will be expensive. Expect a little blue oil smoke; getting through a pint of oil every 200 miles is usual. However, there shouldn’t be an excessive amount from the exhaust. Oil leaks are also likely, but if from the rear crank seal, it’s an engine-out job. Listen for rattling timing chains and rumbling or screeching from the water pump, meaning they will have to be changed. On a test drive, look for hot oil pressure around 40psi at 3000rpm or 20psi at idle, and make sure the engine isn’t overheating.

The four-speed manual Moss gearbox is resilient but somewhat ponderous to use. Worn ‘boxes will start to lose synchromesh on their top three gears. Expect some gear whine – especially on first – but excessive noise points to a costly rebuild. Rear axles can leak on little-used cars.

The front suspension Metalastik bushes wear out, so give them a visual check for any perishing. Finding a car where polyurethane items have already been fitted is a bonus. Expect some play in the steering box as a matter of course. Brakes are drums all around. Pistons can seize on little-used cars, so check the car pulls up straight and true.

Coupés are better-trimmed than open cars, which means you’ll have wood to worry about as well as leather if a retrim is required. Hoods can be a nightmare to replace. Electrics are simple, any trouble usually being corroded or loose connections. Two six-volt batteries was the factory standard but many owners will have upgraded to a single 12-volt item and wisely fitted an alternator too.

The all-new (for 1948) Jaguar sports car looked sensational from every angle. It still does. Twin overhead camshaft XK engine delivers a top speed of 120mph. Cockpit can feel a bit cramped, but it’s beautifully laid out.

Prices from www.sngbarratt.com and include VAT