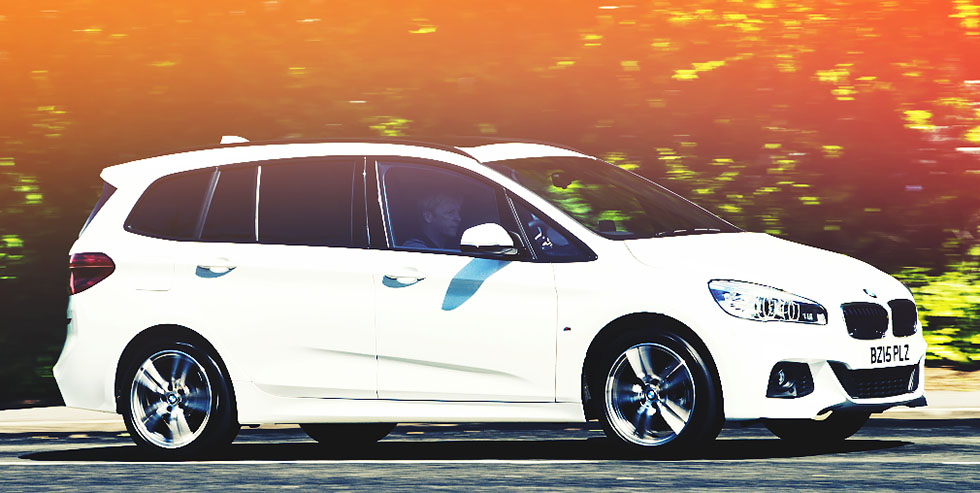 The new seven-seat MPV deserves a second look. The 2 Series Gran Tourer is BMW’s first foray into the seven-seat MPV market, but does it tick all the right boxes? Words: Bob Harper /// Photography: BMW

Generally speaking I think I’m pretty good at approaching new cars with an open mind and while it’s not possible to completely eradicate one’s preconceptions, I do try my level best not to be influenced by what I’ve read elsewhere or the mutterings of my peers or online chitter-chatter. With the latest additions to the 2 Series range – the Active Tourer and the Gran Tourer that’s the subject of this feature – it’s pretty hard not to be dragged in to the ‘it’s a front-wheel drive’ or ‘BMW’s built a Zafira’ school of thought. For diehard BMW fans these machines do seem to be a little bit of a bridge too far.

While I can see where they’re coming from, and while there’s no doubting the fact that a seven-seat MPV is just about the polar opposite of the classic Ultimate Driving Machine advertising slogan, there are plenty of reasons why BMW felt the need to be represented in this sector of the market. The prime reason is very simple; when customers who had left the marque to defect to another brand were asked why they had left the BMW fold the answer was very straightforward – BMW did not make the type of vehicle they were looking for. And customer retention is vitally important, as are conquest sales – bringing new customers to the brand – and with the best part of a year’s worth of Active Tourer sales under its belt BMW is delighted that nearly three-quarters of the 2 Series AT sales have been to those who have never owned a BMW before. BMW is obviously hoping that this will continue with the larger Gran Tourer, too. And there’s no doubting that the car has plenty of showroom appeal. I’m not going to dwell too much on the car’s looks – unadventurous is probably the kindest way of describing it – to my eyes it’s just nowhere near as stylish as, say, the new Ford S-Max, with the Blue Oval demonstrating that seven-seat practicality doesn’t automatically lead to dumpy styling. Once you’ve got past the car’s looks you should be able to see that what the Gran Tourer offers is a hugely practical package. In the UK the third row of seats is standard (they’re optional in other parts of the world), and while they’re not huge, kids should be happy back there on longer journeys and adults will manage for shorter trips so long as they’re not too long of leg. The centre row of seats move forward and aft to either increase leg room or luggage space and when they’re in the forward position there’s about as much legroom as in a 5 Series – when they’re pushed back as far as they’ll go it’s a 7 Series-rivalling space. Pretty impressive given the car’s overall length is actually less than that of a 3 Series Touring. 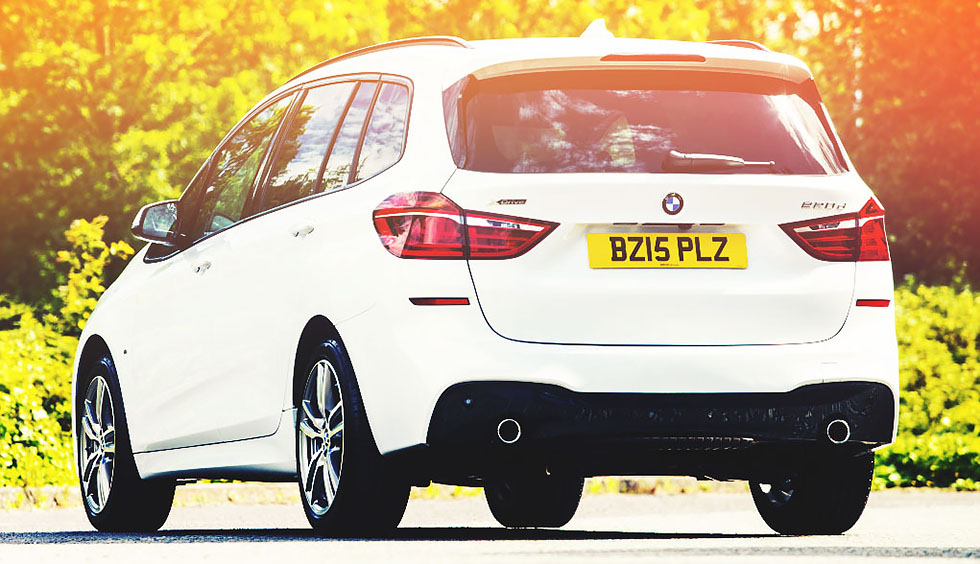 Boot space is excellent – 560 litres with the third row of seats stowed – and up to 1820 litres when the middle row is folded flat. The 560-litre configuration is a very practical shape, too, and even the most awkward of child buggy systems should be easily accommodated. Inside the cabin there’s plenty of useful storage space – all the door pockets will accommodate 1.5-litre drinks bottles and there are additional storage bins under the front seats and under the middle row. As you’d expect, the splitfolding rear seats fold 40:20:40 and drop down from the boot at the touch of a button. The tailgate is electrically operated which is a boon if you’re approaching the car with your hands full, and those who have had quintuplets will be pleased to hear that five universal car seats can be accommodated in the middle and rear rows of seats. All-in-all it’s hard to imagine how BMW could have made the Gran Tourer a more practical space for a family.

This practical aspect of the car is backed up by a real quality feel to the interior, even on the most basic version we sampled the switchgear and controls all operated with typical BMW precision. Just about the only thing we weren’t keen on was the relocation of the Drive Performance Control to a switch mounted vertically just below the heater controls in front of the gear lever rather than next to the gear lever… and while we’re on the subject of the controls, as the heater and air-con controls are sited pretty low down on the dash you do really have to take your eyes off the road to change the settings. The plus side of their location is that there’s a useful cubby in the dash for mobile phones and the like, but I can’t help but feel that their positions should have been reversed, after all you’re not actually meant to touch your mobile while driving so having it falling easy to hand is an unwanted temptation. 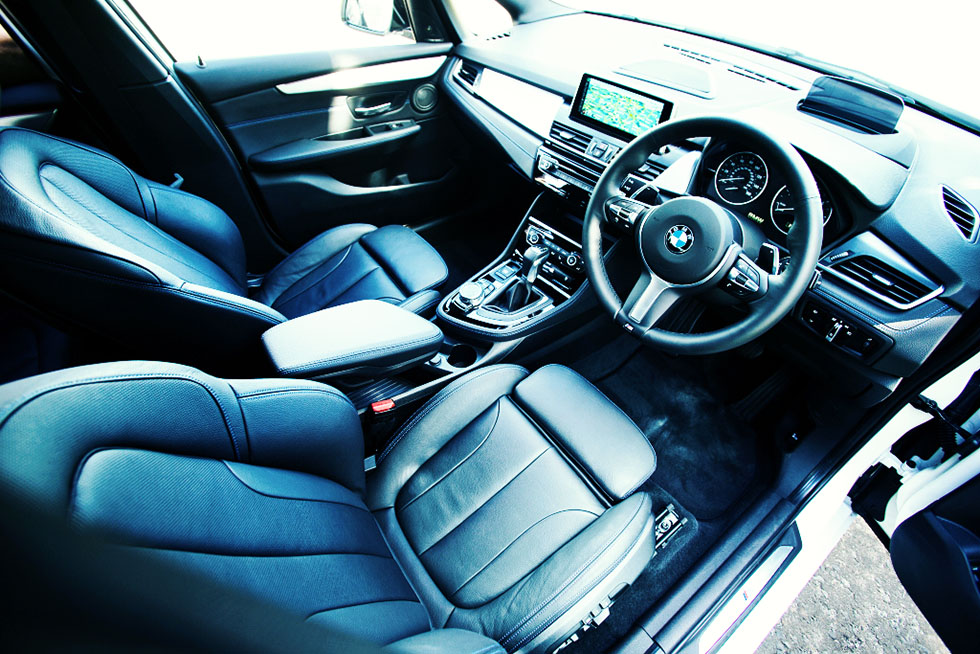 While you might not expect the 2 Series Gran Tourer to be a prime example of the Ultimate Driving Machine it does actually drive rather well. We sampled four different models – 218i, 218d, 220i and 220d xDrive over a variety of roads – and while unsurprisingly some were faster than others all were actually entertaining to drive which did come as a little bit of a surprise! The 218i starts at £24,710 and is powered by BMW’s new B38 three-cylinder petrol unit that develops 136hp and 162lb ft of torque and while the car initially felt quite sprightly when unladen I was interested to see if the diminutive unit would actually have enough mumbo to make progress when fully laden. Inserting six big blokes into the sixfree seats demonstrated that while initial pull away may have been slightly affected the engine did still seem remarkably unbothered by the extra weight it was now being asked to shift – not the fastest machine on the roads, but more than capable of keeping up with traffic conditions. Official stats suggest a 0-62mph time of 9.8 seconds which feels about right, but I wasn’t able to get close to the claimed economy of 53.3mpg, even when taking it pretty easy, and my commute in the car saw a best figure of high 30s. A motorway cruise taking it very easy will see that nudge up into the 40s, but if you’re after economy you’ll definitely need to look at one of the diesel models.

I haven’t tried the three-cylinder 216d yet, but the 218d that features the new four-cylinder B47 engine in a 150hp/243lb ft state of tune felt considerably peppier than the 218i thanks to having an additional 80lb ft of torque. There’s only 0.3 of a second between them as far as their official 0-62mph stats would suggest, but on the road there’s a real gulf in performance, especially in the mid-range. Where overtaking would be a slightly fraught affair in the 218i (especially as the three-cylinder petrol does get a little coarse towards the redline) the 218d will waft past slower moving traffic on its mid-range torque. Official economy quotes a stat of 64.2mpg and while I didn’t get as far as that, mixed driving saw high 40s and a gentler approach nudged it into the 50s. 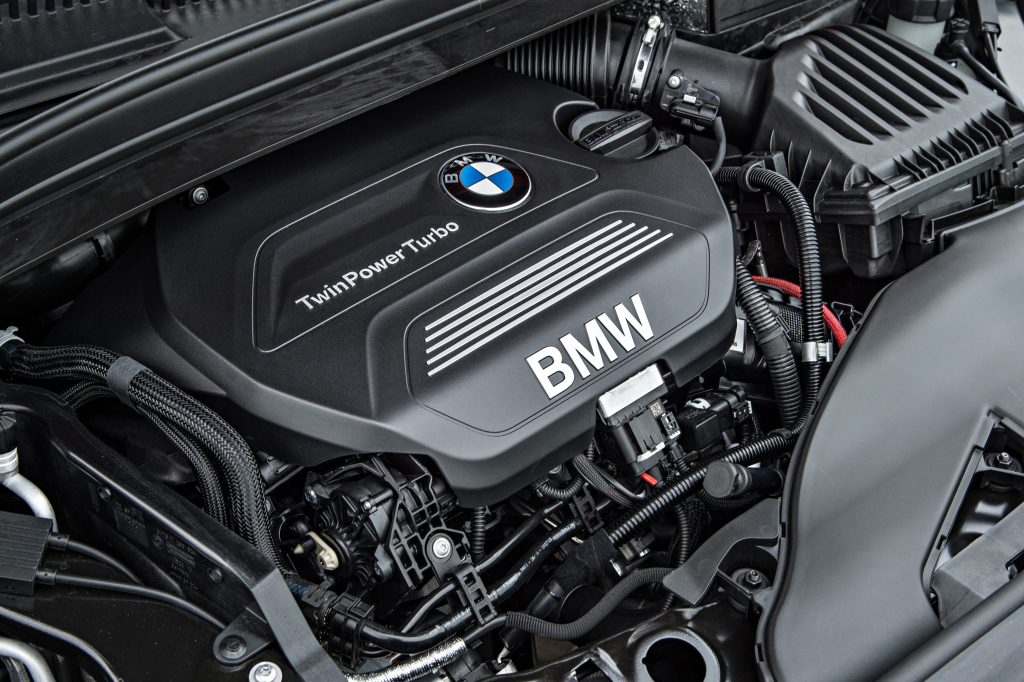 The look of the transverse engine layout takes a little getting used to when you open the bonnet; interior very practical and well finished.

Unsurprisingly the 220d xDrive fitted with the excellent eight-speed auto was the pick of the models I drove on the road, proving itself to be quiet, refined and surprisingly punchy. It wasn’t as economical as the 218d but the additional performance was most welcome and when hooked up to the eight-speed the new engine is as refined as the ‘box is silky smooth. The chassis is hugely tenacious too, the fourwheel drive endowing the car with enormous reserves of grip and cornering poise and you really do feel like you’d have to be doing something really out of the ordinary to unstick it or unsettle its surefooted nature. Even in M Sport trim and sporting 18-inch alloys the ride seemed very composed, and there didn’t seem to be a huge amount of difference between this car and the 17-inch wheel and tyre combos we tried on the other cars, with the only caveat being that all the cars we drove were equipped with the optional Electronic Damper Control, although at £390 it’s not an expensive option to tick on a Gran Tourer.

There are four trim levels on offer; the standard SE, Sport, Luxury and M Sport, and they all offer a slightly different ambiance. As standard you get BMW Navigation, DAB, Bluetooth (including audio streaming), two-zone automatic air conditioning, collision warning, rear PDC, a multi-function steering wheel and the aforementioned seven seats and auto tailgate. Sport, Luxury and M Sport bring similar options to the 2 Series Gran Tourer as they do in the rest of the BMW range and with 13 different paint finishes and five engines to choose from there surely must be a model to suit everyone’s taste and pocket.

After a week with the 218i I came away very impressed with the car. It’s not a machine I could fall in love with – it just doesn’t have the looks for that as far as I’m concerned – but it’s a machine that you end up respecting for its huge range of abilities. It’s entertaining to drive even if it is driven by the ‘wrong’ wheels – give one a try and I’d expect you’ll be similarly pleasantly surprised so long as you leave your preconceptions at home.