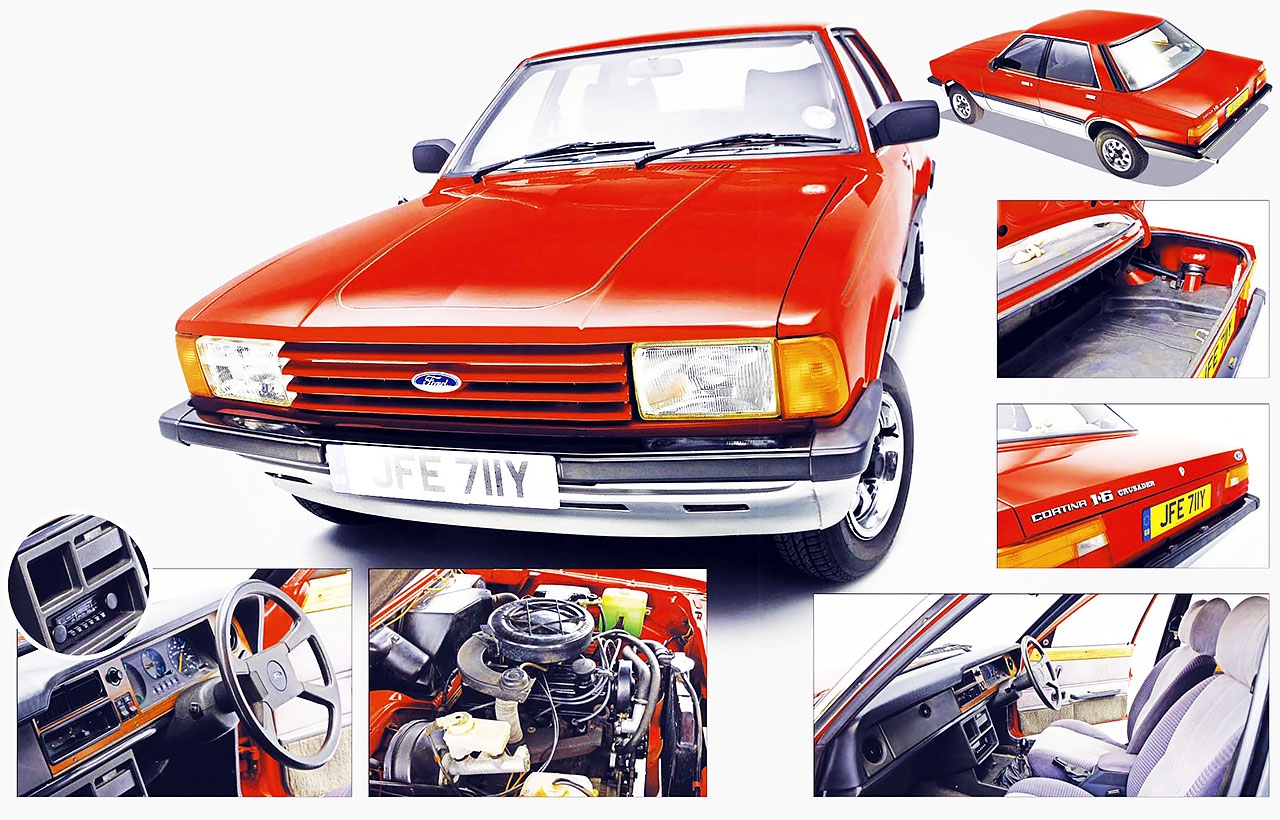 As the 1970s wore on, thoughts at Ford were turning to how it could replace the much-loved MkIII Cortina. The MkIII’s ‘coke bottle’ styling had found plenty of admirers, but its replacement took a boxier, more conventional approach and that was to do sales no harm at all. In fact, the company shifted around 600,000 examples of the MkIV alone and along with the facelifted ‘80’ or MkV that arrived in 1979 the Cortina still makes plenty of sense today.

There’s a pleasing honesty and simplicity to the way it goes about its business, providing owners with a decently spacious and comfortable cabin that’s perfect for the urban grind or longer motorway trips. The seats were certainly comfier and more supportive in the later car but either model would make a good case for itself as a mile-eating cruiser, and if you needed extra space there was always the estate. Only the slightly shallow roof line limited its ultimate ability to shift goods and chattels, but it was a useful device all the same.

Stick to the lower trim levels and you might find things a bit austere inside, but GL and Ghia variants improved the cabin environment, adding niceties such as velour upholstery and fake or veneered wood.

To drive, the Cortina was more than capable although the 1.3-litre lump was somewhat underpowered for the job – opting for the 1.6 or 2.0-litre units was a better bet, and there was always the temptation of the smooth and pacey V6. Either way the engines were attached to slick-shifting manual or three-speed automatic gearboxes, and while the latter brought a penalty when it came to economy (my own 2.0-litre automatic estate struggled to exceed 20mpg most days) it made for a smoother and more relaxed choice around town. Ride and handling were Cortina strong points too – the more stiffly suspended S-Pack models feeling even better controlled – and even without power assistance, the rack and pinion steering was accurate and well weighted.

Anyone wanting a roomy, comfortable saloon or estate should be looking closely at the MkIV/V Cortina, the classic that was replaced by the Sierra. Yes, rust can be an issue, and no, you’ll struggle to find a good one cheap, but it’s as usable today as it was when launched. And with a DIY-friendly nature and great club support it’s a Ford of which we heartily approve.

No-one will be the least bit surprised to hear that corrosion has done for many of these cars, so thorough checking is needed. Examine all of the exterior panels, paying attention to the usual suspects such as wings, wheelarches, door bottoms, and inner/outer sills. Areas such as the front and rear valances and A-pillars – watch for dropping doors – also need investigation, as do the front and rear screen surrounds, and the bottom of the tailgate on estate cars. Watch for bubbling beneath the vinyl roof too, if fitted. Basically, you need to check absolutely everywhere.

Similar investigation is needed underneath as they are prone to suffering rot in the chassis outriggers, floorpan, and spare wheel well. Corrosion can also attack the front bulkhead and the battery tray, and the former is a tricky fix. While you’re under the bonnet take a look at the top suspension mountings for signs of previous repairs and the condition of the crossmember beneath the front end. MkVs got wax injection and PVC underseal but it didn’t help much. Repair sections and panels are available, but could take some tracking down.

The Cortina is a brilliant DIY proposition, helped by excellent access to the engine and ancillaries. General decrepitude and neglect are likely to be the main problems, so watch for evidence of oil and coolant leaks and exhaust smoke that signifies terminally worn piston rings, cylinder bores, or valve stem oil seals. Lack of regular oil changes – every 5000 miles or so are best – will lead to premature camshaft wear on 1.6/2.0 Pinto engines, while the 1.3 Kent unit can suffer here too along with a worn timing chain. V6 camshafts were gear-driven but Pinto cambelts are easy to change so there’s no excuse for it not being done.

The ‘Cologne’ V6 is a tough unit, but it’s worth checking for signs of head gasket woes. It can also be a bit trickier to work on – changing the water pump can take a few hours – so that’s worth bearing in mind. On other matters, the Ford VV (Variable Venturi) carburettor fitted to some engines could be troublesome, and often replaced by the Weber that was standard across most of the range. And upgrading the ignition to an electronic set up is a useful and popular upgrade.

Manual gearboxes should have a sweet shift, so obstructiveness or excessive noise points to one in need of re-building. Worn synchromesh between second and third gears isn’t uncommon though, and check for oil leaks. The Ford C3 automatic was tough, and unless abused should be trouble-free – just check for jerky shifts or a tendency for the engine revs to flare on upchanges. A slightly noisy back axle shouldn’t be a problem.

Steering racks can wear and it’s worth checking for leaking power steering hydraulics (it was standard on the V6). Watch for wear in front suspension arm joints and track rod ends too. At the back, it’s tired void bushes that cause the most problems and they can wear surprisingly quickly. A judder when pulling away or sideways body movement over bumps is the giveaway, and polyurethane replacements are popular, although this does firm up the ride a bit. The rare S-Pack cars got firmer suspension with gas-filled dampers. The braking system is simple and trouble-free with regular maintenance. However, the alloys wheels fitted to some V6 and Ghia models are prone to corrosion so budget for a re-furb.

Finding interior parts can be tricky, so check the condition carefully. MkIV seat bases can collapse with age – MkV items were better – and watch for damage to the dashboard and door cards. Sunroof-equipped cars could have suffered from water ingress too, so check for a stained headlining and musty carpets. The electrics were straightforward, with most problems caused by corrosion of the fusebox, so ensure that everything works and be alert for signs of bodged wiring repairs or modifications.

‘I’ve owned quite a few examples over the years, but my current car is a 1978 MkIV 2.3S. It’s a rare model with only a couple known to be left, and having searched for around three years I finally find mine in 2002. I’d heard about it through the club and although it had been sold, I managed to track it down again through a Cortina forum and went to view it immediately. The condition wasn’t great as it was quite rusty and needed a new clutch and carburettor, but having done some work including fitting new wings and rear wheelarches, I used it for around eight years. The body was still a bit scruffy though, so in 2013 I treated it to a nut and bolt re-build – the work undertaken by a friend – and also changed the colour from Roman Bronze to yellow. It’s been pretty reliable since although it has suffered from a gearbox problem – now fixed – and I needed to replace the water pump which was quite a long job. Having covered only 83,000 miles, it’s a car I use just for shows nowadays and I certainly won’t be parting with it.’

Despite so many being built, numbers are dwindling and that’s pushed values upwards in the last five years or so. Expect to pay more for a V6 model, and even more again for the rare twodoor and ‘S’ specification cars, although there appears to be little difference in price between saloons and estates. MkIV and 80/MkV values differ to an extent, although it appears to depend on buyer preference rather than age, as much as anything. Be wary of over-priced last-of-the-line models, though.

The layout couldn’t be more straightforward, but check for cracks and damaged veneer. Reliable and easy to work on, there’s nothing to fear beneath the bonnet of a Cortina. The boot is cavernous, as required for business and family use. Production ended with the ‘Crusader’ model. Ford shifted 30,000 of ‘em. Few complaints about the space or comfort in here, although you’ll need to watch for decaying and missing trim items.