style=”flat” size=”4″]The modern world and the technology which underpins it means that, for many of us with an all encompassing love for all things with four wheels hailing from the US of A, it’s easier than ever to scratch our Americana-itch. From films to Facebook groups, forums to Youtube shows, the automotive world really does echo to the sound of fully-fat American veeeights.

The Teutuls, Boyd Coddington, Chip Foose, Richard Rawlings and even Ryan Friedlinghaus, these are all household names to those petrolheads with a passion for yankee metal, and many have opted to take their passion a few stages further, by building replicas of their hero’s automotive creations.

The ‘1972 Dodge Challenger you see here is a good example of this in action. Built by the guys at Krazy Kutters Speed Shop, the Challenger was created as a homage to a similar car built by Chip Foose and his crew, and the original car wound up being the star of the 2006 SEMA show and got a 6.4l Hemi along the way. It was a stunner and has gone down as one of the stars of Overhaulin,’ so perhaps it shouldn’t be all that surprising that it’s since inspired a similar build on this side of the pond.

It would be a massive understatement to say that the chaps at Krazy Kutters know a lot about American cars. They’ve built and still own all kinds of classics from the US, including a 1930s hot rod, a Chevy Impala low-rider, a track racer inspired Trans Am, and many muscle cars, so it’s fair to say these central Europeans are well and truly living the American Dream.

The owners of the workshop are Balázs and Ádám, and they took to the challenge with gusto, starting by making contact with their car dealer partner in Miami Beach. They were able to turn up the ‘72 Dodge (the same year as the one in the TV show) you see here, a lime green car with a 440ci big block and a handy 360bhp.

A month spent bobbing across the Atlantic later, and the Challenger finally arrived in Europe, much to the excitement of the Krazy Kutters crew. The good news? The V8 fired into life easily enough. The bad news? It boiled over after a few hundred meters, cue the Dodge being pushed to the back of the workshop while the team plotted their next move. The restoration process was started, as is so often the case, with a comprehensive disassembly of the Challenger and this revealed that, despite its 42 years spent in sunny climes, it was far from road worthy. This led to a session in the shot blaster and meant that the team had to start hunting for old Dodge parts and in Europe – not an easy task by any stretch of the imagination. Luckily they were able to salvage all the original panels, though doing so entailed some fairly invasive bodywork – the team even had to cut out pieces from the roof and the boot, then replace them with completely new ones. 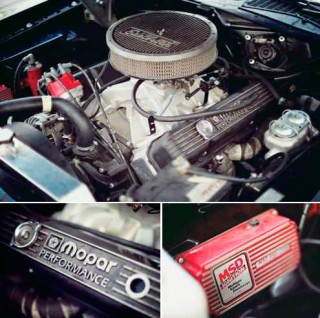 There are a number of direct references on this car to the original, Overhaulin’ Challenger built by Chip Foose, the most obvious being the modified and re-mounted front and rear bumpers, both of which now sit flush with the bodywork. The Krazy Kutters team also added their own touches to the project, the LED rear lights being but one example. These now double as brake lights, meaning that they also had to carry out some supporting bodywork tweaks, even going as far as re-running the exhausts.

After all the needed bodywork was done, the next step was to take the car to the paint shop, and this was the only part of the project not undertaken by the garage itself. Balázs and Ádám were at pains to make the paintwork a perfect homage to the original Challenger, and in order to well and truly nail it, they took the rather drastic step of flying over to the states to visit Foose’s garage. Classic American hospitality was very much on tap, and the pair ended up flying back with the exact colour codes, plus a set of Foose wheels to really set the project off.

Having the exact codes made the painting process a far simpler affair, and it wasn’t that long before the freshly sprayed Challenger could be wheeled back out of the spray booth. The only obvious difference from the original? The lack of a big silver stripe running across the back of the roof.

As you might expect, the Krazy Kutters went to town on the car’s chassis, though they opted to forgo the air ride route followed by Chip Foose. Instead they ordered brand new tube swing arms, lowered torsion bars and a new rear axle, modifications that served to tighten the handling and also lower the whole car. The icing on the cake as far as the chassis was concerned? A brake upgrade, with Wilwood Vintage stoppers all round – six pots at the front, four pots at the rear. 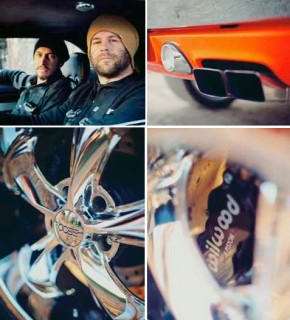 This is all well and good, but as we’re sure you’ll agree, a muscle car lives and dies by its engine, in the case of this Dodge, a Magnum 440 big block. It was good, but not great, and the Kustom boys soon added a suitably fettled Edelbrock top end, complete with chunky cams and enlarged valves. Turbos and superchargers? They’re notable by their absence.

That Edelbrock top end is worth looking at in greater detail. It sports a new (i.e. larger) carb, cylinder heads, the aforementioned valves, ported and polished inlet manifold, MSD ignition to help fi re the whole setup into life on cold, dark European mornings, and a whole host of other trick go-faster bits. The upshot of all this fettling is a very respectable 550 horsepower, not bad for a car that’s since celebrated its 44th birthday!

To put this huge power to the ground they needed a proper gearbox for the job, something made a little easier thanks to the efforts of the car’s previous owner. He or she had definitely spent some time and money here! All that remained was for Balázs and Ádám to source a few parts, fit a B&M shifter, then bolt the whole thing back together – job job’d.

The interior was in a pretty bad way having borne the brunt of four-decades of scorching hot summers, so the team opted to give it a sympathetic re-jig, though they did opt to install some bucket seats at the front, plus a pair of four-point harnesses.

It’s at this point that the car’s owner made a monumentally stupid decision. Instead of pressing ahead with the build, he got cold feet, eventually opting to spend his hard earned on, wait for it, an S-Class Mercedes-Benz. We’ve nothing against Merc metal you understand, but it would have to be one hell of an S-Class to beat this particular Challenger! Still, his loss was Ádám and Baláz’s gain, as they managed to secure the almost complete Dodge for a very reasonable sum indeed, and then celebrated their latest purchase by doubling down on the build and racing for the finish. The final touches are often among the most satisfying parts of any project, and so it proved here, Ádám and Balázs taking great pride in applying some suitably retro looking ‘Magnum 440’ graphics to the flanks of the car, a fitting tribute to the ‘Hemi 359’ stickers worn by the Foose Dodge. 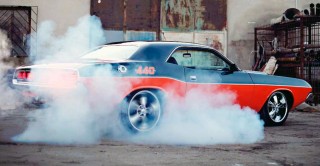 Finally, the wheels. They are also different than on the original, but as said before, they are original chromed Foose ones; 8.5×18- inch at the front, 10×20-inch at the rear – just about big enough to fill the arches! The only problem with the huge wheels is that turning now is an issue thanks to the Challenger’s lack of PAS, and they couldn’t fi t a Charger system as there simply wasn’t enough space – the exhaust manifolds took it all up! The result? A choice between big bore exhausts and a suitably bonkers engine note, or an easy turning wheel. Ádám and Balázs thought about it for approximately 30 seconds, then plumped for the first option. But for now it won’t be their problem. The guys decided to take the Challenger back to its homeland, so this January it returned to Miami to take part in an auction. Selling a car like this in Europe is really hard, but in the US, everyone wants a TV-star car, particularly if it comes with a story as good as this one. This Challenger didn’t feature in a show, but no doubt it’s as well made and as well loved as the original. Americana via way of Hungary? It shouldn’t work, but by God, it really does! 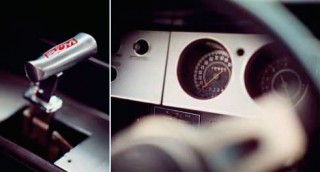 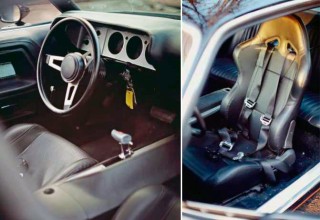 Chip Foose himself would be proud of this awesome homage! Tyres, the natural enemy of the 440ci Big Block V8!