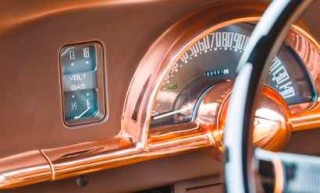 style=”flat” size=”4″]The concept of the Cyclops is one of the more tricky-tograsp ideas from Greek mythology. Sure, okay, there were a lot of mad creatures running about the place and there’s no reason why we shouldn’t accept a race of primordial giants with a single eye in the centre of their foreheads, it’s no more or less bonkers than, say, the troops of a besieged city not immediately seeing through the ‘generosity’ of being gifted a colossal wooden horse and just gamely wheeling it in through the gates. No, the real problem with the Cyclops is that paintings of them show humanoid faces which have the bone structure to accommodate two eyes, and yet we’re to believe they’ve inexplicably evolved backwards to develop a vision scope that has no depth perception. I mean, come on. 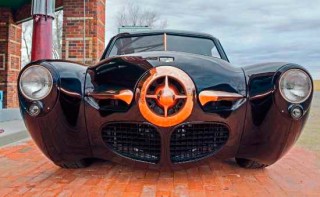 Nevertheless, it’s this peculiar aesthetic that Studebaker called upon when tarting up their Champion model back in 1950, and you have to agree that it works. That central eye (which is a grille, rather than a headlight) certainly gives it character. The 1950 Champion is an unusual creation anyway, with or without the Cyclops eye; the post-war third-gen model was available as a four-door saloon, station wagon or convertible, but Studebaker also saw fi t to hand the crayons over to Raymond Loewy Associates so that celebrated designer Virgil Exner could have a go at reimagining the car as a rakish two-door coupé. What emerged, the Champion Starlight Coupé, wowed the public with a widescreen wraparound rear window, that iconic Cyclops styling, and a bootlid so comically long that contemporary wags remarked that they couldn’t tell which way it was supposed to be going. But this unique styling made the Champion Starlight look super-futuristic – no-one ever shook up the establishment by playing it safe.

It’s gratifying to know that, sixty-six years down the line, this car is still able to shake up the establishment with the same vigour and effervescence, as it’s precisely this model that Kicker Audio chose to showcase their latest line of speakers. They’re known for putting together some pretty phenomenal show cars, but this slinky retro poppet really takes the cake (and, since it’s a nice thick slice of Americana, all the other cakes too, plus a bunch of steaks, with a strawberry on top). 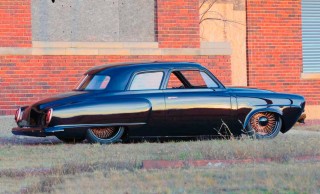 The Kicker Vehicle Design and Fabrication team is a humming colossus that churns out more bespoke audio installs than you’ve had hot dinners (possibly, depending on your own proclivities for salad or otherwise), but the ‘Eagle Eye’, as this Studebaker became known, really knocked things up a notch for all concerned. The team in charge of strategising these stereo showcases, consisting of fellas by the names of David Adams, Randy Botts, Josh Fletcher, Tim Smith and Kip Litsey, sought the permission of management to build a demo vehicle from the ground up and, once the Kicker string-pullers saw the Studebaker sketches, they couldn’t throw the cash at it fast enough.

What resulted, as you can see, is a smooth, slippery hot rod; mild custom in terms of the bodywork, but very much a contemporary build. Rather than being ostentatiously chopped, channeled or sectioned, the ’50 Champion’s body has simply been perfected to a flawless, arrow-straight finish, and slathered in Black Cherry paint. The car’s real hook comes in the form of that peculiar copper-plated trim, which is something that – on paper at least – should be a bit tacky. But it isn’t. It looks superb, it complements the Black Cherry perfectly, and it gives this build a clear identity: when people talk about ‘the copper Studebaker’, everyone knows which car they’re referring to. 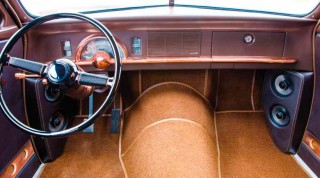 The copper accents carry over to the interior too, and this is one area in which the focus of the build has perhaps skewed slightly toward the more surreal nature of show-use-only motors; when this project debuted at SEMA, the crowds clasped their hands together and gasped at the full-custom interior, stitched in gorgeous and sumptuously soft leather, but were perhaps a little befuddled by the copper wire interwoven in the seat bases. That’d annoyingly poke you in the bum, no? But, aha, it’s all about shaking up the establishment again – the copper not only ties in to the exterior finish, but also offers something truly noteworthy; a conversation piece. As does the central armrest actually, as this seemingly innocuous item opens itself to reveal two key elements central to the car’s character: firstly, the air-ride controls – as the Champion has a bespoke Air Lift system to get those vast old-skool flanks sitting cartoonishly low over its 20” Dayton wires – and secondly, the push-button transmission controls. This transmission, you see, is a heavy-duty Hydramatic, and it’s hanging off the back of something quite special.

Lift the bonnet, and you’ll see what that special thing is: it’s an LS3. And if you’re not au fait with Chevrolet engine codes, that’s the 6.2-litre V8 that you’d normally find causing trouble in modern Corvettes and Camaros. We’ll call it a nice round 430bhp. 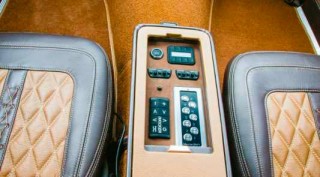 Now, let’s return to Kicker, as it was they who were ploughing untold funds into the thing in order to show off their latest audio line. The PX-Series was apparently designed specifically for hot rod and custom car applications, which involved developing high-performing equipment that doesn’t encroach too much upon passenger and cargo space, with amps that can neatly sneak under seats and so on, as well as taking into account various egghead calculations and formulae concerning resonance as it relates to rattly old bodywork and… well, they’re the experts, we’ll probably just have to take their word for it. Or better yet, just check out the fresh install that the ‘Eagle Eye’ Studebaker’s rocking: it’s got a clever ‘Media Device Controller’ designed for use with Apple products (something that Studebaker hadn’t thought of back in 1950, the fools), six juicy amps, three sets of components, a couple of brainiac shallow-mount subwoofers, and all manner of clever processors. The point of it all is that it’s modular, so hot rod owners could look at it and say ‘Ooh, I like the subs, I could get a couple of those and maybe a set of the components to match,’ or what-have-you.

(And far be it from us to point out that the boot install here does, er, actually encroach on the cargo space a fair bit. Perhaps Kicker employees travel light.) 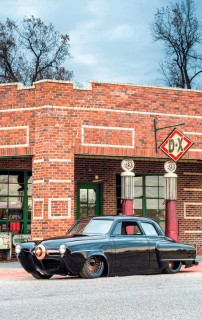 The custom fabrication of this stellar build was down to a veritable who’s-who of aftermarket big-hitters, including Fatman Fabrication, Miller Welding and Kindig-It Design, and it’s testament to that original planning team’s dedication to the craft that the results are so headline-grabbing. All this car fundamentally needed to be was a shiny, Dynamatted vessel to screw a load of speakers into, but instead they’ve gone to great lengths to create one of the finest modified Studebakers the world has ever seen.

It’s often said that when people lose a particular sense, their other senses are heightened. We’ll leave you to fill in your own cheesy line about how this Cyclops has been gifted a vastly improved sense of hearing!

… although there are one or two more buttons to press than with the stock 1950 spec!

It’s a refreshing approach for a custom Studebaker. No roof chops, no sectioning and no channeling, just how the factory intended in fact… just closer to the tarmac.

BEHIND THE SCENES – BUILDING THE EAGLE EYE