Thanks however to the dedication of Carl and Michelle Hanley in returning their Mk2 A40 Farina Countryman Deluxe to the road, there is a new generation coming through – in the shape of daughters Jade, 13 and Paige, 16 – who can say not only: “My dad HAS one of those,” but also, “we helped restore it!” As I find out when I visit the family at their home in Crewe. 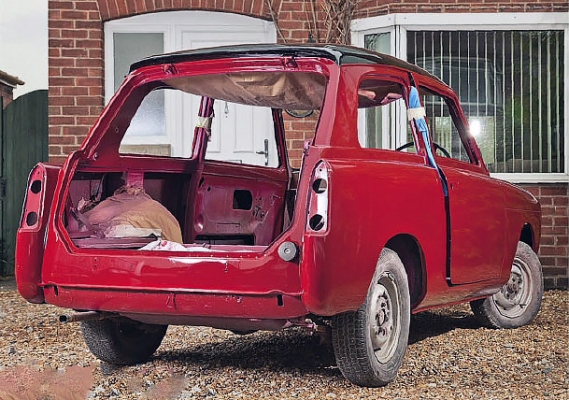 Car will be fitted with black Rostyle wheels once it is finished.

So how did the family end up with an A40 Farina?

“I bought it for Michelle as a Valentines present in 2010,” explains Carl.

Michelle, did you want it, or did Carl really buy it for himself?

“No,” she laughs, “I definitely wanted it! We had a saloon that we were part way through restoring and I’d decided I wanted to do my own, so we bought this, which was up and running.” Carl adds, “Soon after, it became clear that the first car was going to have to be scrapped, so we’re down to just one A40 now.”

So did you start the restoration straight away?

“No. It passed its MoT in 2012,” explains Carl. “But it had an advisory relating to a little bit of rust in the drivers’ footwell and also the inner wing. I got home, peeled the carpets back, took a prodder to it, and suddenly there’s no floor left. It snowballed from there really.”

So what was the rest of the car like?

“The paintwork was fresh when we bought it, but over time it developed blistering due to moisture, which left pin prick marks all over it. The seats had a tear, one of them split, there were a few knocks and bangs on the dash and the door cards, but generally it just needed a tidy up really.”

What has been your approach to this restoration?

“I had to scrap the previous car,” explains Carl. “As I started at the front, and worked backwards, only to discover the back end was too far gone. This time I stripped the whole car before starting.”

So where are you in the restoration now?

“Well, the paint only went on a week ago, so the first thing is to clean up the engine bay, which the girls will enjoy doing,” smiles Carl, as collective grumbling emanates from Paige and Jade. “Then it has to be undersealed, the clutch replaced, brakes overhauled, pop the windows in and the interior and it’s done.”

Jade, so have you enjoyed helping your parents out with the restoration?

“Yeah, it’s been okay,” she replies in a not too convincing tone. “Dad got us rubbing down the paintwork, which is okay, but really messy.”

Paige, how do you feel about the car, and are you looking forward to driving it when you pass your test?

“I’d like to drive it if Dad will let me, and I do think it’s cute.” Carl then turns to Paige: “But you told me you’d die of embarrassment if I ever collected you from college in it, didn’t you?” She giggles and nods.

So Carl, what has been the greatest challenge during the restoration?

“Honestly? Saving up to have it painted! Dave Price of Restor8 did the work at a really good price, as he was as keen to see it finished as we were, but that still took some saving. Anything else I have struggled with, I’ve just gone onto the A40 Farina Club forum and sought people’s opinions, and that’s been a great help.”

What has been the most valuable tool in the restoration?

“It’s not a tool as such,” begins Carl. “Having to work on a gravel drive, I invested a fiver in one of those foam mats you always see being sold at car shows. That’s been a godsend.”

You’re going for a black roof and a black bonnet, what prompted that?

“Well, it’s something different,” he laughs, “ but I think it suits the lines of the car better than just the black roof. Overall I want to go for standard with a twist, so we’re partly de-chroming it. The headlight surrounds and the bumpers are going to be black; as are the Rostyles I have for it, all over black.

Just subtle stuff really.” Are you going for any performance upgrades at all?

“I’ve got a stainless steel exhaust for it, but other than a Midget disc conversion up front – which is more for safety really – and converting the head to unleaded, it is staying standard.”

“We started working on it in October or November of 2012.”

What condition was the car in when you got it?

“It seemed to be solid, but the MoT had an advisory for rust on the floor and inner wheel arch, which proved to be problematic.”

In what condition is the car now?

“The body and engine are done. But the brakes need refurbishing, and of course it all need reassembling.”

“We’re hoping to get to our first shows in August,” explains Michelle, “so it’s busy weekends and evenings for us until then.”

I peeled the carpets back, took a prodder to it, and suddenly there’s no floor left. It snowballed from there. 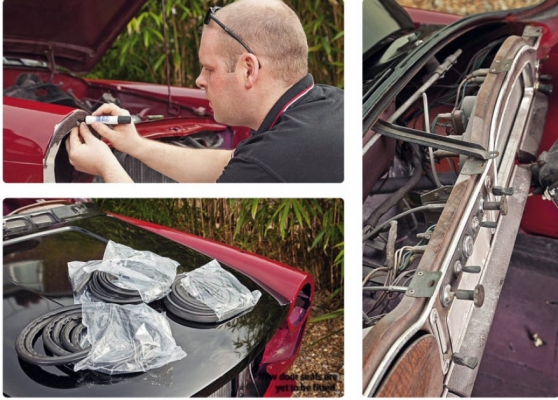 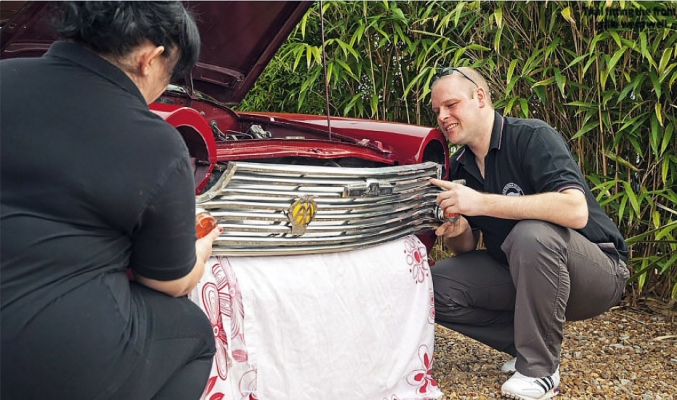 New door seals are yet to be fitted. 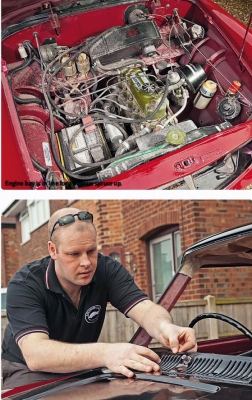 Engine bay is in line for a serious spruce up. 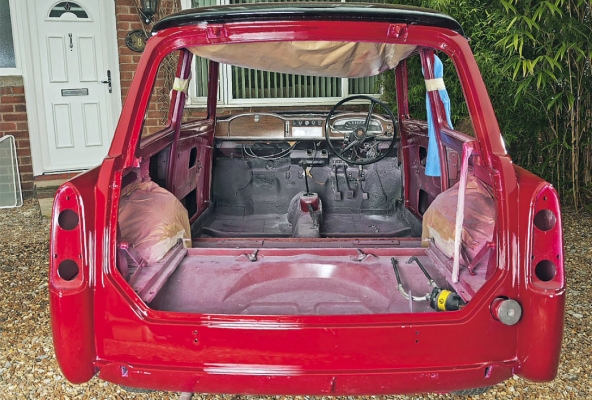 Fresh from the paintshop, the rest of the car now needs reassembling.

Elder daughter Paige has been heavily involved… along with younger sister Jade.