THE SULTAN OF SWING  This previously multi-celebrity owned E-type, with its 4.5-litre engine and triple Weber carburettors, was used for racing but is now pure fun. Word & photography by Jim Patten.

Rain was lashing down at Goodwood in 2015 when Tim Whitworth sought shelter in the auction tent. It wasn’t the E-type that caught his eye, but rather the numberplate it was wearing: 604 AW, perfect for his 15-year-old son Archie. Keen on the classics, it was as though the Jaguar already had his name on the ownership slip.

Tim was successful in his bidding, but He was aware that the car had a lot more to offer than just interesting numbers. As purchased, it was purposely finished with bucket seats inside and no centre console, just a gearlever sprouting out of a carpet-covered transmission tunnel. It also wore lightweight E-type-style Dunlop wheels. Best of all, it had a Forward Engineering 4.5-litre engine on triple Weber carburettors and a fascinating history, having first been owned by the Sultan of Brunei.

Tim and his wife, Amanda, were already well versed in Jaguar, owning the ex-GKN Mk 2 1 COA and a tool-room-replica C-type, to name but two. Tim first Approached M&C Wilkinson with his FIA E-type fixed-head, which it now prepares and runs on his behalf for historic racing. Amanda shares his interest and regularly competes in prestigious historic rallies.

Fortunately, their children are passionate, too. Well and truly bitten by the bug, the family has commissioned the build of a replica 1963 lightweight E-type competition coupe. So, with this passion and attention to detail in mind, it was only natural that M&C Wilkinson was given the task of returning 604 AW, cosmetically at least, to standard.

Built in 1967, the E-type was bought new by arch car collector, the Sultan of Brunei (he has almost 200 Jaguars among his 5,000-strong car collection). At some point, it returned to the UK and came into the hands of its second owner, David Morris of Bournemouth.

David set about converting it to race in the Mod sport series, a very popular and much missed category of racing, where just about anything was allowed, resulting in some of the most exciting racing of the time. Quite how successful this E-type was in that period, though, remains unknown. It stayed as a competition car when sold to Nigel Bourne, who fitted Series 3 ventilated disc brakes and calipers, and had the engine rebuilt by Ron Beatty of Forward Engineering. During these racing years, possibly during the Forward Engineering build, the engine was enlarged to 4.5 litres and gained three 45 DCOE Weber carburettors.

In 1973, Oliver Walker bought the car and continued the competition theme by entering the Jaguar into hillclimbs until 1977, when he ostensibly converted it back to a road car, leaving the race-tuned engine and other modifications in place. The bodywork went to one of the finest body specialists, RS Panels, for a back-to-metal refinish, when new headlight Perspex covers were added in place of the glass. In addition, Suffolk & Turley sorted the trim, and replica lightweight E-type Dunlop wheels were fitted.

Peter Hampton then took ownership of the car before entrusting it to Nigel Dawes to be sold. He orchestrated a deal in 1983 to Victor Gauntlett, one-time head of Aston Martin. The following owners read like a who’s who of motor racing: Sir Anthony Bamford is followed by Frank Sytner, who, it was noted, referred to the E-type as, “A D-type for the road.” In 1997, it was sold to long-time owner, Tim Greenhill.

From here on, the car’s file is awash with invoices as Greenhill returned the E-type to RS Panels for another back-to-metal paint job, also supplying a pair of D-type seat shells that were upholstered by Suffolk & Turley. Ron Beatty was once again called upon to go through the engine. All the usual consumables were replaced or rebuilt. Alan Collins fitted uprated rear discs, and the well-respected specialist Marcus Barclay subsequently maintained the car.

When the car finally reached the 2015 Goodwood auction, it had a healthy-looking specification: Forward Engineering 4.5- litre engine on triple Weber carburettors, with impressive extractor manifolds and a bespoke exhaust system, said to develop 320bhp; lowered suspension with uprated brakes and lightweight wheels, and those D-type-inspired seats. How could Tim Whitworth resist?

Once the car had changed hands, Tim and Amanda set about having some fun. The Dunlop alloys were changed to wire wheels and they commissioned M&C Wilkinson to return the original-style centre console, before carefully cleaning the seats and door casings to bring some life back into the interior. A red hood was specified, which, M&C initially thought might be too much. Perhaps black would be better suited? But when Suffolk & Turley returned the car, it looked excellent and the choice was vindicated.

The Whitworths use their E-type for everything – from everyday use to touring and the occasional competitive event, as witnessed by the Monit rally computer. Amanda was anxious to have the car returned to enjoy the decent weather and even had a shopping trip planned: the E-type being the perfect accessory.

It’s a long drive to M&C Wilkinson’s premises, but the hours of slog are always worthwhile when reaching a workshop surrounded by countryside and packed with delicious Jaguars. It is also my first opportunity to look in its new showroom with the Sayer Collection. The Sixties-inspired decor houses a number of impressive cars, including E-types, XKs, Mk 2s and a Sunbeam Tiger. Elsewhere, there is the hum of restoration, as well as the intense work on competition cars, which have all just returned from Donington.

As Michael Wilkinson unloads the E-type from the transporter at the top road, it gives me the unusual opportunity to study the car from below. The tailored exhaust system appears to be made from mild steel, finished in matt black, and looks very effective. I like this car already. There is no pretence with this purposeful E-type. Previous owners have stamped their mark and subsequent owners have either embraced it or changed it to suit, like the sensible reversion of the centre console.

Finished in a shade of gunmetal, the exterior is stunning, complemented by the red interior. We don’t need the hood up today – the weather is too good – but there is a hint of the colour, as displayed by the matching hood bag, finished in the same vibrant red.

Bumpers are now fitted, something that would have been absent in its racing days, while the Perspex headlight covers have been left in place, shunning the original-style glass covers with chrome surrounds; very distinctive they look, too. Behind the covers nestle modern H4 halogen headlights, needed to penetrate any barrier: glass or Perspex.

Elsewhere on the body, the details look standard to type. However, it’s a completely different story under the bonnet. Those big Weber carburettors make their own statement and, if you have any doubt, they shout speed. At the other side of the engine an equally impressive extractor manifold of tuned lengths awaits the gases, ready to expel them as efficiently as possible. There was no compromise over the system. The owners wanted this to stay and if repairs were needed, then so be it.

In between the manifolds, the cylinder head is painted red, reminiscent of the C-type cylinder head fitted to production XKs, but light years away in terms of efficiency. An inline brake servo is fitted to the left-hand side, bearing no resemblance to a Jaguar item – it is there for performance only. The radiator carries a huge cooling fan, encased in its own shroud. Looking down at the suspension, it is clear that this car has been the subject of some serious thought. The wishbone angles tell of the lowering, while the ventilated discs and bigger calipers offer the reassurance of efficient braking. Climbing inside the car and sinking into the D-type seats is thrilling. On the one hand, I am reminded of the sports racers; on the other, the E-type as a tourer shines through. A Nardi wheel, favoured by Italian exotica, has replaced the three-spoke original steering wheel. With its build quality and strength, it is easy to see why.

I am not a fan of Weber carburettors on a road car and expect to be cranking the engine for a while to start the 4.5-litre unit from cold. But, a few pumps on the accelerator pedal are enough to waken the beast and it shouts its intent through the glorious exhaust system.

I let the engine run, blipping the throttle occasionally as the engine warms – I don’t want to cough and splutter down the road. We’re soon clear and ready to go, pulling away with very little fuss. The clutch is light, given that it is race-biased, and the fine gearchange is through Jaguar’s own four-speed all-synchromesh ’box.

At first, I amble around. But once away from the traffic I can give the car its head. As the revs pile on, speed increases at an impressive rate. The sound from the exhaust is addictive and I want to change down just for the hell of it to take in the decibels. Corners flow into one another, and, as my confidence grows, so does our entry speed. Handling is neutral enough not to be forced into corrective measures, but I’ve already been on one speed awareness course and I have no intention of a licence-threatening follow up.

The brakes are impressive – there is little need for massive aluminium ones on dustbin lid sized discs, given the efficiency of Jaguar’s stoppers. Turn-in is crisp, although the steering is a little, tight, which is okay for racing, but I would prefer to feel the wheel returning through my fingers on the road, as the castor dictates self-centring.

Although this short drive sees the typical road restrictions in place, I have enough experience of E-types to see that this car has a huge amount to offer. It has already been rewarded with many road miles and the family are contented to do many more. After all, Tim and Amanda have to make sure that this E-type is ready to be handed over to Archie as soon as he comes of age. And, for that, it must be tried and tested.

Once the car had changed hands, Tim and Amanda set about having some fun

BELOW: Perspex headlight covers replace the original glass with chrome surrounds. ABOVE: The interior is now back to standard, although the D-type-style seats remain 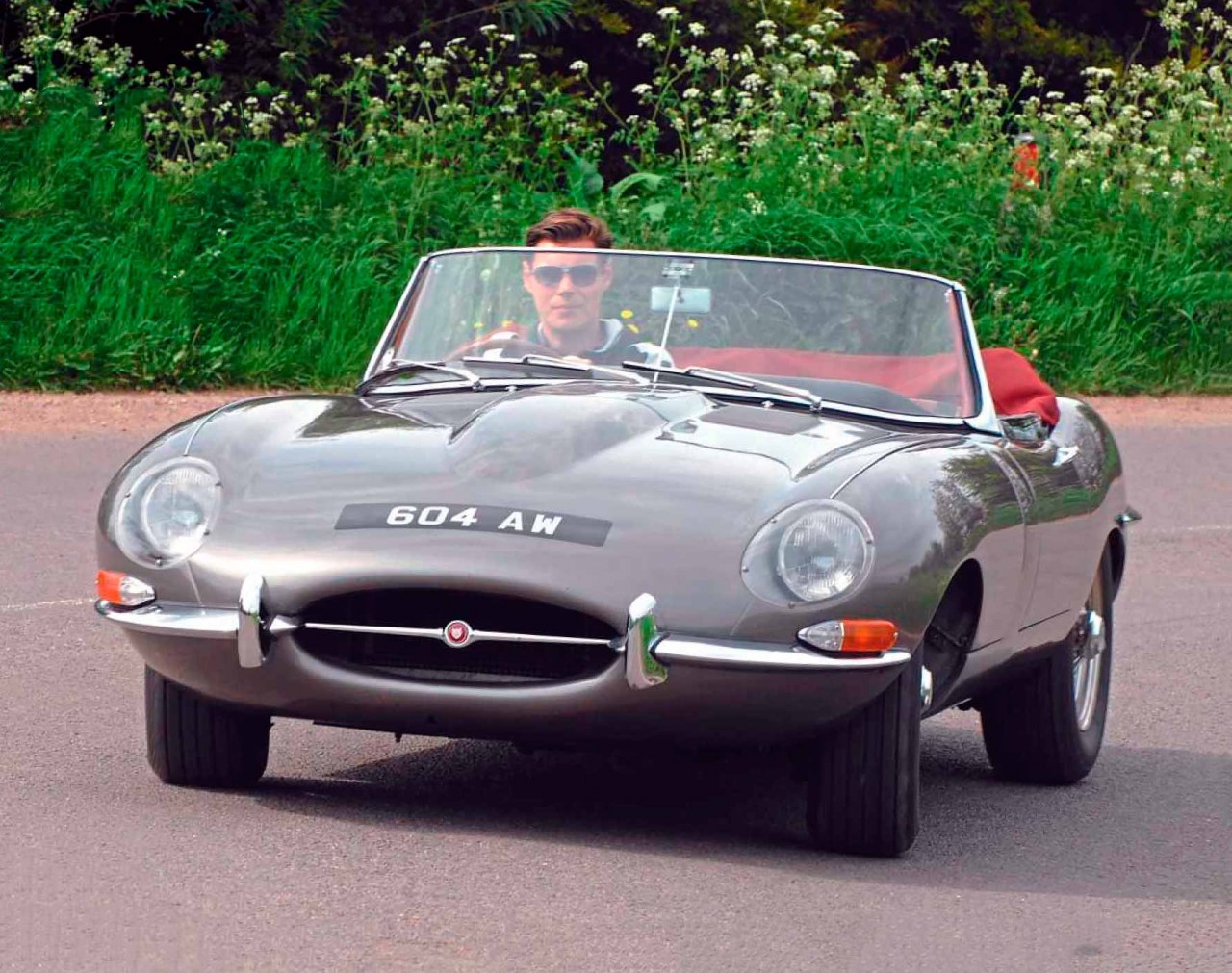 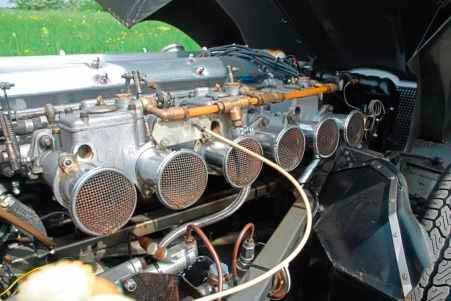 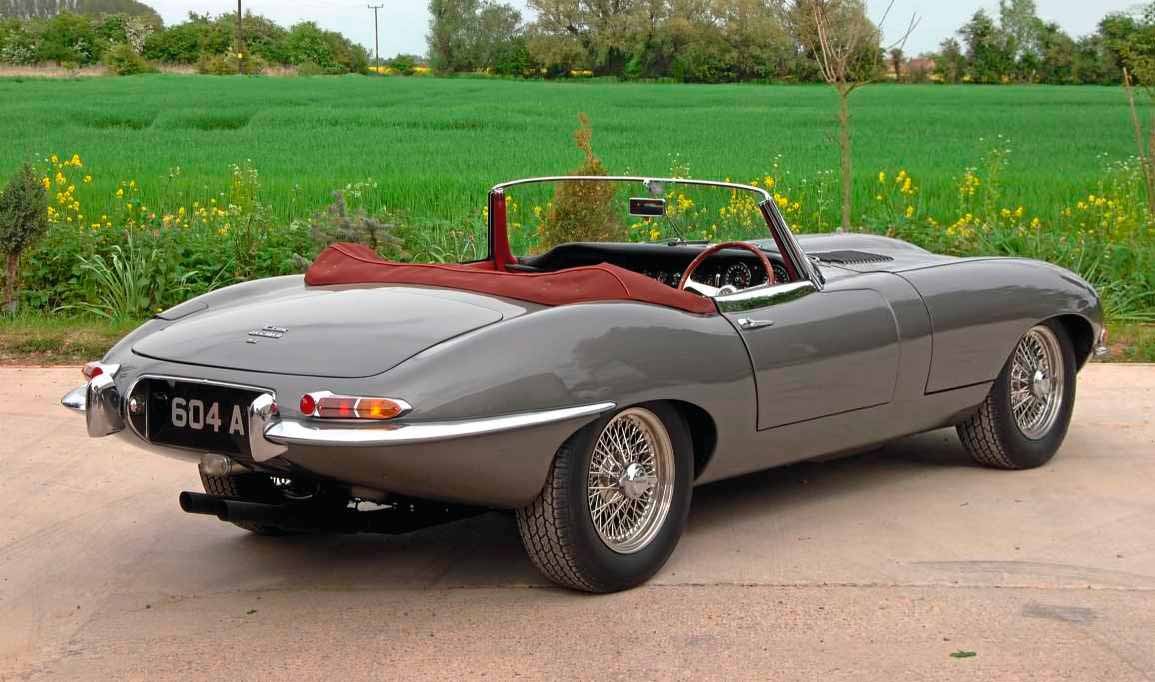 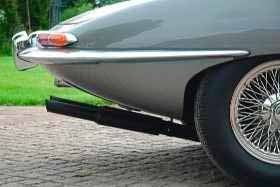 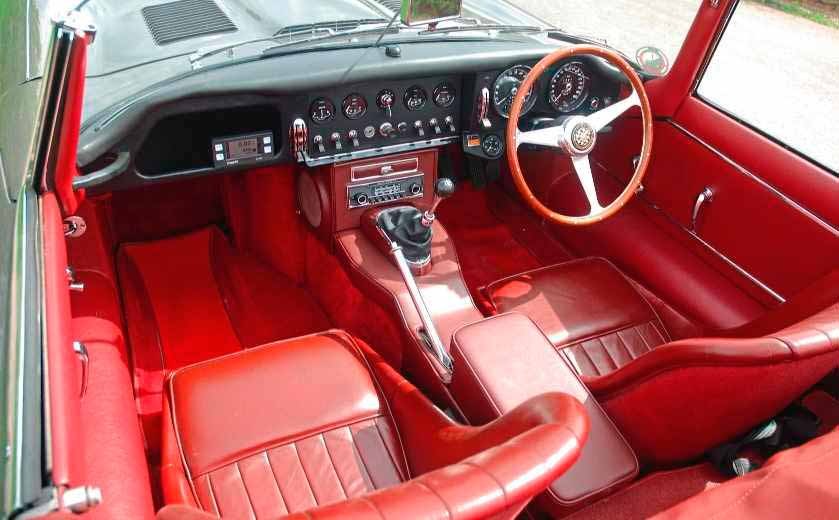 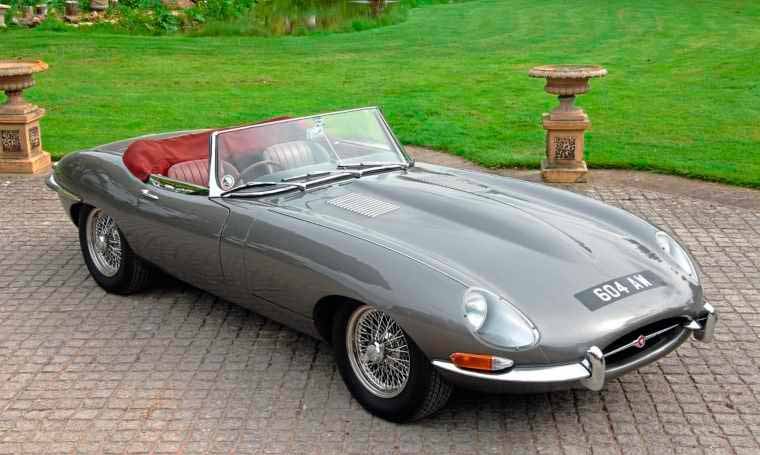 RIGHT: Monit rally computer indicates that this car does more than just shopping. BELOW RIGHT: The exhaust system was made specially for the car, with a sound to prove it. Forward Engineering 4.5-litre engine on triple 45 DCOE Webers.