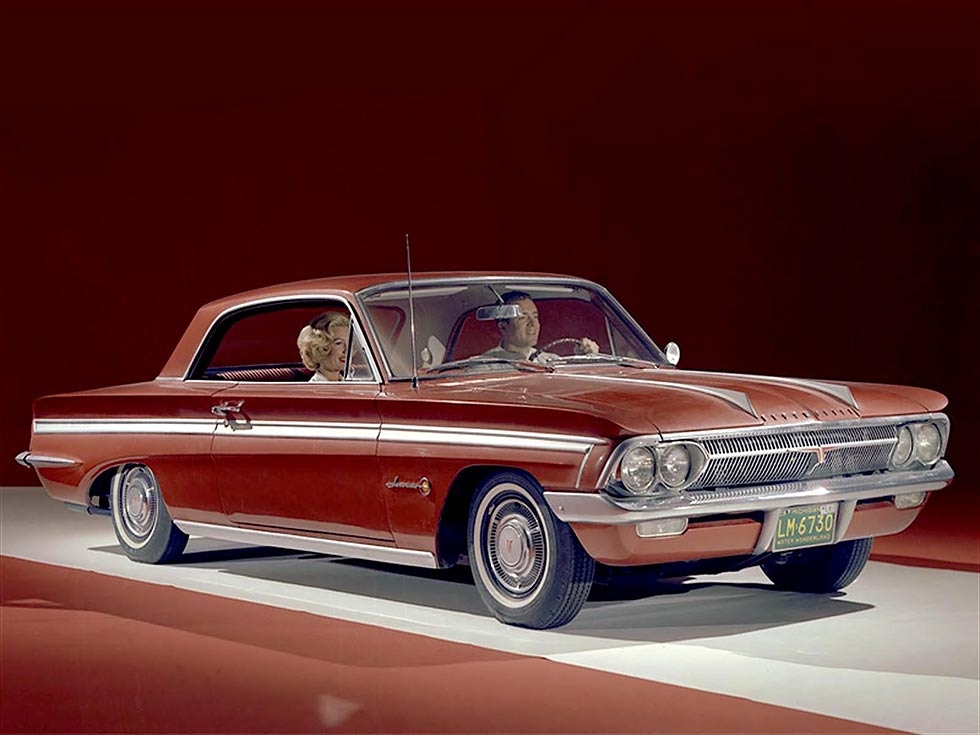 Huw Evans Across the Pound. Turbo power Evans discovers that history has a funny habit of repeating itself…

These days, Detroit automakers are using turbocharging as one method to try and meet tough Corporate Average Fuel Economy standards. You can get a whole range of relatively small displacement turbocharged and direct-injected EcoBoost engines from Ford, in everything from a compact Focus to a fullsize F-150. Over at Fiat Chrysler Automobiles, turbocharged engines can be found in everything from compact sedans to Jeeps. Even General Motors offers them in Buicks, Cadillacs, Chevrolets and GMC vehicles.

Yet, like many things in this business, using turbocharging to improve fuel economy while maintaining performance is nothing new. In fact, Detroit has been offering turbocharged cars since the early Sixties. The very first production examples were offered for the 1962 model year. The Oldsmobile F-85 Jetfire compact featured a 215 cubic inch, turbocharged V8. This engine sported a relatively high 10.25:1 compression ratio, so in order to prevent detonation Oldsmobile fitted a Garrett turbocharger that operated with a special Turbo Rocket Fluid (distilled water, corrosion inhibitor and methanol). This was squirted into the combustion chambers to cool cylinder temperatures and prevent detonation under load. In order to limit the engine’s ability to self-destruct a turbo bypass was fitted to operate if the fluid level got too low (remember, this was in the days before knock sensors).

That same year, General Motors also introduced the Corvair Monza, which was available with a horizontally opposed, 145 cubic-inch turbocharged six. In order to cope with forced induction, the Monza’s engine was beefed up with a stouter valvetrain, stronger pistons and bottom end and colder spark plugs. With a maximum of 10psi of boost, the little engine cranked out 150bhp, nearly 70 horsepower more than the naturally aspirated version. Yet for all their ingenuity, these cars failed to perform well in the marketplace. The Jetfire was plagued by reliability problems (many owner-inflicted) while the Corvair was simply too unconventional for many Americans, with early models developing a reputation for ill handling.

A decade later in the Seventies, the onset of the first oil crisis and the introduction of Corporate Average Fuel Economy (CAFE) standards, saw a renewed interest in turbocharging. Another was the ability to maintain performance while also meeting increasingly stringent emissions standards. For its 1976 Century Pace Car at the Indianapolis 500, Buick installed a turbocharged 231cu in V6. The blown engine was chosen simply so the car could maintain adequate speeds of 90-120mph during the parade and caution laps of the race.

While these carburetted versions weren’t the most reliable or efficient, they, along with Ford introducing a 2.3-litre four-cylinder turbo in the 1979 Mustang, paved the way for a host of more powerful and significantly improved blown Detroit engines the following decade. Pontiac also tried turbocharging its 301 cubic inch V8 for use in the 1980-1981 Firebird, but it didn’t prove popular and was binned with the third generation redesign.

Electronic fuel injection was becoming a mainstay for petrol delivery by 1984, and along with better air/fuel mapping and waste gate operation, helped result in a new generation of ever faster turbo Detroit iron. These included cars such as the 1984-1986 Ford Mustang SVO as well as the Buick T-Type, Grand National and GNX. In fact the latter – which went on sale in 1987– was just about the fastest-accelerating car you could buy in North America at the time, with one example clocking a 4.7 second, 0-60mph time during instrumented testing.

Alongside these Mustangs and Buicks came a growing number of potent Chrysler Corporation K and O-car derived hot Dodges and Shelbys, such as the Daytona Z and Shelby Charger/Omni GLH. Joining them was a growing horde of small sporty Japanese cars and transplants such as the Eagle Talon, Plymouth Laser turbo and Dodge Stealth R/T.

The ultimate hurrah for this era of Detroit Turbo cars came with the 1989 Pontiac 20th Anniversary Trans Am and the 1991-1993 GMC Syclone/Typhoon pick-up/SUV (the latter turning the burgeoning truck culture on its ear). Both machines could scoot to 60mph in well under six seconds and give almost anything on the road a run for its money. Yet, as the Nineties unfolded, turbos fell out of favour in mainstream automobiles, as Detroit increasingly turned its attention to multicam, multi-valve cylinder heads and more efficient transmissions as a way to balance both performance and fuel economy.

Here we are, now 20 years on from the Nineties and thanks to tighter CAFE standards enacted in 2011, once again, turbocharged vehicles have staged a comeback. Yet the question is, how will we view these cars and trucks another 20 years from now? Looking through current eyes, history hasn’t tended to judge turbocharged technology that well. Many of these cars have long since gone to the scrapyard and an original, turbo-powered Detroit classic doesn’t tend to be a common sight on North American roads.

And there’s a reason. Owning and maintaining a classic turbo car today often requires a good deal of knowledge, skill and tracking down hard-to-find parts to keep it running. Yet when you get the chance to experience something like an SVO, Grand National, Turbo Trans Am or Syclone, it delivers a driving sensation that’s truly unique among Detroit Iron.

And, with Eighties nostalgia currently enjoying a resurgence, such machines are finally getting the retro parking spot they deserve, taking pride of place at the cruise night, dragstrip or show field, right alongside their illustrious big-cube muscle car predecessors. It will be interesting to see how the likes of Turbo 2.0-litre Camaros and Cadillacs, not to mention EcoBoost Mustangs and F-150 Raptors, will fare in another 25 years.