An ability to cut, shape and weld metal coupled to a determination not to be distracted by fripperies enabled John Clarke to build his eclectic collection. Words Iain Ayre. Photography Andrew Snucins.

John Clarke made a conscious decision to avoid distractions such as television and Facebook so he could devote his spare time to restoring his collection of cars, and leave a little aside for playing his guitar and singing rude songs on YouTube about politicians.

There’s no theme to this Canadian-based collection other than Britishness and a penchant for MGs, but the cars do paint a representative picture of British Columbia’s current classics.

With the exception of a temporarily hors de combat Jaguar E-type there’s little serious fi nancial value to the collection, but that isn’t the point. John is an educator – his working days have included teaching in schools and lecturing at his local university on mechanics, welding and manufacturing – which precludes huge wealth. He acquired most of his cars as near basket-cases, applying the effective buying technique of leaving a derisory offer and then biding his time. He is also lucky that his wife Carol is onside and has a good sense of humour.

Canadian culture is largely based on not being American, in the same way that Scottish culture is about not being English. Clarke’s MGA MkII is balanced on a knife-edge between British/Canadian taste and American taste. His other MGA roadster is a true Brit – red paint, plain silver steel wheels and standard black interior. An American restoration of the MkII would have given it chrome wire wheels, bright metallic paint and a white vinyl interior. Taking its restoration in a different direction, Clarke got it just right – it’s flash but without being flashy, not an easy balancing act. The leather interior is parchment, not white, and the chrome wires suit the metallic Woodland Green paint, a colour used on a specific historical MG factory Twin Cam prepared for Mike Ellman-Brown. The Deluxe dashboard trim adds minor chrome trimming bling.

The car was fairly rough when he got it – it was for sale because a neighbour hated wet-knee winter commuting – and Clarke got it for $400.

As usual, he hand-made all the replacement panels needed to repair the bottom few inches of the car. He has taught body restoration daily for work and still does it in the evenings for fun.

Taking it for a test, I immediately enjoyed the car’s solidity, stability and sorted stiffness. John drives it hard, enjoying the revs and the handling. There’s not much power – maybe 80bhp – but it can fully use all that’s available and can be trusted not to present any unpleasant surprises. It’s too perfect to get much use, however.

John’s neighbour Norm sells fast boats and bought the Corvette new in 1980. His reduced post-divorce collection still included the Corvette, but John kept at him and got the car at three years old. It came with a matching Chevy-engined boat, too powerful to be insurable.

The Corvette is a rare 1980 black-on-black- on-black: paint, interior, tyres. It came with Firestone race tyres, but they tramlined on ruts and would let go quite violently. He now runs and recommends Dunlop GT Qualifiers. The unused steel Rally wheels that came with the car new remain in boxes. The Corvette has a 350ci (5700cc) smallblock V8, one of the last of the 230bhp L82 engines before emissions strangulation tightened up. Just 100 of the Corvettes came to Canada in 1980, with ten going to BC, half of which crashed. Despite the car’s low 92,000 kilometres (51,000 miles) Clarke has rebuilt the engine. ‘Chevy made lousy cams, and the lobes were gone. I rebuild the engines in all my cars, and I gave this one another 80bhp while I was at it.’

Driving the Corvette is interesting. The C3 body is the most dramatic and sculptured of all Corvettes. The glassfibre body is good and the leather seats are worn-in but not worn-out. The cockpit is otherwise plasticky, though, and the dash seems oddly far away.

The engine, despite Clarke’s ministrations, is quiet and civilised, but you can feel the lack of torsional rigidity in the primitive single-layered chassis, not much changed since 1953. The car has factory Gymkhana suspension for slalom use.

Sadly, Clarke’s most cherished car had been in the wars prior to our photoshoot after it was badly rear-ended by a scooter. It went to restorer RWM (rwmandco.com), which is having an unofficial competition with a rival to achieve the world’s most perfect paint job – the E-type is the playing field.

Clarke had needed an E-type since he was 16 when he spotted possibly the first example imported to Vancouver in 1961. He saw it outside a baseball park and missed the entire two-hour game because he was looking at the Jaguar.

In 1997 he finally got one. The owner had dismantled it pre-divorce and never managed to restore it, despite spending $24,000 on storing it for a decade. Clarke has a rule about never buying a dismantled car because they are never complete. But this was an E-type, so if the owner could produce a list of 100 obscure parts he would buy the car. After 66 successful searches Clarke was convinced the Jaguar was all there and handed over $9000. Not a bad buy, even in 1998.

Again, the restoration panels were constructed from sheet steel and talent, with the brand-new complete bonnet having to be taken apart and assembled properly. The result was a car that has starred in a film along with a polar bear, featured in a sunglasses ad campaign and won a North-West Jaguar Club of North America concours championship – although Clarke is more proud of its slalom successes. Being shiny is one thing, but being proven competitive is another.

Mk IX Jaguars are a harder sell because body parts are unavailable. That’s bad news for owners, but great news for Clarke who makes all his own repair panels anyway. This MkIX was dry-stored for 30 years before being recommissioned by a movie personality whose wife then broke down in it. Clarke knew that any commercial rust repair would cost a lot more than the car was worth.

However, the engine, seats and woodwork were fi ne and it was a worthwhile project for him at the cost of much sheet steel and four years of winter welding. It normally wouldn’t have taken him that long, but injuries including back problems from the E-type crash reduced restoration to a crawl. Like many of his cars he painted it in the open air on his driveway in early May when the air temperature and humidity are perfect, and when all the bugs and pollen that would mar the paint’s perfection have yet to emerge.

Sure, white paint can cover a multitude of sins, but the MkIX has won awards at a host of shows. That’s all very well, but what Clarke most enjoyed was beating all but one of 81 Mk2 Jags in the Jaguar Club North America slalom. Who knew that MkIXs carrying an extra 1000lb handle better than Mk2s? Actually, Rowan Atkinson does, which must be why he races one.

When he was 18 and buying his first car to drive to college Clarke took the seemingly sensible advice of his father and got an MGA rather than a Jaguar XK120 C-type, reputedly the third of three built for Le Mans but not used.

‘You’re going to college,’ said Dad. ‘You need a car with a roof, and the whole family doesn’t have enough money to repair that Jaguar engine if it goes wrong.’

With that story in mind, maybe we should be trying to guess which currently cheap and available cars will be tomorrow’s revered auction-contested gems.

Fifty-two years later Clarke still owns the MGA, and very nice it is too after a gentle restoration retaining everything except rusted sheet metal underneath. But nobody, including him, ever looks at it without thinking, ‘That’s nice, but it’s no C-type.’

When Clarke was 22 his dad asked him to take Mum to the dealership to help her buy a car for towing the family caravan. As soon as they arrived Clarke noticed a blue two-door Galaxie. He patiently listened to the sales patter for other cars before starting casual but effective bargaining for it.

Powered by a Hi-po 390 V8 with 325bhp, it towed the caravan to the Arctic, to Mexico and to many other destinations. Clarke has done all the servicing and repairs himself and refreshed its fading paintwork in the same colour. Other than that the Galaxie is original. After teasing him that they planned to sell the car, Clarke’s parents gave it to him on his 50th birthday.

Clarke’s MGB was owned by a friend who was very ill and needed money but couldn’t find a buyer for the car. There are usually around 20 MGBs for sale in Vancouver, so it’s much easier to buy one than to sell one. Clarke paid more than the MG was worth, but he already had a huge spares store provided by another MGB project, so he had no trouble sorting out minor issues such as a leaking fuel tank. It’s now used almost every day, particularly if the weather is wet or miserable when the nicer cars stay inside. Clarke reflects that it’s actually his best all-round car – fun, fast enough, reliable, comfortable, cheap to run, pleasing to look at and listen to, and he doesn’t have to worry where he parks it.

Clarke intends this white MGA Coupé to be his final restoration project – although who knows what else will turn up in the meantime? It was an abandoned 15-year restoration. It was on an overgrown, mossy driveway and the owner wanted $2500 for it. Clarke offered $700 and said he would pressure-wash the driveway. Sold. It’s destined for long-distance touring, so after its body restoration it will be given an MGB engine, overdrive gearbox, a high final-drive ratio and 15in wire wheels.

A perfect, powdercoated chassis and a restored, rust-free spare Jaguar MkIX body lurk in a covered race trailer, with many boxes of bits and a rebuilt 3.8-litre XK engine. They were bought by a friend who faced divorce after trailering home one pile of bits too many, so John rescued him by taking them off his hands. The trailer probably contains enough parts to assemble a complete car, so that may yet happen.

A 1962 MGB bodyshell suspended from Clarke’s garage roof was rough when he got it, but at least there was something left to weld to and he’s pretty much replaced all of its lower 4in. He has more than enough parts to make a complete car. Some day. 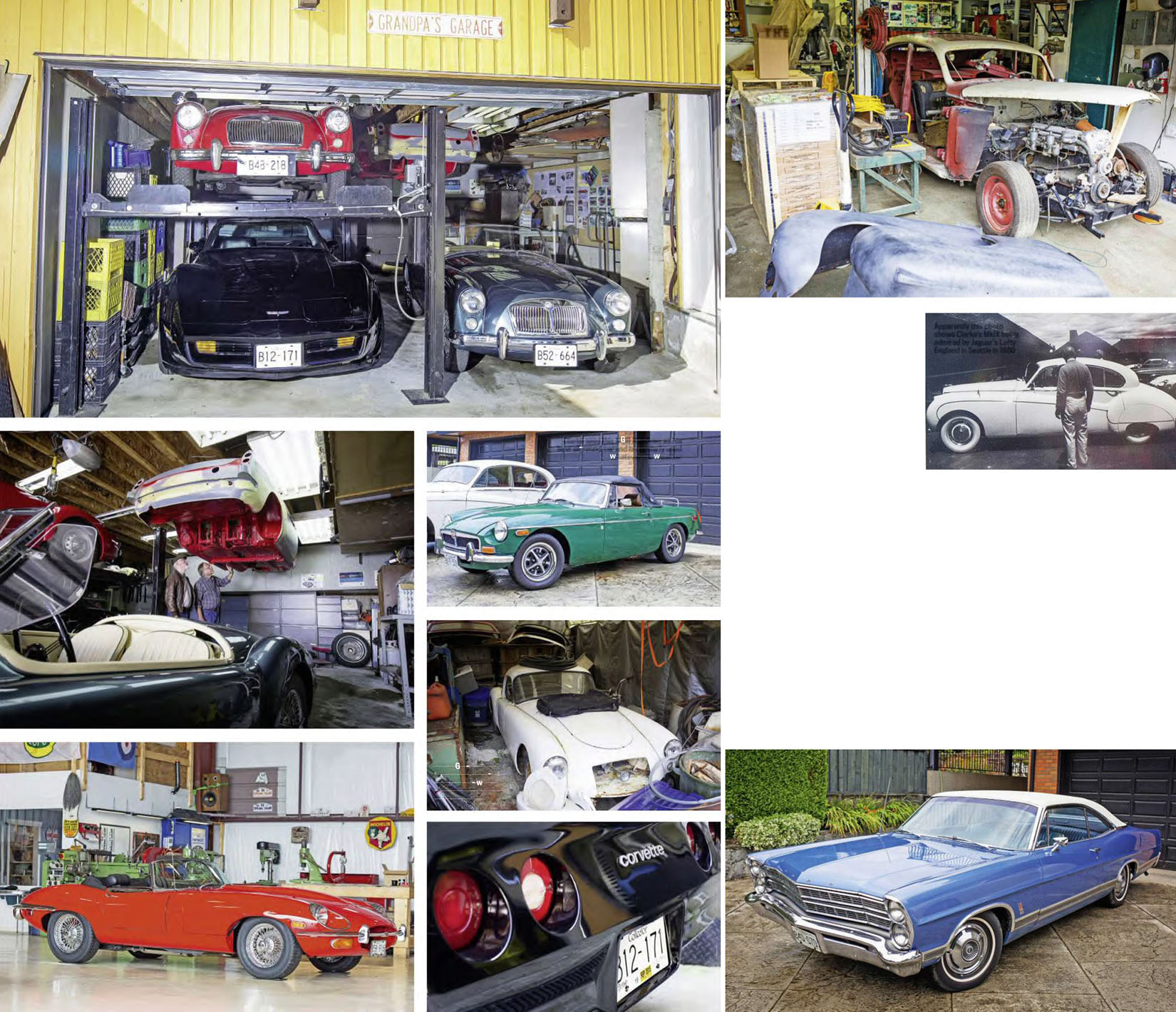