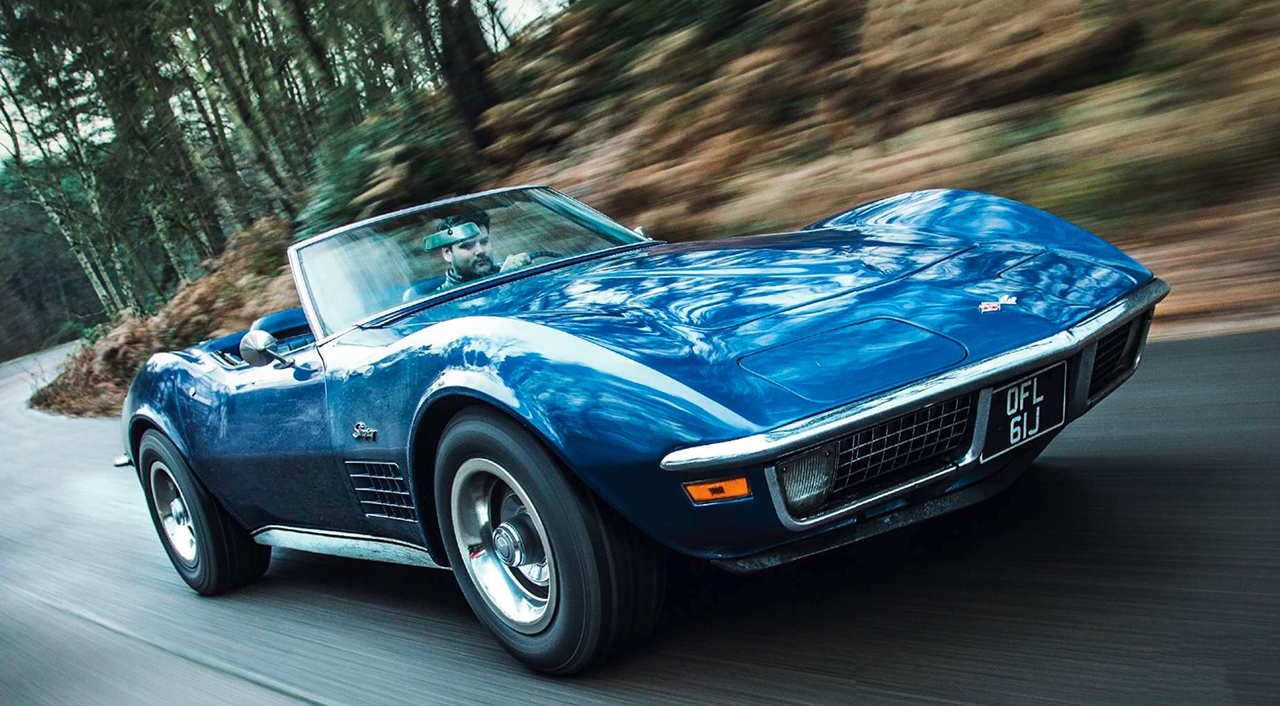 Chevrolet Corvette Stingray C3 – test-drive. Speaking of glassfibre and E-type rivals, if our prospective drop-top customer was American he could buy a Corvette Stingray for a similar price. And judging by sales figures alone, he probably did. In 1970, the year of this Stingray’s birth, Chevrolet built 17,316 of them. By contrast, Jaguar took four years to sell 18,809 Series 2 E-types. It may show signs of this cost-optimised mass-production in places, particularly the crude stitching on the vinyl seats and dashboard, but the Jaguar isn’t perfect either, and what the Stingray loses in fine execution it more than makes up for in sheer drama.

These were the Earthbound chariots of NASA astronauts during the height of the space race, and it shows. The fixed driving position is as reclined as Apollo XI’s, and the steering wheel semi-mimics the control yoke of a Sixties jet-interceptor, with the long column extending visibly as far away as my ankles and the wheel thrust towards my chest. Every instrument is deeply cowled and angled in my direction. It’s like a Lockheed Starfighter in here.

Take-off is almost as violent. Fire up the 5.7-litre small-block V8 and the whole car shudders as the exhausts cough potently. Clank it into ‘Drive’ and feel it strain, struggling to contain 300bhp.

The accelerator pedal is large and springy, and demands to be stamped on with vigour, so I do. The V8 bellows psychotically as the rear end squats, the gargantuan 255/60 R15 rear rubber – at the time, the biggest car tyres in production – claws at the tarmac and the Corvette surges forward in the same 6.6 seconds as the Lotus, achieving it with 380lb ft of torque at 3200rpm rather than peaky twin-cam power and light weight.

There’s so much torque, any qualms over the automatic gearbox can be ignored. Chevrolet Corvette Stingray C3 uses 5.7-litre V8 to match Elan’s 0-60mph time.

Pub pundits will have expected this blood-and-thunder drama, but they’ll also say that the Corvette, being American, will suffer from high-speed wander and terminal brake fade, and will corner with the finesse of an uncooperative zoo animal. They’re wrong.

The first hint that the Stingray may be more sophisticated than this comes when I fire it up on this dark, drizzly morning and find myself waiting for its hydraulic circuits to pressurise. We’re used to hearing such rituals with regard to hydropneumatic Citroens, and waxing lyrical about it being part of the reflective Gallic character. Stereotype dictates American cars are uncomplicated, jump-in-and- drive, fix-it-with-a-lump-hammer machines.

However, the Stingray features vacuum flaps concealing the headlights and windscreen wipers as part of a comprehensive aerodynamics package. Although Larry Shinoda’s original design was beautiful, the Sringray became very unstable at high speeds, which resulted in Corvette chief engineer Zora Arkos-Duntov adding a Kamm tail inspired by the Porsche 904 GTS, and a subtle chin spoiler. The wing vents are fed by the front grilles – more Arkos-Duntov additions – channeling underbody airflow smoothly and efficiently through the nose and providing welcome downforce in the process.

I can feel it all working too – push the car harder and the steering firms up, the nose responding to small corrections, extracting more grip from the huge 235/60 R15 front tyres. At 120mph, according to Chevrolet’s contemporary test-drive data, the nose rises a mere 16mm from its position at rest thanks to Arkos-Duntov’s downforce measures. Unmodified, that figure was 57mm.

I won’t pretend the Stingray handles as neatly as the Lotus. It’s nearly six feet wide, and this needs respecting, but it can hold a racing line with ease and carry plenty of speed into corners. There are rules to follow, of course – lifting off the accelerator mid-bend, or thumping torque to the rear when I haven’t completely exited a wet roundabout will result in a lairy slide.

But once I’ve worked the Corvette out it’s actually easy to maintain a high-speed bend-to-bend flow that works on British A-roads. It’s not even hindered by its automatic gearbox given the

surfeit of torque on demand. Sadly, as with all ‘aero’ cars, the Stingray was born to be a coupe. In this roadster it’s a fact not just manifested in the colossal wind roar – not helped by windows that just won’t seal properly – but in intrusive scuttle-shake that plagues the Corvette every time I push it beyond 60mph. I can put up with it, but I can’t help but think that the T-top version with its integral roll bar would solve almost all the car’s problems.

By 1976, fearing that legislation would outlaw convertible cars, Chevrolet curtailed roadster production anyway, but in this test the Jaguar’s more rigid structure trounces it.

However, it’s worth pointing out that no matter how attention- grabbing the E-type always seemed to be, the Stingray enjoyed a stronger presence in Seventies popular culture. NASA and Neil Armstrong aside, Jimi Hendrix and Roger Daltrey owned them, Deep Purple’s Highway Star on the Machine Head album was about one, as was Prince’s hit single Little Red Corvette. Only Dead Mans Curve by Jan & Dean put the E-type in the charts. The other car in that song is a Corvette.

Matt Eaglestone: Chevrolet Corvette Stingray C3: It’s funny you should mention E-types, because a friend of mine has one and he’s always looking wistfully at the Corvette,’ says Matt Eaglestone, who rents his Stingray out, along with other American cars, at thunderroadclassics.com. ‘Every time we intend to go out for a drive, the E-type is in bits while the Corvette is solid, simple and starts first time. Everything can be repaired quickly and cheaply apart from the vacuum system, which employs what seems like several miles of pipework.

‘People say these don’t go round corners, but they just don’t understand Corvettes. It was quite advanced for its era, with independent rear suspension, and they don’t wallow or understeer – in fact you can get caught out in the wet, they snap round quickly.’