CELEBRATING THE COUPE Celebrating the iconic 123-series Coupe model by taking a closer look at a pair of great examples.

The coupes presented in Geneva are aimed at automotive enthusiasts who value optical individuality and visible verve in their vehicle,” reads the Mercedes-Benz press kit, dated march 1977. “The unmistakeable character… is down to the more steeply raked front and rear window plus the fully retractable side windows which are not separated by a centre post. The result for the observer is a long and more dynamic-looking profile. For the occupants this means outstanding visibility not hindered by a thing.” 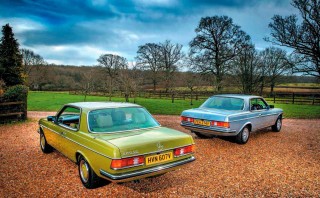 So proud was Mercedes-Benz of its new 123-series Coupe, the company went the extra mile for the car’s world premiere. Mercedes-Benz gave three versions – badged 230C, 280C and 280CE – their big reveal at a highly exclusive location next to Lake Geneva, before resuming normal procedure and displaying them at the Geneva Automobile Salon in the Palexpo trade fair centre on Thursday March 17 1977. Sporting gorgeous Fuchs alloy wheels, the cars at the waterside villa were presented to their audience (a throng of cravat-wearing journalists and guests of honour) with all side windows lowered to emphasise their pillarless design. It would have taken much to steer attention away from the snow-capped mountains surrounding the Lake Geneva venue, but the 123’s sleek form managed it.

Inside the Palexpo centre, Mercedes-Benz had put the range-topping 280CE almost literally on a pedestal, parking the twin-cam six-cylinder model on a raised platform and surrounding it with spotlights, its lesser powered brethren fighting for their own portion of limelight on the carpeted areas below. Visitors to the motor show couldn’t miss the 123s as their chrome trim sparkled away, and that was the point.

Key to the C123’s appeal was its 43mm lower roofline (meaning a more raked windscreen), and 85mm shorter wheelbase than the W123 Saloon on which it was based, giving the two-door a far more, if still discreet sporting air. The Coupes shared the 280E Saloon’s wideband halogen headlamps, as well as the Saloon range’s chromed inlet grilles in front of the windscreen, and chrome trim beneath the rear lamps, but there were some other differences. The Coupe’s shortened wheelbase impacted on leg and headroom for rear occupants, although it did feature wood trim (walnut root veneer and later Zebrano) on the centre console and dashboard as standard. Whether that luxury finish was consolation for adults cramped into the back isn’t clear… 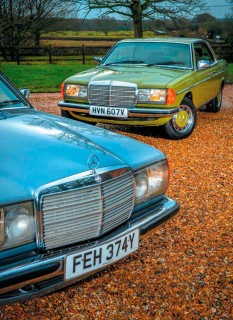 As with the Saloon, the 123 Coupe was equipped with double-wishbone front suspension, a semi-trailing arm rear axle, recirculating ball power steering, disc brakes all round, and rear-wheel drive. The 123 Coupe also boasted an evolution of its W114 predecessor’s ‘safety passenger cell’, adding a stiffer roof frame structure, tough roof pillars, reinforced doors, plus more effective front and rear crumple zones to the mix.

I personally love describing the 123 range because it’s so blissfully simple, no matter whether you’re discussing the Saloon, Coupe or Estate. At launch in 1977, the Coupe line up consisted of three models: the four-cylinder, 108bhp 230C (carburettor), the four-cylinder, 154bhp 280C (carburettor and not sold in the UK), and the six-cylinder, 175bhp 280CE (fuel injected; power increased to 182bhp from April 1978). The five-cylinder, 77bhp 300CD diesel joined the range in September 1977 (North America only; power increased to 83bhp two years later), before it was replaced by the five-cylinder, 119bhp 300CD Turbodiesel in August 1981 (also a North American model only; power increased to 123bhp from October 1982).

In between that revision, in June 1980 the carburetor equipped 230C was replaced by the four-cylinder, 134bhp 230CE with a then new M102 engine. As with the 280CE, the ‘E’ denoted ‘Einspritzung’ or injection/fuel injection. Transmissions comprised a four-speed manual, a five-speed manual (optional on some models from October 1981), and a four-speed automatic.

In august 1980, the 123-series could be equipped with abs anti lock braking technology, and a driver’s airbag was added to the options list from January 1982; at the time, no other manufacturer offered such a life-saving feature. The 123 range was facelifted that September, although the only notable changes to the Coupe’s exterior were the replacement of the chrome ventilation louvre in front of the windscreen with a black grille, and eight new paint colours to choose from. The cabin received more generous quantities of material on both the seats and door panels, and the front chair backs were redesigned in order to create more legroom for those seated behind.

That was then, but what about now? How has time treated the two-door 123? Pretty well, I’d say. The Friedrich Geiger and Bruno Sacco design remains extraordinarily handsome, and the Coupe’s lack of rear space is now of minimal concern. The two-door 123 is deemed more valuable than the Saloon, although isn’t quite as sought-after as the magnificent T-model Estate. A Coupe needing lots of work can be bought for around £6,000, while the very best, low mileage cars command closer to the 20 grand mark, or perhaps slightly more in some cases. With that in mind, we’ve taken a closer look at what a solid £20,000 budget can get you when it comes to the most popular 280CE model, and two such examples are pictured here, currently for sale at Charles Ironside Classic Cars in Hampshire. Both are equipped with a four-speed automatic, the earlier 1980 Cactus Green 280CE displays just 68,900 miles on its odometer and is a very original, untouched car while the fabulous looking, silver metallic 280CE from 1983 has covered 139,500 miles and is up for the same price, having been treated to a recent overhaul and mild restoration.

There’s a real honesty about the 123-series Coupe. It delivers exactly what its creator promised

The 280CE is an evocative slice of modern classic Benz. Its 2.8-litre M110 engine is quieter, smoother and more punchy than the four-cylinder models. Peak power comes in later, so there’s incentive for working the six-cylinder harder than you would the four-cylinder, and indeed you are rewarded for your efforts with a delicious mechanical growl as the M110 closes in on its redline. Ease off again and the 280CE reassumes the role of cruiser with just a hint of ‘engagement’ thrown into the mix to retain the driver’s attention.

But I’ve never found myself chasing apexes in a 123-series and that includes today, the 280CE very happy at a canter in modern traffic and hardly feeling strained when asked to accelerate. The ride is a touch more fidgety than a Saloon or Estate’s, but that’s the trade-off for a slightly more involving drive; the C123 turns with a touch less hesitancy than its siblings, no doubt due to its smaller footprint and lower centre of gravity.

Compared with that of a brand new car, the 123’s cabin is teeming with amazing textures. The rubberised steering wheel rim is at once rough to the touch yet squidgy-soft; the fabric seat upholstery is almost granular in its finish yet grips you firmly and is soft under bum; the ventilation controls would serve well on a tank yet move with delicate precision; the electric window switches emit a subtle click when pressed and stir strong-sounding motors buried in the door cards. All of these sensory pleasures combine for an unmistakable Mercedes youngtimer experience. Sometimes I wonder why we would choose to buy anything else.

The later silver example appears the better equipped of the two cars here, boasting electric rear windows and leather trim, and I imagine its silver over blue colour scheme appeals to a wider audience than the period green-on-green combo of the earlier car. However, I think the latter’s Cactus paintwork, matching upholstery and colour-coded hub caps make it a more distinctive and memorable car. I even prefer the ticking clock in place of a rev counter. You approach this 280CE with a smile on your face, and your grin only increases when you drive it.

There’s a real honesty about the 123-series Coupe. It delivers exactly what its creator promised: being a Mercedes-Benz it’s superbly made, comfortable, predictable in the handling and braking departments even when tackling the undulating roads of Hampshire, and practical enough to serve as a weekendgetaway car. “No frills, no short-term fashions” was how Mercedes-Benz described it in 1977, and that approach to the car’s design has ensured it remains popular into 2020 and beyond.

The more basic car features a clock instead of… …the rev counter found in the later example. Leather and walnut trim was a high spec interior. The seats front and back are in great condition. 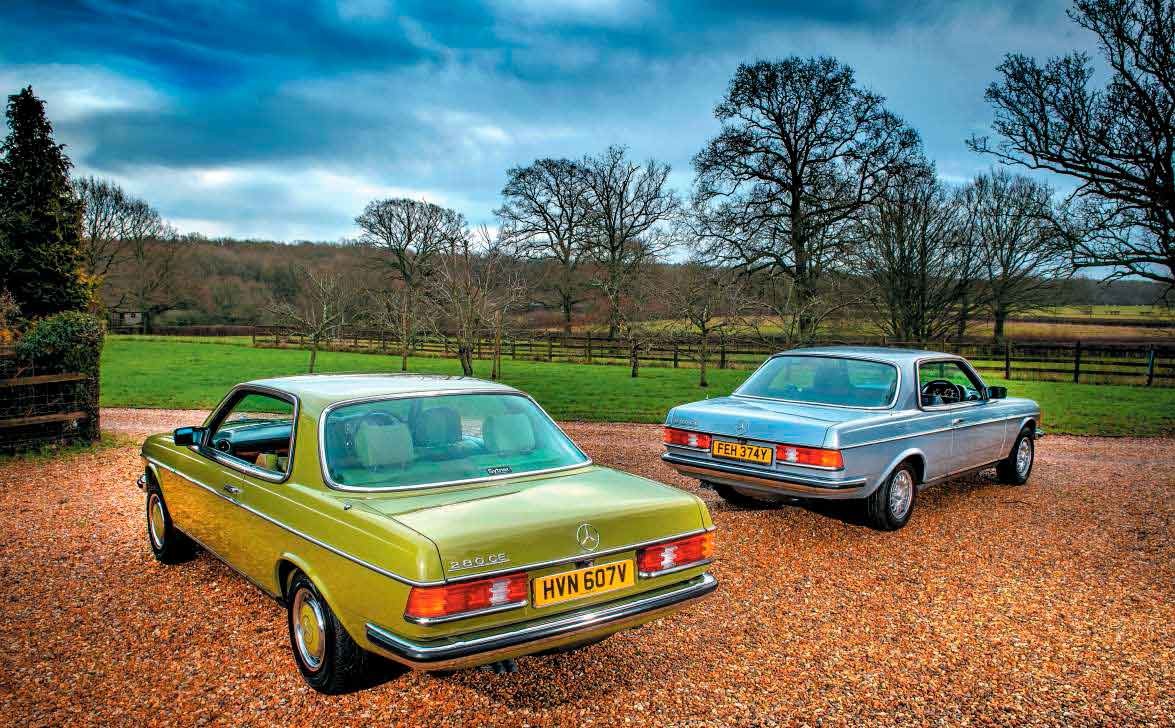 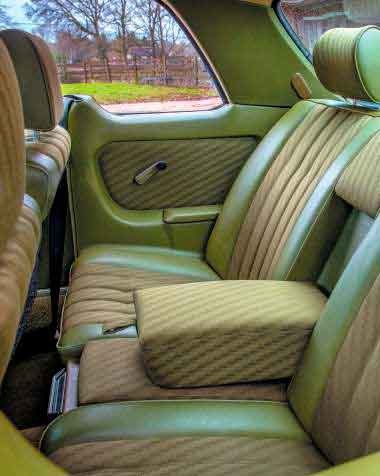 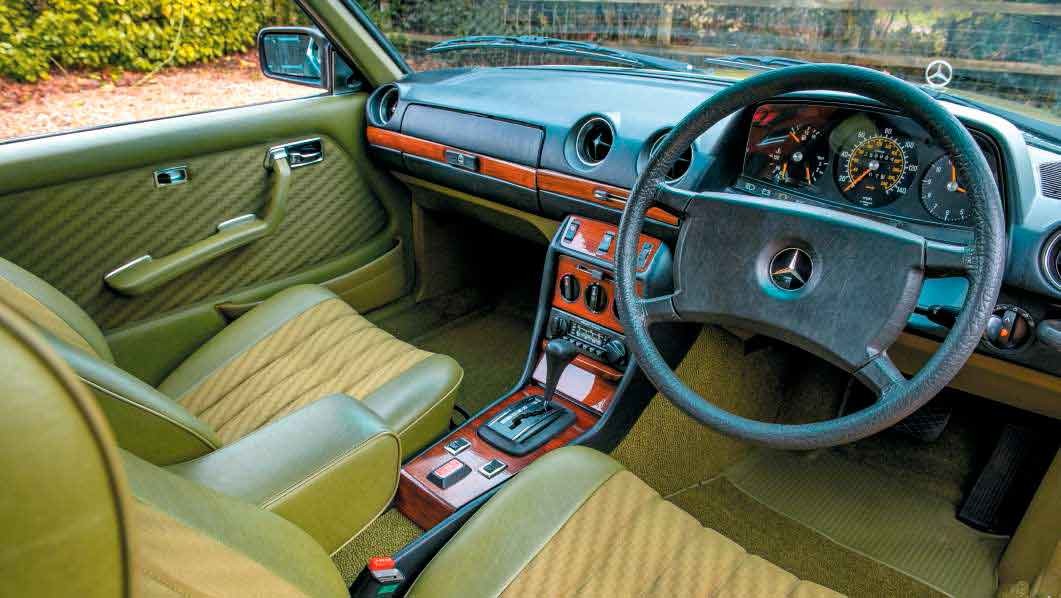 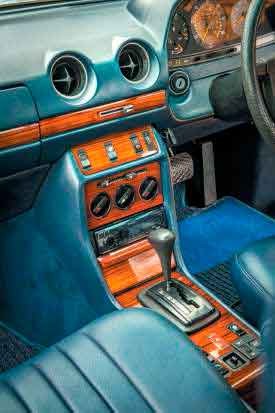 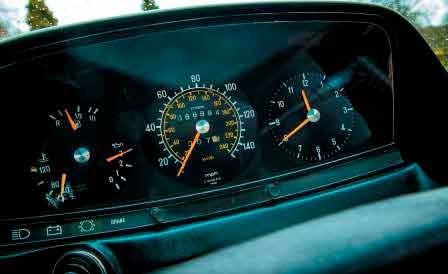 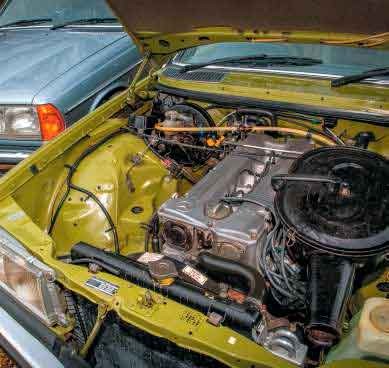 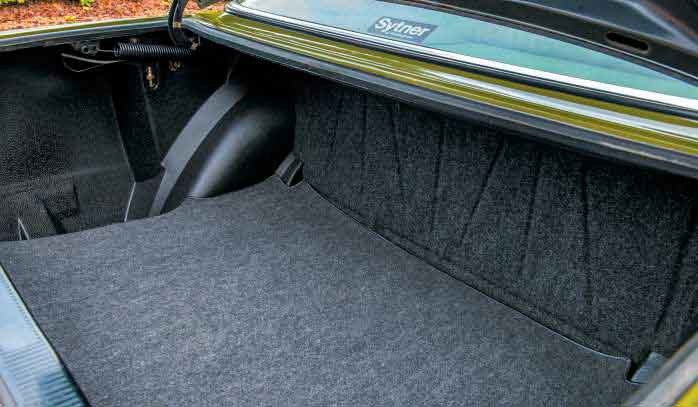 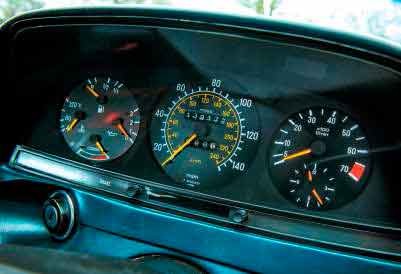 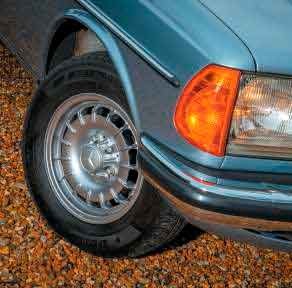 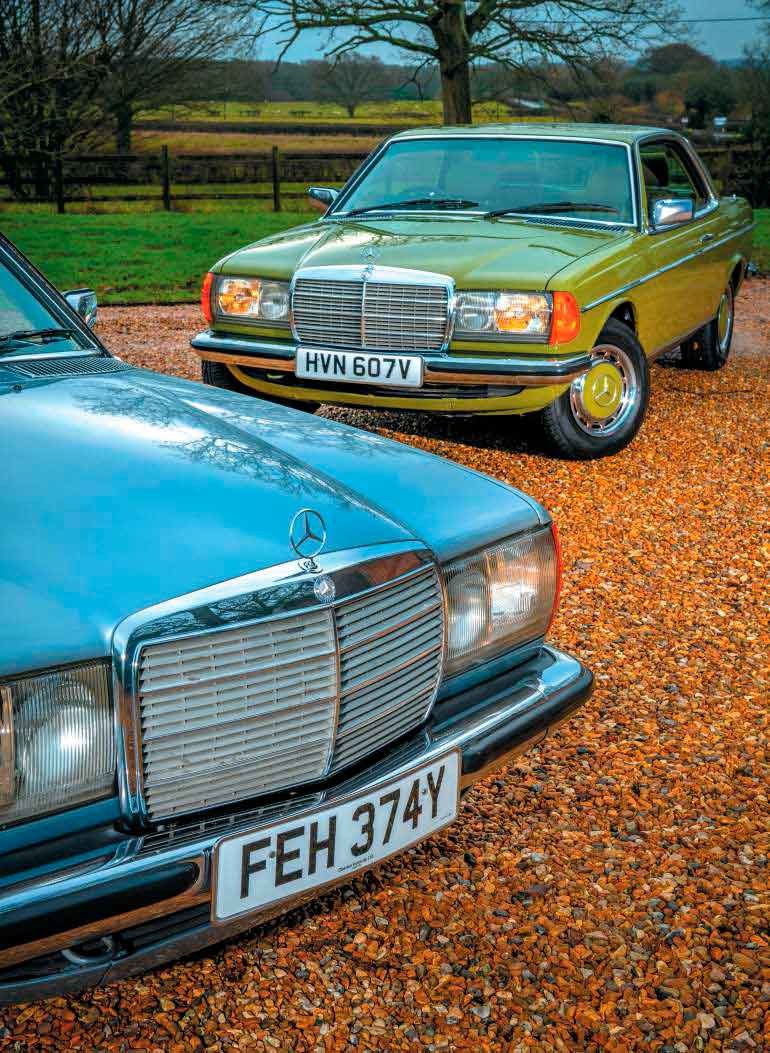 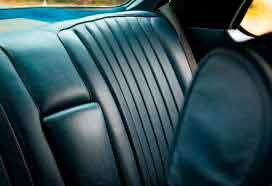 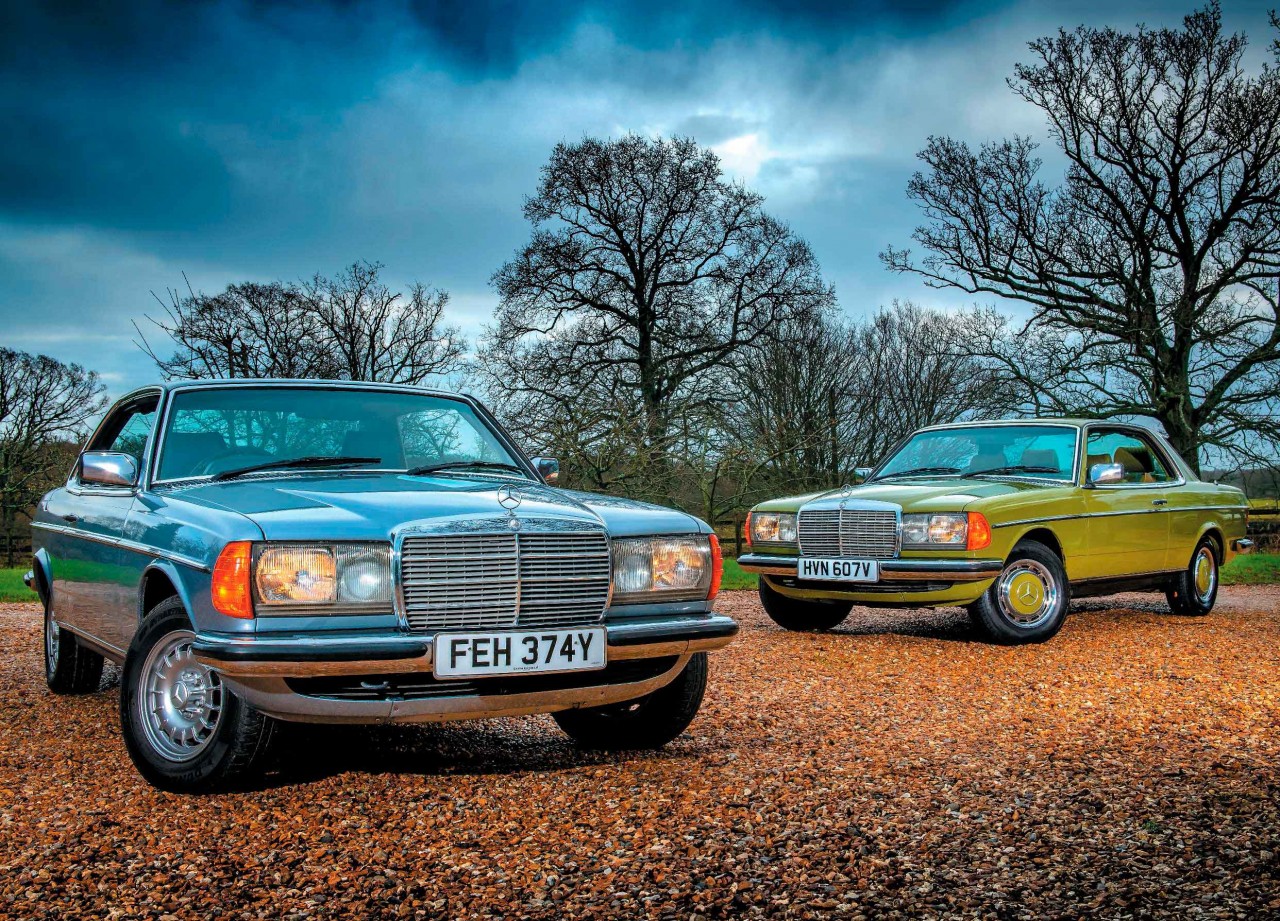 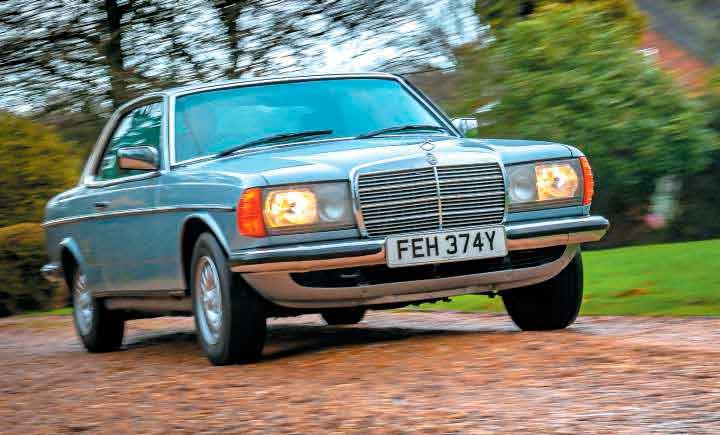 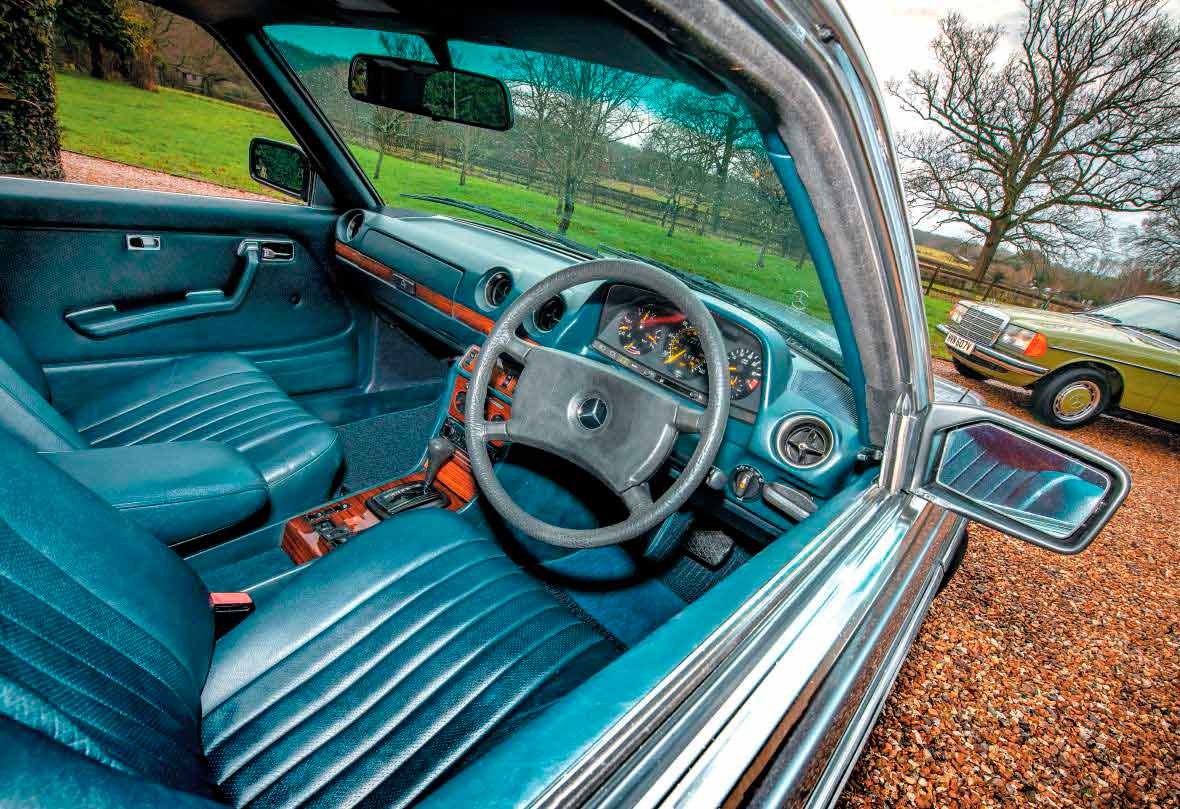 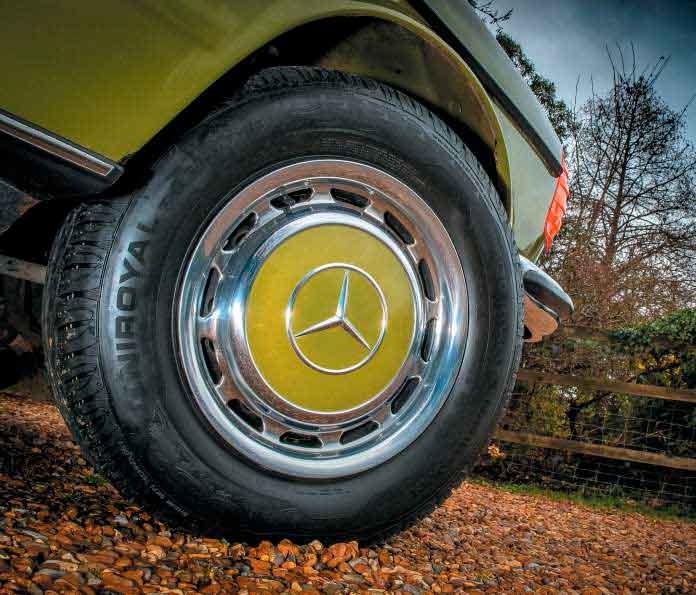 This later car features Mexican hat alloy wheels. Blue interior works well with the silver exterior. The green car is so original that it looks like new…

…and even includes this rare sunroof tool. M110 six-pot is a delightfully smooth engine. Rear interior space is small but comfortable. The matching green trim is very of the time and has aged very well. Colour coded hub caps were as good as it got before alloys arrived.