Conceived way back in 1983, when company finances were low, the Arnage, together with its Rolls- Royce Silver Seraph sister, became embroiled in an acrimonious row upon launch. As BMW and Volkswagen fought over ownership of the Rolls-Royce and Bentley marques, the Arnage was revealed to The world with a 4.4-litre Cosworth-fettled, twin-turbo BMW M62 V8 instead of the traditional L-Series V8 to which marque aficionados were accustomed. ‘They simply didn’t chug along like a Bentley should,’ said Matt Duncan, operations manager of Intro Car. When the Arnage was signed off, there was simply no money left for a new powerplant. 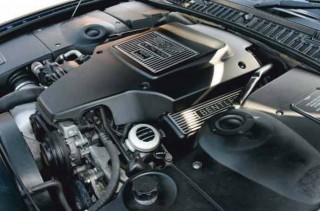 At launch, traditionalists were cool to the twin-turbo BMW engine; its origins and driving characteristics did little for Bentley fans. Munich, stung by the outcome of the bidding war with VW, refused to guarantee engine supply to a bitter rival. Amid the uncertainty, Pyms Lane dragged its 6.75-litre V8 out of retirement, stiffened the Arnage’s shell to compensate, and added a Garrett T4 turbo to up the performance ante.

Engine Let’s deal with the BMW-engined Green Label cars first: forums complain about timing chains and tensioners. Also if the 10kmile or yearly service intervals haven’t been adhered to you need to budget for this alongside the timing service (see over page). Listen to the engine at idle: if it’s sounding rough, the positive crankcase ventilation (PCV) valve might be at fault – and it’s buried beneath the turbo plumbing, which can also leak from the wastegates on higher mileage cars of all Labels. Auxiliary water pumps used for intercooling purposes can also fail; replacement is labour intensive.

2002-onward Arnages are less prone; replacing the Red Label’s Garrett T4 with a pair of Garrett T3s meant stronger gaskets. ‘They were attached with stretch bolts rather than studs,’ Matt says, ‘together with improved induction and ignition.’ A failing camshaft is another concern with 6.75-litre variants right up until 2005, when a stronger roller-bearing item came in. ‘Earlier cars have hydraulic tappets; they wear, get noisier, and compensate until they can’t cope anymore. Eventually they’re scrap and the engine has to come out.’ Replacement availability isn’t great, ‘You have to reprofile the camshaft,’ says Matt.

There are three gearboxes, all autos: the five-speed ZF 5HP30, fitted to the Green Label cars, the four-speed GM ‘Hydramatic’ 4L80-E,which equipped Bentley V8 cars from 1999-2006, and another ZF unit, this time a six-speeder, the 6HP26, standard on Arnages From September 2006 until 2009. The four-speed GM unit is the hardiest provided fluid has been changed regularly. Neither ZF ‘box should cause problems as long as their fluid has been changed between 50k and 75k miles; the more diligent owners will have the ATF dropped annually.

The lower rear wishbone bushes have the hardest time, followed by the upper and lower front ball joints. Sachs gas-filled dampers and self-levelling rear spheres have a life of five to seven years. An active ride warning light is most often caused by a connector on the rear dampers. ‘The pins on the terminals go dry; you can sort it with a squirt of WD40,’ Matt explains.

High-mile cars can suffer From rotten subframes; quality of storage is key. ‘An undercoating session is desirable,’ Matt says. Electronically, the biggest Problem at the cheaper end of the Arnage price spectrum is with immobilisers and the ECU that controls the alarm, door locks, and remote access. ‘Negotiate a good chunk of money off or walk away if the car has trouble starting due to this,’ warned Matt. ‘You want a car with a healthy immobiliser ECU and a pair of keys.’

No real issues with the hardware to report, but things get expensive if servicing has been skimped on. Every six years, Bentley specified a ‘hydraulic service’ – the priciest of all service bay work – which renews all the brake lines, reseals the calipers and replaces the pumps and air-rams in the Vee of the engine, along with all the rubber hoses. Degradation will set in rather than any particular design flaws; the cheapest Arnage Green Labels are most likely to have these problems.

The biggest fault can be neglected pollen filters; if these clog up, the stepper motors controlling the air-con and heaters can burn out – and it’s a dash or engine out job to fix. ‘The HVAC control panel itself is also expensive if it fails as it includes the control module’, revealed Matt. ‘Seat belt cables are also known to fail.’

‘A used Bentley has always offered a great deal of car for the money and the Arnage is no exception. Top Gear once said ‘‘When the cloud of dust settles this had better be the car you step from, or you’re no gentleman” – who are we to argue with that?’

OWNING – I BOUGHT ONE MARK MCMULLAN

Northern Ireland-based Mark bought a 2004 Bentley Arnage T seven years ago. ‘The Arnage is the last of the real British cars where emissions and fuel economy didn’t matter,’ he said. ‘Mine’s got 450bhp and immense torque, but the earlier four-speed automatic, despite the facelift.’ The T shares garage space with another Bentley: a Flying Spur. ‘The latter has nothing on it for lifestyle or looks,’ Mark says. ‘Seek one out with a good history. Beware of faulty passenger seat sensors and cars left standing – they’ll flatten both their batteries if they’re not kept on trickle,’ he said.

‘We don’t find many people complaining about the performance,’ Matt Duncan says. ‘Instead, uprating specific components helps keep many an Arnage on the road.’

IntroCar, under its Flying Spares and Prestige Parts banners, sell polyurethane replacements for those vulnerable rear wishbone bushes. ‘We have an Arnage Red Label we use as a running test bed; we manufacture parts that are no longer available from a main dealer. Flying Spares also buy up new old stock items from vendors. Parts like anti-roll bars will be cheaper and stronger than their OEM equivalents.’

American forums like 6speedonline have also cross-referenced part number equivalents for commonly replaced spares like ball-joints and engine componentry; while hardly a DIY prospect, the canny buyer who wants to supply a specialist with their own parts can shop around and save money.

Quote based on a self-employed 39-year-old male with no points, living in

Peterborough, Cambs. Car is garaged and limited to 3000 miles per year. Call 01480 587018 or visit lancasterinsurance.co.uk for your quote.*

*Disclaimer: Policy benefits, features and discounts offered may vary between insurance schemes or cover selected and are subject to underwriting criteria. An additional charge may be payable.

Upgraded wishbone bushes are available. Active ride warning light is easily fixed. Clogged pollen filters can be a pain. All boxes reliable if well maintained. It’s a heavy car so shocks can fail.

Can you get more car for lessmoney? The Red Label Rolls-Royce engine – handsome beast, no?