Back in the savage winter of 2010 and 2011, I was a salesman at a BMW main dealer and I took a 2002 Audi A4 2.0FSI in part exchange against a BMW 318Ci Coupé E46, some three years newer. The week after the customer battled his way from Cardiff to Chesterfield to do the deal, I drove the BMW down to a dealership in Cardiff to do the handover – the snow had all but gone by then. Setting off from Cardiff at just after 12.00 pm, I drove the A4 down to Seaton in Devon before heading all the way back up north, taking the scenic route back through Somerset and finally the M5 and various other motorways. 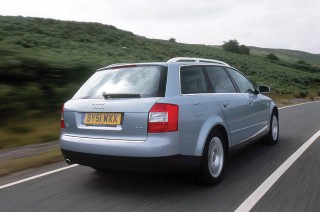 It was then that it struck me that this second generation A4 was a really nice car, and I certainly bonded with it, thinking that I would gladly buy one myself. Everything about it was right, despite most cars having at least one annoying feature. The snow returned with a vengeance shortly after, but even without the benefit of quattro assistance, the front-drive A4, on a set of well treaded Continentals, became my ‘company car’ for a month (much to the hilarity of my colleagues!) because anything BMW and rear-drive was just useless. It was certainly a sad day when the A4 was loaded onto a transporter and sent to auction, as I had formed a deep respect for this solidly built and utterly competent car.

The original A4 had been a huge hit for Audi, and the second generation was even better – I rate it as one of the best used car buys around. The B6 Audi A4 began production in late 2000. Perfected by Peter Schreyer, the B6’s styling had been finalised in 1997 and was heavily influenced by the A6. Volkswagen and Audi love numbers: the B6 model A4 was internally coded 8E, and was built on the all-new Audi PL46 platform.

V6 models were also available but, as with the previous generation A4, they were always slow sellers. The 170 PS 2.4 and 220 PS 3.0 versions certainly had plenty of performance and the 3.0 was only available as a quattro, while the 1.8, 2.0 and 2.4 were available with the Multitronic CVT autobox. Trim levels were SE, Sport and, from 2003, S line.

Of more interest to most buyers were the diesels. Audi has done more to introduce diesels into the prestige market than anyone else, and the 1.9 TDI had become something of a legend, now featuring PD technology. This was introduced in December 2000 as a 130 PS model, but Audi added lower-powered models later on, the 100 PS in May 2001, and the 115 PS in April 2004. All three are great cars, and some prefer the lowerpowered versions which give slightly better fuel economy. Six-speed gearboxes were fitted from June 2002 on the 130 PS cars and, from January 2002, a 130 PS quattro version was launched in both SE and Sport trim levels.

December 2000 had seen the introduction of the 2.5 TDI quattro with 180 PS and with six-ratio manual gearbox – possibly the ultimate all-round A4. This was joined in 2001 by a 163 PS version.

After only four years, the B6 was replaced by the B7. This new model with the now-familiar Audi ‘beard’ grille was in fact a clever revamp of the B6. Technical improvements included revised steering geometry, and the TFSI fuel injection and engine management system – but more on that another time. This B7 itself became the SEAT Exeo in 2008, and this model has only just gone out of production, replaced by the new Toledo. As a used car, the B6 model A4 makes as much sense as it did when new.

Starting with the petrol engines, the four-cylinder units are all distant relatives of the EA827 unit that powered those first Audi 80s in 1972, as are the 1.9 diesels. The 1.6 with 100 PS is no fireball and few were sold. There’s nothing wrong with them, however, and a good one is a decent car to drive. 1.8T or 2.0? There’s no doubt that the 1.8T goes very well, with a nice bit of turbo shove. The 136 PS 2.0 engine is a bit lost, but again don’t dismiss a nice clean one. The 2.0 FSI with 150 PS goes well and returns very creditable economy. Like the others, it is known for coil pack problems, but these days new coil packs are so cheap to buy and easy to fit that it’s almost worth keeping a spare in the glovebox.

These engines can all suffer from neglected oil changes and many can sound quite harsh. The problem is the oil pick-up strainer becoming clogged with old oil residue and the only way to prevent this is to change the oil regularly, using semi or fully synthetic oil and changing it every 10,000 miles or so.

Dropping the sump to clean out both the sump and the strainer is probably worth doing, but avoid engine flush as this can dislodge crud that can cause the oil pressure valve in the pump to stick.

These engines all have cambelts that should be replaced at the correct intervals along with the tensioner rollers and the water pump. Contitech (part of Continental tyres) do excellent quality belt kits but, on engines with water pumps that are part of the cambelt tension, we would use a genuine Audi water pump.

As with the previous A4, cambelt changes require the front of the car to be pulled forward on the special screw-in studs that allow the complete front panel with lamps to be drawn forward.

A cambelt change on a V6 isn’t vastly more expensive, but you’re still looking at around £350 with parts.

The PD diesels are great engines and don’t suffer the oil pump problems of the later 2.0 TDI. Most, however, have now covered a lot of miles and you need to weigh up the potential costs as the 10-12 mpg difference between a 1.9 TDI and a 2.0 FSI can be quickly absorbed by an injector replacement or turbo failure. If anything, diesels need more care than petrols and, and you need to make sure that you do not just put any oil in a PD diesel – it needs the correct grade. Volkswagen sells Quantum LongLife III 507.00, and Halfords also sell a PD specific oil.

Coolant leaks on the 1.8T will probably be the hose to cylinder head flange on the back of the head – you will need to replace the flange, which is not a pleasant job.

The Multitronic autobox is worth avoiding. By 80,000 miles it can be showing the symptoms of impending doom such as juddering on take-off, and they’re just a gamble at this age. The regular manual gearboxes are very longlived and last even longer if the oil for the gearbox and diff is changed every 50,000 miles.

Suspension, steering and brakes are very similar to the previous A4 in terms of what can wear out and, as before, it will be bushes, balljoints and CV joints. The quattro models always have the extra fear factor, but they’re generally pretty good with only clutch replacement being the expensive bit. On all cars, ABS modules can fail and a brand-new Bosch unit is far cheaper from a motor factors such as Andrew Page – always check the new Bosch price before buying secondhand. Power steering whine will be a low fluid level, but don’t over-fill it!

In terms of body and trim, the B6 is about as good as the B5 was. You can get the occasional rusty front arch but it’s not as common as it is on the A6 and the B5 Passat. Window regulators can break, but this is mainly due to the glass becoming stiff in the vertical felt runners – some spray grease now and again is a good idea.

Non-working rear windows can often be a failed window master switch, and a misbehaving sunroof will also be a switch problem. You can often take them apart and clean up the contacts, but a new switch isn’t dear. A similar issue can affect the boot latch that will not stay shut. This can either be the small spring inside the unit or the electric solenoid, and a good used unit is the best plan.

In terms of prices, the B6 is now getting very cheap, but cheap isn’t always good and a really nice B5 is better than a ropey B6. A quick scour of Autotrader revealed that £1,000 would buy a 2003 2.0 FSI manual saloon with 157,000 miles, no history to speak of and an interior in need of a serious valeting job.

‘In terms of prices, the B6 is now getting very cheap, but cheap isn’t always good and a really nice B5 is better than a ropey B6…’

‘The original A4 had been a huge hit for Audi, and the second generation was even better – I rate it as one of the best used car buys around…’