To a generation brought up on Miami Vice and Bonnie Tyler, the Testarossa is the Ferrari to beat them all. Ferrari Testarossa posters almost single-handedly kept Athena shops afloat in the 1980s, and now the kids who bought those glossy A3 prints have the wherewithal to buy the real thing. Ferrari’s most extrovert car of the 1980s is the latest Maranello horse to go on the rampage in the marketplace. Wild strakes, pop-up headlamps and a rear end wider than the Red Sea – the Testarossa was certainly striking. This was the car that truly embodied the zeitgeist of 1980s excess, while retaining that sense of proportion for which Pininfarina was famous.

It’s hard to underestimate the impact its bold design effected: this was the automotive equivalent of Ewing shoulder pads, of a gated snare-drum power ballad. Often dismissed as louche and over-the-top, the Testarossa doesn’t feel so garish in retrospect (especially alongside, say, a LaFerrari). This is a proper Ferrari created when Enzo was still alive, and a proper supercar too, with its glorious flat-12 engine and manual-only transmission. And it’s more robust than you might think.

The familiar 4.9-litre fuel-injected flat-12 engine from the Berlinetta Boxer now produced 390bhp, some 50bhp more than the BB512i. Compared to the Boxer, the Testarossa was a longer and wider car, offering extra cabin and boot space.

As production progressed, the design evolved subtly. In 1988, twin door mirrors arrived, in contrast to the ‘monospecchio’ original single mirror, while bolt-on wheels replaced the original spin-offs. The 512 TR of 1991 still didn’t change the recipe too drastically. The engine/transaxle were mounted lower down, to the benefit of handling, there was a stronger diff and an extra 38bhp thanks to a better block, reshaped cylinder heads, Bosch Motronic M2.7 and a higher 10.1:1 compression ratio. The wheel size grew from 16in to 18in, and the front end and engine cover were redesigned along Ferrari 355 lines, as was the interior. Even the final F512 M of 1994-1996 had only minor tweaks: fixed headlights, front NACA ducts, round taillights, split-rim wheels and another mild boost in power.

There’s real purpose to the cabin design, with bright orange dial calibrations leaping out of an all-black slab of a dashboard. The seating position feels a little odd, especially if you’re tall, but it’s much more comfortable than earlier mid-engined Ferraris.

The Bosch injection ensures a clean take-off straight from the off with none of the spluttering of earlier carb-fed flat-12s. It’s actually very easy to drive: silky, refined, torquey, long-legged and flexible. When you hit 4500rpm, the engine starts to wail like a 1980s F1 car, and is able to hit 6800rpm, at which point it sounds like a banshee, especially if you have an aftermarket exhaust fitted. Snicking through the gears in that metal H-gate reminds you – at least once it’s got past its cold-start notchiness – what the current generation of semi-auto drivers are missing.

For the record, the Testarossa was clocked at 180mph in independent road tests (the F512 M nudged the 200mph mark), and while its 0-62mph time was claimed at 5.8 seconds, road testers got it to accelerate even quicker. 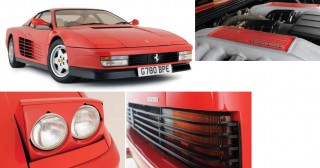 Threading the ‘redhead’ along a twisty road, it feels like you’re driving something the width of a London bus, but in fact the Testarossa behaves very well. On its 225/50 ZR16 tyres, there’s near-flat cornering and plenty of grip. The steering is weighty (especially at low speeds) and very precise, but does perhaps lack a certain amount of feel compared to some Ferraris.

The later 512 TR and F512 M are better balanced handlers thanks to their lower powertrain placement. One last word: the brakes aren’t quite as potent as you’d expect given the power available and tend to get a bit spongy after repeated use.

People are (perhaps rightly) scared of Ferrari’s flat-12 engine as an ownership challenge. If well cared for, it can be robust, but if anything goes wrong, rebuilds are wince-inducingly expensive. It’s vital you have a specialist inspect the car to check it’s all OK. Ferrari redesigned the early Testarossa’s gaskets and ignition drive to solve oil leakage issues. Some smoke from the exhausts on start-up is normal but there should be no white smoke once you’re on the road. Replacing the exhaust costs around £1000. 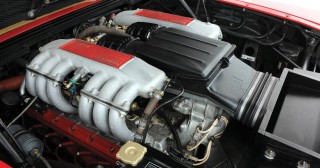 Look for originality in the engine bay, such as nonmodified filter boxes and – although rare these days – Bakelite-type bulb holders (which crack). Note that engine bays are rarely clean as the rear wheels are not enclosed.

Check that the gearbox is working sweetly with no synchromesh issues. As with engines, gearbox rebuilds are very expensive. The original-spec AP twin-plate clutch can last a long time but abuse can shorten that considerably; replacement could set you back as much as £2000.

If the Testarossa has a weak link, it’s the transaxle, which is really insufficiently strong for the engine output. The differential in particular is problematic and prone to destroying itself. The later 512 TR has a stronger diff.

The bodywork is mostly aluminium (the roof and doors are steel) over a steel frame. Corrosion is rarely an issue but the front bumper will almost certainly have been repainted at some point, which is not necessarily a bad sign. But you need to look for evidence of chassis damage by opening the front lid, removing the carpet and having a very thorough inspection. Original factory paint (almost orange-peely in texture) here is a good sign, as is the original foam insulation under the engine lid and front boot lid.

Hand-beaten body panels are, as one might imagine, very expensive to repair or replace. The iconic strakes are all hand-made and very fragile, so check they all align correctly.

Sergio Pininfarina famously said the Testarossa was designed as a red car, but most colours suit it. There are some odd colours like gold and plum out there; arguably black doesn’t look great as it loses the design details.

Original wheels are what you want. Look to see how crisp the lettering is on the wheels to see how much they’ve been refurbished. The single-bolt centre-lock wheels on early cars need to be tightened correctly. Because they are metric, tyres for these are now very hard to find.

The double wishbone/coil-over suspension is fairly robust, and complete suspension bush kits cost around £250 for the front end and £500 for the rear. There are six dampers to keep an eye on, too.

Front brake discs for bolt-on wheel Testarossas are about twice the price of knock-on discs, at around £380 each; rear discs for all models are around £200 each. For the later 512 TR and M models, front discs are £660 each. If you want to upgrade to larger brakes on early cars, you’ll need to fit larger wheels.

Originality is key in the cabin – the steering wheel (ideally with clear white stitching), gear lever and dials should all be original. Any change of clocks needs to be properly documented.

Dashboards that have been exposed to sunlight can pull and shrink, generally this is a sign of how hard a life the car has led. The carpets are hardy. Later 512 TRs have 355-style ‘sticky’ switches that notoriously become gooey as their coating breaks down; replacements are hard to find.

Seat bolsters do wear, particularly in light colours such as Crema, but Connolising the seats (at around £700 a pair) normally does wonders. It’s important to have the full set of tools and booklets with the car – replacements cost around £2500 and £1500 respectively.

As with any older Ferrari, check that all the electrics work. The fuse panel really isn’t up to the task of handling the systems and many cars have had aftermarket replacements.

There’s no escaping the fact that ongoing costs for the Testarossa are high. An annual/6250-mile service is essential (around £750) but the main maintenance bugbear is cambelts. The engine needs to be removed to do this, and should ideally be done every 15,000 miles or every three to four years. It’s a big job, even though the engine/transaxle comes out on a subframe. Budget up to £2000 for a cambelt change. Even fluids are pricey to change if you stick to topquality lubricants (which you should do).

The Testarossa family sold near enough 10,000 examples, so there’s a big choice of cars out there. Initially this kept prices relatively affordable, but that has changed dramatically now, and prices are still in a state of flux. 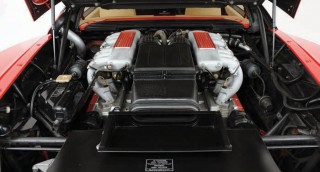 RHD cars are actually rare (fewer than 500 Testarossas). This has led to higher prices for RHD cars – typically £150-£180k for a good one – which in turn has sucked in a rush of LHD cars on to the market at notably lower prices. Spencer Herbert at Ferrari specialist Barkaways says: “These LHD cars will sell quickly, leaving far fewer cars on the market, so the potential is for RHD prices in particular to go even higher. We could see £200k within two years.”