Paul Bracqs styling masterpiece, the Pagoda-roof W113 SL was built to exceptional standards, from cast-aluminium door shells to individually numbered alloy bonnet, bootlid, hood cover and door skins. Way ahead of its time in the combination of sporting performance and touring comfort that it offers, it seems delicate but is a masterful endurance rally car – as proven by winning the gruelling 1964 Spa-Sofia-Liège.

All three engines give a near-identical top speed, though the 250 and 280 have significantly more torque than the 230SL. The 280 also has softer seats and suspension and 90% were sold with an excellent four-speed automatic, whereas 75% of 230s were manual. The W113 was always glamorous and expensive (twice as much as a 4.2 E-type), with Charlton Heston and John Lennon among star owners in period. John Travolta, David Coulthard, Jason Orange and Kate Moss have added more recent flair to the model.

Most were sold with both hard- and soft-tops, but some were soft-top only. Beware the 230SL ‘California Coupé’ with removable hardtop but the hood well replaced by a drop-down bench, giving a 2+2 configuration. Though rare these are not sought-after, a soft-top being useful in case of sudden showers. This should not be confused with the optional side-facing “jump seat” available for cars equipped with the hood, and fitted to the 250SL in our photographs.

As values rise, US-market cars are returning; they make good projects if rust-free from a dry state, but factor in the cost of upgrading to Euro spec. American cars had separate sealed-beam headlamps (with flashing disconnected), rubbertipped overriders, lower axle ratio, milder cam (from late ’68), headrests, side wing reflectors and hazard warning lights. There were data/emissions plates in the door frame, but no mirror in the passenger’s sunvisor and less chrome trim, while many had aircon. RHD conversion is not viable. Inspect the condition of all rubber seals.

Solidly built with all-welded panels, a rotten SL is costly to repair properly, so there are many superficially shiny ‘restored’ cars around. Look for consistent panel gaps, smooth spot-welds on the front outer-to-inner wings and an unfilled panel join seam below the headlights. Brightwork is pricey, too, so ensure it’s all present and undamaged – likewise the valuable toolkit and jack. White with black top was the combination of choice when new; silver is now most favoured.

Though durable if well maintained, the engines are not bombproof and should be carefully inspected. Blue smoke on acceleration is likely to be hardened/worn valve stem seals. Expect near-instant starting; neglect or lack of use can cause rust in the pipework to block injectors. Dirty oil can damage pump: it costs £1000+ to rebuild.

M-B Tex is durable but horsehair stuffing can disintegrate and door cards warp; leather is not a desirable upgrade. Check screen-base wood for water damage.

Head gasket can fail, notably on cars idle for long periods: a misfire or overheating are warning signs. It will soon recur if not properly repaired by an M-B specialist.

Not all W113s were sold with a hardtop, but each was numbered and matched to the car originally. Adding a missing hardor soft-top puts £5000-plus on the value.

7 Rear base of hardtop (right)

8 Chassis rails, ahead of axle 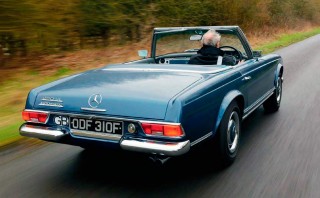 No more power was claimed for the 250 than the 230, but its useful band was much wider with a substantial torque boost. Corrosion inhibitor in the coolant is vital to avoid the system silting up, causing overheating and head-gasket failure. Check the oil level, listen for rattles and, ideally, avoid stainless exhausts, which sound tinny compared to the M-B mild steel type.

Automatic suits 280s and 250s, and Mercedes’ four-speed manual transmission is a gem, though for competition and relaxed cruising the rare ZF five-speed is the ultimate and boosts value. The fluid-flywheel, four-speed auto is no slower-accelerating than the manual – test for slipping or jerky changes and inspect the colour of the oil, which should be red, not black or brown. Power-assisted steering, which came with a quicker ratio, is a plus and commands a price premium.

Taller final drives can be fitted, but it is an expensive job and best suited to tuned 250/280 engines – it’s not a cheap unit to uprate, either.

Check that the heater and all the electrics work correctly, because issues are common and usually dear to sort. Look as far as you can see inside the fuel filler for rust – tanks can corrode in cars that have stood for a long while; a repro item is £500.

Clever soft-top design folds out of sight, hidden under a cover, and doesn’t affect vision with the Pagoda roof in place. Beautifully crafted interior with signature large wheel. Paul Bracq styling was barely altered over the years and looks just as elegant now as it ever did.

“I liked the looks and understood that Pagodas were reliable, and practical for European tours. It has always started first time except when the points failed; it now has electronic ignition.

“It cruises all day at 80mph with the factory wind deflector, but is blustery any faster than that. I will drive at 110mph on the autobahn, but it gets thirsty! I get 20-22mpg, depending on the speed. “The car has more than quadrupled in value, but that doesn’t stop me driving it all year round. I intend to keep it as long as I’m allowed to drive.”

The E-type sports car gradually became more of an all-rounder, with comfier seats, 2+2 and auto options. It remained much faster than the SL, but maybe more tiring on a long trip.

With 150bhp from a 2.8 V6 in its final form, the GT/Cabrio was stylish and rapid. A transaxle and de Dion back end gave it confident handling, plus it was a superb, if rot-prone, tourer.

Against Cosmetics; one to improve at home

This rare manual 280SL W113 came to the UK from Japan in 2014. It’s not clear where it was first supplied to because it has Federal side markers and Euro headlights. It’s solid, having had £1000-worth of new metal in the floors and front inner arches. It’s had patches to the rear chassis legs, but the sills look good. The boot floor was done in the past.

Door fit is pretty good and the front wings are probably replacements because the swage lines inboard of the headlights have gone. The chrome is smart and paint ‘okay’: presentable from 10 paces, but with a few small blemishes. The hardtop is sound and so, we are told, is the hood (it was starting to rain and we didn’t want to lift the roof). The motor is dusty and the dark, emulsified oil needs changing, but its coolant is green. The add-on aircon doesn’t work, and needs sorting: Jubilee clips on pipes are no longer acceptable.

Inside, the dash is excellent, the driver’s seat vinyl has a split and a hole, plus the carpets are a bit tired. It fires easily with no nasty noises and drives quite well, showing full-deflection oil pressure and 170ºF when up to temperature. There’s a little blue smoke on take-off, but that could be because it wasn’t fully warm and it had been standing. The brakes pull up straight and there’s no steering play, but the four-speed gearbox has a wide throw, suggesting tired bushes. The exhaust clatters, and has worn through the rear skirt, although this should be fixed before sale.

Tidy 280 has a few chips, decent tyres and full MoT on sale Nice dash and gauges; MB-Tex has a couple of minor flaws Straight-six could do with steam clean and some fresh oil.

Buy the best you can afford and don’t ignore the sportier manual 230: top examples of each model command similar prices, with full spec being most important. A good Pagoda will reward with decades of service, but beware the tarted-up rusty cars hidden behind new sill covers and badly fitted front wings, neglected running gear and missing hardtop.