Mercedes brought the SL bang up to date in 1989, with sharp Bruno Sacco styling and a technology overload. Built over 12 years with straight-six, V6, V8 and V12 engine options ranging from 2.8 to 7.3 litres, the R129 came in many forms, all of which have their fans. The car was based on a shortened W124 platform, which provided multi-link rear suspension and optional electronic adaptive damping. A built-in, automatically-raised rollover bar was a distinctive safety feature. The smart hardtop was heavy – a two-man job to remove, especially in later Panoramic (glass-top) form – difficult to store and easily scratched, but it looked great: make sure it’s still with the car. Rear-seat space is limited; front-seat occupants will have to sacrifice legroom to squeeze adults in the back.

During production, Mercedes changed from the 24-valve, twin-cam M104 straight-six and 32-valve quad-cam M119 V8 to the 18-valve single-cam-per-bank V6 and 24-valve quad-cam M113 in ’1998. Some power outputs were marginally down, making the 1995-’1998 five-speed auto SL500s the most sought-after of the standard cars. The ultimate cruiser is the 6-litre V12 600 with 389bhp, while the top sporting models are the AMGs: all are rare, but you may find a bored-out 6-litre V8 AMG SL60. AMG chose the V8 because it was lighter and could be made to handle better. The V12 600SL was more tuned to US motoring, though a sports-car character shone through when it was pushed hard. Unusually, though corrosion is not a big problem on these SLs, later cars are more prone; there are dark mutterings that, after merging with Chrysler, Mercedes was cutting costs…

All are laden with electric and electronic trickery, increasingly so on later and higher-spec models. It’s all wonderful when it works, but inevitably age and damp wreak havoc with rarely-used contacts – and when those are inside sealed units, rectification gets costly; 1993-’1995 cars also suffer from degradation of the wiring harness in the engine bay. Try to find a car with a sheaf of bills for keeping the details working, as well as regular servicing: there’s a big variation in prices between cars with dubious vs. impeccable history, because of the huge potential cost of bringing a neglected car up to standard. If you fancy an AMG, be prepared to pay double or more than the price of an equivalent SL500.

ACCIDENT DAMAGE Check behind the bumper

WHEELARCHES Look out for rust, especially in the fronts where they meet the bumper

WINGS Check inners and behind side grilles

SUSPENSION Watch out for wear and corrosion, both front and rear

ELECTRICAL COMPONENTS Do they all work?

HARD/SOFT-TOPS Look for hardtop corrosion, especially at the base of the B-posts, and check the soft-top’s condition and operation 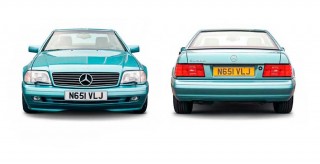 Look for smooth automatic gearchanges, without delays, slipping or jerkiness, and check the fluid is clean and not burnt. Manual ’boxes shouldn’t be notchy or vague. A neglected interior indicates a neglected car, though Nappa leather wears quickly. Check all electrics work, and for cracked sunvisors or a faded heater panel display.

Full service history is vital. The V8 engines will go on for ever if serviced, but listen out for rattly cams and lifters. V12 and 300-24 head gaskets can fail (c£1500 to replace on the ‘six’, much more on a V12), and it’s wise to replace the water pump on straight-sixes if it hasn’t been done. Check for oil leaks, especially on V12 units.

A failed condenser is the most common cause of ineffective air-con. It’s vital that correct coolant has been used; ‘sixes’ run hot when fan couplings fail.

Automatic roll-over protection can also be raised on a button. Test all electrics because there’s a lot that can go wrong: seats, headrests, hardtop release.

Look for wheels’ spec and corrosion, tyre age and quality, and worn/seized brakes: there were multiple spec variations in brake size and calipers. 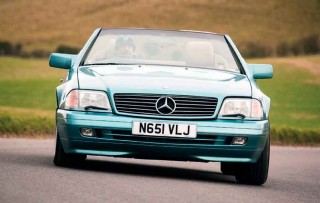 All R129s should feel lively and under-stressed on the road, especially V8s and V12s. The sturdy V8s are the most dependable, usually suffering only minor ailments. An M119 sounding tappety is likely to need new plastic cam oilers (c£600 to replace all 16), while poor hot starting on later M113s is usually a crank sensor: an easy fix.

Check that the ’box shifts smoothly into all gears (including reverse); the five-speed auto on ‘sixes’ can have issues getting fifth. Confirm that the oil and filter have been changed at least every 40,000 miles; for a while they were ‘sealed for life’ until Mercedes realised that was a mistake… The suspension and steering should operate quietly and comfortably, with no knocks or sloppiness. It’s a heavy car, so dampers, bushes, suspension top mounts and steering box – and especially the idler – do wear, and springs break.

They’re hugely complex: the first cars had a remote-control rear-view mirror and auto-locking door pockets, dropped in 1995. All had an auto-locking centre console and boot storage compartments, and ’1997-on cars have three-way programmable garage door transmitters on the rear-view mirror, plus rain-sensing wipers. A separate electric water pump feeds the heater (and fails). ADS active damping was optional: it’s great, but needs an expert to sort it if faulty. Every aspect of the seats adjusts electrically (check heat pads, too), and hardtops are released and lifted electrically – impressive if it works! A weak battery can cause stray warning lights.

Like most SLs, the R129 errs on the side of comfort rather than sportiness, but is still an accomplished machine; all are quick, but V8s particularly effortless. 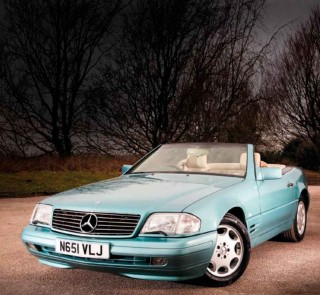 I looked for an M119, but there weren’t many to choose from. I bought this one at the bottom of the market, 61/2 years ago: it had an electrical issue where you’d switch one item on and it would cut another, plus it needed a plug change; it had 11 past owners but had a good service history and I got it for £6500. It’s Tanzanite Blue with Panoramic roof and Albali wheels – it’s totally original and was a really good buy.

“From the R129 forum, I learned that the electrical problem was a burnt contact on the ignition switch – easily sorted. I service it myself: it’s a hands-on car. I had to change a headlamp wiper motor and got the parts from eBay. I was going to trade it in for an SL55, but I didn’t feel at home in one, so I’ve decided to keep it.”

Great parts supply makes the XJS a tempting alternative, but there’s still a lot to go wrong and they are prone to rust, too. Buy on condition and history. Price now £8-30,000 (convertible only)

Oddball front-drive V8 answer to the SL was Pininfarina-bodied: shells were flown to Detroit for finishing. In LHD only, and just a handful of cars came to Europe. Price now £5-15,000

Asking prices vary widely and often illogically, so check very carefully which model you want, drive a few and focus relentlessly on condition, specification and – above all – full, caring history. Or buy a cheap but clean one and keep thousands in your back pocket for when it goes wrong: it will. Low mileage is not always good, especially if recent use has been minimal.

FOR + Superbly built, attractive and practical, with effortless performance

AGAINST – Biased more towards comfort than sporting handling and extremely complex, so there’s lots to go wrong – plus many have now suffered years of limited maintenance

Against No air-con (some would say that’s a plus)

This tidy, fairly low mileage R129 300SL-24 is nicely but slightly oddly specced, with adaptive dampers, heated/memory seats, cruise control and headlamp wash/wipe, but no air-con. It’s clearly been well kept, with a dozen service stamps (the last at 50,805 miles) and sundry bills, including £1659 for damper work in 2014, a later £4268 ticket from Silchester and various bits of paint. It presents well, with unscuffed body plastics and alloys, and the expensive front grille smart. The tyres are 2017 Dunlop SP Sport Maxx up front with plenty of tread, older Dunlops at the back, and a Uniroyal 550 (maybe the original) on the spare. The exhaust is the factory item.

Inside, the leather, dash plastics and veneers are good, and there are a couple of minute burns on the carpet and door. The toolkit and warning triangle are present, but not the first-aid kit.

It starts instantly with a little air pump noise (normal) that soon quietens. Everything works, the auto ’box is responsive, it tracks straight and the brakes are smooth, with a very solid feel. Oil pressure is the expected max 3bar when running, dropping to 2bar on tickover, and temperature is steady at 80ºC. It will be sold serviced, with original books, two remote keys and a new MoT.