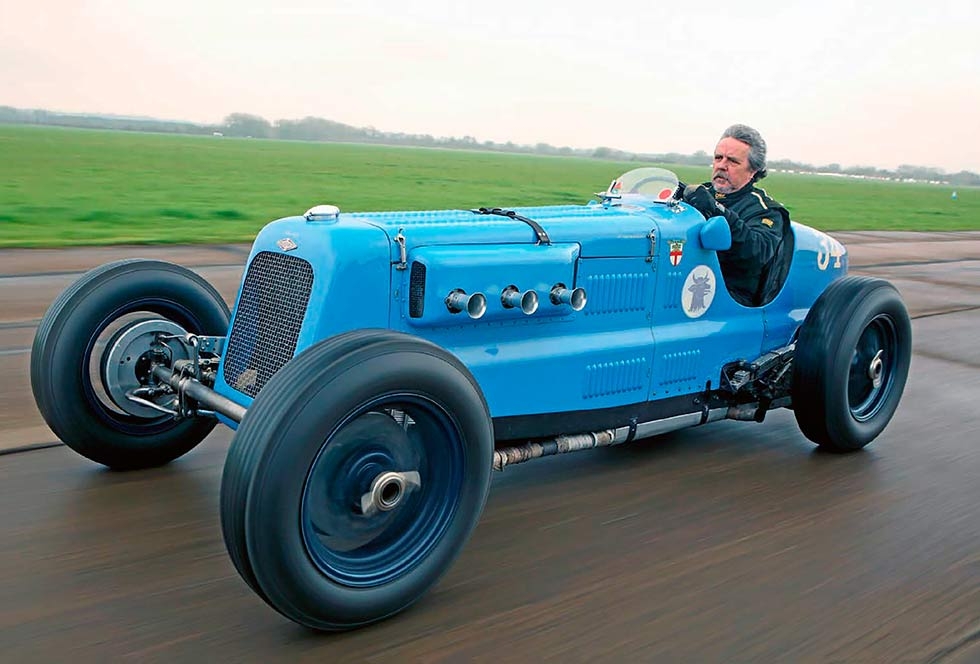 Special Addition. Flywheel Festival is well-known for its vintage specials, and this much-campaigned Nash will return for 2018. Words Greg Macleman. Photography Tony Baker.

DRIVEN: NORRIS SPECIAL  Behind the wheel of a Flywheel regular

As the anonymous buzz of the traffic fades with every step, venturing into the historic grounds of Bicester Heritage feels like travelling back in time. Stretching before you is an avenue, flanked by two roads at right angles, the space between dotted with red-brick buildings and tall trees dating back to the station’s beginnings with the Royal Flying Corps. It stands today largely unchanged, one of the best-preserved bases of its type left in the country, despite a military history dating back some 102 years. There could be no better place to drive one of the most campaigned competition cars ever made – a machine entered in more than 450 events, with 153 outright or class wins to its name: the Norris Special.

This 1934 Frazer Nash started life as a TT Replica, powered by a 1½-litre, overhead-cam Gough engine. It was raced immediately at Brooklands and Donington by Philip Fontana Jucker, a hairy driver who made the most of the Nash’s famed oversteer. In 1935, Motor Sport noted that he ‘made a lurid broadside at Starkey’s Corner on the first lap’, adding that he did not continue. By ’1936, Jucker had modified the Nash with monoposto bodywork, a Meadows blower and a gearlever on each side – to be operated by whichever hand wasn’t gripping the wheel while going sideways – as well as fitting a Shelsley axle to cope with the bumpy Brooklands surface.

Finished in gold and nicknamed Another Straitjacket – perhaps in reference to its owner’s crazy driving – its career proved less than glittering, retiring more times than it finished. The Manchester-born driver’s luck eventually ran out, too, during practice for the 1937 RAC International Light Car Race on the Isle of Man, when he was killed at the wheel of his newly delivered Alta while preparing to take on the ERAs of Raymond Mays, Earl Howe and Prince Bira along the Douglas seafront.

The Frazer Nash continued to be raced at Brooklands, Phoenix Park and the Isle of Man, changing hands a few times before the shadow of war gripped Europe and its competition career was put on hold. It lay dormant until 1946, when it was bought by Frank and John Norris. The brothers had form, having already built the Frazer Nash-based, Alvis-engined Mk1 Norris Special, and by 1948 had fitted a new-old-stock 3571cc straight-six intended for an Alvis Speed 25. The pairing was a happy one, and it ran with some success at Shelsley Walsh, Brighton and Silverstone, faring particularly well at hillclimbs thanks to its prodigious torque and the instant power uptake of the Duplex drive chains – a semi-works feature retained from the ’30s.

The Special eventually passed to Harry Spence, who raced at Goodwood in 1963 and ’64, before being bought by Guy Smith three years later. Smith had a hugely successful career with the Special, building a new body with a more rakish nose and sharper, more streamlined tail. His achievements included beating Ken Wharton’s best time in ERA R4D at Shelsley in 1988. In later years, the car was run by father and son Stuart and James Baxter, the latter racking up a raft of VSCC records. Current owner Julian Grimwade, who acquired the car in 2014, has spent the past four years chasing those times, in the process winning the VSCC Historic Race Championship and the Motor Sport Brooklands Trophy. Not bad for a relative newcomer.

As suited as the car is to the rigours of hillclimbing, it’s every bit as effective around a twisting circuit – something we’re keen to experience via a few turns of Bicester’s demonstration track. There’s no elegant way to climb aboard the Norris Special, and matters are complicated further by not wanting to stand on the pop-in leather seat. Contorting your legs past the wide, sprung wheel is reminiscent of sticking a frayed piece of thread through the eye of a needle, but eventually your left leg finds the built-in footrest ahead of the clutch and everything else seems to follow. The starting procedure begins with turning the master switch under the seat, flicking on the ignition, then building fuel pressure with four or five strokes of the beautifully crafted brass pump beneath the dash. Tickling the throttle and thumbing the starter results in an angry bark from the side-exit exhausts, before it eventually settles to a surprisingly relaxed idle.

Handbrake and gearchange are both mounted outside the cockpit, the latter arranged in a reversed ‘H’ pattern. Selecting first is easy but requires a degree of commitment, while the clutch has two settings: on or off. With enough revs the Norris shoots off the line on a wave of engine noise and tyre squeal. It’s easy to imagine it doing the same in anger at Prescott or Étretat, responding with a roar from the exhausts and a burst of acceleration at the slightest provocation of the throttle. Grimwade reckons that if the entire track at Goodwood was made of chicanes then he’d stand a chance of placing well; words that come into sharp relief while nosing the Nash into the first bend of a damp Bicester circuit. The steering is incredibly direct and turn-in instant, the wide track keeping the front well planted, while the rear twitches with every pulse of power and the fat-walled Dunlop L tyres struggle for grip on the wet surface. Feed through onto the straight, plant your foot and the Norris again reveals its turn of pace: with this gearing it’s good for around 130mph in fourth. The aero-screen offers little protection as a bitter wind claws at your face the faster you go, before stepping hard on the brakes and throwing the Nash into the next bend.

It’s a visceral, thoroughly addictive experience and seven or eight laps pass in a heartbeat, which thumps away like a steam train such is the rush of adrenalin. With ears ringing, cheeks stinging and a grin from ear to ear, it’s time to flick off the power and clamber out. Grimwade looks on knowingly, before motioning to hold out a pair of visibly shaking hands: “So you were trying, then. Good!” Something tells us he’ll be trying a whole lot harder come 23-24 June.