Why you want one

A six-cylinder compact exec with rear-wheel drive? That’ll be the BMW-3-Series, the model that’s dominated the sector since the 1980s. But there are alternatives – and not all of the mare German. That’s where Lexus’ original IS200 comes in, the handsome four-door saloon that made its UK debut at the 1998 British International Motor Show and finally hit showrooms the following year.

The IS200 was cleverly designed, with an attractive wedge-like profile that made it standout from the crowd but without being too outrageous. It looked ‘premium’ too, despite the fact that it was sold in its Japanese homeland as a Toyota.

As for what lay under that handsome body, the IS200 had the right ingredients to make it properly competitive, including a 2.0-litre 24-valve straight-six (pushing out 153bhp) and a slick six-speed manual ’box. The 3.0-litre (211bhp) IS300 version arrived in 2001, with the Sport Cross semi-estate completing the range the following year.

In the world of premium compact saloons, it’s all too easy to be predictable by opting for one of the default German choices. Anyone who fancies breaking away from the herd, however, would do well to consider the IS200 – a handsome machine that’s good to drive, great to own and amazingly affordable.

This might not be The most powerful 2.0-litre of its time, but the engine itself is impressive in its tech. With four valves per cylinder and variable valve timing, it was an advanced unit and still impresses. Peak power is made at 6200rpm, and it needs working hard in order to make rapid progress; but even at high revs, the powerplant retains its silky smoothness.

The IS200 was eventually available in S, SE and Sport guises, though even the later pushed out the same 153bhp as the rest of the range. Anyone seeking extra power might consider the IS300, although this model came only with automatic transmission.

The engine is a durable lump and takes high mileage in its stride, but check for signs of maintenance and a service history.

Has the cambelt (plus idler, tensioner and – ideally – the water pump) been changed in the last five years or 60,000 miles? This is a usefully trouble-free-engine, but (like any) is only at its best when maintained well.

All IS200s come with a six-speed manual transmission as standard – although automatic was available as a cost option. The manual ’box is robust and takes high mileage in its stride, but do check for signs of worn synchromesh (listen for any ‘crunching’, particularly when selecting lower gears). Also check for clutch judder, a common problem on early cars. If it’s an auto, make sure it doesn’t jump out of gear under load, and tryout the ‘kickdown’ on your test drive.

With independent double-wishbone suspension and coil springs all round, the IS200 handles well and provides typical rear-drive entertainment. Equally good news is that the suspension is generally as hassle-free as the rest of the car, the most common problem being worn suspension bushes. That doesn’t mean you should be complacent, though, carryout all of the usual checks – listening out for any obvious ‘clonks’ and making sure the car doesn’t feel sloppy when cornering. It’s unusual for the coil springs to rot or snap, but you should still look. IS200 Sports came with lowered suspension and traction control as standard. 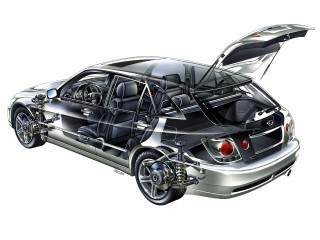 The IS200 offered superb build quality and some of the narrowest panel gaps in its sector; if the car you’re examining has less than perfect gaps, it’s probably been poorly repaired. Any obvious rust issues will also usually be down to previous damage. Rot isn’t a major problem but you should still check all four spring/suspension mounts, inner/outer sills, floorpans and other structural areas for any issues (watch out for fresh underseal). Panel-wise you should look for signs of bubbling paintwork, as well as evidence of respraying. Values are low, which means many IS200s are used and abused by uncaring owners.

With discs all round (ventilated up front) and ABS as standard, there’s nothing wrong with the way in which an IS200 stops. It’s a well-sorted system that even in standard guise impresses, although numerous upgrades are available via specialists. As with any car, check for scored or warped discs (is there any juddering under hard braking?) as well as worn pads, leaks from the master/slave cylinders and so on.

The power-assisted (but happily not over-assisted) rack and pinion steering is sharp and precise in operation, and remains generally trouble-free. Look for leaks and listen for any ‘groans’ on full lock, but other wise all should be well.

The IS200 was a well-equipped car compared with some German rivals, yet seems to suffer few electrical maladies. You’ll obviously need to check that all the usual niceties-work (heated electric mirrors, electric windows, remote locking, air-conditioning and so on), but it’s unusual to find a major problem. 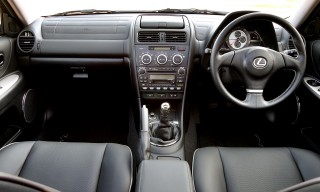 The interior is a smart design (especially the instruments, designed to look like a diver’s chronometer) and is generally hard-wearing, but you should check the front seat bolsters for wear and make sure the state of the carpets, gear knob and steering wheel correspond with the indicated mileage. Externally the biggest issue is pitting to the alloys – a common problem on early IS200s.

Wild mods aren’t the norm among IS200 owners, although a few have been known to fit aftermarket superchargers. If you crave more power the easy way, then buying an IS300 (instead of an IS200) would be logical. A performance exhaust can add a handful of extra horsepower to your IS200, however, investing in a Pipercross induction kit (currently around £204 from Euro Performance) also provides a boost. For track and fast road use, DC Performance will sell you a Japspeed oil cooler kit (which also relocates the oil filter) for less than £215. IS200 brakes are effective enough, but various upgrades are available – including K Sport kits (with eight-pot calipers up front), sold by DC Performance from around £900 per axle set. Suspension-wise there’s no shortage of coilovers and uprated damper kits, one of the most cost-effective being the Koni SSK Sport suspension kit (currently £695 from Euro Performance), which lowers the car by around 35mm.

I BOUGHT ONE GUY MCALLISTER

Guy is no stranger to Japanese motoring. But when he decided he needed a four-door saloon for carrying around himself and his two teenage sons, he knew which model to go for: “I remember seeing the IS200 for the first time at the 1998 Motor Show, and knew that one day I’d buy one. I still think it’s the best-looking saloon of its size, and it’s hardly dated at all. To me it still looks fresh and modern.”

Guy’s IS200 is a 2001 SE and is largely standard: “I’ve fitted an aftermarket induction kit to improve the car’s breathing, but otherwise it’s completely stock,” he says. “The IS200 is so good when standard, I don’t see the need for major changes. I just love the sound of that straight-six, and on long journeys it’s simply effortless.”