There are some people within the scene who require little introduction and whose names are likely very familiar to you. Naturally, of course, you can’t just stand confidently behind a podium and say ‘This person requires little introduction,’ then merely vacate the stage. You might get smacked in the face by a bristly ball of tumbleweed.

So, ladies and gentlemen, here’s a man you may or may not have heard of – John Ludwick Jr. A fella who, it’s safe to say, knows a thing or two about knocking together badass rides. If you’re unfamiliar, it’s forgivable: John isn’t just a BMW perv, he’s also well known for his old fin-tail Merc on air, and his outrageously ratty Chevy Corvair. But his latest creation, we reckon, is his finest work. And we’re not just saying that because it’s wearing Bavarian propeller badges. This feels like the culmination of a lifetime’s obsession.

The forthright New Hampshireite plays with lasers as his day job, which is an ineffably cool thing to print on your business card (actually, his business cards are probably made of aluminium with artfully etched details in otherworldly fonts), but this future-facing vocation is at stark odds with John’s retro motoring proclivities. So why a BMW this time? 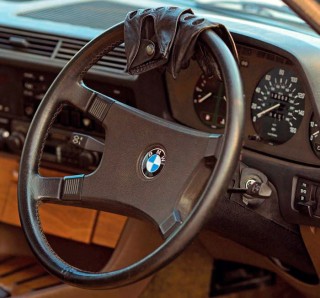 “My interest stemmed from the ’80s-’90s DTM series when I was a kid,” he explains. “The styling, the motorsport roots, the overall persona of the brand.” Aha. This isn’t some whimsical fancy then, but a flame that’s been burning for some time.

“My first BMW was a 1971 2002 Roundie,” he continues. “I’d always been into VW Mk1 Rabbits, but I also always loved the size and sportiness of the 2002. I’ve actually modified a variety of different cars over the years; a few of my favourites were my bagged 1960 Mercedes-Benz 220SB Hydrak, bagged 1985 Mercedes-Benz 190E W201, static 1989 VW Fox 1 Estate, and my roof-chopped and bagged 1965 Chevrolet Corvair.” This is a man who likes things scraping the asphalt, then. That explains a few things. But we were asking about this E23 7 Series specifically, weren’t we? Well, it turns out that John had owned a US-spec facelift E23 years ago and, while it didn’t feel like the right base for a full-blown project, its old-school charms and bargelike wafting had wormed their way into his affections; he was always keeping one eye on the classifieds, just in case ‘the one’ should pop up.

“I eventually found this car in the middle of the woods in Vermont,” laughs John. “It wasn’t running, and had been sitting behind a barn for some time. The car had been lingering on Craigslist, and apparently no one had even come to look. It was originally purchased new and owned by the Consul General of Turkey while living in London in the 1980s; he retired to his home in Montreal, Canada, and had the car shipped there. I bought it from a gentleman who had been working on the car for him, before purchasing it himself.”

Well, well. You wouldn’t expect a character of John’s calibre to start with just any old base motor, would you? The thing has to have a story, it all serves to thicken up the car’s own personal narrative. It may have felt like an ignominious move on the E23’s part to shift realities from a London consulate to a forest in the north-eastern United States, and the arrival of our man John must have seemed akin to Superman arriving on the scene, ripping off his specs and scooping the Beemer up in his rippling arms. 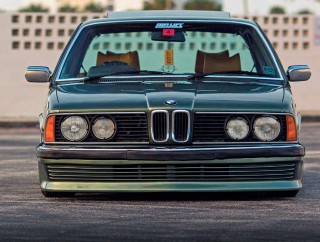 “As soon as I saw it, I knew it was the one,” John grins. “A Euro-spec, pre-facelift sharknose, five-speed manual, RHD, fully-optioned… it ticked all the boxes. I started making plans straight away, of course! Being the spec that it was, I decided to search for the original BBS body kit pieces – although that was harder than I expected. I ultimately found the BBS front valance in London, which my friend Bruce Holder in Bristol was able to collect for me, then another friend, Ben Russell, flew back to the States with it. I found the BBS rear spoiler in Poland, in great shape, and the wheels were next: I bought them from a friend in California in rough condition and needing full refurbishing – they’re 9×18” Ronal AC Schnitzer Type II Racing wheels. I had originally considered BBS wheels, since I was collecting the BBS kit for the car, but once the Ronal Schnitzers came up in the right width and offset, I knew I’d found the rims I wanted to run on this car. I feel they still completely fit with the overall look I was going for, while still being a German, OEM+ wheel.” And once you’re packing that sort of hardware, you can’t leave the poor thing hanging up there in orbit can you? So John got on the blower to Air Lift Performance to spec a full air-ride kit, the controller of which has been neatly modified into the car phone. Because all 1980s luxobarges need a car phone, right?

The suspension setup is actually constructed from one of Air Lift’s universal builder kits – as you might imagine, custom suspension for models like this isn’t just sitting on the shelf – and John was keen to get it all fitted without modifying the chassis itself; a few mounting positions had to be rethought, but the over-arching idea was always to be able to return things to stock if need be. With such an original classic, this is just common sense. And with this in mind, the engine and interior have been largely left alone too. If it ain’t broke, don’t fix it. 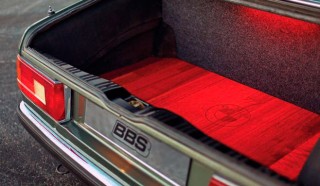 “Being a hard-to-find Euro-spec car here in the States, I wanted to keep the engine as OEM as possible,” he reasons, “so I only replaced parts with OEM ones when getting the car running and sorted again; ignition, fuel management and so on. It was the same thought process with the interior – being so original, well-specced and in such great condition, I wanted to leave it as factory as I could.”

All of this implies more work than you might think, however, as you don’t just haul a car out of the woods, slam it on some tasty rims and call the job a good ’un. No, there’s been a colossal amount of elbow grease expended between that point and this one. The transition from woodlouse habitat to show-winner isn’t an easy one. Working out of his father’s shop, John’s friends and family were instrumental in helping to craft this vision of slab-sided perfection, and there were more than a few late nights to get the car just-so.

When we ask John what his favourite modification to the car is, he doesn’t hesitate for a microsecond. “It’s the car phone,” he says. “For years, I’d always wanted to use one as an air-ride controller in a flagship car, so my friend, Moe Collins of Mobile Electronics Solutions, helped me completely rebuild the interior and wiring of the phone to operate the air suspension, using its factory leader cord and buttons. We also illuminated it red, to match the factory BMW instrument illumination.” It’s this attention to detail that makes John’s builds stand out. 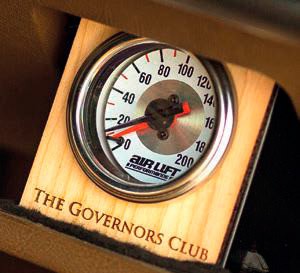 Unsurprisingly, John is already elbowsdeep in yet another project; he’s building a custom ’1952 Chevrolet cab-over dually to use as a hauler for the chopped Corvair – but that doesn’t mean he’s done with the BMW. Fear not, there are always plans bubbling away. Shortly after our shoot, he fitted Air Lift Performance 3H management to the car, and he’s tinkering away on various upgrades throughout the build. John also intimated that, were money no object, he’d be keen to attempt reworking it into a tribute to the super-obscure South African 745i E23. And we suspect that, for someone like John, the notion of a little impossibility wouldn’t be any impediment to progress… we’ll just have to keep an eye on him. 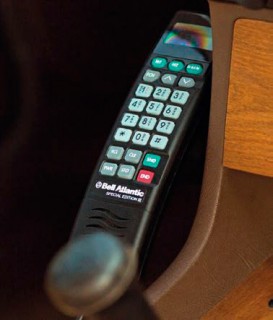 THANKS My father, firstly, for all of the help and support over the years. Moe Collins at Mobile Electronics Solutions, the good guys at Air Lift Performance for all of the support, Mike Cashman and Steve Laferriere for all of the late nights and lastsecond help, Frank Gatto for helping transport the car to Florida for this feature to happen, Jonathan DeHate for all of his great photo work, Mike Crawford at Kleen Freaks and Performance BMW for this opportunity

“I eventually found this car in the middle of the woods in Vermont. It wasn’t running, and had been sitting behind a barn for some time”