Stung by press reports putting the 348 in the shade of the latest Porsche 911s and Honda’s NSX, Ferrari responded decisively with a car that didn’t just outshine its rivals: it was quicker than its own V12. Five-valve heads, dry-sump lubrication and titanium conrods contributed to the highest bhp/litre of any then-current production engine, beating even the McLaren F1 with its 109bhp/litre and a rev limit of 8800rpm. 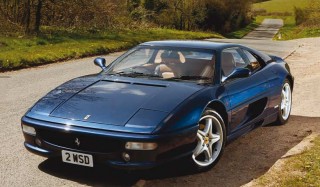 Having formidably re-established itself at the front, Ferrari added Formula One technology a few years into production, in the form of the F1 semi-automatic paddle shift. It operated on the same six-speed ’box that did such a great job of putting down the power on the manual F355.

It can be trickled around town with ease in a way that previous Ferraris never could, especially in ’1997-on single-ECU form. Earlier F355s had twin ECUs and felt coarser, though they were also marginally faster and more responsive. Find an open road and the car comes alive. The engine sounds better above 5000rpm and really rockets forward over 6500, necessitating quick reactions to change up before the rev limiter cuts in, fully justifying the F1 gearchange option.

It’s also a great car to look at, Pininfarina brilliantly echoing the 308GTB and 288GTO in the styling cues for the aluminium and steel shell. A highly aerodynamic full-body undertray was designed to equalise downforce between the two axles. In practice, that presents one or two disadvantages when it comes to servicing access and can also trap muck and moisture, promoting rust – definitely an area to inspect carefully.

Despite their relative modernity, these Ferraris are not immune to corrosion. While the structure was better protected than earlier models, Maranello was never going to slake several kilos of rustproofing solution in and on its lightweight bodyshell. The tubular engine-support cradle is particularly rot prone, needing to be removed and sandblasted before having new sections welded in – clearly not a cheap process because the engine has to come out first.

The motor also officially has to be removed every three years for cambelt replacement (no matter how low the mileage). That’s fine for DIY enthusiasts with the right equipment, but costly if you’re paying specialists to do it for you. As prices rise, so do insurance premiums: these are not cheap cars to own but, if that’s not a problem, they are immensely rewarding to drive.

3 Front wing around the side repeaters

The high-revving, 40-valve, 380bhp V8 engine is a very sophisticated piece of equipment that requires the highest quality maintenance. Don’t even consider a car without full service history with all of the right work shown, unless the price is much lower than average and you can cope with the almost-inevitable consequences. Connolly hide and trim (or composite racing seats to order) can be spoiltby plastic panels such as this that go sticky. Specialists have solutions. Check radiator cores on both sides: they can rot out. The oil cooler is also on the near side and the aircon heat exchanger Is on the off side. See both fans function. High temperatures can cause splits near air-injection pipes in thin stainless steel of OEM manifolds. Inspect both sides. JP offers a repair service: 01625619916 Suspension warning light on means gears or motors have failed in the two-setting dampers – fairly inexpensive to fix – but leaks mean replacement, at £1200 each! Electrical faults are pricey to rectify so work through all of the items, especially heater and aircon functions. Spider roof operation also moves the seats. A rattle from the clutch housing area on switch-off means flywheel needs rebuild. Manual ’boxes are otherwise strong, but F1 clutch especially is easily wrecked. Supremely purposeful yet elegant, the F355 is happy to potter or howl down the road at a fearsome pace. Handling and grip are both brilliant; ride supple, too.

It’s reasonable to expect a unit that revs to 8800rpm to need an overhaul by 50,000 miles; after all, it’s not that different from race engines that need rebuilding several times a season. Test compressions: one down may indicate a faulty injector over-fuelling and washing the bore, so you may get away with a new liner, but several down indicates the need for a full rebuild. If the plugs are oily, chances are that the valve guides are worn – common on pre-’1997 cars, especially in the USA, where max power is 5bhp lower due to emissions requirements. Also check that the oil level is up to the mark – worn engines lose a lot and damage from running too low doesn’t bear thinking about. Black exhausts are another sign of high oil consumption and are likely to have clogged the catalytic converters. Conversely, white exhausts indicate cat failure – as do rattles, so tap them. Sports cats cost £1200 a pair. 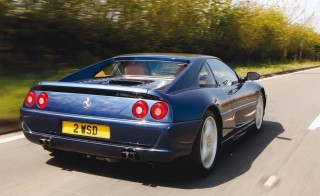 The V8 should come out every three years for cambelt replacement, so make sure that it’s been done. Alloy-steel hose joints need to be separated and, if they are seized, will add c£600 to the bill. An alternative is to remove the fuel tank and leave the engine in situ, but this needs to be done carefully. Get underneath when it’s running to listen for a rattle. If so, it’s a £2500 engine-out job to replace the oil-pump drive tensioner.

The ’box is durable unless raced, but the clutch can be wiped out in 1500 miles by paddle-shift abuse. The F1 actuators can fail and have to be rebuilt by specialists for c£2.5k. Ferrari supplies only complete units at £10k! The 18in wheels have magnesium rims: check their condition.

Downing fulfilled a boyhood dream when he bought F355

“I got Performance Car when it came out, and Always wanted one – I was 13 back then – but I said it would be red,” confesses Downing. “Then six years ago this one popped up and I really liked it. I’ve only seen four others at club meets and none with Beige leather and Bordeaux carpets.

I’ve got two kids so I don’t use it as much as I should, but it sometimes does the school run. I took it to Le Mans two years ago and try to give it decent runs, such as to Wales. Everything is original except the stereo, and I improve some details every year – the hide on the airbag panel is on the list. The engine came out when the cambelts were done in 2012, but two years ago Migliore did them by taking the tank out. Changing the 12-year-old tyres made a huge difference.”

GTS is roughly 5% cheaper than berlinetta;

Left-hand-drive cars are worth about 20% less

Rardley sold this tidy Spider to its owner 12 years ago, since when it’s covered about 10,000 miles. It’s been dry-stored, on SORN, for the past two years. As well as the F1 shift, it has electronic dampers, a Challenge rear grille and a Tracker. The detailed history book shows every service, including confirmation of the fuel pipe recall.

It is straight, with no kerbing to the alloys and lots of tread on the Bridgestone Expedias. There are a couple of small wear patches on the hood and a tiny hole in the outer lining on the offside, but the power mechanism works perfectly.

Inside, the unworn hide is just lightly creased, with a few scratches on the outer driver’s bolster. The motor is clean and tidy with no leaks. It was serviced in January 2013 at 34,781 miles, the last of eight stamps in the book, though it had a cambelt service 18 months and 600 miles before that. Plus, it will be fettled again before sale. It starts instantly and behaves perfectly, with smooth take-off and shifts, plus powerful brakes.

Under acceleration, its note warbles from busy-sounding V8 into a malevolent howl, showing that the (stock) exhaust works as it should. Slow without touching the paddles and it correctly shuffles down the ratios. Oil pressure is just over 70psi at any revs, while temperature on a shortish test reached only a third of the way up the gauge. It comes with the books and tools, plus MoT to March, but the J13BLU plate isn’t included.

Azzurro California Spider is one of five built in the colour Cabin is in good order, including the dash and all the trim Nicely presented V8 last had a clutch 10,000 miles ago.

Brakes 300/310mm ventilated discs all round, with servo and anti-lock

Detuned to 350bhp to avoid blowing up the gearbox, the twin-turbo V8 gave Ferrari-baiting pace for a bargain price – and still does. Better rot protection than of old but beware overheating.

For once, the Porsche rocket is rarer than the Ferrari, reflecting the range of brilliant nonturbo 993s. Just 14 turbo cabrios were built. S was added in late ’97 (183 made; 33 for the UK).

Exquisite PF lines updated the 348’s fussy styling and disguise the F355’s width, to which you soon adapt.

The right Ferrari F355, whatever the body shape or transmission, is a fabulous car to drive and just look at. It will give you enormous pleasure, provided that you spend the money to keep it as it is accustomed. Buy the wrong one, though, and you will need deep pockets to put it right, but the expertise is out there if you need it (and can afford it).

• Prices have shot up

• Costly to own as well as buy

• Needs top-quality maintenance; parts are expensive, some fiercely so