There’s something immediately familiar about Dunedin man Warren Good’s distinctive teal, blue/black bonnet, Listerine-backed, ex–Tim Harvey/Vic Lee Motorsport 1992 BMW 318is. Whether the car is famous or infamous, however, depends very much on your perspective. The car — VLM E36-001 — is justifiably famous, for instance, for the roles it played (of which, more in a minute) in Harvey’s win in the 1992 British Touring Car Championship. 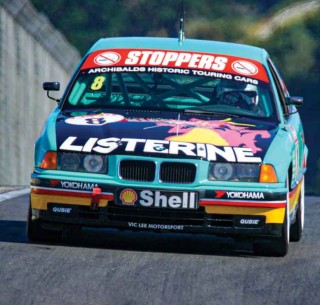 It is equally infamous as one of the cars sold soon after team boss Vic Lee was convicted and sentenced to 12 years’ imprisonment for smuggling cocaine into the UK from Holland in the team transporter!

The two Vic Lee Motorsport cars were effectively the first of the new breed of Super Tourers built to replace Group A-spec E30 M3s. Coincidentally, the sister car, VLM E36-002, has also been rebuilt to original ‘Listerine’ spec and now resides across the Tasman. They were also, as it turns out, the last of the twodoor coupes to be built in the era; Super Tourer rules were massaged during the 1992 season to favour fourdoor body shells.

As well as being the first cars of the era to run dry sumps — a corollary of having to fit the 318is engine in the bay of the then-new, low-nosed E36 — they were also the first to run differential oil coolers, tucked up into the right rear corner of the boot.

What fans like me, having spent many a happy evening in front of the TV through the early ’90s watching delayed coverage of the BTCC, remember most about the two ‘Listerine Beamers’, however, was the final round of the 1992 series at Silverstone where Tim Harvey finally sealed the 1992 title with a fourth-place finish driving teammate Steve Soper’s car! 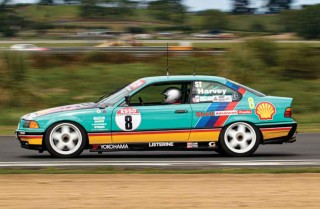 Early season stand-out John Cleland shared joint-favourite status with Harvey heading into the Silverstone final with just one point separating them and Cleland in front. While testing ahead of the final, Harvey spun and backed his car, VLM E36-001, into a barrier. The damage was apparently relatively minor and able to be repaired in time for the Silverstone meeting.

To be on the safe side, it was decided that Harvey should drive teammate Soper’s hitherto undamaged 002 car while Soper, who was not in contention for the overall title, would drive the repaired 001.

What happened next is still subject to spirited debate 27 years later, thanks largely to YouTube and the incomparable commentary of Murray ‘Muddly Talker’ Walker.

You can watch it yourself by searching ‘Soper vs Cleland’ on YouTube, and make up your own mind as to who was ultimately at fault … or not.

The first drama came early in the piece as Soper put a move on the third-placed Vauxhall of David Leslie. Leslie resisted, Soper spun and was hit by the Peugeot 405 Mi16 of Rob Gravatt. 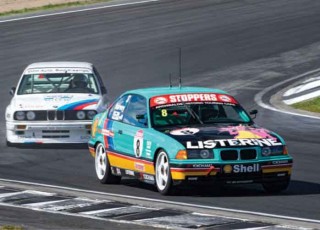 Despite the damage, Soper was not only able to continue, he was able to quickly catch title prospects Hoy, Harvey, and Cleland who were circulating nose-to-tail in fourth, fifth, and sixth places respectively.

Harvey finally put a move on Hoy with just two laps to go, only to slow both and let both Cleland and Soper past. The order was now Cleland in fourth, Soper fifth, Harvey sixth, and Hoy seventh.

Had they remained in those positions until the chequered flag came out, the 1992 title would have been Cleland’s, with Harvey second and Hoy third. Neither Harvey nor Soper were about to let that happen though, with Soper getting alongside, and eventually past, Cleland for fourth place.

Harvey then got a better run out of one of the following corners and passed Cleland for fourth, then found himself third as Soper immediately let him by.

Cleland was not finished though, two-wheeling across the ripple strip as he tried desperately to get back past Soper. He did get past, albeit only until the next right hander, when Soper dived down the inside and hit Cleland’s Vauxhall a glancing blow on the driver’s side, the contact sending both cars spinning off the track and out of the race and, for Cleland, title contention.

And that was effectively it, as far as first chapters go for VLM E36-001. The serious drug-trafficking charges levelled at Vic Lee meant that his team was disbanded and both cars sold, initially to the privateer Team Dynamics squad, who put Matt Neal behind the wheel of 001 for what turned out to be a second BTCC win in as many years for the car in the TOCA Challenge for Privateers.

Everything about them was state-of-the-art at the time. They were built around fully caged left-hand-drive bodyshells provided by BMW Motorsport

Neal also ran it in the 2000 Cup division of the Deutsche Tourenwagen Meisterschaft in 1993. That was pretty much the last hurrah for the car in terms of contemporary competition, until it re-emerged in 1997 when it was sold to a Swedish team — Team Mobimech — and run, with a 3.2-litre BMW six-cylinder engine — in the Swedish SLC Endurance Series from 1997 until 2003.

By this stage, the car was well into its ‘former glory’ state and could well have been lost for good had not Kiwi race-car restorer Rick Michels not been talking to a car-buying contact in the UK one day.

“I had arranged to buy several cars through him previously,” explains Rick, “and he mentioned that he had come across what he believed to be the ex-Harvey car — in quite a state — in Sweden.”

Never one to turn down a challenge when a Group A or BMW Super Tourer is concerned, Rick bought the car and then had it shipped to his Evolution Motorsport workshop in Invercargill.

Once the car was here, Rick was able both to verify its provenance and consider what to do with it.

“It had been converted to a Thunder Saloon, was cut about quite a bit, and had a fibreglass front and doors. The rear guards were cut well open to fit the massive wheels, there was no engine and about two-thirds of a gearbox. On a scale of one-to-ten where ‘one’ was a basket case and ‘ten’ was in concours condition, I’d say it was a ‘three’ … but the bones were there.”

So, as it turned out, was Warren Good. He already owned the Nissan Mobil 500 Wellington Street Race-winning 1989 Schnitzer BMW M3 and was also enjoying driving a contemporary E46 WTC car in the South Island Enduro Series.

He didn’t need another BMW race car. But there was something about the ex-Harvey car that piqued his interest, particularly now that it was literally just down the road from his Dunedin home.

“When I first got it here, I didn’t really have a plan to keep it or sell it,” explains Rick. “To be fair, too, it [the rebuild] took a lot longer than it should have because I was doing most of the work on it part-time and between a lot of other things going on at the same time. “I had a lot of help from Mark Quertier. He had to find a lot of the bits and fabricate even more. But we got it to a point where Warren could take over and complete a lot of the finer detail.”

Never one to turn down a challenge where a Group A or BMW super tourer is concerned, Rick went ahead and bought the car and then had it shipped to his Evolution Motorsport workshop in Invercargill

Since purchasing it, Warren has certainly put it to good use. He gave it its local debut at the annual MG Club Classic Race Meeting at Manfeild in 2015, before doing the Skope Classic and Evolution Motorsport historic meetings at Christchurch and Invercargill respectively in February 2016 He then shipped the car home to Great Britain for the annual HSCC Super Touring Challenge meetings at Brand Hatch and Silverstone later that year.

The response from fans, says Warren, was fantastic, many fondly remembering ‘Clifford the Dragon’ used by mouthwash manufacturer Listerine as part of its sponsorship of the two VLM cars.

Unfortunately, Tim Harvey was too busy with his role as a commentator with the contemporary BTCC series to attend either meeting, but Warren did get to show Steve Soper round the car.

Soper sat in it — for the first time since his clash with Cleland in 1992 — but admitted it wasn’t his favourite car of the era.

Harvey, on the other hand, has told Warren that it is definitely his and both hope one day to have its original driver back behind the wheel and turn some laps in it.

In the meantime, Warren and fellow Archibald’s Historic Touring Car Series driver Arran Black like nothing more than working on Warren’s two cars — he also owns the E30 BMW M3 that Black drives — in the off-season and travelling around the country in the summer, sharing the distinctive look and feel of their modern day classics with fans of the era in the rounds of the increasingly popular retro series.

As this issue of New Zealand Classic Car goes to press, Warren will also be racing one of the new-generation two-litre turbocharged TCR cars at the opening round of the South Island Endurance Series.

As much as he is looking forward to driving a modern, hi-tech car, come January he will be hankering to get back behind the wheel of his beloved BTCC-winning 1992-spec BMW 318is.

“What do I like most about it?” he ponders. “The fact that they are so basic and don’t have any electronic driver aids like the new cars. What you see is what you get. That mightn’t make them as easy to drive as a modern car, but get it right, even if it is just for a lap or two, and it is probably more rewarding.”

THIS ONE WAS A ‘RIP SNORTER ’ BUT IT WASN’T ONLY THE CAR THAT WAS A SNORTER. A COLOURFUL CAR WITH AN EVEN MORE COLOURFUL PAST