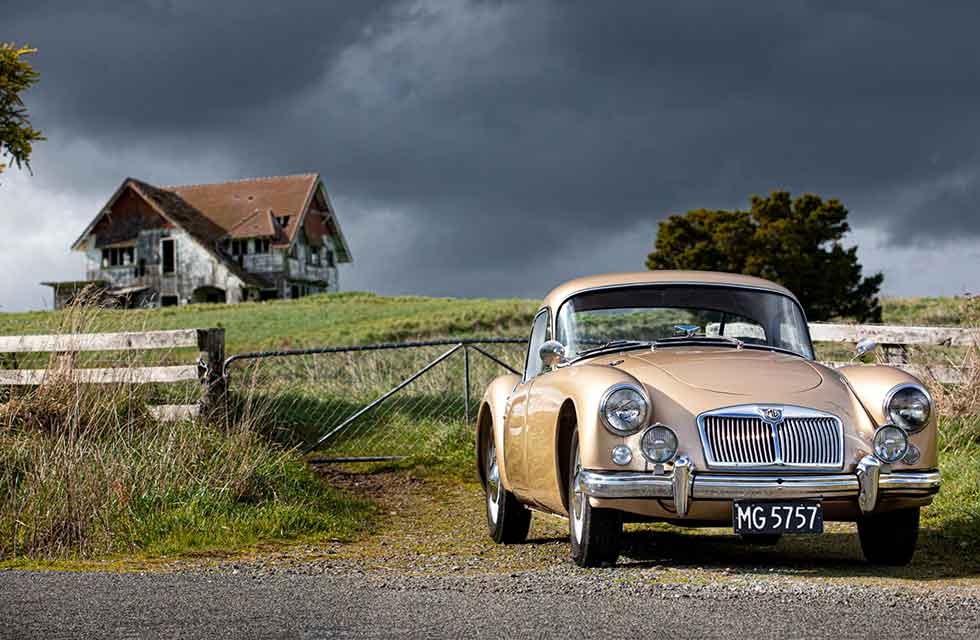 Straight A – a fresh start for MG. MG has given birth to some cracking cars since it kicked off production in 1924, and Mike Hubbard’s outstanding 1957 MGA is certainly no exception. Words and photos: Aaron Mai.

ELEGANT AS EVER – FEATURE 1957 MGA roadster

As the ’50s dawned, the automotive world was kicking into high gear, and Morris Garages was feeling the pressure to update its ancient T-series. The year 1955 ushered in a new era for MG in the shape of a sleek and beautiful new body for its new car, the name of which also indicated a fresh start. The MGA revolutionized the marque’s design language, consigning its traditional, upright, wooden-framed bodies and external guards to history.

Sixty-two years later, the svelte MGA is just as much of a knockout as it was in ’1957 when it rolled off the production line. It came with a bulletproof 1489cc B-Series engine, a four-speed gearbox, independent front suspension, and drum brakes. The MGA was marketed with the tagline “Safety Fast” splashed across dealership windows.

With an upgraded engine, the drivetrain was also replaced with a stock internal four-speed MGB gearbox, which also had overdrive

While it shared a lot of parts under its stylish skin with the MG TF, the side rails under its monocoque body were widely spaced, giving the MGA excellent modern handling, a low centre of gravity, and a super-sleek profile. All of this style and sportiness makes it an evergreen choice for classic car collectors.

Bitten by the bug

Mike Hubbard was first bitten by the MG bug in 1970 when he purchased his first MGA, a 1622cc MkII, before marrying his wife Linda. Not long after, however, the couple parted with the car to purchase their first house. Despite owning the car for a mere two years, the little MGA had already left an impression, and they both vowed that down the track they would own another, or, if possible, the exact one that they had sold. As Mike says, “The car just grew on me”.

They went looking for the previously owned MGA in 2005. It was nowhere to be found, but, while browsing Trade Me, Mike chanced on one begging for a proper restoration. The car was located close by in Johnsonville, and the short trip was made to see it in person. It was accurately advertised as a restoration project, a bit rough and in relatively poor condition, but Mike pulled the trigger and bought the car on the understanding that the only way forward was indeed a full, body-off restoration. The car was totally original and intact, except for the engine, which was sitting in the corner. The task at hand didn’t faze Mike, who is no stranger to full bare-metal restoration, having done the same with an MG Midget previously. It was time for round two.

After hauling the MGA to its new home, Mike got stuck in and stripped the car back to its bare chassis. There were no surprises as the car came apart, as a thorough inspection prior to the purchase had alleviated any worries about what may lurk under the skin. The plan was simply to restore the MGA to its former glory and ensure that it was in good running condition, and there was no deadline that the project needed to meet. Mike was still busy with work and didn’t have a lot of time to work on the car, yet was happy to get to it when he could. Unlike with many automotive rebuilds, this particular one remained true to its restorer’s original vision, although a small, unforeseen benefit would arise as the project got underway — more on that later.

It came with a bulletproof 1489cc B-Series engine, a four-speed gearbox, independent front suspension, and drum brakes. The MGA was marketed with the tagline “Safety Fast”

When Mike started out, he decided to add a couple of goals to the restoration: he wanted a nicer car to drive, a little more power, and better stopping. The body was stripped and the chassis was sandblasted back to bare metal. Mike noticed that the chassis rail on the rear left corner was a wee bit bent, indicating a mishap at some stage in the MGA’s life. The rail was straightened out and the chassis was painted in black.

Time has been kind

Mike then turned his attention to the body. Happily, time had been relatively kind to this MG. The only rust to be found, which had already been discovered during his initial inspection, was in the back of the rear guards. A set of second-hand guards was sourced and flown in from Sydney. All the remaining bodywork was in near-perfect condition, so was simply stripped and prepared for paint. Mike entrusted the laying down of the sandy-beach metallic colour, originally from the Toyota line-up, to Andrew Fox of Classic and Modern Motoring in Petone.

Mike chose this colour in memory of the MGA that he had owned previously. He had been unable to locate a paint code, so ultimately decided on the sandy-beach hue. With the larger parts of the car nearing the assembly stage, time was still scarce for Mike, with his busy work life, so Andrew proceeded to begin assembly of the car on a ‘no hurry’ basis.

As the exterior had progressed nicely, it was time to shift focus to the mechanicals, and it was at this stage that the unforeseen benefit came to the fore. On opening up the original engine, it became apparent that it would not be going back into the car. Mike was faced with finding another 1500cc engine — or he could take the opportunity to give this MGA a little more spec without sacrificing any pedigree. The decision was made to up-spec the car by adding a Morris Marina TC 1800cc engine to give the MGA just a little more punch in the power department.

New 1800cc pistons were sourced out of India, while Hobson Automotive rebuilt the head and added an MGB grind to the cam. One-and-a-half-inch SU carburettors on a standard MGB intake manifold were added for the engine to breathe, while a new MGB fuel pump keeps the 1800 happily ticking over. Mike also added an aluminium 56mm core radiator up front to keep the MGA cool while navigating the twisting and turning Wairarapa country roads.

With an upgraded engine, the drivetrain was also replaced with a stock internal four-speed MGB gearbox, which also had overdrive. The decision to utilize MGB running gear came with a few issues. The motor was not a straight bolt-in job and was “a wee bit awkward”, as Mike puts it, while the gearbox required some additional chassis mounts to hold it up. But, where there is a will, there is a way, and the engine and box were mated and mounted into the chassis. The original differential was retained, and the beautiful sound of the 1800cc is delivered via the standard MGA exhaust with a stainless muffler.

Now that Mike had more power at his disposal, he was not about to cut corners on the brakes. As 1957 was the last year that the car was produced with drums all round, Mike opted to replace the front drum-brake system with discs, to ensure that the car would easily pull up when required, and to retain the factory rear drums.

The front suspension required some minor modifications, but this came courtesy of all bolt-on MGB componentry, and it all sits snugly behind the four silver pepper-pot 15-inch MGA wheels wrapped in Hankook Centum 165/80R tyres.

The cabin received as much attention as the body, and this is apparent as soon as you open the doors and see the beautiful winehued vinyl shrouding the interior.

Nick Trethewey of Mobile Upholstery in Lower Hutt was entrusted with ensuring that the high standard of workmanship was continued indoors, making the driving experience all that more enjoyable. Mike has accented the regal red cabin with black-on-chrome to complete the interior finish.

Seated in front of the driver is a period aftermarket alloy three-spoke steering wheel, while the gear lever’s rake was altered to create more clearance between the gear knob and the dash. The dashboard cluster contains an MGB electronic rev counter and a speedometer recalibrated to compensate for the MGB gearbox–and–MGA differential combo. The overdrive switch, which allows for more comfortable cruising, has been grafted into the dashboard on the right side of the steering wheel, in the same location that it is found on the MGB.

Mike wanted the MGA to have one more creature comfort, and so a full radio and sound system was cleverly blended into the interior by Kayne Thomson from In The Barn, Carterton. He retained the nicely crafted cover plate but hid the modern head unit behind it. It folds down to allow access, while two speakers have been mounted underneath the dashboard, well out of sight.

Mike and Linda made the move into a new house and location, and Kayne, who has extensive experience in rebuilding classic cars, took over buttoning up a few remaining tasks and helped with putting the car legally on the road in September 2018.

The attention paid to detail throughout the restoration, and the sprinkle of upgrades, make final result a lot of fun to drive. “We try and drive it at least a couple of times a week just locally around Wairarapa,” says Mike. “As you would expect, the car is not like that of a modern car. It is period driving with heavier steering and no power-assist brakes, but you drive while taking all these into account, which is very easy to do.”

Now all that is left to do is for Mike and Linda to enjoy the car and, with summer around the corner, there are plans to do some events with the Wellington MG Car Club and partake in some longer trips as well. MGAs are well known for being affordable, rugged, attractive, and simple. Simplicity is the keynote of all true elegance, and this is something that this MGA has in bucketloads.

Above: Vinyl is right for this vintage, but the wine-dark hue adds class anyway. The aftermarket steering wheel looks purposeful Left: Funky door catch dares to be different Below left: MG revels in its new flowing lines. Above: The stereo’s head unit sits behind sturdy blanking plate which folds down allowing access, and the speakers are out of sight under the dash.