Drive-my gets behind the wheel of Britain’s boutique supercar, The Noble M600 first drive. The explosion mattered little to the villagers of Enderby, its deafening crash washing down the tunnel of hedgerows and white-painted cottages at the side of the lane. The hunched old man in an overcoat just tugged his flat cap down tighter to save it from the jet wash; his dog didn’t even break its scamper.

Further along, the teenage girl with a pram was also oblivious: first to the unholy scream of cylinders as we approached, then to the dissipating boom amid the orange blur that passed her, her mind no doubt focused on the fish supper she would order from the chippy around the corner.

No frills, just speed The cabin may be spartan, but the Noble is about driving, not frippery.

Just like the residents of far-off war zones, where each bang and boom provides the terrifying soundtrack to their days, the villagers of Enderby in England’s east Midlands are inured to the deafening cry of the Noble M600, though its vibrations jar the foundations of their homes with regularity. It is seen, felt and heard almost daily in the hands of the test drivers and potential buyers who power it through Enderby’s picturesque and leafy lanes.

By contrast, inside what is quite possibly Britain’s fastest production car, it is impossible to temper the sheer exhilaration it provides. Even Peter Boutwood, Noble’s managing director and the man who knows this savage supercar best, cannot hide a glint of joy from his eyes as we slam an epic fifth-to-third gear change to bring our speed back down to double figures — miles per hour, that is — the one concession we make for this tiny settlement not far from Noble’s home, a small industrial unit on the outskirts of Leicester.

Are there any speed traps round here, I ask Boutwood. “No, though the police really like us; we sometimes give them a car to take out,” he replies. Resembling a three-way hybrid of gentleman racer, semi-sane scientist and new romantic star of the Spandau Ballet era, Boutwood has evidently given much of his own DNA to the M600’s genome. His apparent eccentricity is well matched with England’s answer to the exotica that traditionally hails from northern Italy, which he claims the M600 can beat by most metrics you choose. He has a point. Made almost entirely from carbon-fibre and weighing in at 1,250 kg, the Noble’s ridiculously light power-to-weight ratio of 541bhp per tonne helps take it to 60mph in three seconds flat, and 200mph in just under 30 seconds. Its performance and top speed, estimated at around 225mph, stack up impressively against the Lamborghini Aventador, while blowing the Ferrari 458 Italia off the black top. 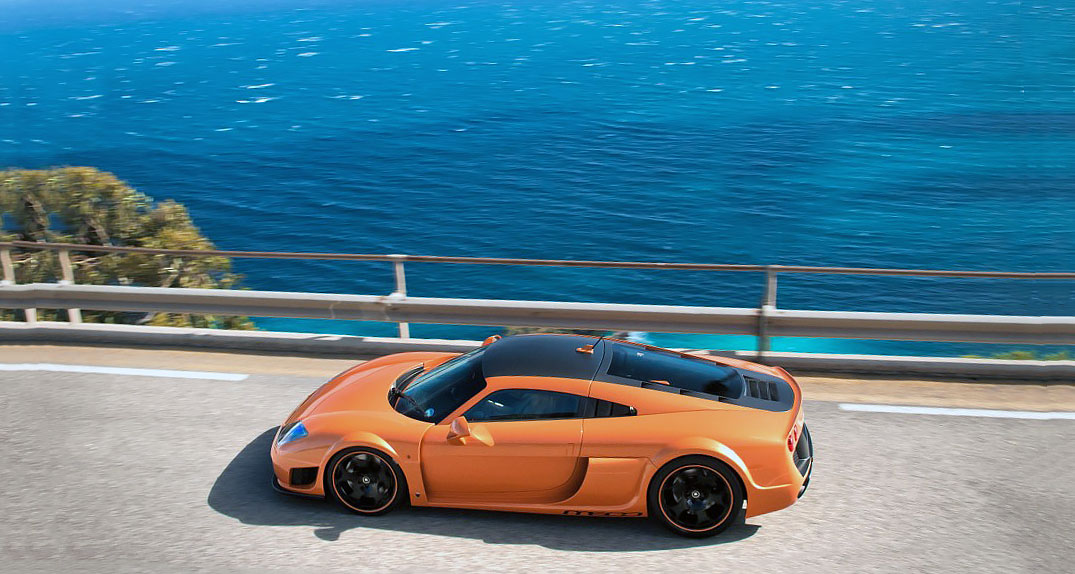 “What makes this car so special, so different from the others is the way the driver can control every element of it,” explains Boutwood. “It’s analogue. While other cars might have all the bells and whistles of technology to, some might say, get in the way of the driving, the M600 gives you complete control. We don’t want it to do the driving for you.”

At that moment, as if by illustration, the rear end shimmies momentarily and satisfyingly through a tight left corner as the lane rounds a copse, before a tap on the gas snaps it out with stunning precision. In the spirit of analogue, Noble refuses to offer ABS, arguing that such a system would rob the brakes of feel; and with near perfect balance on all four wheels, and extraordinary manners — again, just like Boutwood — there is little need for any electronic interruption. Many owners will flip the little red switch on the centre console — a firing button taken from an RAF Tornado fighter jet — to turn off the traction control for added lolz.

Noble began life in 1999 as the manufacturer of mid-engined rear-wheel drive sports cars. By 2006 its founder, Lee Noble, a British automotive designer who had left Ascari to develop his sports car philosophy under his own name, had departed the company and Boutwood began work on the M600 as a successor to the highly lauded M400 after its production run of just 75 units. The M600 isn’t made in much greater volume, with only 12 models built each year by a staff of 15. Boutwood hopes to see annual production increase to a massive 20 cars in the near future. Because of this tiny volume, the company has to run extremely lean.

The car is hand built and uses a 4.4-litre Yamaha-derived Volvo V8 engine with twin Garrett turbochargers equipped with variable boost. This setup will produce anything between 450 and 650bhp depending on how you feel and the position of a big red switch on the dash. 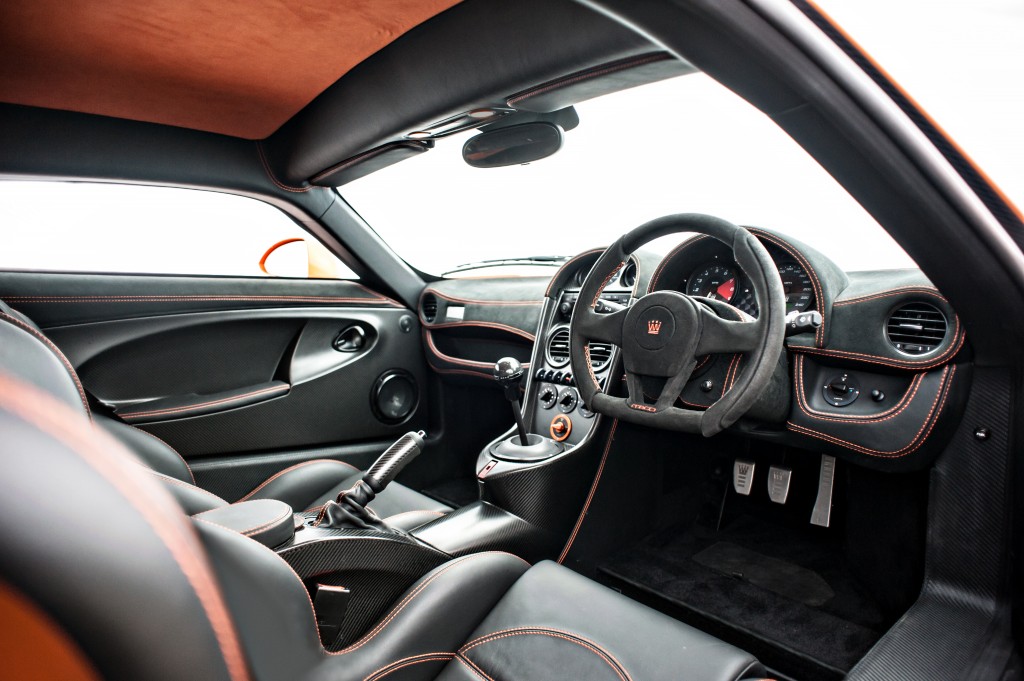 As with previous Nobles, the M600 uses a mid-engined space-frame steel chassis, which Boutwood says is as strong and rigid as those of his rivals, with double wishbones at each corner and coil-over dampers for its primary suspension. The engine and entire transaxle sit massively forwards on the chassis. Its steel brakes come with six-pot callipers at the front and four at the rear, and have been designed by British braking specialist Alcon. Britain has over recent years gone through something of a supercar renaissance, with the likes of Bentley and McLaren gaining the attention of enthusiasts around the world who would traditionally look no further than Emilia Romagna in Italy for their fix of fast.

This trend has continued through Noble, which along with the the soonto- be-reborn TVR, add a completely different and quirky dimension to what has become a beautifully sanitised quest to provide the latest technology and most sumptuous luxury at the fastest of speeds.

It is not as if the M600 is in any way shabby and lacking of creature comforts like, say, a Caterham. While there is hot and cold running leather throughout the unexpectedly capacitive cabin, the gauges and switchgear are housed in a shimmering grey sea of carbon-fibre — something viewed as basic in most cars or as an expensive extra in a Bentley. There is no GPS, and the stereo is the type you could pick up on eBay.

What the company has done is concentrate on performance and driving pleasure while adding just enough in the way of trim and features to maintain the interest of its well-heeled clientele. Noble has innovated through operational efficiency, not gadgets and gizmos, because it cannot call on supremely wealthy backers like Volkswagen Group or McLaren Racing to provide funds for the next great reveal.

Whether by design or by chance, Noble has chosen to boost the strengths of existing components by using its network of suppliers and tuners to turn tried and tested technology into a wholly contemporary sum of its parts. Behind the wheel of the M600, you find you don’t miss things like flappy paddles and ABS, you don’t hanker for launch control or race settings; you just feel like you’re driving how driving was meant to be — doing it for the sheer joy of it, inside one hell of an entertainer.

In the end it is its raw, brain-mangling performance that defines the M600, and certainly not its looks. That isn’t to say the Noble is an ugly speedling by any means; rather it doesn’t nearly impose itself the way a Pagani would, nor does it attempt to recreate the visual drama of a Lamborghini. Just as a British soap star will often lack the glamour of her American counterpart, Blighty’s super cars do not tend towards the misty-eyed design language of their global competitors — the McLaren 12C is another testament to this. It is fortuitous that the Noble is best viewed from behind, as this is the direction from which most will gaze on it. Above a bank of round tail lights and deep, curving sill, the rear clamshell opens up to a vast expanse of space. Engineers haven’t attempted to cram an engine into a tight space here; instead the block, manifold, tubes, rods and components can stretch out over a huge area. This swathe is the secret behind the M600’s remarkable poise: the engine, gearbox and entire transaxle sit so far forwards in the chassis that there’s still plenty of space for another power source. The front end, however, could best be described as tidy. While it would certainly merit a second glance, it doesn’t really fit into any category of retro, contemporary or futuristic; and it’s only when the face is taken in context with a glimpse of the flared flanks with their deep air intakes does any real aggression come through.

Though it lacks any great visual spectacle, there is one big feature on the M600 that ensures its continued desirability: the oversized crown logo on the rear and the gaudy yellow badge bearing the name of its maker on the bonnet. With just a couple of dozen models produced so far, the Noble name possesses the sort of cachet that comes with something that’s in high demand and low supply. In the Middle East, for example, there is only one M600 in the open, which was sold last year to a buyer in Bahrain. This snob value is only heightened by its $312,000 price tag, which immediately helps it appeal to collectors keen to add a high-performance British curiosity to their vast assortments of Italian finery.

The villagers of Enderby certainly aren’t snobs but they still never seem to complain about the sweet, sweet roar of the M600 when it blasts past on a daily basis. Maybe instead they are harking back to a time when all cars, like their village and the Noble, were beautifully analogue.