On my last trip out to the ‘Ring I left the M3 with Raeder Motorsport for it to fit some carbon paddles and an aftermarket steering wheel that I had supplied, so I was looking forward to seeing how these looked and if they improved the dynamics of the car. A few days later I had an email from the team there saying that the boss I had supplied wouldn’t fit with what I wanted to do and although they could fit the wheel, the paddles wouldn’t work and I would only be able to change gear with the gear shifter. They then added that from their experience the standard paddle arrangement retro-fitted to an aftermarket wheel wasn’t the best option anyway. Raeder reckoned it could make it work with its boss and aftermarket paddles, but it was quite a price increase that I hadn’t budgeted for but the car was there and I wanted it done, so I gave it the green light… 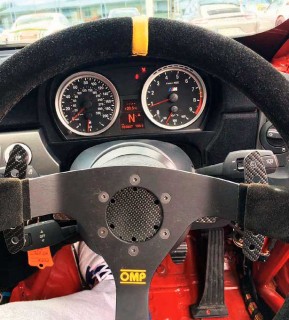 Upon my return for several days driving at the ‘Ring I went to the car to have a look and any price anxiety soon faded away – it looked amazing.

I had also wanted a spacer put in to bring the wheel closer as I had altered my seating position to better accommodate my legs, but this meant my hands were further away. To my surprise, the boss Raeder had fitted had positioned it exactly where I wanted, and I can trim the wheel in and out to a perfect position with the original adjuster. As you will see from the picture, these aren’t just eBay bolt-on parts, this is a proper handmade work of carbon art. Not only that, but the pull is crisp and very direct and it looks like it’s straight out of a GT3 car and feels it too.

The next day I went to actually pick my car up (even though it was a Sunday and 9am, Raeder was open) and I collected the car. It started on the button as you would assume and everything at first seemed fine. I pulled out of the compound and immediately the traction control started to interrupt progress. That wasn’t particularly unusual, especially as everything was now solid mounted and the DSC doesn’t like the way the car feels obviously (I suspect the fact that a 300kg reduction has further confused the OE calibration as well). This was first apparent on a track day at Bedford when I first put Michelin Pilot Sport Cups on the car, as the grip level increase caused the DSC to have a fit but the MDM mode that allows much more slip was a good compromise. It’s pretty good at reining the car in whilst letting you get away some sideways antics. In fact it is so clever that there have been quite a few fast situations on track in the wet where I have actually said a quiet prayer to the BMW’s M-power engineers, as without the MDM mode safety net, the car would have spun like a top into the barriers (the ‘Bomb Hole’ at Snetterton being one time that sticks in my mind).

Anyway, with the DSC going crazy, I look for my friend the MDM button and it’s obviously gone, as I have an OMP steering wheel now and some lovely carbon paddles and nothing else. Not too much of a problem as I’m not going to be stupid as it’s my first time out in the car for such a long time, so I just switched the DSC completely off… This was absolutely fine until I rolled out on track, applied the throttle and all of a sudden I can feel the DSC is back on. Reach down, switch it off again and the same thing happens again and again – damn!

I had no choice but to take it back to Raeder. With it being a Sunday, despite it being open, there was only skeleton staff on duty but one of the guys was able to plug in the lap-top and reset everything, so everything should have been good to go… 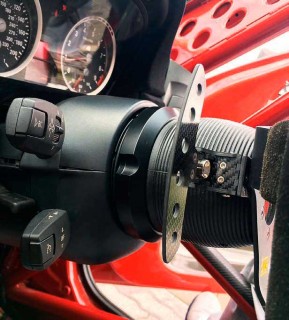 DSC off out I went out and this time I managed to get as far as just after T13 before the DSC was back on again. I turned it off and it actually stayed off for a bit longer this time. I made it all the way to Adenau Forest before it came on again. I stuck at it and do a second lap, but the back was skipping about a bit and the car was nowhere near as planted as it was last year. Discretion is the better part of valour and all that, so I took it back to Raeder and called it a day.

The next day I popped into the workshop about 3pm and was greeted with those beautiful words: ‘your car is ready.’ I had a chat with them about the issues, mentioned the missing MDM button and was told that I did still have MDM mode and that it was just discretely hidden in the steering boss/wheel hub!

Excellent. When 5pm rolled around, I was straight out on track and all was good – no DSC issues and everything was working well… and then the steering went a little heavy. I came in after a sighting lap, which I always do to get a feel for the track and to get the tyres up to temperature. I dropped the pressures to what they should be at and away I went again. It was a better lap, but I’m definitely not happy with the rear end – it is way too skittish, even with the extra downforce. I came in after that lap and before I could go out again the track was shut as there was a big crash – this closed the track for the rest of the evening.

The next day I was convinced the car’s rear suspension was binding and locking up due to it being too low, so I raised the ride height a little. This compromises the toe a little bit, but I was running enough that it shouldn’t make the handling too wild. I just wanted to see if the back end was jamming up or not. Whilst doing this I thought I should check the settings. I had looked at the compression high speed and low speed and had a little fiddle but never touched the rebound after I had it set it originally. What I discovered was most odd. Someone had adjusted the passenger side rear to fully soft – that obviously wouldn’t have been helping at all when the driver’s side was still on fully stiff!

While I was at the circuit I had seen a guy in the car park who asked me if I wanted to do a video feature on the car. He is co-owner of ‘Ring Garage – aka ‘Boosted Borris’. You can rent all sorts of wonderful cars from him, including a track-biased M135i, a full fat E92 M3 like mine or a full-blown stripped-out E46 M3 race car!

So I took the car down for its video shoot and it was more of a comical video than serious and I will probably be made to look like an idiot but hey it’s all fun right?

At the end of the interview part with me he asked how good the driver was, I responded with a ‘let’s go and see’. So we went off to the ‘Ring and I went out for quick lap to get the tyres up to temperature and check everything was okay… The steering was a still a little lumpy in parts but felt fine.

In the car park I strap him in and off we go – all was well – the back end was still not perfect but we were ‘making good progress’. There was a lot of traffic and we were on for a low eight-minute lap when out came the yellow lights and flags… There was a big off for an E46 M3 which had lost its front end and it was not a pretty sight. This messed up any chance of a good lap time, but I thought I’d still give it the beans as he was filming me with his GoPro. Then disaster struck – the power steering went rock hard – it was like driving a lorry. I was having to place my hands around the wheel and tug it to get it to turn. I didn’t want to back off and my pride was a hurt with embarrassing notion of viewers watching the video, spurring me on to drive faster than I should with no power steering – there were a few hairy moments and then the lap was over. 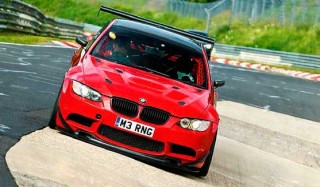 I apologised and he said he could see me fighting the power steering but that’s race cars unfortunately and I guessed the loss of steering assistance was down to those blasted pulleys I fitted.

Or was it? I took the car back to Raeder, and there was no boiling of fluid which was strange – just hard steering. I had a chat with my BMW tech and he said that if you run the car with no fluid it can ruin the seals. Sounds obvious, but when we were running the shells in getting oil up I wonder if the damage was done then? Who knows, maybe the part was just due to fail but all I know is it cost me a power steering pump so a reconditioned one has been ordered and the original pulleys will be going back on along with some new bolts.

So over the course of a weekend I ended up with just five laps and only one of them half hot with a passenger – let’s hope when I return that the car is ready for some abuse as I’ll be going along to a Destination Nürburgring track day run by British company Ring Weekenders and there will be a lot of nice cars from the UK going. Wish me luck!