Testing of the first vehicle launched under the British OEM’s Second Century plan had to factor in a new aluminum bonded platform and its first turbocharged engine. Words by Marc Noordeloos. 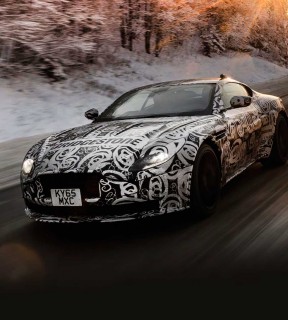 The Aston Martin DB9 introduced the British auto company’s modern VH platform in 2003. And since then every new Aston road car has had the same VH aluminum architecture – with the exception of the US$1.5m One-77 and the Toyota iQ-based Cygnet city car. But the VH will soon drift off into retirement, an inevitability as the first of several all-new models launch, beginning with the DB11 late this year.

“We started with a clean sheet of paper,” says Ian Minards, director of product development at Aston Martin. “DB11 has been the biggest challenge for the company in over a decade – if not its biggest challenge ever. From the body structure to the engine through to the electrical architecture and occupant protection, everything was developed using a new set of components.”

Development began in 2013, but engine work started in 2012 due to the new 5.2-liter V12 using turbocharging for the first time in Aston’s history.

Minards’ says his team worked diligently to maintain as much of the visceral character of the outgoing, naturally aspirated V12 as possible.

“We were extremely careful when choosing our turbochargers,” notes Minards. “They are twin-scroll, which spool quickly at low rpm and maintain their pressure-charging capability at high rpm. One of our key targets was what we call ‘time to torque’ – the rate at which the turbochargers spool up. Throttle progression and the way the pedal is mapped was important. It took hours and hours on the dyno. We also have water-to-air charge coolers with very short intake paths. There are no long, convoluted air intakes as we’d have with air-to-air charge cooling.”

The new, unnamed chassis is another step forward for the company. “What it has in common with the VH is the bill of process – how we assemble the car,” says Minards. “It’s still a bonded, all-aluminum monocoque, but every single casting, extrusion and sheet of aluminum is new.

It’s stiffer, lighter and meets all crash regulations. It also has new innovations in terms of the look of the car. We have a single-piece aluminum clamshell hood and the longest aluminum door we’ve ever put on a car.” 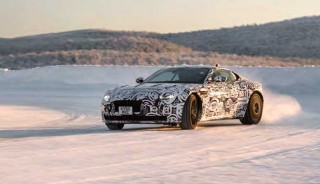 Assisting is Aston Martin’s technical partnership with Dow Automotive Systems. “It’s really about the bonding technologies,” notes Minards. “We’ve developed our hot-cure adhesive over the years with Dow. That’s around the bonded monocoque. We jig assemble the car and then put it into the oven to cure. We’ve developed a completely new body-in-white facility at Aston to assemble DB11, including a new oven. We are always looking for new and subtle ways to develop the adhesives with Dow.”

Mercedes-Benz is another valuable partner and DB11 is the first model to showcase the results of the alliance. “The partnership with Mercedes- Benz on DB11 is purely around the electrical architecture. The engine is 100% Aston. We get the best of the basic capabilities of the Mercedes electrical architecture and then we use our skillset to integrate add-ons such as audio systems. Aston Martin has the basic system integrity and we leverage Mercedes’ test regime, but we can customize it to the needs of our car.”

With an all-new car and new partnerships comes additional investment. “We’ve put quite a bit of investment into hardwarein-the-loop for electrical testing – particularly leveraging the Mercedes tie-in,” explains Minards. “With hardware-in-the-loop we can run multiple test regimes and do a lot of input and output simulations on the electrical system. We also now have our own materials-testing laboratory for salt-spray testing and abrasion testing on things such as leather and painted finishes. We’ve got environmental test chambers too, for humidity and hot/cold.”

Aston does the majority of its development and testing in-house. “We don’t have engine dynos, so we partner with a number of companies around the UK,” says Minards.

“We’ve invested quite heavily in body development and rigs at Aston. We have squeak and rattle rigs. We also still use Volvo quite a bit – we use their environmental test chamber and we do some squeak and rattle work there under climatic conditions. 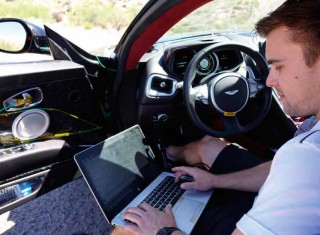 That relationship is still very strong, particularly on crash testing. We do crash tests in Gothenburg and in the UK at Millbrook or Mira.

“We also built a new workshop at Mira where we’ve been able to build prototypes. We can do things such as high-speed durability up to a certain speed limit,” says Minards, who adds that, while the Nürburgring is a “key site”, important results were achieved away from the track. According to Aston, the 5.2-liter V12 engine was subjected to a 150-hour high-speed test (HST) on a dyno, during which it was able to spend 9.5 hours at maximum intermittent speed and at wide open throttle (WOT). During comparison vehicle testing at the Nürburgring, which lasted 3 hours and 46 minutes, the engine spent 1 minute and 15 seconds at maximum intermittent speed and at WOT.

When comparing the two methods, the 150-hour HST was equivalent to 18 hours at the Nürburgring. But that’s not to say Aston Martin has abandoned track tests altogether. “We are using Nardo [in Italy] more and more,” continues Minards. “They have a mini ride and handling track there that is well correlated to the Nordschleife. It works well when it’s a bit rainy and snowy in Germany.

Strong supplier ties are key to DB11. “There’s Bosch for engine management and also, now, steering gear due to EPAS,” says Minards. “We work with Bilstein on dampers and Brembo, as ever, on brakes. Continental Engineering Systems is our partner on stability control but they also now help us on the instrument cluster. ZF is a big one for us with their transmission.

“Many of these relationships have been in place for years and the beauty is that you move with them and the technology. With Bosch we now have stop/start and cylinder deactivation for the first time [on DB11]. We can shut down an entire bank on the V12 now, running it as a straight six. We started using Bosch on the current V12 back in 2013 or 2014. We took that relationship forward and leveraged the new technology.”

Minards oversees a staff of around 500, broken down into five pillars. “Matt Becker looks after vehicle attribute engineering – dynamics, NVH, aero thermal and durability testing,” reveals Minards. “There’s also powertrain – engines, gearboxes, fuel systems. Chassis and electrical engineering are combined into one area. There’s logic there due to the complexity of chassis systems from an electrical point of view – EPAS, adaptive dampers, torque vectoring systems. I then have two areas in body engineering – body structure/ safety and interior/exterior.”

It’s exciting times at Aston Martin. After the DB11 launches there will be a replacement for the V8 Vantage featuring a bespoke Mercedes-AMG V8 engine and also the new DBX Crossover. Additionally, Aston and Red Bull Racing are developing the radical AM-RB 001 hypercar together. Minards and his staff clearly have quite a bit on their plate, but Aston’s future has never looked better.

DB11 prototypes endured cold climate evaluation in the sub-zero temperatures of Finland and Sweden, earlier in 2016.

ABOVE (LEFT): Approximately 250 sensors were equipped in all areas of the vehicle on the exterior, engine bay, windows and interior ABOVE: Soak tests were a critical part of the program to ensure the durability of mechanisms prone to high-heat damage.

A DB11 prototype’s trunk packed full of cables and test hardware. Heat information was relayed to a central computer system.

ABOVE: Aston Martin engineers covered around 25,000km each month to record all the required data LEFT: DB11 will be factory fitted with Bridgestone Blizzak LM001 and Potenza S007 rubber tires.

ABOVE: Data collected during hot weather testing in Death Valley Evaluation of DB11’s interior took into account customer feedback on previous models and focused on parts, including leather, carpet and plastic panels.