If you are a regular reader you’ll know this hasn’t been the case and I apologise if I sound like a broken record but that’s how it is. I want nothing more than to be writing that everything is perfect and the car is amazing. Unfortunately it isn’t… but there is light at the end of the tunnel!

As I explained last month I didn’t really have time to sort out the understeer I assumed was being created by the rear wing. This didn’t help the suspension woes as to dial out some of the rear squat I stiffened the compression to keep the rear from lifting the front. This did help but made the car a bit of a handful. With this in mind I came up with a plan. 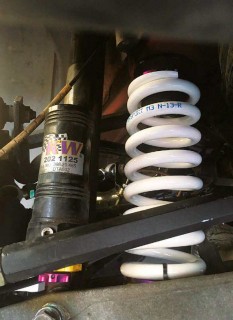 The first job was to try and balance out the aero with more front end downforce and also to soften the springs with some custom rates. Sounds simple enough but the car was running so low it was causing it to bottom out on the Carousel and a few other places on the Nordschleife. I didn’t really want to raise the car any more as the rose joints were already locking out but I couldn’t put an extended splitter on the car to balance the aero as this would just rip straight off and my friend Beat bet me it wouldn’t last one lap…

I decided to have a look at the tyres – I’ve been running 285/30 18 Michelin Pilot Sport Cup 1s for the past two years and I love them but I wondered if a change in size might help raise the ride height. It transpired that I’d gain 6mm if I fitted 265/35 18s but Michelin no longer make the Cup 1s so this was a blind alley.

I took a look at some of the other tyres on the market and a company that three years ago you wouldn’t have even looked at has started producing some reasonable lap times on UK circuits. It had just released a new tyre that was getting good reviews so I decided to give them a try – they were cheap and the exact size I needed so seemed worth a punt. When they arrived, though, the first thing I noticed was their weight – way heavier than the Cup 1s.

So with the new taller tyres I then looked at the spring rates, it was quite a nightmare to work out as KW didn’t know exactly which springs were on my car, but when I was talking to it I did glean a great piece of information on the markings you find on European-made springs. I’ve always worked in pounds and find it hard to get my head around kilos and Newton meters, but this tip from KW has allowed me to work things out nicely.

I decided I wanted to go softer but KW could only supply 50lb softer at the front and 70lb softer at the rear. I thought was too soft so I decided to get some custom springs from a company called Faulkner Springs who manufacture bespoke springs. I gave them the lengths, inside diameter and what rates I wanted in lbs and they arrived three weeks later. 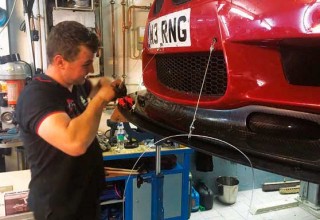 Armed with new tyres and springs I was ready to go back to the ’Ring, build the extended splitter and try again. In true last-minute motorsport fashion I arrived at the ‘Ring two evenings before the last Destination Nürburgring track day of the year with all these jobs to be done on the car. At 8am the day before the track day we started on the list of jobs. The springs fitted a treat and while I was there I bumped into a friend, Luke, who offered to loan me a secondhand set of slicks on rims to try and dial out the understeer.

The splitter was a bit more of a challenge as I didn’t know if it was going to work or if it was going to destroy itself once we got it on the car so we got some 6mm plywood and made the splitter from that. We also took it back under the car to between the front wheels to try and add some aerodynamics under the car. This is something that needs to be addressed for greater downforce but we won’t get into that today…

The hardest part about fitting a splitter is how to keep it off the floor once you’re at 150mph – I have seen beautiful carbon splitters get destroyed because there wasn’t sufficient support to take the load.

My friend Beat had pre-ordered some wire and fasteners so we had the parts needed to attach the splitter and make sure that as long as the front bumper doesn’t remove itself the splitter won’t be coming off! Again it’s quite crude to look at but it’s just for development and it will be remade over the winter with something a bit more aesthetically pleasing to the eye. So, springs on, wheels and new tyres on and the splitter installed there was just the geometry and corner weighting to do. We’d raised the ride height about 5mm as the softer springs let the car sit lower and as a result it took the best part of a whole evening to get it right. I got back to the hotel at about 10pm and headed straight off to bed anticipating the following day’s track day.

Once on track the car felt instantly better – a lot softer and more compliant and not jumping around all over the place. It seemed to absorb the bumps a lot better and smooth the track out, but wasn’t so soft it felt like a boat, this was excellent! I pulled in after a couple of laps and dropped the tyre pressures and went out again, and after another couple of laps I upped the compression on the dampers front and rear as I was starting to push the car and wanted a little more damping to keep it from rolling in the fast corners. All was feeling good and on the fast stuff where I had been getting understeer before at high speed the splitter and springs were working a treat and the car felt amazing and easy to drive. However, after a short while I started to get the tell-tale screeching and squealing from the front tyres that the understeer was returning. I tried altering the suspension settings – both harder and softer – but to no avail. It seemed like the tyres were the problem – they were fine until you really started to push and then they were giving up on me. 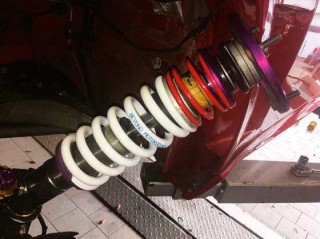 I was a little frustrated at this point and pulled in at the T13 pits where a couple of my friends were. It just so happened that the tyre manufacturer of this new rubber was there testing and as soon as the team there saw me and the car they came over and asked what I thought. When I told them of the problems I was having and that I was going to try going on to slicks they gave me another set in a different compound to try. I also had a chat with some of the test drivers and they said the same as what I was thinking – their current tyre wasn’t very good. I went and got the tyres changed over and the same thing happened – as soon as you start to really get on it they give up. It was pretty busy in the afternoon and we had a long track closure and before I could get a clear hot lap in the day was over!

The second day I wasn’t messing about so I put the slicks straight on, gave the other tyres back and set out to have some fun and try and get some laps down. I took a little while to get the tyres up to temp and get used to them as they have a very different feel to semi-slick road tyres. With the extra grip from the slicks the car was creating some roll in the high speed corners – not masses but it would be nice to dial that out.

I had three attempts in the afternoon at really getting a good time – trying to get under 7.30 from Bridge to Gantry – but sadly that didn’t happen. There was so much traffic and so many crashes with yellow flags and sections cut off with cones it was a complete waste of time I may as well been in a Mini – I probably would have been having more fun!

Anyway, that was the end of this year at the Nurbürgring. I took the car home and tucked it up for the winter. I’ll be doing some testing in November to try and get the tyre situation sorted before next year’s track time at the ‘Ring! I’m looking forward to it already!