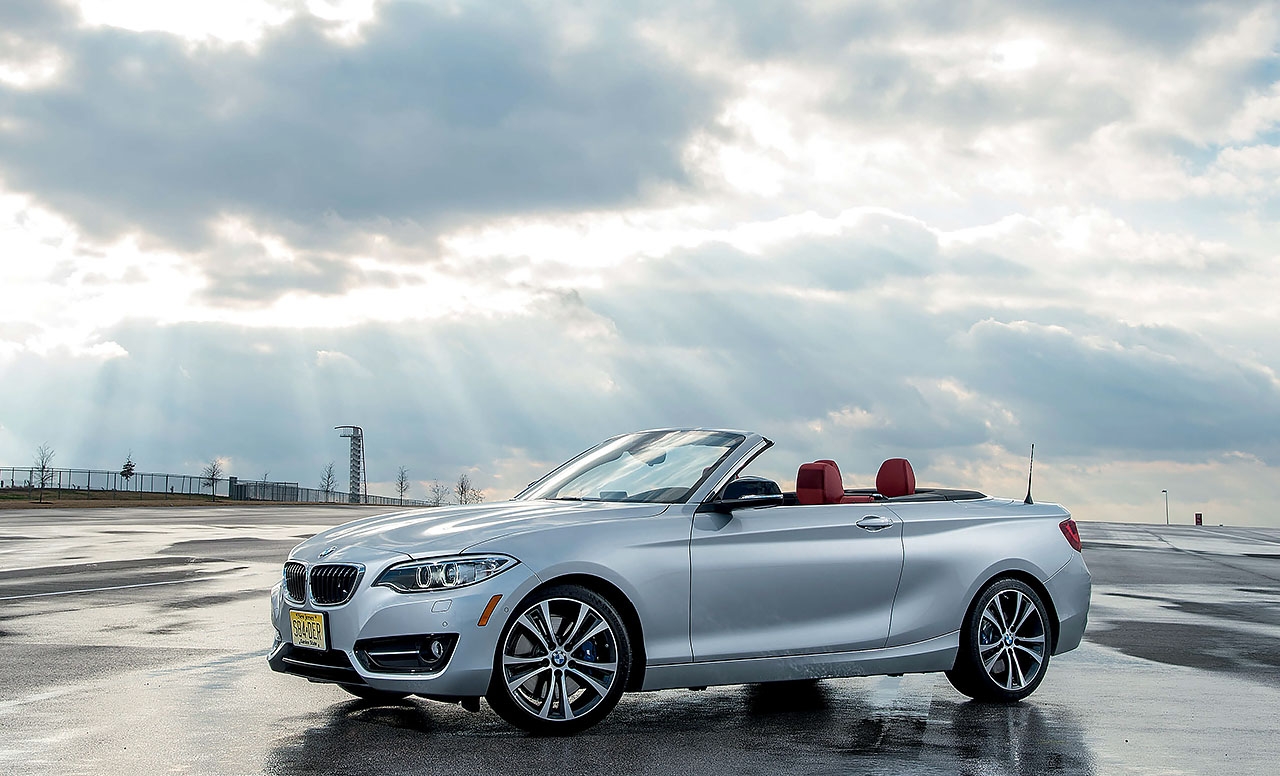 At first glance, its cute looks and pert proportions will cause many to coo over the new 2 Series Convertible when they see it for the first time in a BMW showroom, but there’s a lot more to the baby open-top of the line-up. As with its predecessor, the 1 Series Convertible, it is the only rear-drive convertible in the segment so ostensibly it’s for the keener driver – even if cabrios still come with the ‘hairdresser’ stigma in this part of the world. That’s not the case all over the planet though, and BMW must be doing something right, as it sold 130,000 examples of the 1 Series Convertible, which is more than any competitor in the compact premium convertible segment managed. And BMW is reinforcing that sporty reardrive image in the 2 Series by offering the new Convertible in M235i guise, making it the first ever open-topped M Performance Vehicle. Rumours suggest there may even be an M2 in the pipeline… 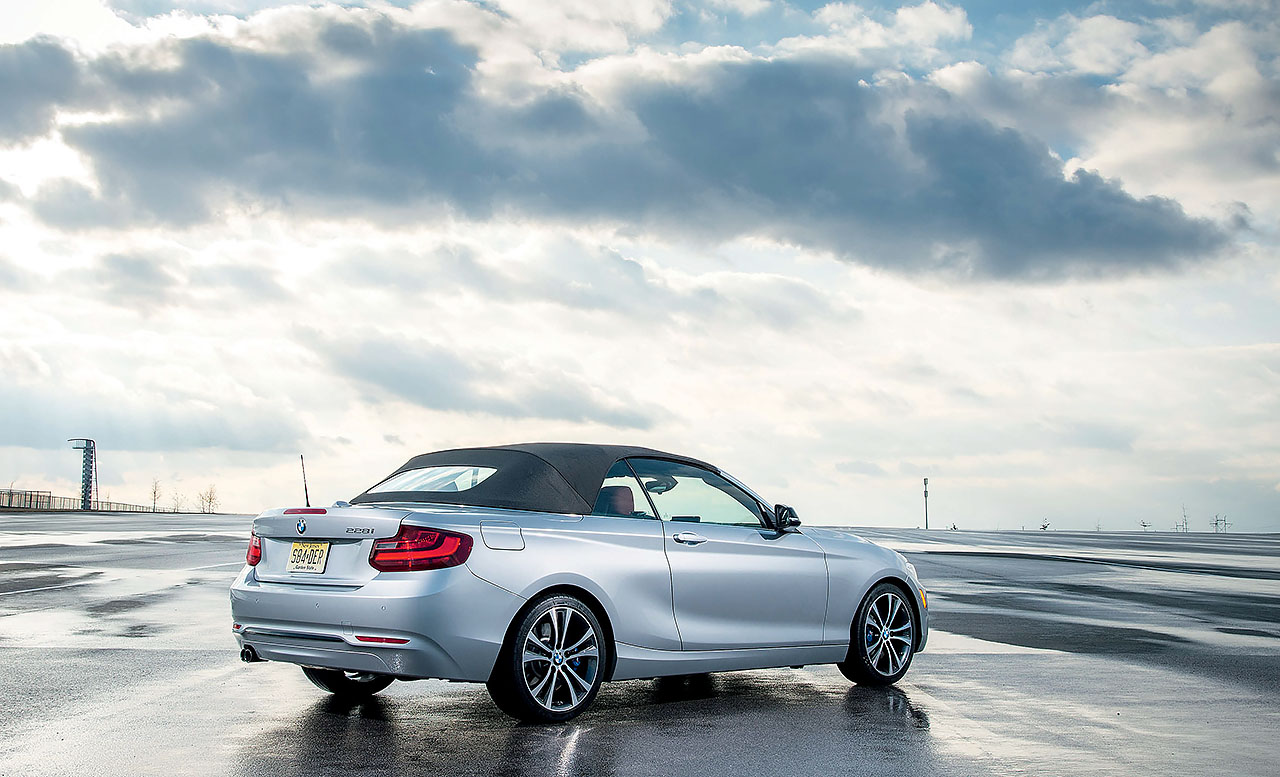 No matter what your opinion on convertibles in general it’s difficult not to be charmed by the looks of the new 2 Series Convertible, even in the restrained finish of the Sport model wheeled out for the launch in the US (the 228i won’t be available in Sport guise in the UK, only as M Sport). Gone are the awkward nose and side sill styling details and in their place is a model that at once looks pretty and elegant. The cheeky face fronts a long, pronounced shoulder line that runs all the way around the car, and it looks even better with the soft top folded out of sight behind the rear seats. The new proportions are no trick of the designer’s pen either, as the 2 Series Convertible has grown in comparison to the 1 Series. It’s now 72mm longer (with 30mm of that in the wheelbase) and 26mm wider overall. Improving its stance further are wider front and rear tracks – by 41- and 43mm respectively.

While these changes help with the car’s appearance they also enhance its practicality. Presumably, rear seat space is improved, but it’s still cramped back there so best to think of it as extra luggage space – especially as you’ll want to fit the wind breaker to reduce in-cabin buffeting. Saying that, the boot has been enlarged. With the roof up it’s 30 litres larger than before (holding 335 litres) and even with it folded there’s a usable 280 litres of carrying capacity – 20 litres more than in the open 1 Series. As before, the rear seat back folds down to reveal a through-loading aperture, but it’s been enlarged. Apparently two golf bags will fit in there now. BMW is also proud of the reduction in noise in the cabin with the roof raised. Putting it up takes about 20 seconds and can be done at speeds of up to 30mph. Buyers can specify anthracite or brown ‘with silver effect’ for the roof if they want something different to the standard black canvas.

Although the 2 Series Convertible looks its best with the roof down, all four windows retracted and wind breaker hidden out of sight, it’s also at its windiest then and once you go above 30mph you’ll quickly be reaching for the window switches and tugging the wind breaker into place. In that guise motorway speeds are comfortable enough and buffeting in the cabin is kept to a minimum. That aside, the car’s composure stands out at higher speeds. BMW quotes an improvement of 20 per cent for the torsional rigidity of the body over the 1 Series Convertible and the structure must be a stiff one, as it feels every bit as solid as the 2 Series Coupé on the road.

Even on poorly surfaced roads the Convertible felt surefooted and rigid, with no obvious unwanted flex in the body. It feels light of foot too, nonchalantly stringing corners together, whether they’re high-speed sweepers or tight and twisty bends with a sprinkling of dust on the road. The steering is alert and relatively feelsome and there’s real agility to the chassis. Whisper it, but this car feels more fun and engaging than its big brother, the 4 Series Convertible. That’s despite its nigh on two-tonne weight. Admittedly the test car was fitted with the optional adaptive damping system, which allowed us to choose between Comfort and Sport settings depending on the road surface, but it bodes well for the car’s capabilities. The Sport mode made things firmer, but not uncomfortably so and we only felt the need to switch back into Comfort guise when the road got particularly coarse. In both settings the body control was good.

British, EU, USA and Australia buyers can initially choose between 220d and 220i models in Sport, Luxury or M Sport specifications, though the entry-level SE trim level will come on stream in time, while the 228i variant is available in M Sport guise only as mentioned above. Standard on the Sport cars are alloy wheels, climate control, keyless ignition, sports seats, a leather multifunction steering wheel and the Driver Performance Control toggle switch. Luxury versions get larger wheels, chrome detailing, ‘Fineline Wood with Oxide Silver’ accents inside plus Dakota leather upholstery. Apparently the 2 Series Convertible will be the first BMW to come with the option of ‘over-theair’ satellite navigation updates via the car’s builtin SIM card too.

The M Sport specification adds more distinct styling updates inside and out, including a wider kidney grille up front and M Sport suspension. Buyers can upgrade this further with the M Sport Plus package, featuring Ferric grey 18-inch alloys, Xenon lights, M Sport brakes, a Harmon/Kardon speaker system and a few other bits and pieces. The range-topping M235i has its own specification too, as it does in the Coupé line-up. Other than bespoke styling items, the M235i Convertible also adds 18-inch wheels and dualzone climate control, plus of course its 326hp turbocharged six-cylinder petrol engine.

In 228i auto guise the 2 Series Convertible is effortlessly quick, but as we’ve said before about this 2.0-litre turbocharged unit, its flat torque curve (258lb ft produced all the way from 1250- to 4800rpm) disguises the pace so much that it can feel, well, flat. The chassis makes light work of the 245hp peak power too and never feels unruly. At normal speeds the engine is quiet and remote and doesn’t even sound that good, but it comes alive at higher revs and with the roof down it makes a pleasing growl as it approaches the redline. As ever, the eight-speed automatic gearbox is a gem and its dual-personality that allows rapid upshifts one minute and smooth cruising the next really suits the 2 Series Convertible. While the automatic transmission costs more to buy, it also results in a more efficient car, no matter which model is chosen.

If economy and efficiency are high up your list of priorities the 220d Convertible is worth a look. It returns 60.1mpg on the combined cycle and emits 124g/km (64.2mpg and 116g/km with the auto), while being quicker in a straight line than the 220i model – and its 295lb ft torque figures is only bettered by the M235i version. Going on sale at the end of February, prices start at £29,180 on-the-road for the 220i Sport Convertible. That starting price will drop further when SE models are introduced, but it represents a circa £3000 premium over the 2 Series Coupé, which is saucy enough, but the equivalent 4 Series Convertible is more than £7000 extra again. Sure, the bigger car comes with added gravitas and status, but we reckon the 2 Series Convertible is a much sweeter car to drive. It’s also less assuming and less grandiose, which suits us just fine.