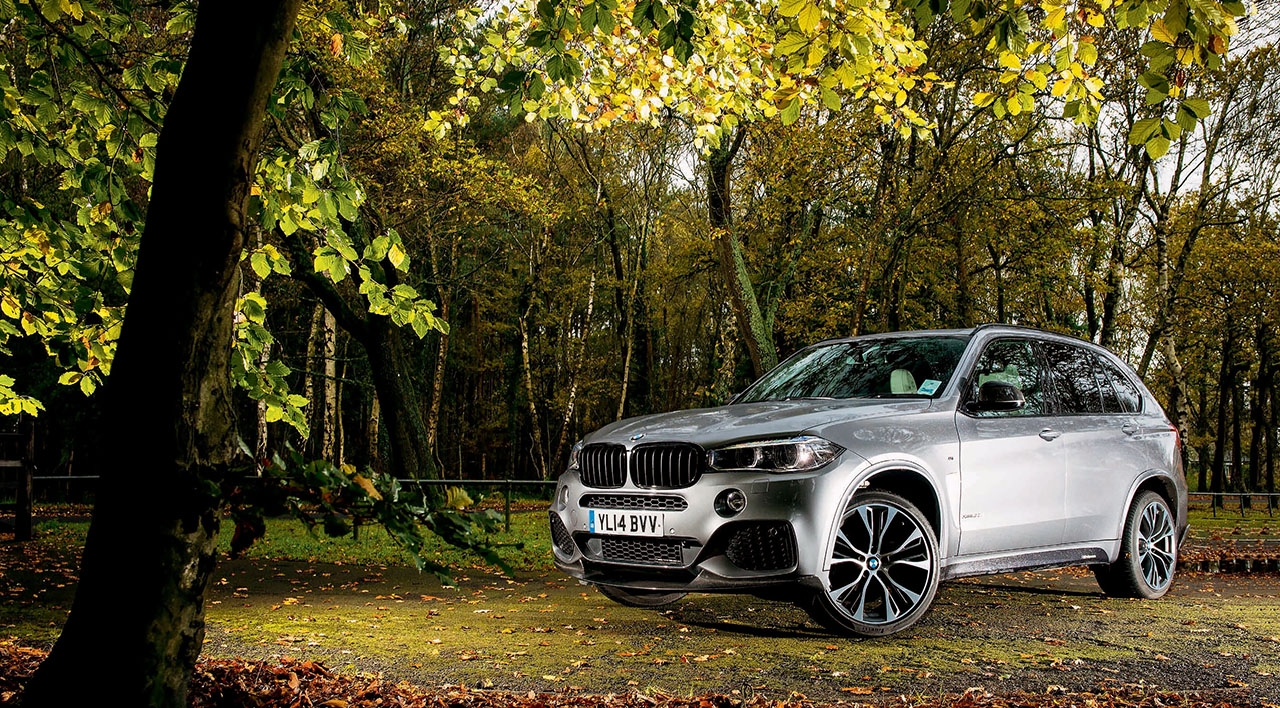 The High Life. Taking a look at the M Performance range for the current 2015 BMW X5 F15. The X5 is no sports car but that hasn’t stopped BMW from designing a set of M Performance accessories for the big 4×4. Words: Simon Holmes. Photography: Dave Smith.

Since their creation some years ago, the SUV (or BMW-named SAV) market has become somewhat synonymous with a certain kind of branding and image. Aside from the Chelsea tractor stereotype, these large and luxurious cars with their stylish looks posses huge road presence and back it up with strong performance from powerful engines. It helps create a bold image and it’s reflected with a bold price as even the basic X5 now costs well over £40,000, which is certainly no pocket change.

But for those looking to make their recent X5 purchase stand out a little more, BMW has put together an M Performance range of accessories to complement the already pronounced looks of the current version. In M Sport guise the F15 X5 is undeniably a muscular-looking thing, particularly from the front with its great big nostrils, frenched foglights, large angled headlights and huge air intakes. Then there are the air vents in the wings and swollen arches that give that strong shoulder line, finished off with a prominent posterior featuring those large exhaust cut outs either side of the bumper. But whilst it’s a relatively handsome beast, the M Performance parts are subtle yet meaningful enough to add a little but gain a lot.

This example is fitted out with the full aerodynamics package made up of several pieces. At the front there’s an angled lip spoiler fitted to the lower front bumper section that works with the existing lines to create a more aggressive look whilst not looking too imposing. It doesn’t protrude too far and although it’s quite aggressively angled it’s actually been tested with the lower leg crash test, meeting all legal requirements for pedestrian protection, which is nice to know. It’s also made from high quality carbon fibre with a gloss finish and the weave is flawless.

At the rear there’s a very subtle roof edge spoiler above the window and lower down is a diffuser, again finished in good quality carbon fibre. It’s a simple but nicely sculptured piece of design that fills the void between the exhaust exits well, broken up by the vertical bars in the centre. These are positioned so to allow a tow bar to still be utilised. The diffuser centre section is also joined by the catchily named ‘Aerodynamic Package tail lift flaps’ that poke out from either side of the rear bumper. These small, spoiler flick ups are separate from the diffuser itself but whilst I really like the subtle centre diffuser I’m not quite so convinced by the tail lift flaps. Finished in carbon fibre they do look purposeful but whether they are or not is unclear. However, BMW does stipulate that the front splitter is only fitted in conjunction with the roof edge spoiler. This suggests these items do actually make a small difference to the car’s aerodynamics and therefore require each other’s benefits to balance out as they do on other models. 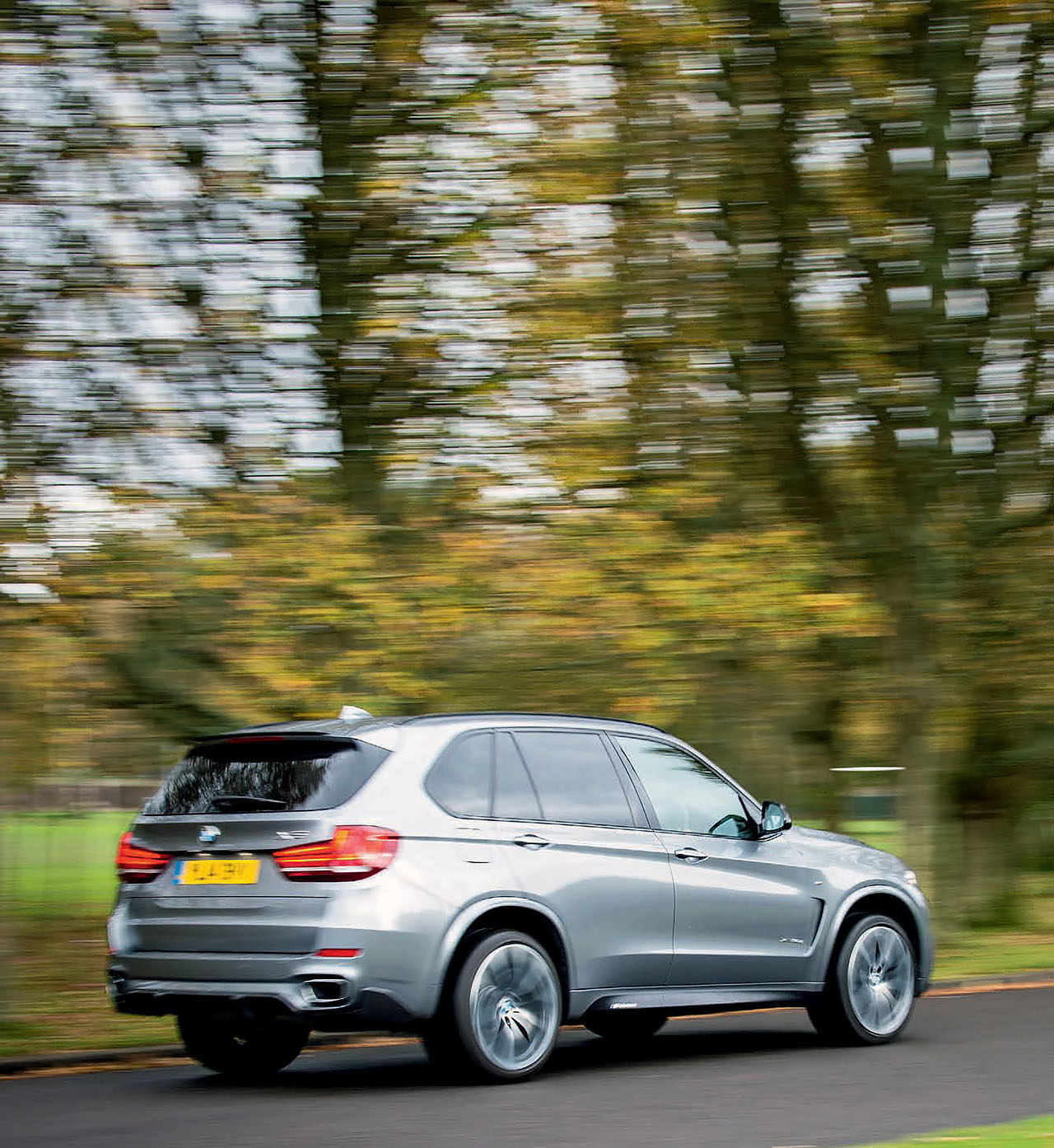 To complete the aero package there are the matching carbon side skirt films, which run along the bottom of the sills to tie the front and rear sections together, though this is purely for appearance. Here they come fitted with the optional M Performance graphics, but again, I’m not quite convinced by these, as they don’t seem to match the rest of the car’s high class look and feel.

That concludes the larger parts of the kit, but there are also plenty of smaller additions that contribute to the overall look and feel of the car. The gloss black kidney grilles make a huge difference as the M Sport comes with Shadowline trim as standard, meaning the original grilles are virtually the only chrome trim to be found on the car. Also fitted are the carbon fibre wing mirrors caps, which feature the same high quality weave found in the splitter and spoiler, thus tying in nicely with the theme.

Last of all, the body styling additions are finished off superbly by those M Performance wheels. The M Sport usually comes with more than adequately sized 19-inch wheels (with a 20-inch option) but here they have been replaced with wheels measuring a slightly absurd sounding 21-inches in diameter. They look huge and the thin, polished silver spokes against the darker grey spokes behind them seem to make the wheels appear even bigger than they are. They’re not just tall but wide, too, measuring 10-inches at the front and a monstrous 11.5-inches at the rear, requiring suitably huge 285/35/21 and 325/30/21 tyres. The Pirelli-supplied rubber is still run-flat, but despite that and the tiny, rubber band look to the side profile they provide a decent ride that seems no different to standard. Inevitably, the bigger wheels do raise the car slightly, giving the already large X5 a truly dominating presence. You can certainly see it coming up behind you anyway. The increased rubber-to-road ratio also improves corner stability, although again, this seems minimal compared to the already sure-footed M Sport X5.

When it comes to the price for all of these parts then there’s no denying some of it isn’t exactly cheap. The total for all these extras is £8978 and that doesn’t include the fitting, which BMW quote is around three hours labour. As you might expect, the wheels take up the biggest chunk of that total at £5150 whilst the front splitter and matching rear roof spoiler together are a reasonable £1327. But bear in mind the cheapest BMW X5 M Sport 2015 is nearly £47,000 and the 3.0d model we have here is well over £50,000, so upgrades were never going to be pennies. Although the M Performance decals on the side trims costing a whopping £116, seems a little steep. It’s worth noting that the popular BMW-supplied 20-inch wheel upgrade costs an additional £1200 from new, which is a viable alternative to the M Performance 21-inch monsters.

Overall the additions undoubtedly sharpen up the already smart exterior styling of the M Sport F15. The carbon fibre works well with the Space grey colour here although its subtle effects could be lost on darker coloured examples quite easily, but then perhaps that would suit some owners. On the other end of the spectrum, the additions would stand out far more on a white car and there will no doubt be just as many owners longing for that look. After all, these BMW SAVs do project a certain image…