Bavarian M is for Monstrous. The big bruiser is back; the new BMW X6M F16 has arrived and it’s every bit as good as we hoped. Purists may baulk at the fact that one of the range-topping M cars is based on the new X6, but few can argue with its credentials or ability Words: Shane O’Donoghue. Photography: Drive-MY.

We all knew it was coming, but there’s still something shocking about the arrival of an all-new edition of the X6 M. However, it seems there’s enough demand around the world for such a car to justify a second coming. On the BMW stand at the Los Angeles Auto Show late last year, where it and the X5 M F15 made their world debuts, its proportions were skewed by harsh lighting and the crowds baying to get a closer look. After all, the USA is the biggest market for BMW X models and also for BMW M. No surprise then that we’re back in the States for the first drive event and under the warm Texan sun the X6 M suddenly looks very big. 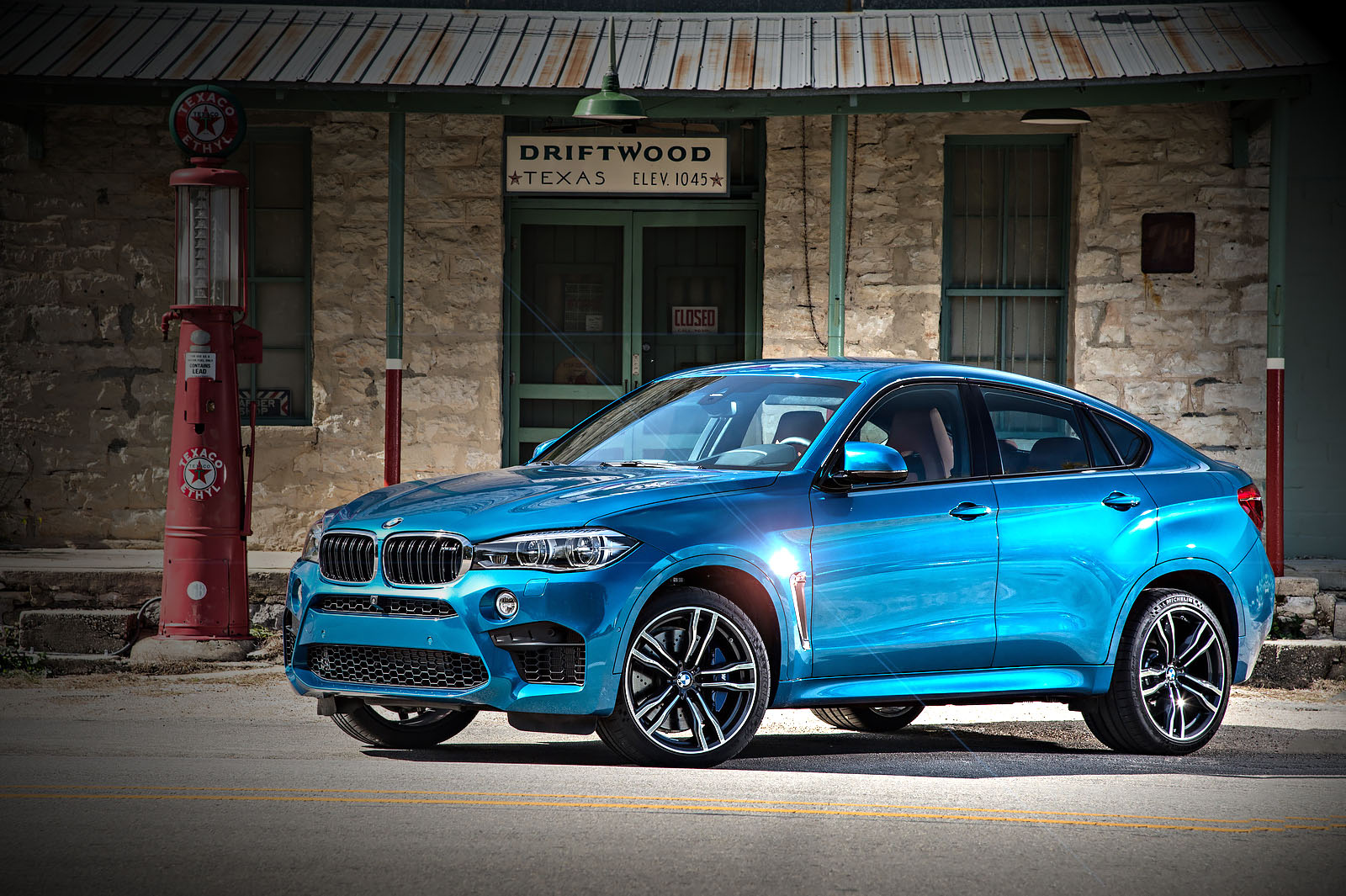 Aptly, the launch cars are all painted in Long Beach blue metallic, one of the two new exclusive M paint finishes (the other is Donington grey metallic) and it’s incredibly shiny and reflective when it’s sunny out. One observer wondered if that is to distract from the bulky design of the car itself… The regular X6 divides opinion as it is; the X6 M starts arguments and could cause friends to fall out. BMW boasts about the exterior being painted fully in body colour, but this only serves to accentuate how much body there is to paint and it’s particularly noticeable at the rear, where the new boot spoiler, chunkier bumper with its diffuser and the quad exhausts try their hardest to distract your eyes. This car really needs the optional 21-inch alloys (as pictured) to look at its best, despite a 10mm drop in ride height from the standard car.

Many won’t like the side view any better, with its contrived rear haunches and long overhang behind the rear wheels, but it at least looks in proportion from the side. We have no issues with the styling from the B-pillar forwards, which is classic M in its detailing of the characteristically aggressive X style.

The nose is dominated by a smattering of air intakes and the new-look headlights give the X6 more attitude than before. Those air inlets aren’t just for show either, as the X6 M F16 features an advanced new cooling system to control the temperature of a range of items – including the two turbochargers, front brakes, transmission, charge air and the engine itself. BMW’s engineers are particularly proud of the fact that this 2.3-tonne behemoth can be caned around a hot track all day and all systems will remain at their optimum temperatures.

They paid more than lip service to this too, by letting us loose on the Circuit of the Americas Formula One track, with nothing more than an ex-F1 driver ahead to pace us. Clearly this is not the natural habitat of any large SUV, even one breathed on by the mighty BMW M division, but it did allow a quick and safe environment in which to assess the full handling capabilities of the X6 M. Quick being the operative word, as, even on a wide and smooth F1 track, the X6 M has the ability to silence even the most talkative of passengers. BMW quotes a 0-62mph time of 4.2 seconds. Putting that into perspective, the M4 Coupé, fitted with the quickthinking M DCT gearbox, is only 0.1 seconds faster.

No doubt the traction afforded by the xDrive fourwheel drive system helps to negate the considerable extra weight the X6 is carrying around.

Saying that, the X6 M is also endowed with the most powerful of all the BMW M engines right now. The core unit is the same 4.4-litre V8 as that in the current M5, but it has been updated so peak power is 575hp (produced from 6000- to 6500rpm) and maximum torque is quoted as 553lb ft. Not only does the latter figure better the mighty triple-turbo X6 M50d’s, it’s available across a wide plateau – from 2200- to 5000rpm – and it’s ten per cent higher than the previous X6 M managed. It’s no wonder the engine shrugs off the weight of the X6 with such impunity. At seemingly any speed, floor the throttle and it reels the horizon in with increasing alarm – and noise. As in the M5 this V8 is best heard from outside the car (or through a long tunnel with the windows down), but there’s no doubting its intent as it growls and roars towards the redline, accompanied by audible whooshes from the two turbochargers. Melodic: no. Serious about its performance: very much so.

Unlike the M5, the X6 M employs BMW’s eight- speed Steptronic automatic gearbox, but it has been tweaked to operate in a similar manner to the dualclutch transmission fitted to most M cars. Hence it has the same stubby little gear lever, variable settings for the calibration and tactile gear change paddles behind the chunky leather M steering wheel. At a cruise it’s silky smooth as in any other BMW application, but it can do the whole violent highspeed gearshift on a full throttle thing too if required and it’s nigh-on perfect. The high gearing helps improve the official fuel economy figures and there’s a launch control feature. Presumably that wasn’t employed when the 25.4mpg combined economy was recorded… For the record, after two six-lap stints on track, we averaged less than 10mpg.

For the first few laps the X6 M felt utterly composed. The speed of it (and the track) required concentration, as you’d expect, but it’s a docile car to drive quickly, much more forgiving than any of the rear-drive M cars. The body control is simply astounding, thanks no doubt to the standard Dynamic Drive roll stabilisation system. Under hard acceleration it doesn’t squat noticeably, and likewise, when hauling the car down from nearly 150mph on the longest straight, the front end doesn’t dive significantly. The brakes are potent too and though not carbon ceramic in their construction, they cope admirably with the weight of the X6 M and the pace of this fast circuit. Even after six laps the stopping power is still there, though the easy-to-modulate pedal did soften a tad. The discs themselves are a compound design, drilled and inner-vented all-round.

The distinctive blue brake callipers are a six-piston fixed design up front and a single-piston floating item at the rear. Despite a 1.6kg weight reduction in the brakes (over the previous X6 M), BMW says that the front brake lining surface area is 50 per cent larger than before, which explains the stopping power. Unsurprisingly, it’s the tyres that give up the ghost first. Michelin Pilot Super Sport UHP tyres are standard fit, and they seem perfectly fine on the road (other than a lot of noise on certain surfaces), but it’s clear that they’re not up to sustained periods of track work under a car as heavy as the X6. Before they overheat, the X6 M makes a good fist of turning into the tighter corners, dealing with the wicked direction changes and even letting the driver trim the line by judicious use of the throttle through a long, long sweeping right hander. After a little practice – and with the middle DSC stability control setting engaged (MDM: M Dynamic Mode) – it’s possible to exit the tighter corners with a whiff of oversteer. The brave, foolhardy and those with a large tyre budget and an airfield to play on may even coax a power slide out of the car by turning off DSC completely.

None of that is advisable when driving on the public road, as the limits of adhesion are so high that you’ll be travelling way too quickly already. It just grips and goes. That’s not to say it’s no fun at all. While there’s little of the engagement and challenge to driving the X6 M as in some of the company’s best drivers’ cars, it’s still a hoot. The steering isn’t very communicative (and we found it best left in Comfort mode, as Sport and Sport Plus are just unnecessarily heavy), but somehow there’s always plenty of information coming through the chassis so you know what’s going on. Perhaps a little too much when all you want to do is cruise in comfort. It will feel like a big car to be hustling when it comes to British Broads though, regardless of its prowess and grip.

Many will buy it, not for that, but because it, along with its mechanically identical twin brother, the new X5 M, is the top of the BMW SUV tree. Hence the £93,070 price tag – nearly £30,000 more than the X6 M50d. That’s an awful lot of money, but in fairness, the X6 M feels like a high quality product. Even those that don’t fully appreciate the engineering effort gone into creating this car will have to admit that the interior is a bit special. It features all the usual M accoutrements, such as the multifunction steering wheel (with its programmable M1 and M2 buttons) and gearshift paddles, the M-specific instruments and menu items in the iDrive system, the aforementioned stubby gear lever and redesigned centre console, plus the X6 M door sill plates. BMW Individual items include the roof lining and leather-covered dashboard, but the standout feature is the gorgeous set of sports seats. They’re swathed in fine-grain Merino leather, feature contrast stitching and an embossed M logo in the backrests. The test cars featured full electric adjustment too, including variable side bolsters to accommodate drivers of all shapes and sizes.

The leather upholstery is featured in the rear as well, which offers decent space for three adults. On top of that, the rear seat back splits and folds 40:20:40 and the boot is, despite the sloping rear, simply cavernous. BMW quotes a capacity of 650 litres, expandable to 1870 litres with the back seats folded down. With no spare wheel under the boot floor there’s also a sizeable secondary storage area. As you’d hope for the range-topper, the X6 M is well-equipped as standard, specification highlights for it (and the X5 M) include cruise control with a brake function, front and rear Park Distance Control, automatic lights and wipers, dual-zone climate control, one-touch electric windows all-round, Enhanced Bluetooth voice control and 20GB hard drive-based infotainment with BMW’s Professional DAB and Professional Multimedia Navigation systems. The M-specific head-up display is also standard. You’ll be needing it.

At seemingly any speed, floor the throttle and it reels the horizon in with increasing alarm – and noise.

The X6 M’s cabin is as opulent as you’d expect in a nigh-on £95k SUV and there are some nice touches that add a bit of class such as the leather dash and Alcantara roof.