Exactly how far can you go when tuning a hot Audi powered by that celebrated 2.5 TFSI engine? Storm Developments made it its personal mission to find out with this TTRS, and we think you’re going to be pretty impressed with the results… 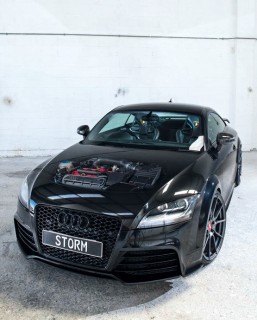 The recent RS-badged examples of Audi’s TT and A3 models have garnered quite a reputation for boasting one of the finest engine and gearbox packages of any sports car money can buy, regardless of what budget you have to play with.

Providing unrivalled levels of performance in even standard guise, things only get better when you let a tuning house put that warbling five-pot motor under the scalpel to extract even more fun from the winning setup, making it unsurprising that so many car enthusiasts are jumping onto the Rennsport bandwagon right now.

But just how much does this powertrain really have to give when you push things to the absolute limit? It’s something that big-power specialist Storm Developments near Reading was keen to find out when picking up this 8J TTRS as its next development car a couple of years back, proceeding to boldly go further than perhaps anyone else in the world in the months since. All in the name of research, of course…

“It’s obviously a great package, but we just didn’t feel like everything that could have been done to them over the years had been tried yet,” Storm Developments’ head honcho Andy tells us why this car was snapped up in the first place. “If we’re going to sell big-power kits to our customers, we have to practice what we preach and do our research, and it’s something we’d rather do with our own cars than someone else’s.”

It’s fair to say this poor TT was likely to be in for a pretty tough ride over the next few years, then, as Andy as his team got to work seeing just what it could take. If you read our feature on the firm’s equally-as-bonkers RS3 from Issue 42, you’ll already have some idea of Storm’s ‘Performance Packages’ it offers that utilise a bespoke range of uprated turbochargers and standalone Syvecs ECU systems to take things to the next level. Here, the team started with an ‘850’ kit and worked on it using forged engine internals, trick fuelling and meth injection solutions to help achieve such absurd headline figures.

“It was a difficult process that threw up a lot of unexpected hurdles along the way,” Andy is the first to admit, now confident the team has finally got a pretty solid package on its hand. With issues such as thermal management under the bonnet, as well as reaching the limits of the braking and gearbox capabilities, countless clever solutions have been implemented along the way to ensure the car doesn’t just perform well on paper, but retains all of the daily driveability you’d expect from the factory – no mean feat!

And the end result of all that hard work? The TT now pushes out a stonking 902bhp on E85 fuel, or a mightily impressive 810bhp on premium unleaded (you can easily switch from the two using the Syvecs computer’s self-adapting ‘flex fuel’ technology, too). “It currently holds what we believe is the world record for a 100- 200kmh time on a road-going TTRS, which it performs in 3.7 seconds,” Andy modestly adds – over a second quicker than it would take a Bugatti Veyron to deliver the same sprint. 0-60mph comes up in around 2.3 seconds, too with the car easily topping 200mph if given enough space to do so. Producing a package that allows you to achieve such blistering figures in such a reliable manner for less than £50k (and that includes the purchase of the car, too) is a proposition that seriously hard to ignore. Or you could always purchase a £150k Porsche 911 Turbo instead if you prefer, but even then, you’d still have trouble keeping up with this beast…

Andy is keen to stress that this is no drag strip pony (although he reckons it’d smash an eight-second pass at Santa Pod, in case you were wondering). Instead, Storm Developments has been keen to retain that usability we all love from hot Audis, and we think it’s worked…

“The motorsport traction control built into the Syvecs ECU is a great help in keeping things in check,” he explains, with four different modes available depending on what driving mood you’re in.

Still used as his daily driver and with various power maps dialled in, it’s clear this job has been performed thoroughly and is far more than just an exercise in big power figures.

Top: Ispiri alloys offer up a functional stance to the car’s standard curves.

While Storm Development’s 710bhp RS3 makes do with stock internals, Andy felt that when upwards of 900bhp was on the cards, it was safer to pop the lid on the TT’s TFSI lump and ensure things were strengthened up a bit inside. It was down to Tim at Gloucester-based Race Developments to prepare the fivepot for the onslaught of extra grunt, which he did by adding components such as Carrillo pistons and con rods, before treating the rest of the internals to a ‘superfinishing’ process.

A precise task that finely removes the tiniest outer layer from each part’s surface (with the aim of removing manufacturing surface marks and other imperfections), the end result offers up far closer tolerances and ultimately more strength and reliability to the engine as a whole. Unlike polishing which leaves a smooth, mirror-like finish, super-finishing instead leaves a cross-hatch pattern in its wake.

A full-frame, dual ceramic ball bearing affair, Andy tells us how each turbo it developed was designed using F1-levels of technology to ensure optimum flow when spec’d up with the complementing manifold and downpipe.

Storm Developments then reached out to Forge Motorsport to help concoct a monstrous front-mount intercooler that would help keep things as cool as possible along the way.

The extremely clever direct fuel injection technology that Audi has pioneered over the last decade or so has helped bring performance and fuel economy a very long way indeed. Problem is, this type of injection has a peak flow limit that it’s hard to do anything about once you’ve hit, meaning Andy had to think outside the box when extra fuelling was required here. A common modification for drag and race cars, the team eventually decided to add a second set of injectors to each cylinder, this time set up in a more old-fashioned, port-injected manner that now sees fuel being distributed both before the valves as well as after them.

To help manage the huge amount of juice the car slurps when under full load, a pump from none other than a Bugatti Veyron has been employed here, too.

One of the secrets in making the largest amount of power possible, the team knew early on that the car’s factory ECU could be a huge limiting factor of the entire build. It’s why they reached out Farnborough-based Syvecs to create a bespoke computer that would entirely replace the car’s factory unit. As well as raising the bar in terms of the performance it could keep in check, the unit also has some seriously trick features tucked away inside that help make it an even more alluring prospect.

Up to eight map settings, rolling launches, anti-lag and even adaptive flex fuel systems, to name just a few, now help the car become as versatile and driveable as possible in any situation you can throw at it

Syvecs has also helped out when it came to the car’s transmission software, too. “We were maxing out what the stock gearbox software could take – it was just far too quick for its liking!” Andy grins.

You know you’ve built a fast car when even a set of the very finest AP Racing Pro Race 5000+ calipers taken from a race car are struggling to keep up – as is the case here.

“We are currently weighing up what would provide us with better stopping power whilst not adding too much extra weight into the equation,” Andy reveals, the talk of ordering some killer carbon ceramic jobbies being bandied around the workshop.

Aside from some carbon trim parts and a couple of Storm Developments stickers, the Panther Black curves still remain surprisingly standard, ensuring the car retains optimum sleeper appeal when pulling up alongside more exotic metal at the lights.

Some forged Ispiri wheels do take pride of place on each corner, reducing unspring weight and supplying some much-needed clearance for the huge AP Racing brakes thanks to their 20in diameter.

The reserved styling continues into the interior, where everything remains largely stock aside from the removal of the rear bench and the introduction of two of the finest front seats we’ve ever seen fitted in an Audi road car. 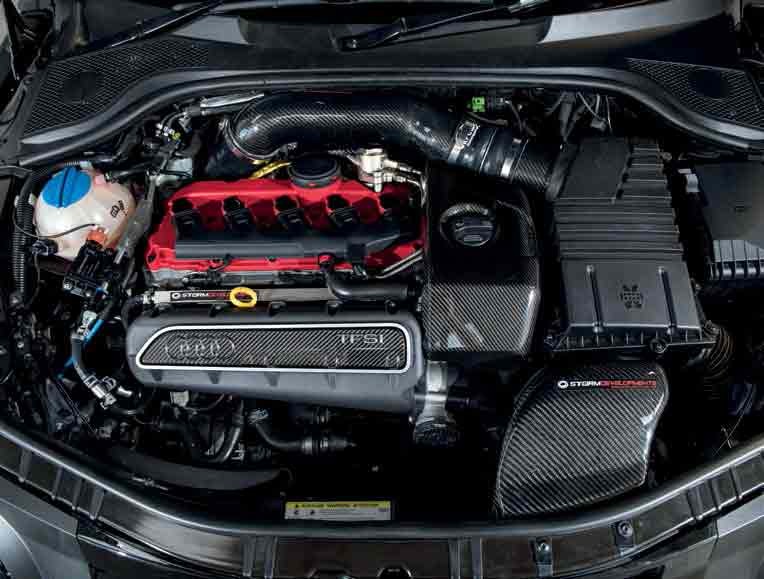 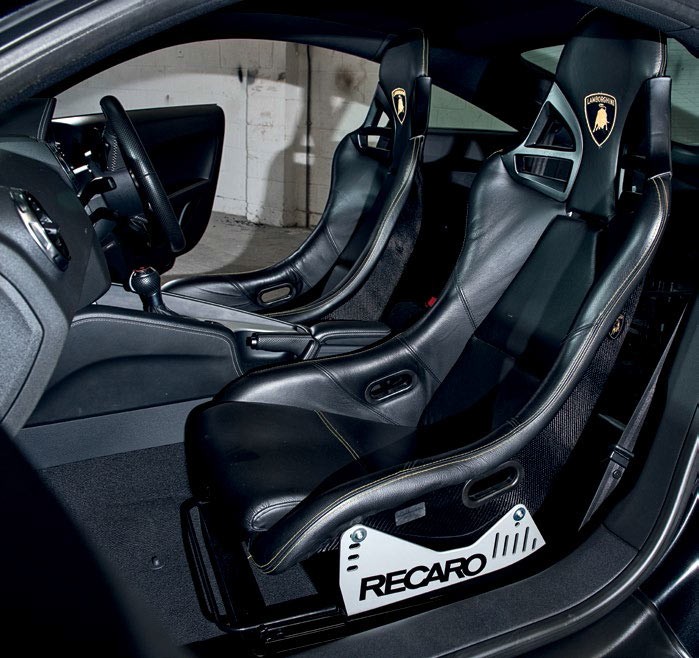 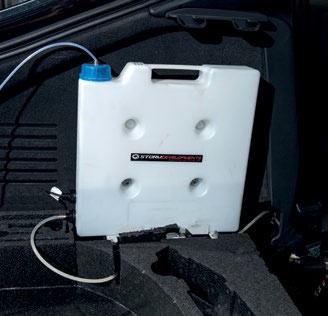 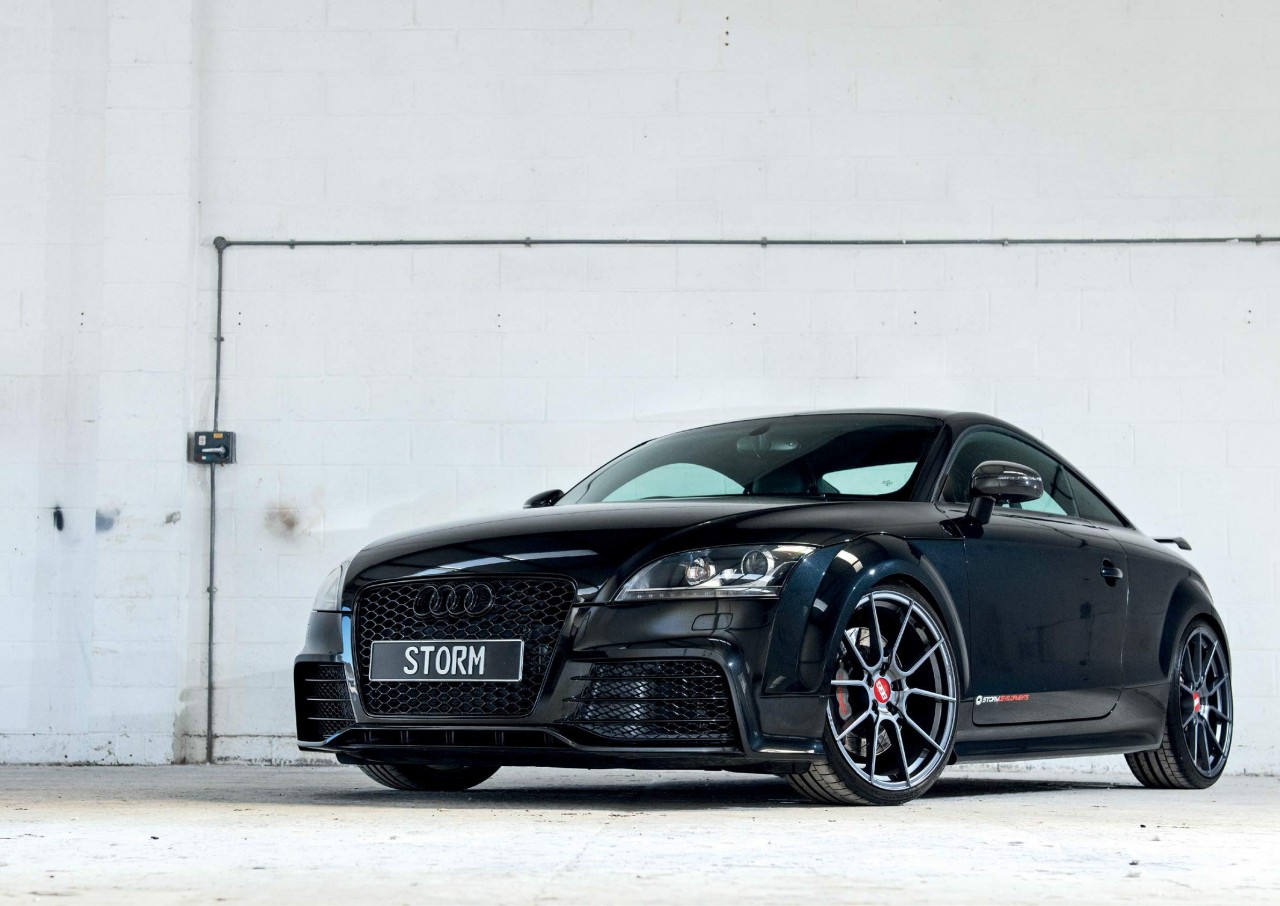 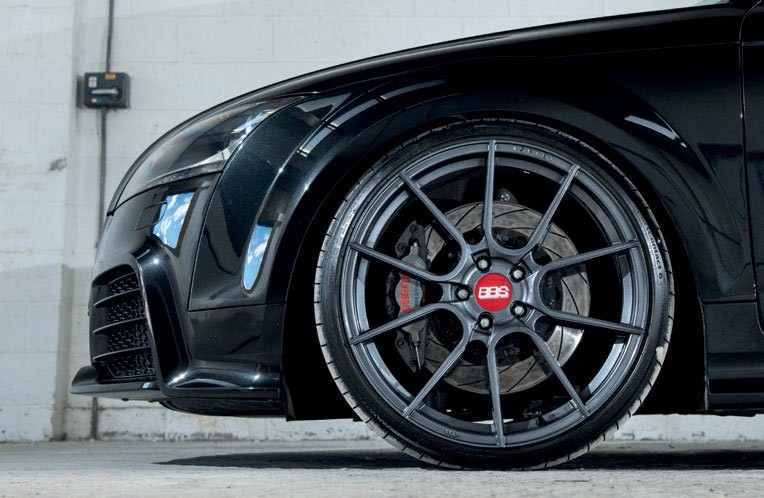 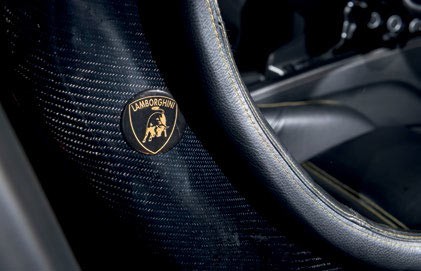 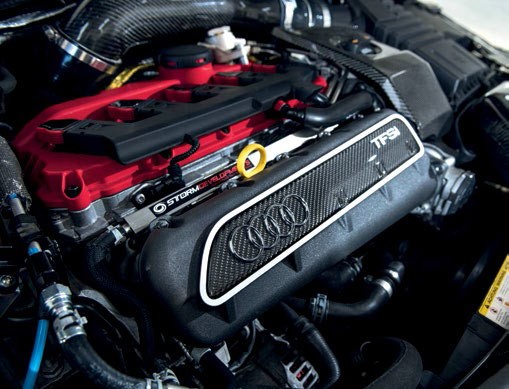 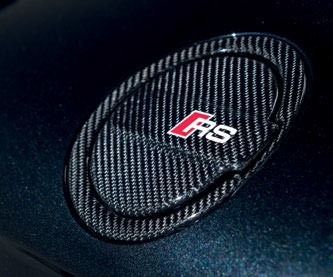 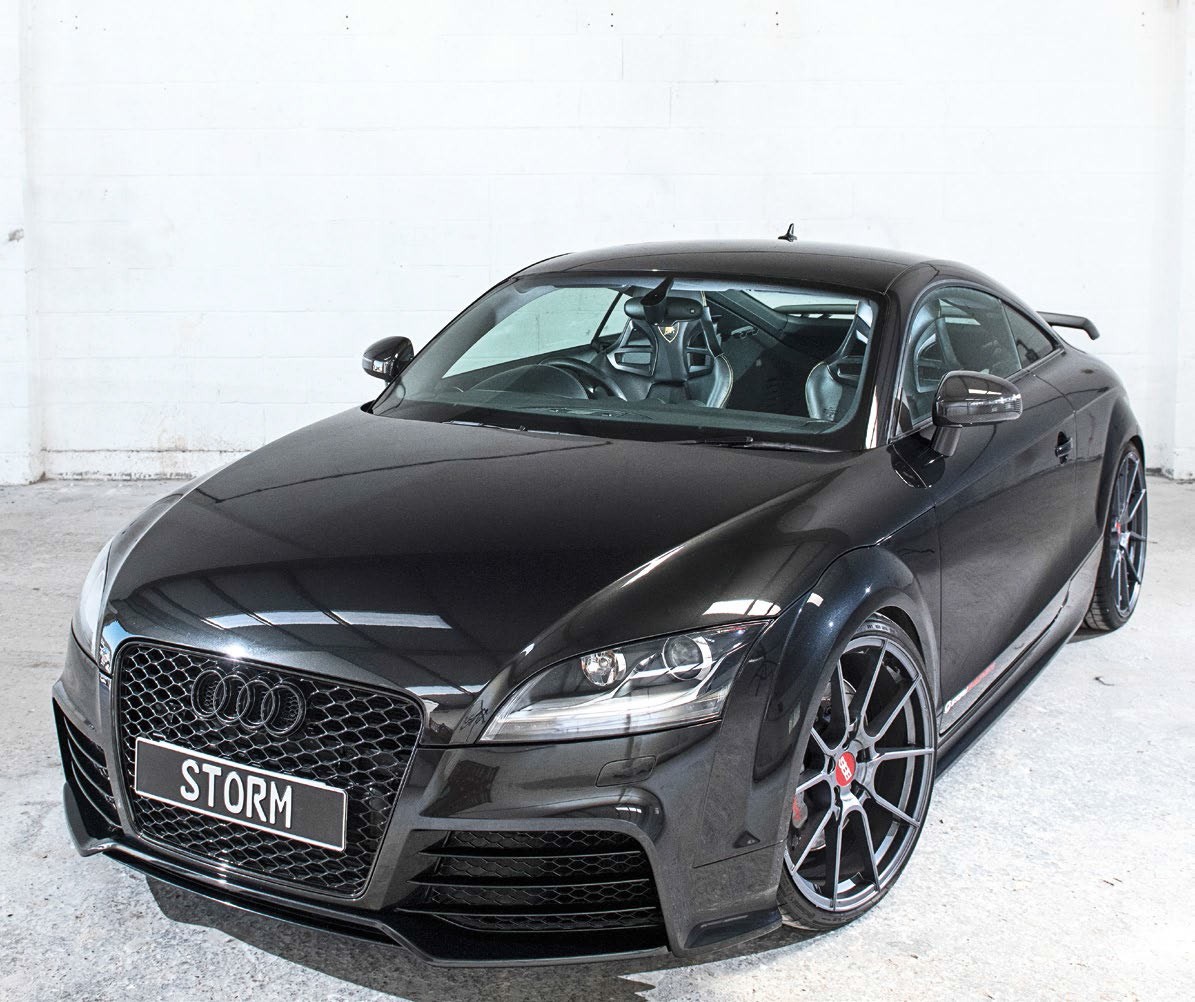 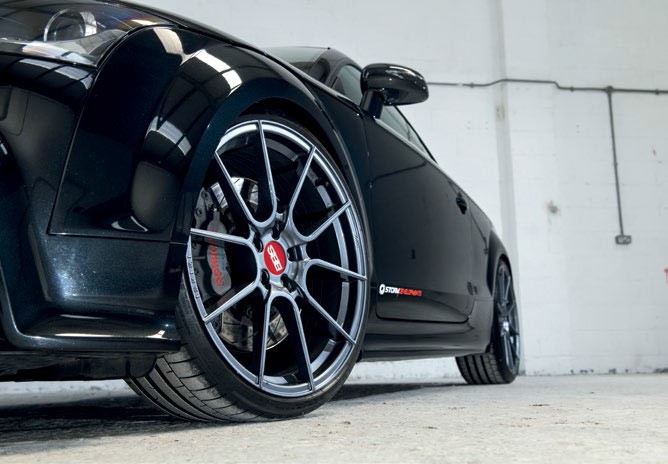 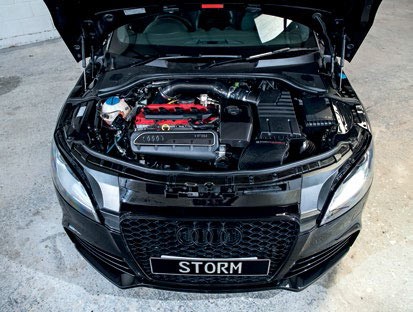 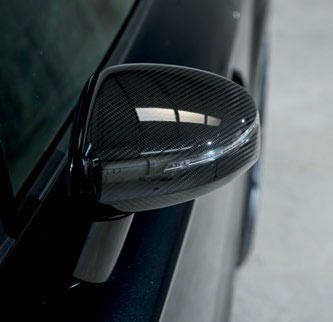 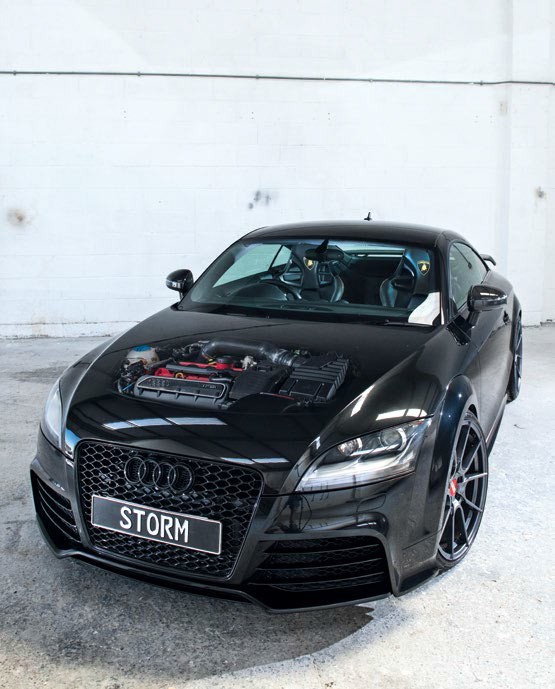 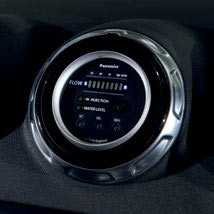 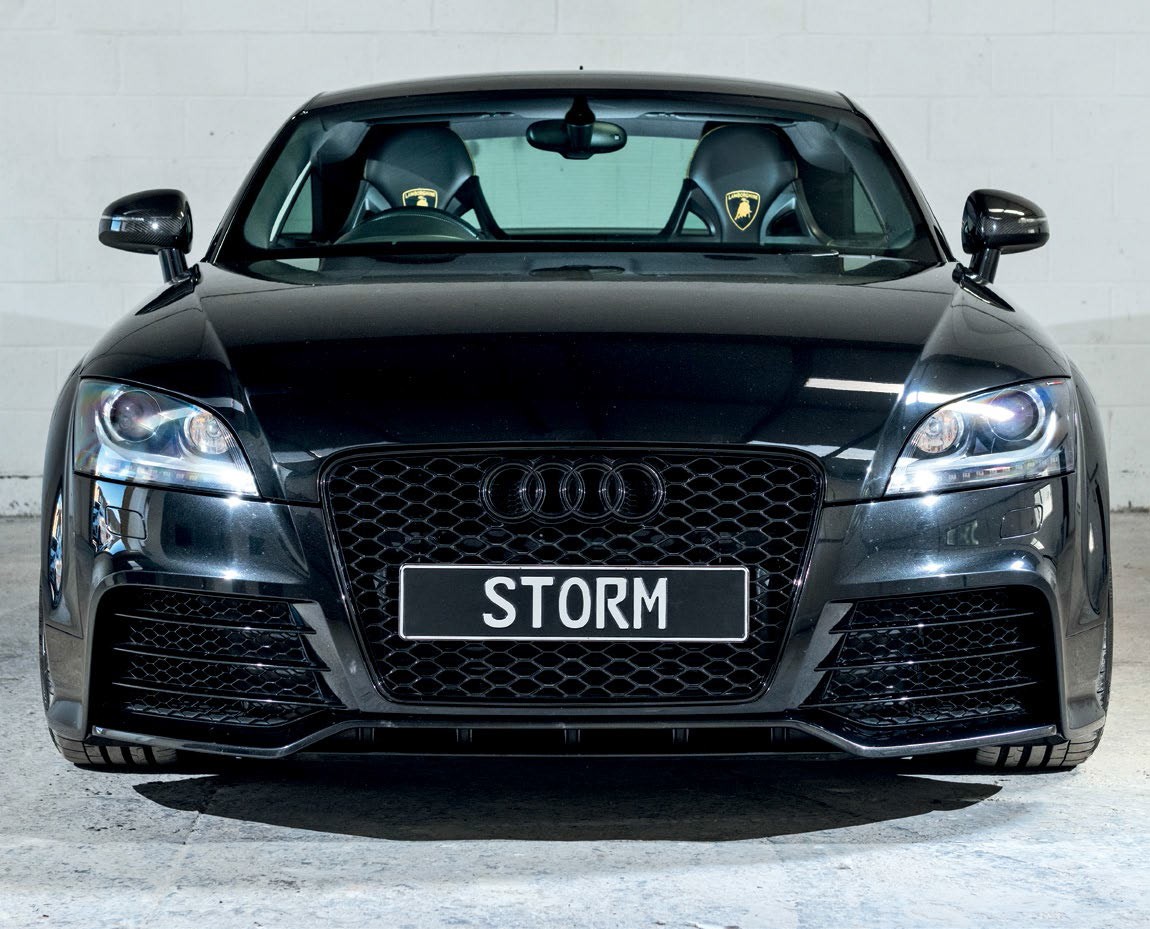 Created solely from carbon fibre, these fixed-back beauties come straight from one of the fieriest Lamborghini Gallardos the firm ever made – the racy Super Trofeo Stradale model. It’s a nice touch that not only continues to keep weight down but is also a nod to the TTRS’s informal nickname of being a ‘mini Lamborghini’ in tuning circles these days.