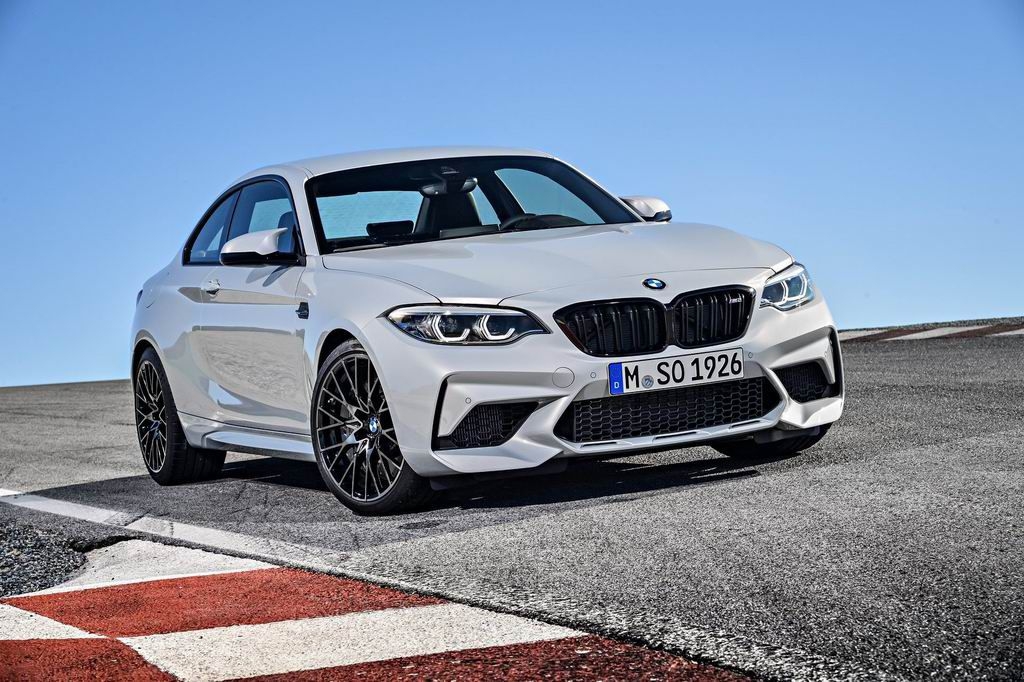 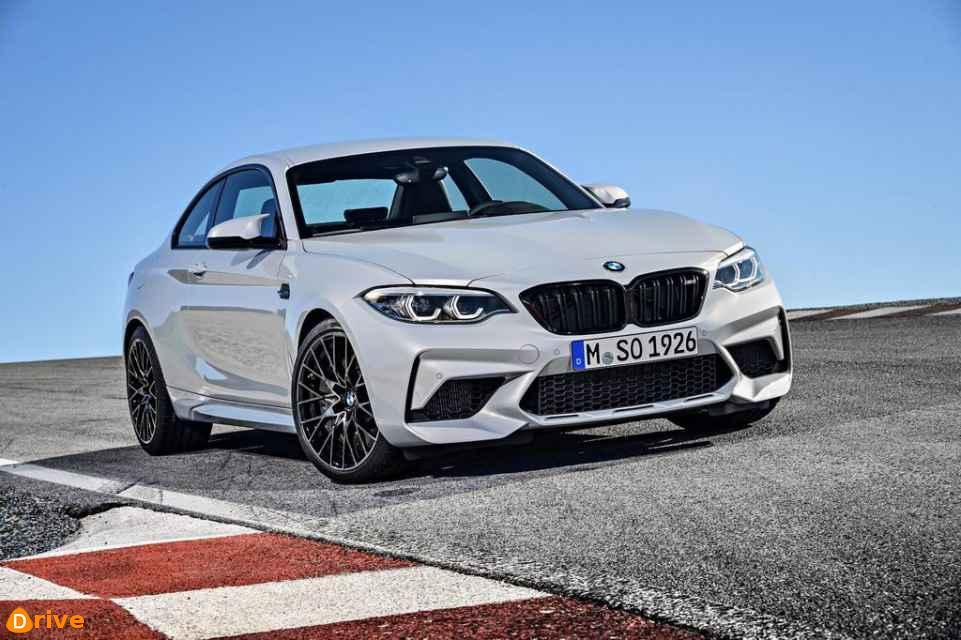 In usual M Division style, this isn’t merely a new body kit and wheels. The long-serving N55 single turbo is dropped for the S55 3.0-litre twinturbo straight six pinched from the M2’s bigger brothers, the M3 and M4. And while power and torque are up a significant 30kW and 50Nm over the base M2, the Competition doesn’t quite have the figures to match its bigger siblings. There has to be range progression, after all.

Combined with the quick-shifting seven-speed dualclutch, the M2 Comp gets to 100km/h from rest in 4.2sec (0.1sec faster than the 272kW/500Nm M2). Hit the red starter button, and then take a moment to listen to the idle speed, which runs at an elevated 1200rpm while the engine is still cold. Even though the 302kW unit is a melodic piece of kit, it doesn’t sound quite as vocal as its predecessor. “True,” admits ‘Mr. M’, Frank van Meel, “but we have a sports exhaust in the making which won’t disappoint.”

However, the time has come to finally drive away in the hyped baby M-car. And ours is the six-speed manual – its existence a factor the purists will love. The clutch is light, smooth and talkative. The ’box, too, scores brownie points for a fast action and positive feedback. There’s also full marks for the throttle response, which is fast, but never jerky. Below 2000rpm, the powertrain holds back but as soon as the torque wave rolls in, the M2 Comp seemingly reels in tarmac in almost any gear.

Sixth gear is a little too tall and aids economy on highway blasts, first has the 265/35 R19 rear Pirellis scrambling for traction, while third is spot-on for those twisty roads where the red mist descends. However, on a track, keeping both hands on the wheel with the DCT helps. So does the speedy, almost imperceptible, shift action. Ultimately, if you live in a country area, the DIY option is a real treat. Around town and on playful Sundays, the dual-clutch is the better bet.

Like every modern M-car worth a pinch of salt, this one comes with two M buttons on the steering wheel, which invite you to store your favoured setup. In addition, the shift speed of the DCT can be increased in three steps – from laid back to whack-in-the-back fast. There’s also a separate ESP switch, but everything related to driving dynamics is best grouped under the M1 and M2 mode selectors. And don’t forget to dial in MDM (M Dynamic Mode), which ramps up the entertainment while still maintaining a safety net. 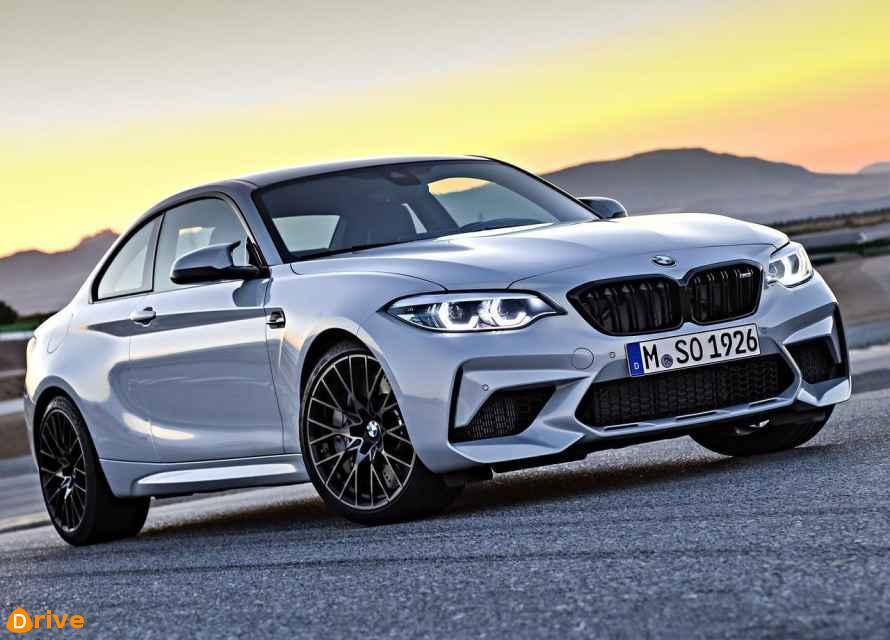 While the S55’s redline sits high for a boosted six at 7600rpm, anything more than 5250rpm – where the power and torque curves intersect – results in rapid responses. It also explains why we’re running on empty after only 290km in rural Spain. The M2 is shorter and narrower than the M4, but it’s only a token amount lighter. While this seems like a deficiency on paper, the reality is it hardly slows the Comp’s responses.

The racier M2 quickly proves that what stiffens up the front axle and the engine department is muscle, not fat. This acceleration is due to the trick active M differential, not just launch control. And that the huge amounts of speed carried through corners is the merit of the recalibrated chassis, not solely wider 245/35 R19 front boots. Okay, the ride comfort could be better, the cornering grip at the very limit varies with almost every surface and the rear-end feels positively squirmish when pushed.

The Comp also isn’t a fan of radical camber changes or cattle grids and is prone to tramlining. But this is an M product. Traditionally, they’ve never been mundane. Traction and roadholding depends largely on the tyre performance. It pays not to overdrive this M2. On a track, saving the front tyres helps improve cornering speeds once you are deep into double digits on the lap count.

Conversely, on the winding secondgear corners that snake up and down the Spanish hills, nursing the rear tyres makes all the difference. A similar wear pattern applies to the sport brakes, which will, after a while, also feel the stress and heat of repeated hard use. The absolute stopping power does not suffer a huge lot under pressure, it just takes a further stab to summon it and the pedal travel increases incrementally as the ABS remains alert.

Visually the Competition is anything but subtle. There is barely enough front bumper left to accommodate the multiple air intakes. We quickly stopped counting the numerous flares, spoilers and splitters, too. Among the more subtle bodywork upgrades are a wider grille, cooling slits, a fullwidth diffuser and a neat quad-tailpipe arrangement. Other bespoke items include restyled 19-inch rims and a owered suspension setting. Inside, the M2 is an M240i with a twist. 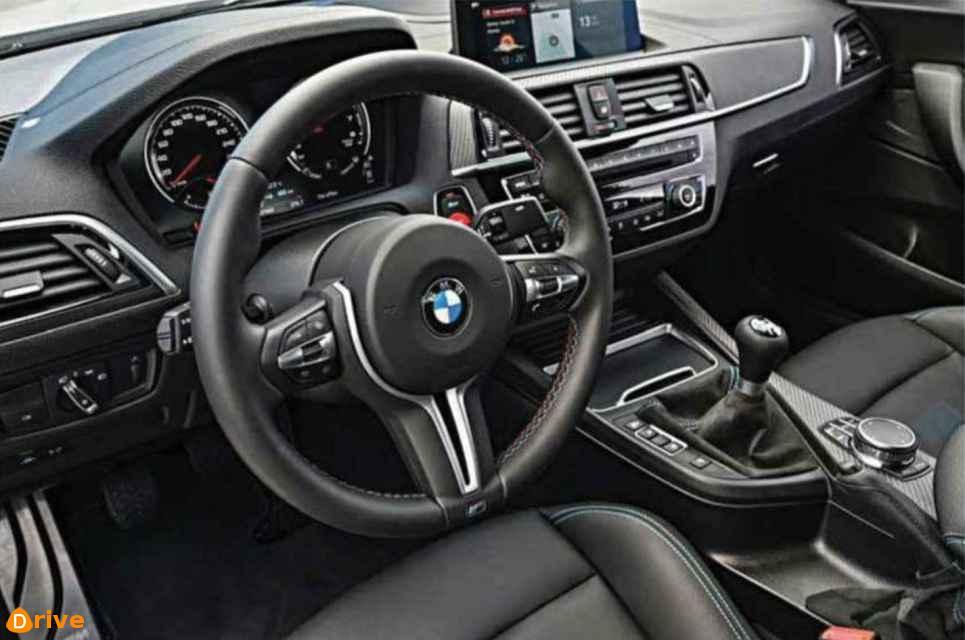 You get M2-badged seats, fresh digital instrument graphics and highergrade trim pieces, but the general cockpit design is unchanged – meaning it’ll feel dated soon. At the end of the day, the pumpedup M2 Competition is bound to shine on properly maintained Aussie country roads and will no doubt be a fan favourite through roundabouts and the odd highway on-ramp. And the decision between manual or DCT will largely come down to personal preference.

If you care about the stopwatch for pub banter, the selfshifter is two tenths faster than the manual to 100km/h, but it can’t match the tactility of the DIY experience. It all plays back into the inner head-versusheart debate that encapsulates the entire Competition premise. Your head says you should grab one of the first M2 Comps, run it for a year and then sell it. Worst case, you’ll come out of it with a small loss (or you could wait for the rumoured Pure version for a speculated sub-$100K).

After all, it costs about half as much as an M5, yet it’s about 85 per cent as rewarding. However, your heart might say grab an Alpine A110 instead and use the small change for a road trip. Although if the price was right, an even racier, twoseat M2 CSL would rule all. C’mon Mr van Meel, we know you want to…