An army, as the old saying goes, marches on its stomach. Napoleon Bonaparte coined that phrase, and he knew a thing or two about sipping burgundy while watching his troops on the march. And while it’s all very well trying to be macho and following the ‘blood, sweat and beers’ ethos of certain tuners who’ll tell you that creativity flows forth from smashing back a few cans, those are the people who’ll turn up to a show one day with mysteriously singed hair or their fingertips missing. No, the true heroes of the scene are fuelled by good ol’ cups of tea, stirring it with an oily spanner and refusing to wash the mug so that the inside of it looks like it’s crafted from rich mahogany. Furthermore, the heroes behind the heroes, as it were, are the ones who are constantly flicking the switch on the kettle and making sure there’s a ready supply of PG Tips in the caddy. People like Jordan Saunders’ nan, for example, who essentially fuelled the entirety of this RX-7’s build by keeping its owner and craftsman readily charged with an ever-present cuppa and the odd sandwich to boot. “My nan put up with a lot, having a pair of dismantled Mazdas on her driveway for months on end,” Jordan laughs. “But thankfully she makes a great cup of tea.” 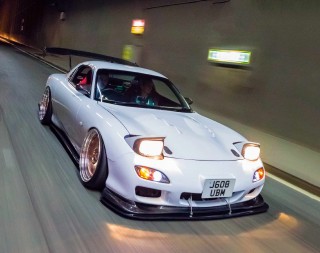 This isn’t the first time Jordan’s pulled the innards out of a Japanese car with the aim of making it faster and better, although it’s fair to say things have never gone quite this far before. Way back across the blinking time circuits, he started out with an EG Honda Civic, tearing it down and rebuilding it from first principles, swapping out the 1.5 for a B18, and it was in the course of planning a turbo conversion for it that he was struck by a lightning bolt. Not a literal one, of course, that’d be terrible; no, we’re obviously speaking fi guratively. Said lightning bolt was the rapidly dawning realisation that, at the tender age of 21, he’d be able to insure an RX-7. “Well, that was decision made,” he recalls. “As soon as I figured that out, the Civic was up for sale and I was searching for a Rex!”

After a little bit of hunting about, Jordan acquired himself a twin-turbo FD – the very one you see here, although it was rather different back then. Largely stock, it had simply been tickled with a set of coilovers and some fresh rims. Spec is largely irrelevant when you’re a 21-year-old in an FD of course, as the very fact that you’ve got such a thing at all is so obscene that it’s cause for constant jubilation. Until the bloody thing breaks, that is. Which it may well do. Jordan’s certainly did.

“It wasn’t long before the dreaded RX-7 issues arose,” he grimaces. “The sequential twin turbos were trouble – either they wouldn’t kick in when they should, or they were just very intermittent, thanks to the rats’ nest of vacuum lines and solenoids. I simplified all of that and thought I’d made it better, but it still wasn’t great. More drivable, yes, but definitely not right.” 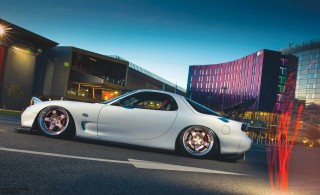 In addition to this catalogue of woes, Jordan had been having one or two issues with body image. The decision to fit a Feed-style widebody kit had necessitated cutting out the rear arches, although when he came to fit the air-ride, this turned out to be a bad move. First of all, though… air-ride on an FD?! Yep, this is full-on puristbaiting stuff, Jordan’s stellar mix of AirREX struts and Air Lift management leading to something that makes the finished product look totally badass while also really irritating the members of the various RX-7 owners’ clubs. But we digress – the FD was far from finished at this point…

“As soon as the air was installed, I could see I wouldn’t be able to achieve the fitment I wanted with the kit as it had raised the arch line up,” he laments. “To compound matters, I then had a bit of an incident with the temperamental turbos coming on boost unexpectedly and I, er, bent the car a little bit.” A lot of us would probably have considered huffily throwing in the towel at this point. Sure, it’s awesome to be able to acquire a bona fi de JDM tuner car at such a fresh-faced age, but the damn thing was clearly bloody cursed. Best to throw it in the bin and start again, eh?

But no, Jordan is made of sterner stuff. “I bought myself a rolling shell, and set about swapping everything across,” he says. “The engine and gearbox, loom, suspension, all of the interior and the dash… basically the whole car, it was a massive task, but it turned out to be a bit of a blessing in disguise. Luckily my nan was happy to let me turn her driveway into a scrapyard for a few months, keeping those cups of tea flowing the whole time.” 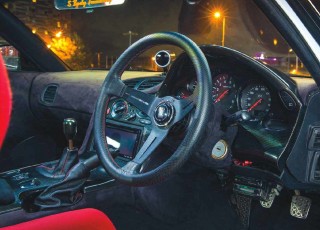 At this point, it’s worth addressing the elephant in the room: while reshelling the car sorts out those banged up bodywork issues, surely it’s a bit dumb to swap across an engine you know isn’t working properly? Fear not though, as Jordan is not dumb. Jordan is canny. And there was a plan afoot.

“While the car was in bits anyway, I opted to junk the twin turbo setup altogether to eliminate all of those issues, and while I was swapping the motor over I fitted a single-turbo kit, so that when I put my foot down it would just go,” he reasons. And go it certainly does – the turbo in question is a GReddy TD04, working in tandem with a custom exhaust system and HKS intercooler; the fuelling has also been massively improved and, while the car’s yet to be dyno’d, it’s safe to assume that it’s making somewhere in the region of 400bhp. Jordan’s happy to report that it does so with reassuring reliability too!

Anyway, back at the build, it was time to finally nail those aesthetics: “I found a set of SSR SP1s for sale,” he says, “and I figured out the spacing for the perfect fitment. Then the shell was off to BJ Miles Bodyshop for a full respray – the plan was to do all the prep myself and have Marc paint it, although I started to find a few iffy repairs from the car’s past and I was losing motivation with the sanding and all the filler, so I handed it over to him to sort it all out! The finish is perfect, and with the car back in new paint I set about bolting on all the carbon bits I’d been collecting, along with the ’99-spec front bumper.”

The mojo was well and truly kicking by this point, with JDMDistro delivering a set of Bride Zeta 3s; Jordan complementing their lurid red with the iconic green Takata harnesses. The interior was fully retrimmed in faux suede (“I wanted the Alcantara look without the price!”), various trim parts carbon-dipped to match the exterior carbon fibre, and a new set of wing mirrors were sourced as he really didn’t like the stock ones. He didn’t like any of the aftermarket ones either, so after a bit of lateral-thinking the car now sports a pair of Spoon items from a Civic, the original mirror mounting points now welded up and doing much to smooth out the car’s lines. 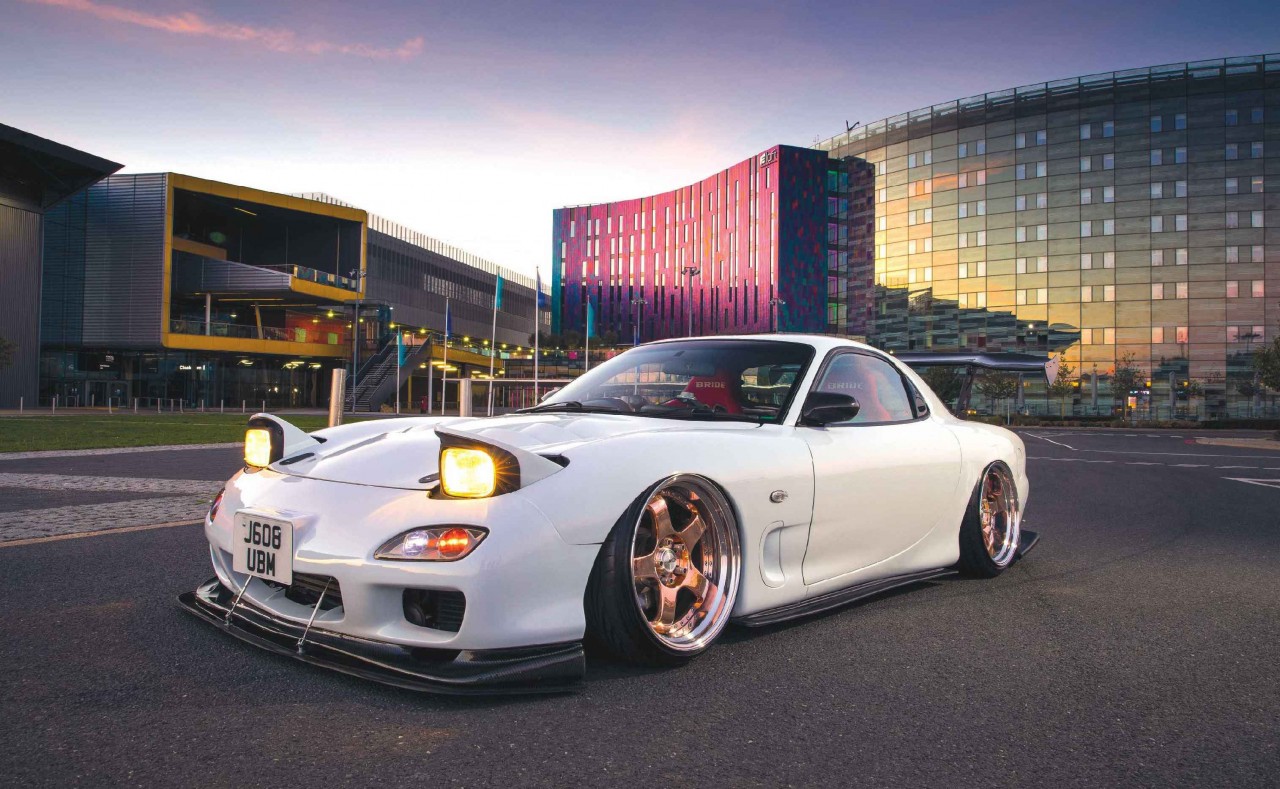 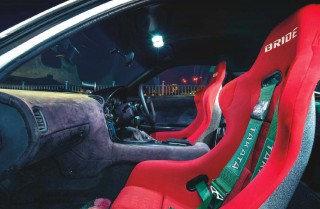 With more and more unique touches finding their way into the mix, Jordan was again struck by inspiration (don’t worry, still not a real lightning bolt, he’s fi ne) and decided to go all-in with the wheels: “I acid-stripped the centres of the SSRs and hand-polished them to be copper-plated, along with the harness bar inside,” he says. “This was at once one of the of the best and worst decisions I made, as copper tends to tarnish after a few days; it goes dull, and starts to turn purple and green when it gets wet, so I’m constantly polishing them. They do look amazing though!” We can’t help but agree, and it’s definitely worth the elbow grease. It may be a pain in the arse to keep looking proper, but that’s exactly why cars don’t have copper wheels. Jordan’s ticking a large box on the uniqueness front here.

As is the nature of projects like this, he’s constantly fiddling with it – just a week before our shoot, a new boot build was crafted to tidy things up with some killer hardlines, and we imagine some copper will probably be finding its way in there at some point too. After all of these years of problem-solving and hard graft, it’s great to finally be able to enjoy the RX-7 for what it was built for – hard driving, with oodles of boost and the scenery blurring at improbable speed – and it’s entertaining to leave the haters in his wake as Jordan tears for the horizon. Yes, there are people who are revolted by the idea of air-ride on an FD. Yes, his family have been laughing at his massive spoiler. But does he care? Hell no, Jordan’s having too much fun tearing about in one of the UK’s coolest RX-7s. Load him up with a cup of tea and he’s good to go. 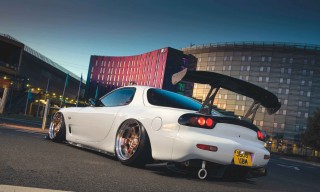 “I acid-stripped the centres of the SSRs and handpolished them” 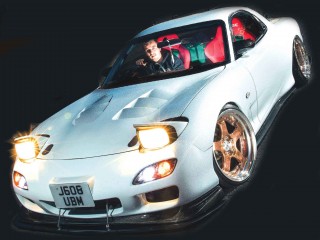 THANKS: I would love to say thanks to my nan for putting up with me on her drive and for her tea-making, Marc at BJ Miles Bodyshop for all my paint and bodywork, Dan, Harry, Darren, Jake, my dad, and all my other friends that helped out 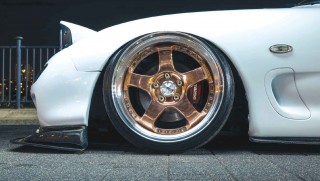 “While I was swapping the motor, I fitted a big single-turbo…”

“I acid-stripped the centres of the SSRs and handpolished them”